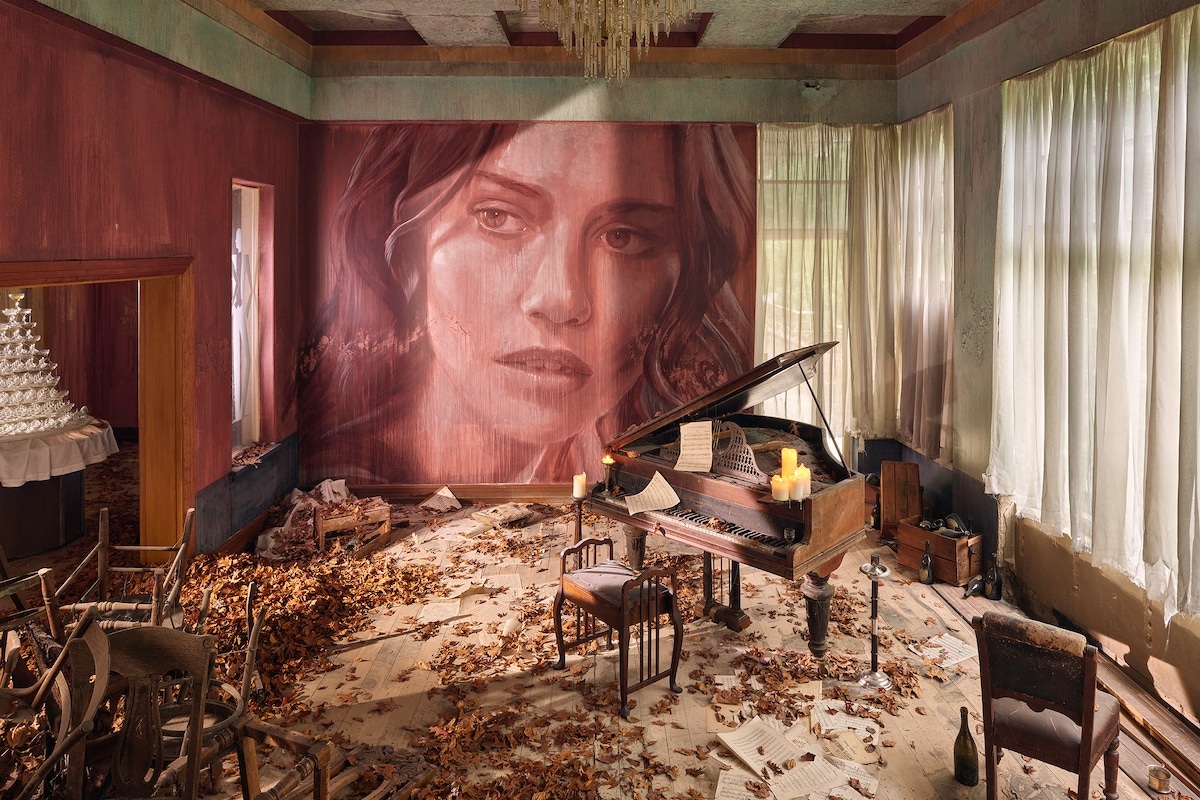 Australian artist Rone has taken his work to a new level with an immersive installation that brings his street art portraiture to the walls of an abandoned Art Deco mansion. Left vacant for 30 years, the sprawling Burnham Beeches mansion is the setting for Rone's ambitious project called Empire. Working for over a year, Rone and a team of interior designers, lighting specialists, and set designers helped create a multisensory experience that has breathed new life into the forgotten space.

Through twelve of the mansion's rooms, Rone's haunting portraits loom like ghosts of years past. Their eyes survey the scene, as each space is meticulously curated to create an environment that brings visitors back in time. Along with interior stylist Carly Spooner, Rone sourced over 500 antique pieces to help recreate the epic atmosphere of the mansion's past. Filling the Art Deco home with period style furniture proved to be the artist's biggest challenge, as everything had to work together in order for the mansion to look complete.

Each room is thematically linked to the seasons, from the deep burgundy walls of the dining area strewn with autumnal leaves to the pale violet walls of the bedroom that evoke a sense of springtime blossoms. To complement the visual experience, Rone brought in composer Nick Batterham, who created a soundscape based on a year's worth of recording ambient sound on the grounds of the mansion. Other flourishes include a bespoke scent design by Kat Snowden, lighting design by John McKissock, and botanical installations by Loose Leaf.

Visitors are invited to wander into the formerly decadent space and ponder what once was. The mansion, which was built in 1933 for a wealthy industrialist's family, certainly has many stories to tell. Through the detailed staging, it's impossible not to create a narrative as one walks through each room, guided under the watchful eye of Rone's female figures.

“I want people to walk in and feel like they can explore the possibilities of what might or might not have happened here,” Rone explains. “I love exploring the concept of how—and why—something so magnificent can be left to decline into ruin. Empire is about offering audiences the chance to create their own story; to temporarily transport their minds to another place, another time. It’s not often that you can be so fully immersed in another era like this. It’s almost like we’ve discovered a forgotten time capsule and cracked it open for the world to see.”

Empire is currently on view until April 22, 2019 at Burnham Beeches in Sherbrooke, Australia.

Street artist Rone spent over a year transforming an abandoned Art Deco mansion in Australia into an immersive art installation. 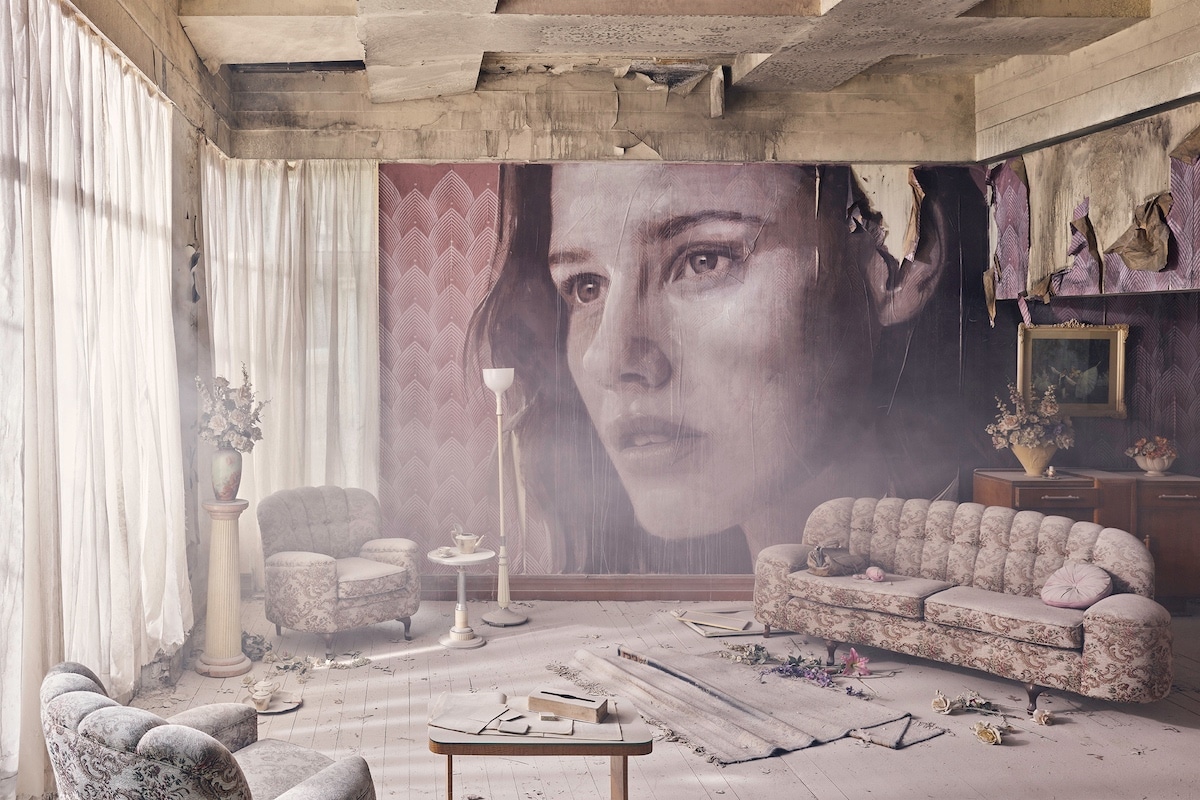 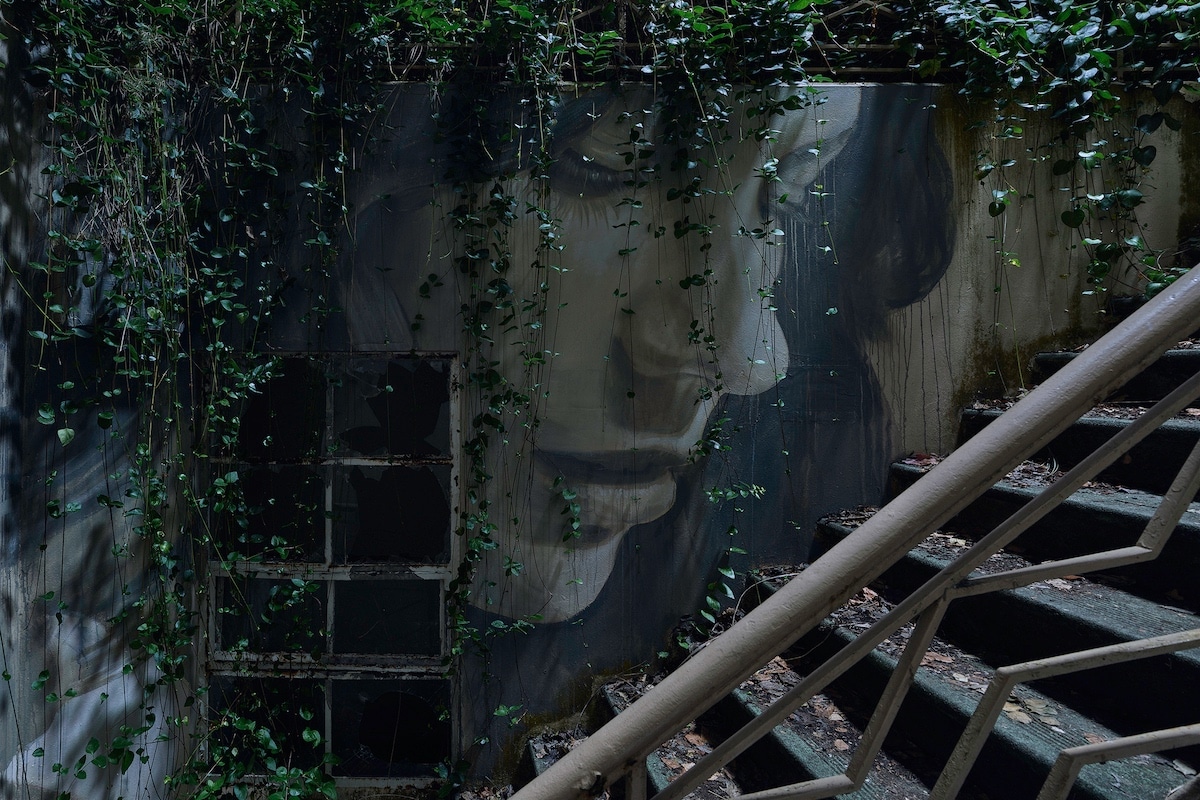 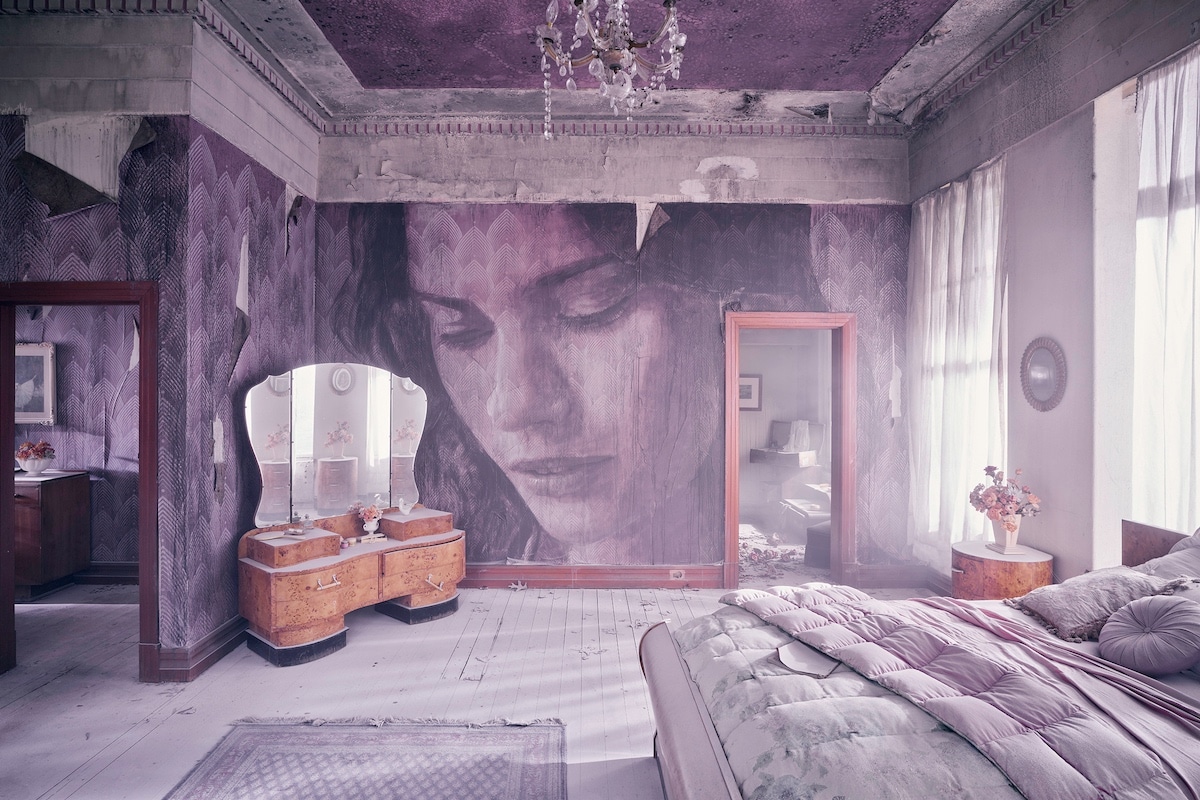 Over 500 antique furniture pieces from the 1920s and 1930s were sourced to create a cohesive ambiance. 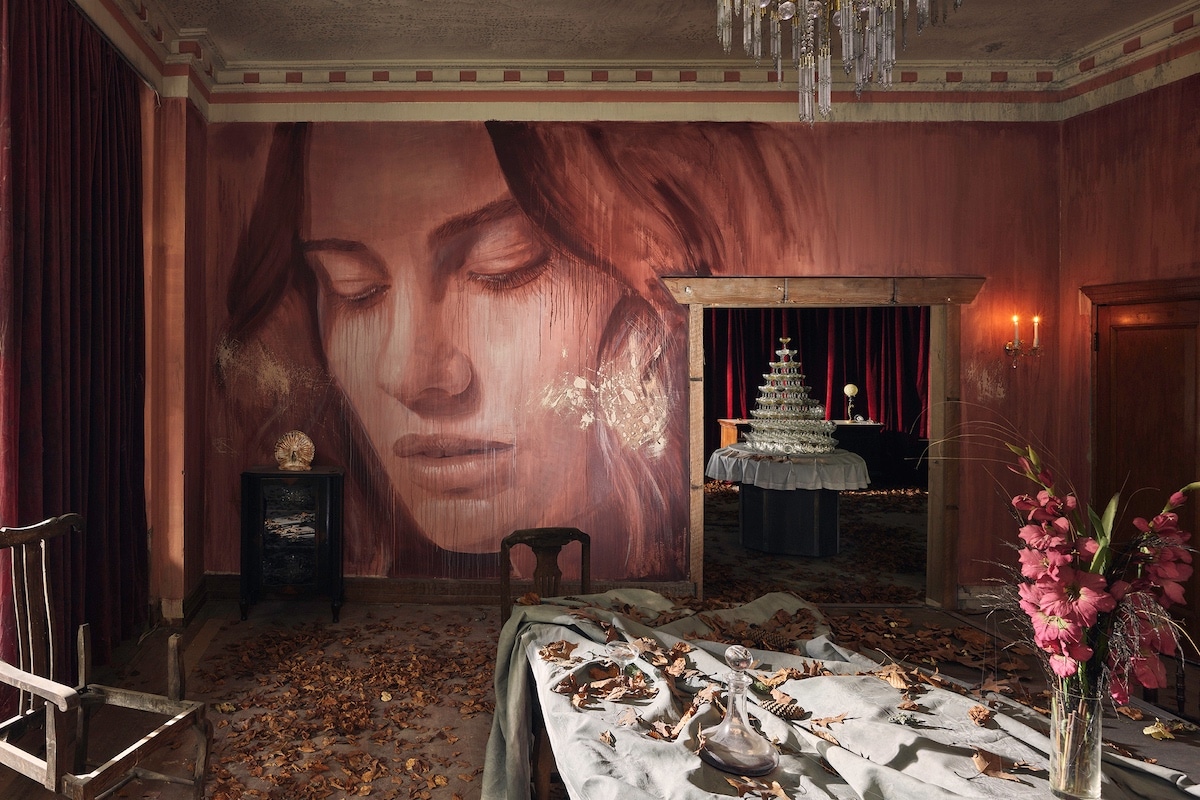 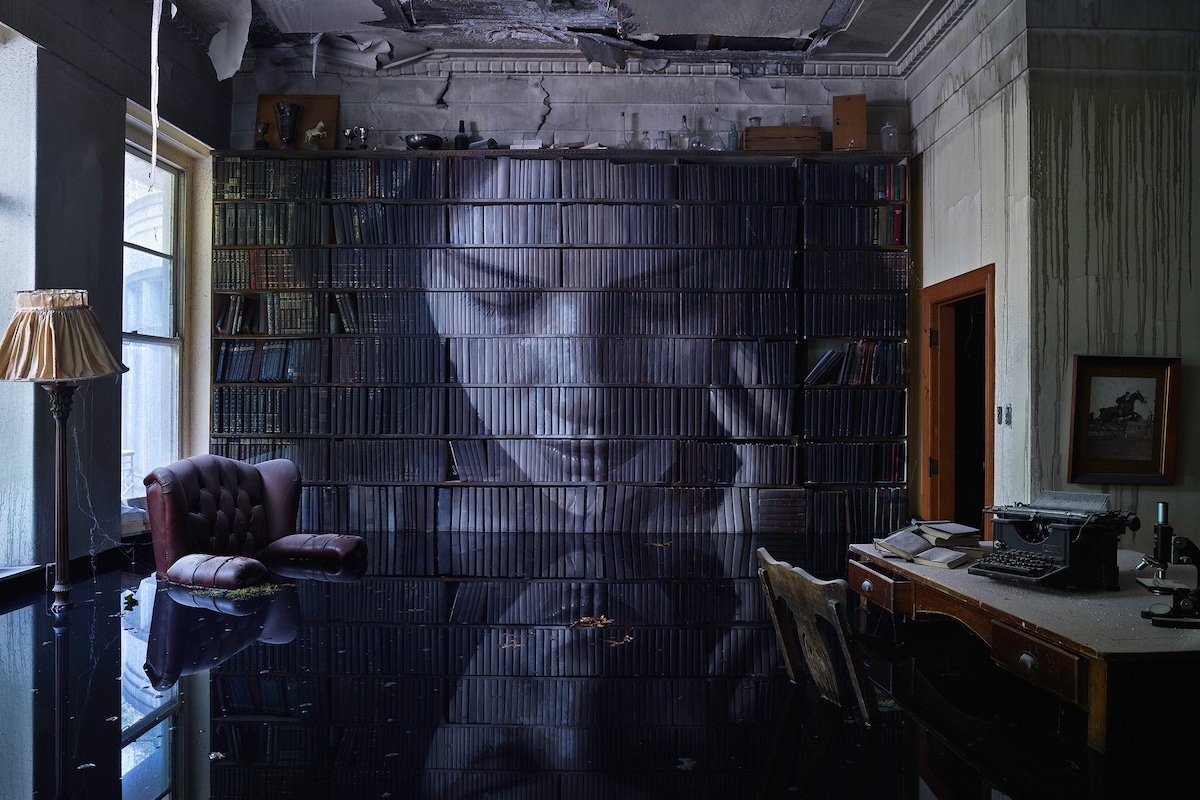 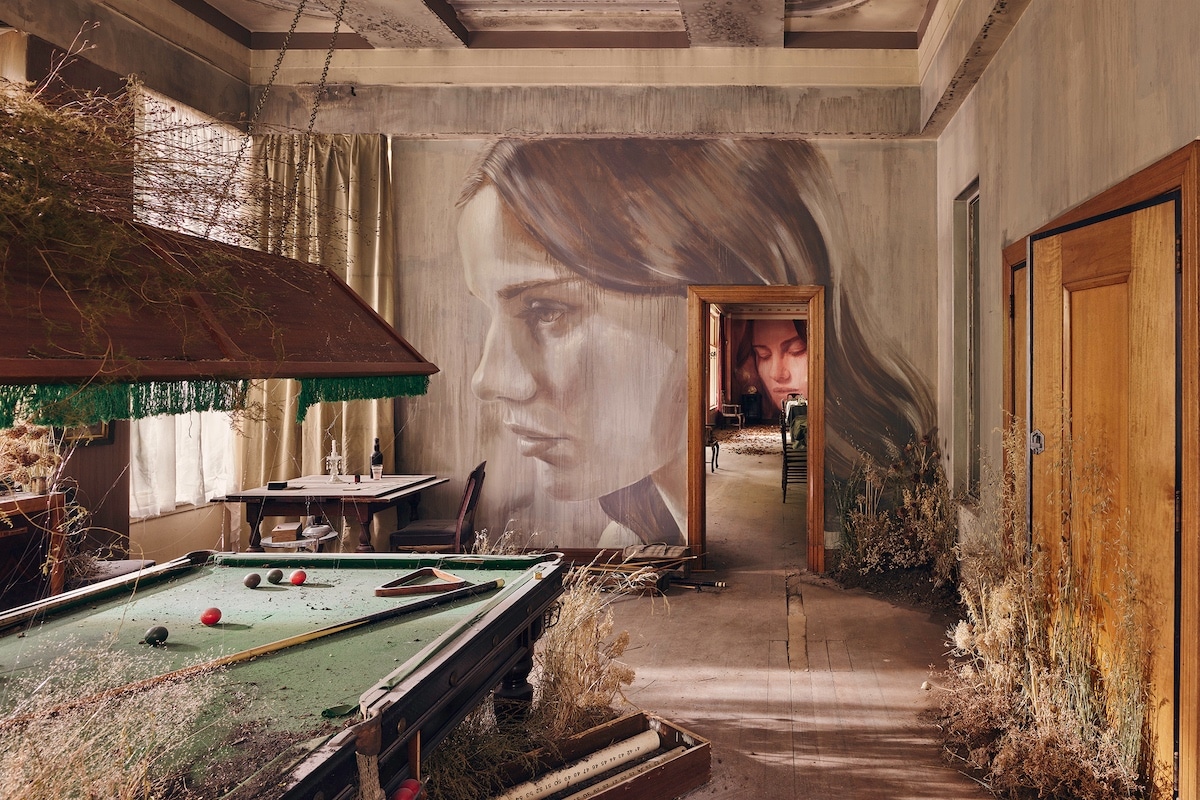 The twelve rooms are thematically linked to the four seasons with subtle hints that mark the passage of time. 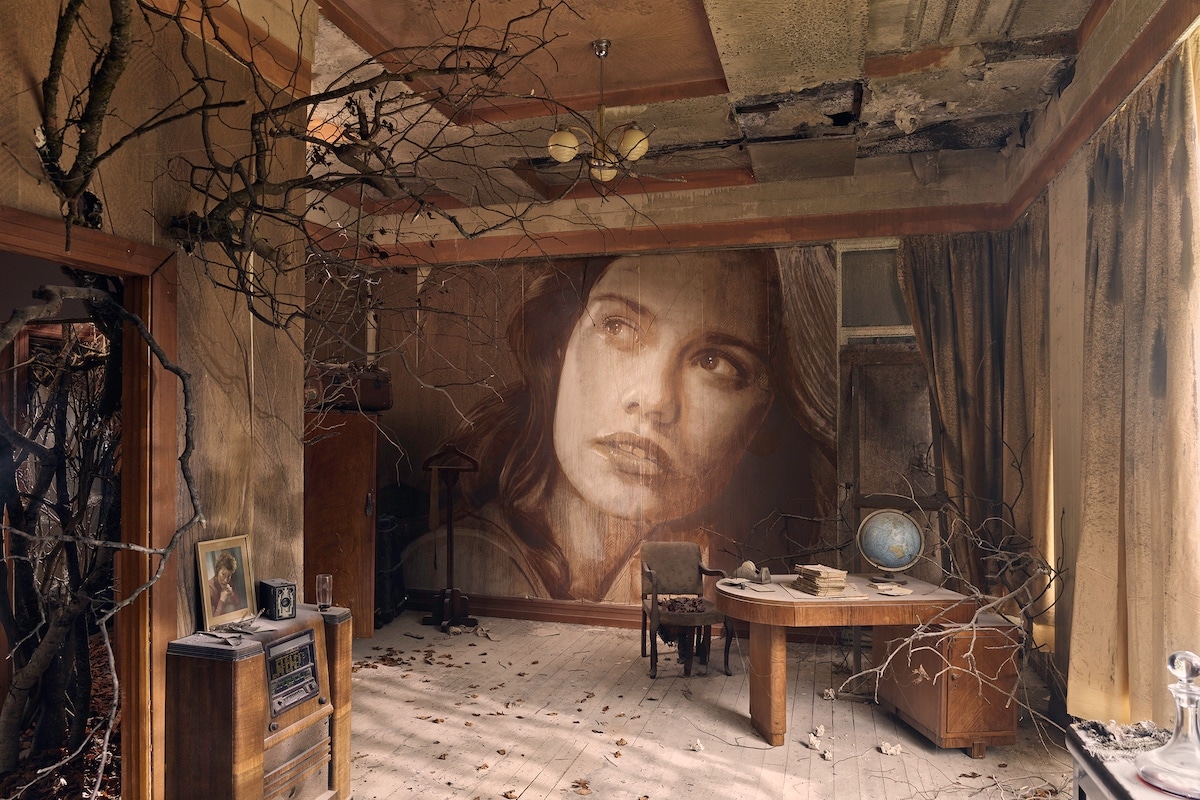 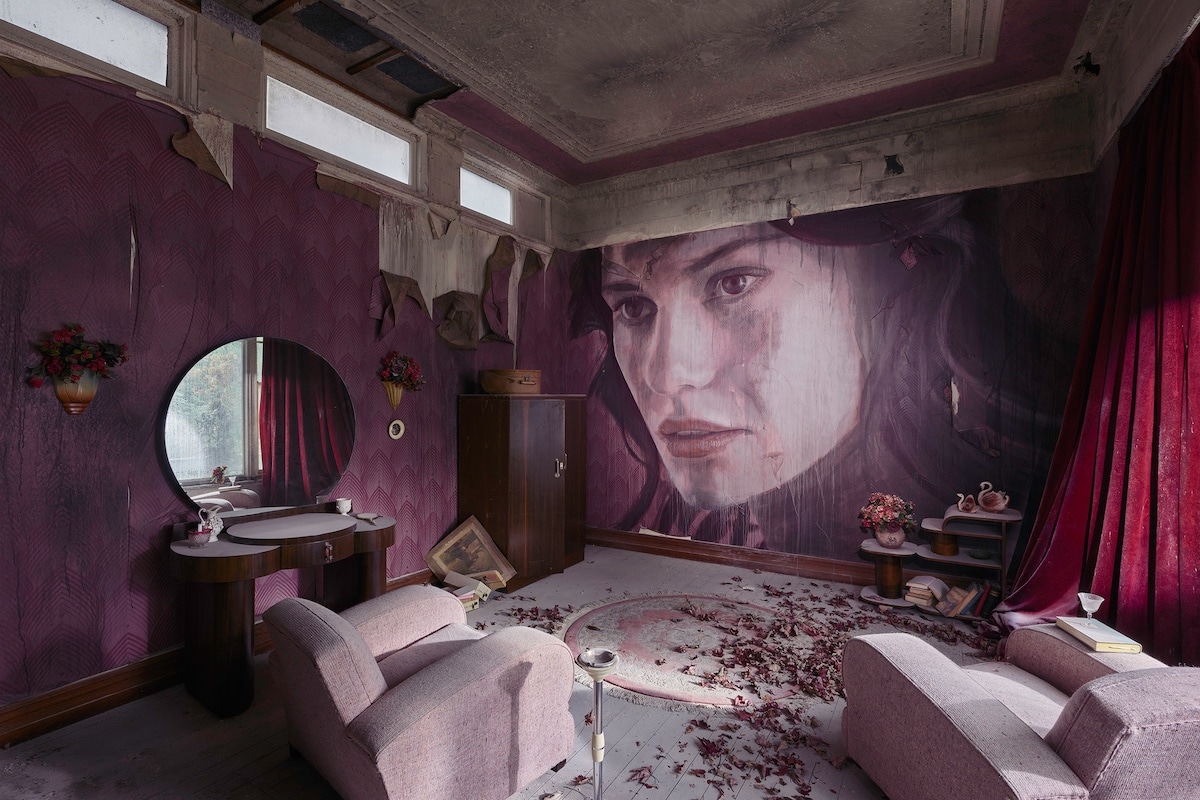 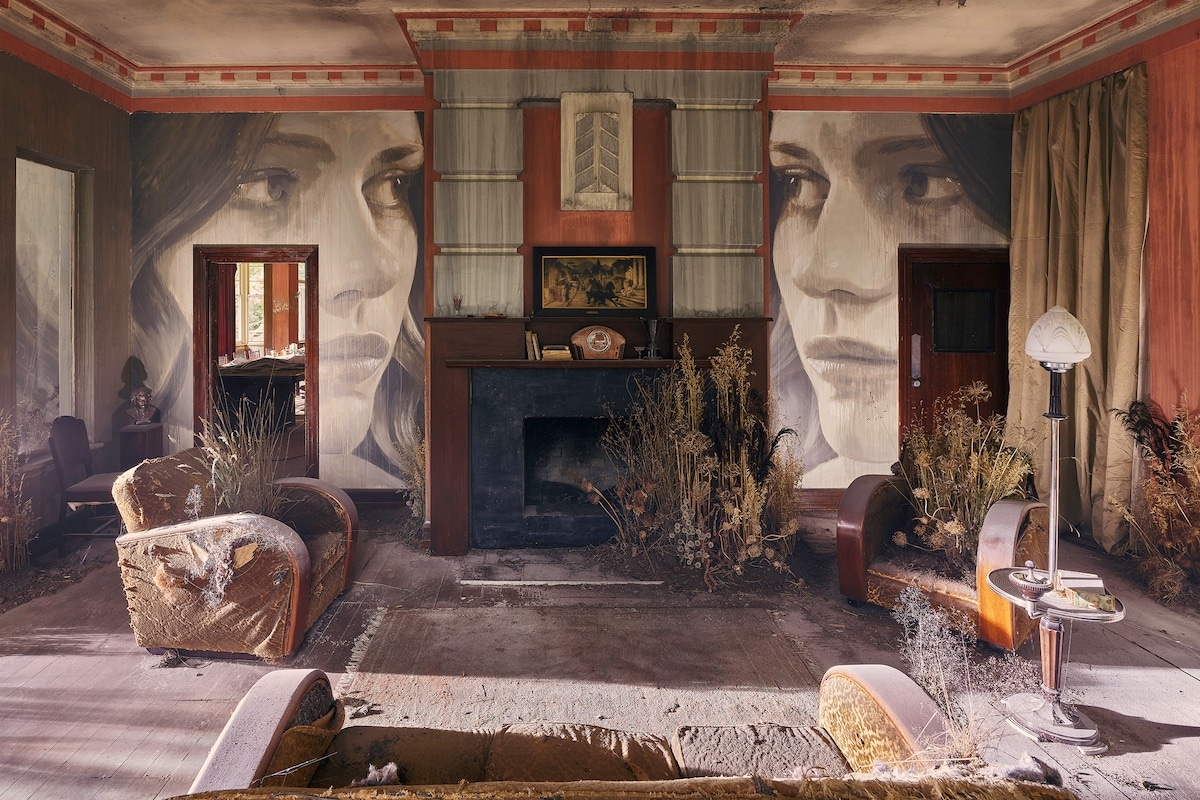 “It’s not often that you can be so fully immersed in another era like this. It’s almost like we’ve discovered a forgotten time capsule and cracked it open for the world to see.” 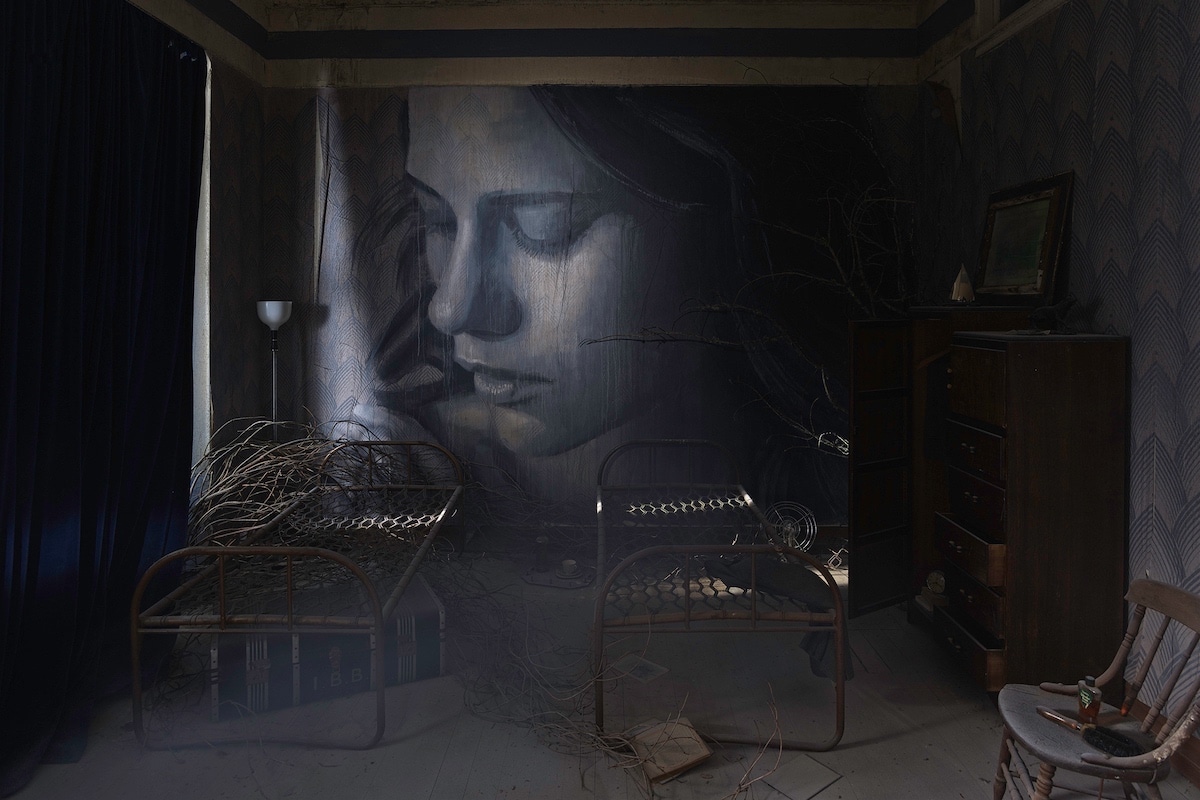 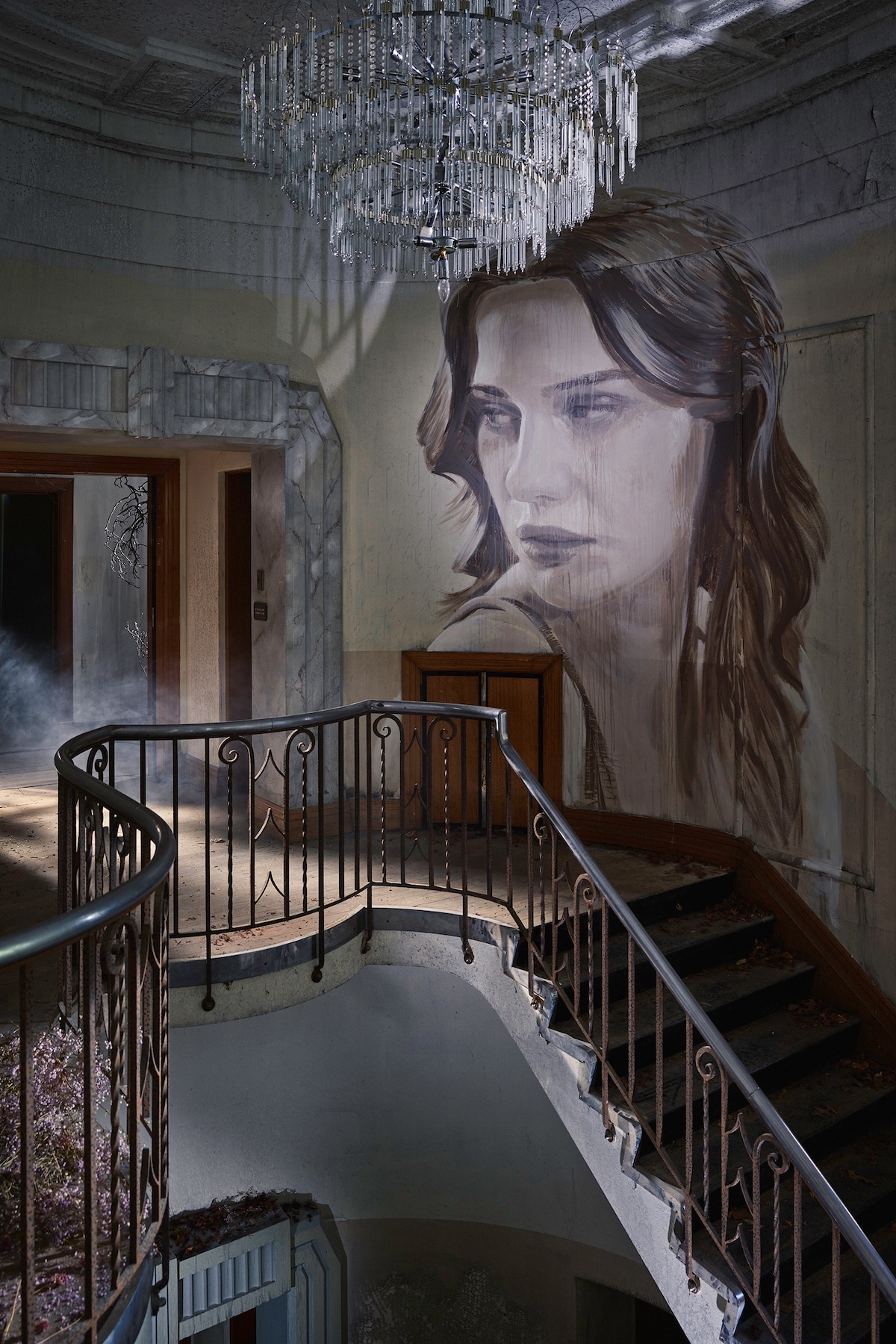 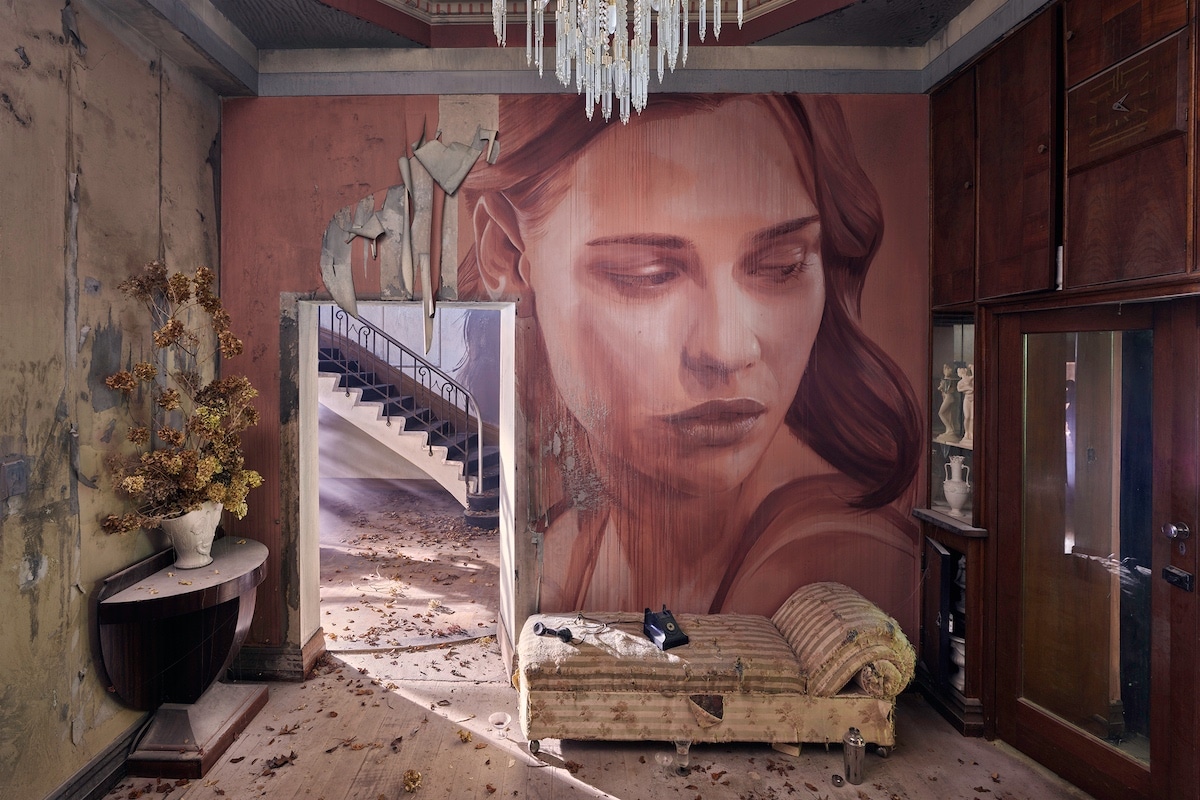 My Modern Met granted permission to use photos by Rone.

Intrigued by this immersive installation? Share
Like My Modern Met on Facebook
Get Our Weekly Newsletter
Become a
My Modern Met Member
As a member, you'll join us in our effort to support the arts.
Become a Member
Explore member benefits