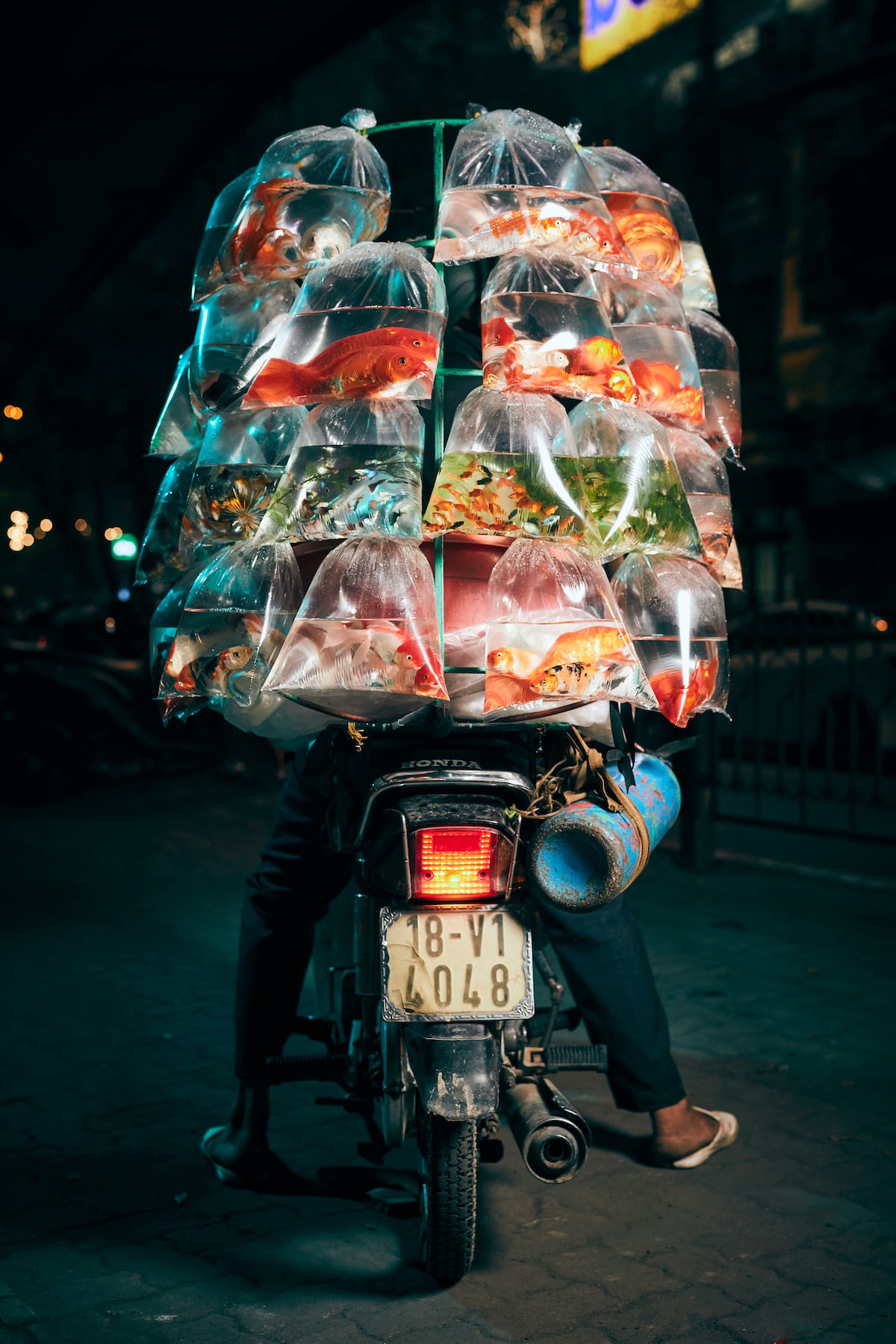 “A Fish Seller Displays His Goods” © Jon Enoch. Grand Prize Winner.
“A man poses with his scooter in Hanoi with a delivery of pet fish. The riders have an amazing ability to transport all kinds of goods in astonishing quantities. I spent a week chasing down riders and their cargos and convincing them to pose for the camera.”

The winners of the 17th Smithsonian Magazine Photo Contest show slices of life from around the world. From Vietnam to Antarctica, these photographers use their cameras to document important moments in time.

This year's winning, taken in Hanoi by British photographer Jon Enoch, is especially telling. Enoch traveled to Vietnam in order to capture the bikers who transport heaps of merchandise piled on their motorbikes. His photo of one driver expertly balancing pet fish on the back of his bike won him first prize. It's an image that crystallizes a tradition, one that may not exist for much longer. Hanoi has plans to ban motorbikes by 2030 to cut down on emissions, something that is wonderful for the environment but will certainly change how business gets done.

Other winning photographs focus on a different type of change, specifically environmental evolutions. Conor Ryan won the Natural World category for his striking photo of an Adélie penguin perched on an iceberg in Antarctica. As sea ice shrinks due to warmer temperatures, these penguins are losing their habitat. In fact, over the past 25 years, their population has shrunk by 65%.

Natnattcha Chaturapitamorn's winning photograph of an ice tower in Greenland tells a similar tale. Located in Disko Bay, the spire of ice is photographed as it reflects the beautiful colors of the sunset. The incredible aesthetics of the photograph, however, don't hide the fact that Greenland is experiencing record levels of ice melt. This could spell disaster for the island, which sees three-quarters of its land covered by this ice.

Check out more of the Smithsonian Magazine Photo Contest winners below; and, if you're interested, submissions are already open for next year's contest.

The winning photos of the 17th Smithsonian Magazine Photo Contest highlight life around the world. 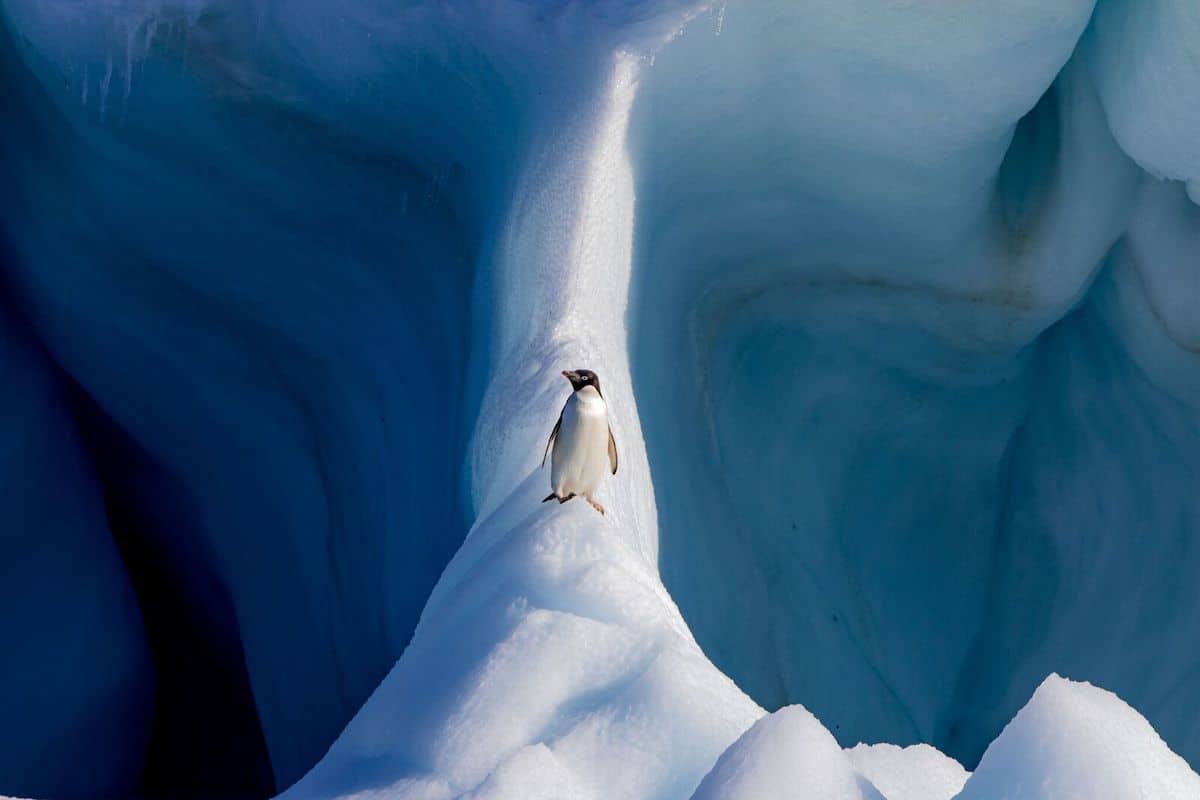 “Adélie Penguin on an Iceberg” © Conor Ryan. Winner, Natural World. “Ice-dependent animals are in perilous danger of losing their habitats. This photo shows an Adélie penguin standing on an iceberg off Devil Island, Antarctica. I like how the half-lit, sea-eroded iceberg gives the scene a sense of dichotomy. Perhaps the penguin's indecision on which way to go, or perhaps ours.” 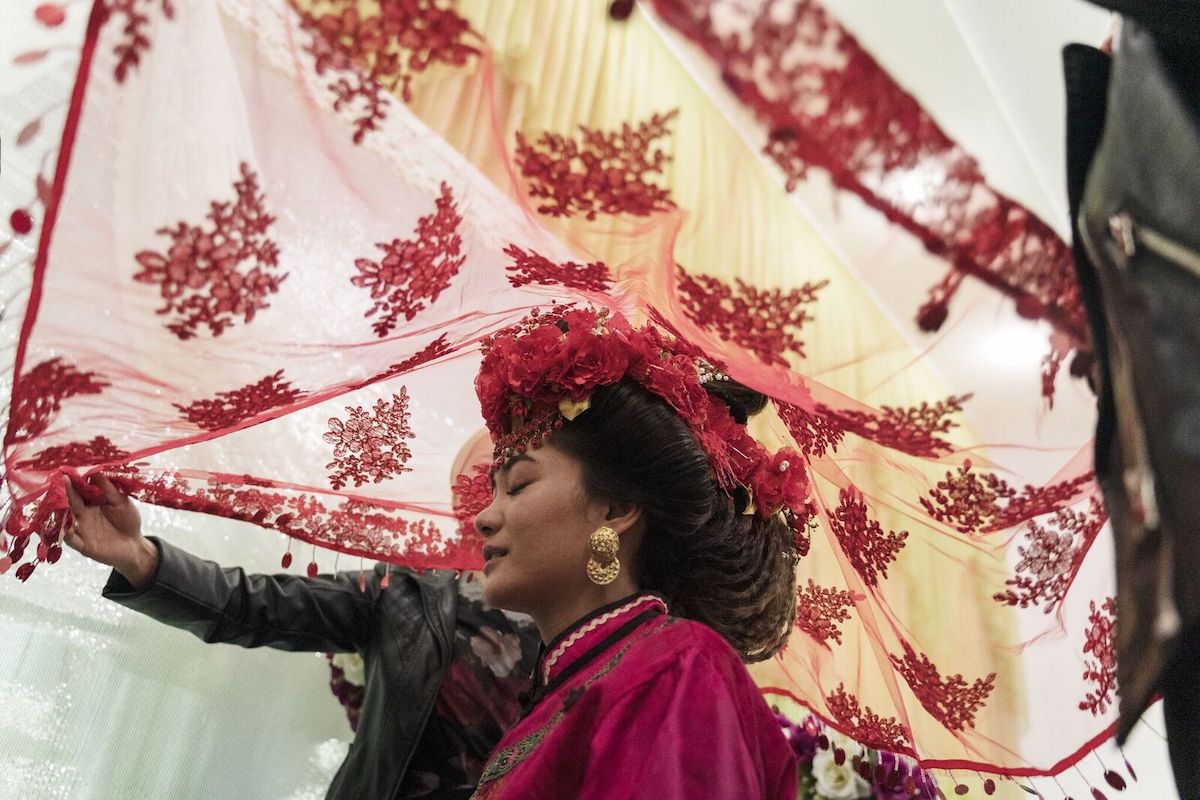 “Dungan Wedding” © Yam G-Jun. Winner, People.
“Madina, 20, an ethnic Dungan, is covered by a red veil before she leaves for the groom’s house during a wedding ceremony in Milyanfan, Kyrgyzstan. Dungans wear traditional Chinese-influenced wedding gowns, follow traditional Hui Chinese wedding ceremonies from the 19th century and practice endogamy, but due to shrinking population size, they have stopped the practice and allowed Dungans to marry other ethnicities.” 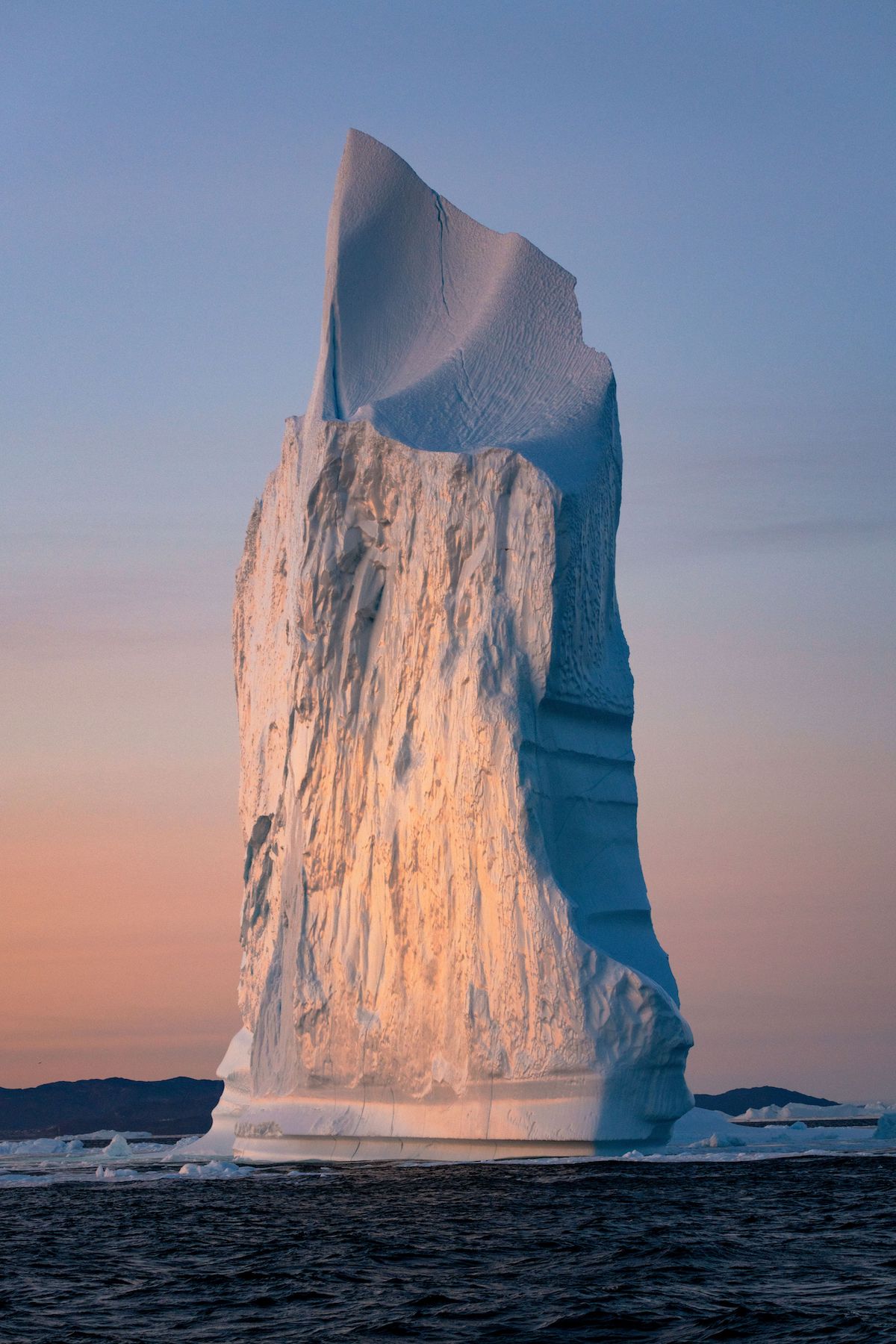 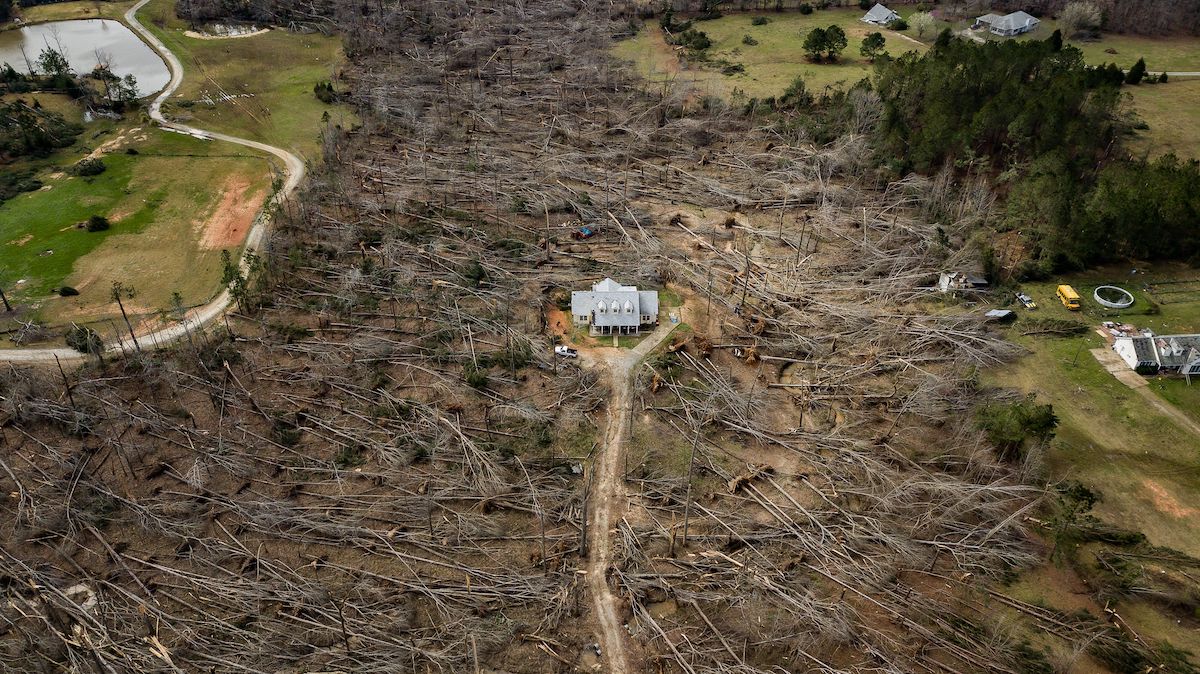 “Home Survives Direct Hit From Tornado” © Matt Gillespie. Winners, Reader's Choice.
“This home was in the direct line of a tornado that hit Ellerslie, Georgia. Most of the trees on the property had fallen, but the house stood with minimal damage.” 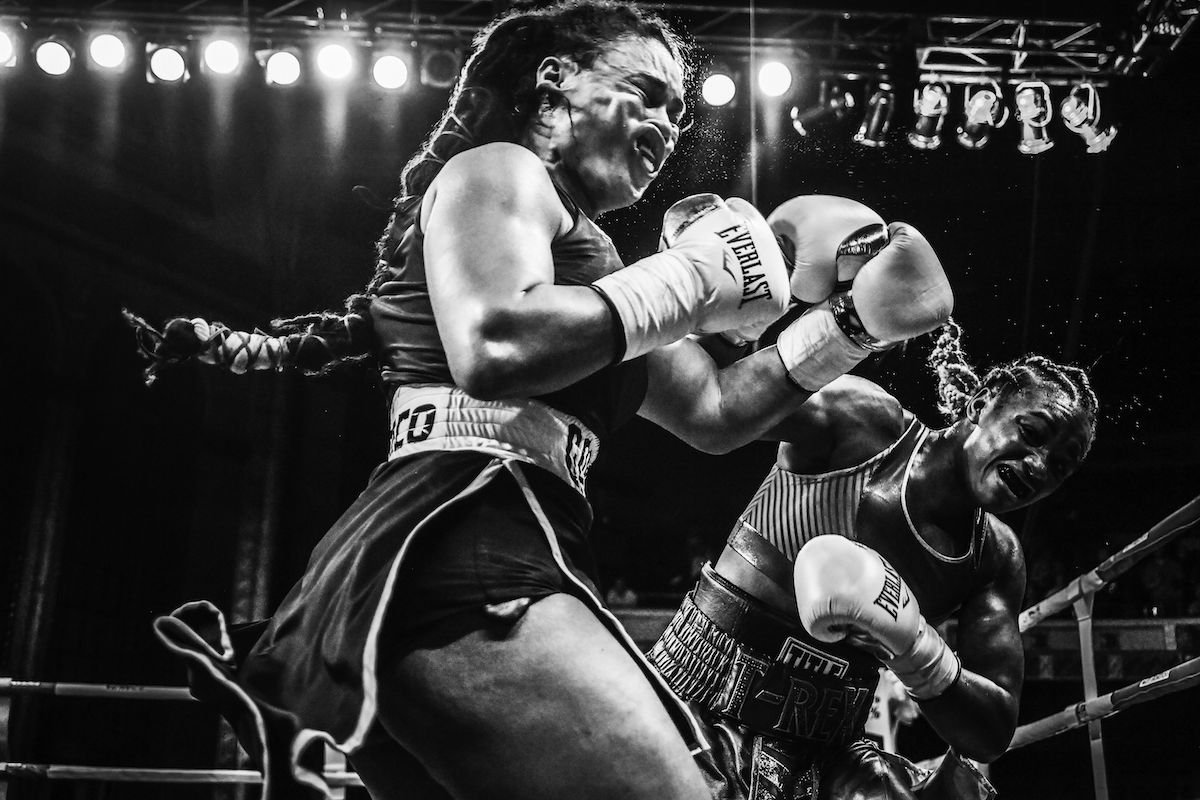 “Shields Strikes Back” © ​Terrell Groggins. Winner, American Experience.
“Olympic champion Claressa Shields (right) meets Hanna Gabriels in a boxing match at the Masonic Temple in Detroit, Michigan on June 22, 2018. Shields suffered a first-round knock-down by Gabriels—the first time that had happened in Shields' career—but went on to win the match by unanimous decision. Shields is the first American woman to win an Olympic gold medal in boxing, and the first (male or female) to win a gold back-to-back in successive Olympic Games.” 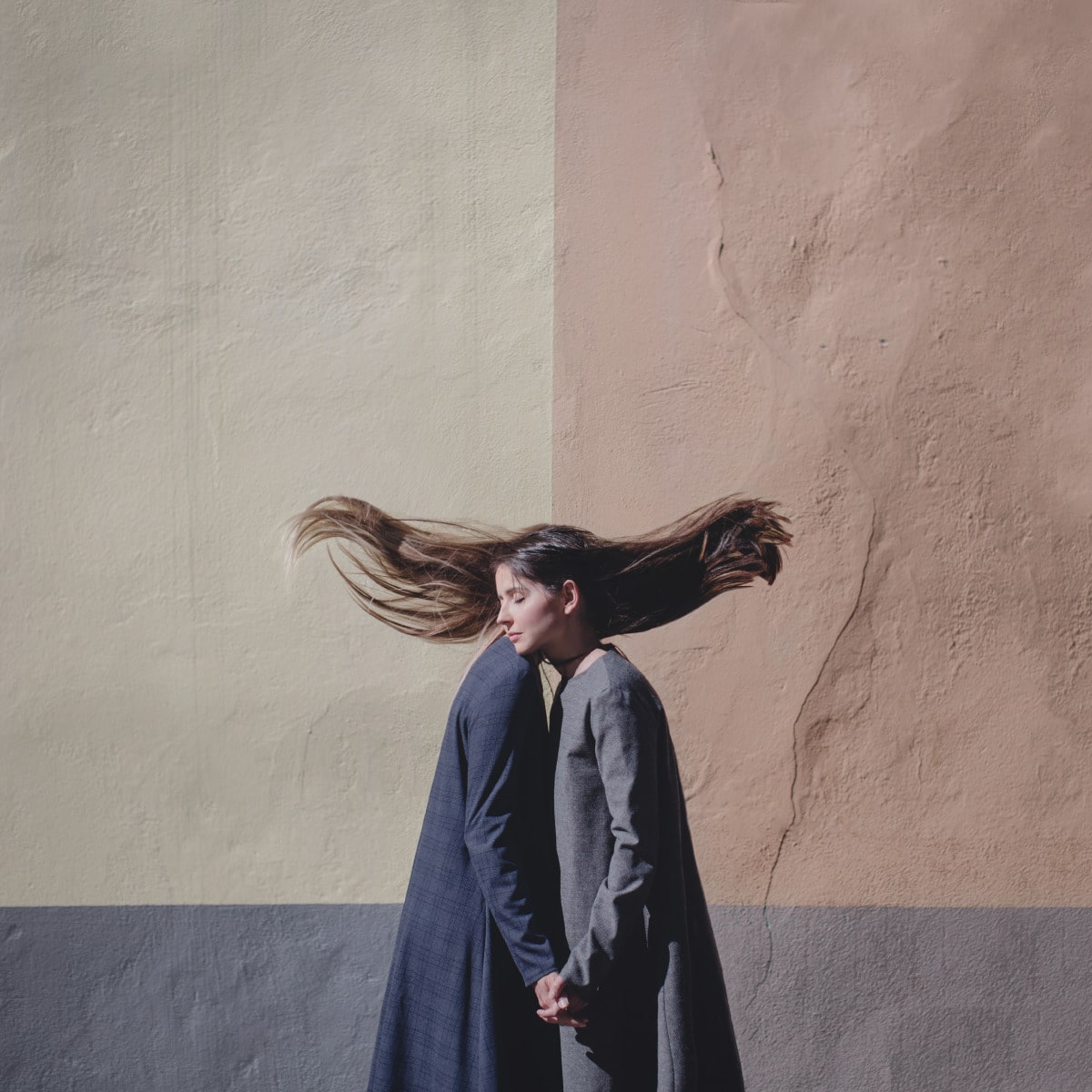 “Me and Myself” © Dasha Pears. Winner, Altered Image.
“We all experience an inner dialogue. We have a mental image of ourselves that we are talking to almost every moment of our life. We discuss just about anything: hopes, troubles, Sunday shopping, memories from the past, what the person standing next to us thinks about us. Every person’s identity is split into two parts, “me” and “myself.” The project is exploring the interactions of these two different sides of the same person and idea of the duality of a human mind and self-discovery. Often, one of these parts is our inner critic, the one that comes up with all the fears, excuses and negative thoughts. This “me” can make us fail at anything since this voice will never be happy. It’s the job of the other part, “myself,” to recognize the negative delusion and turn it into healthy, positive thoughts, bringing peace to our minds.” 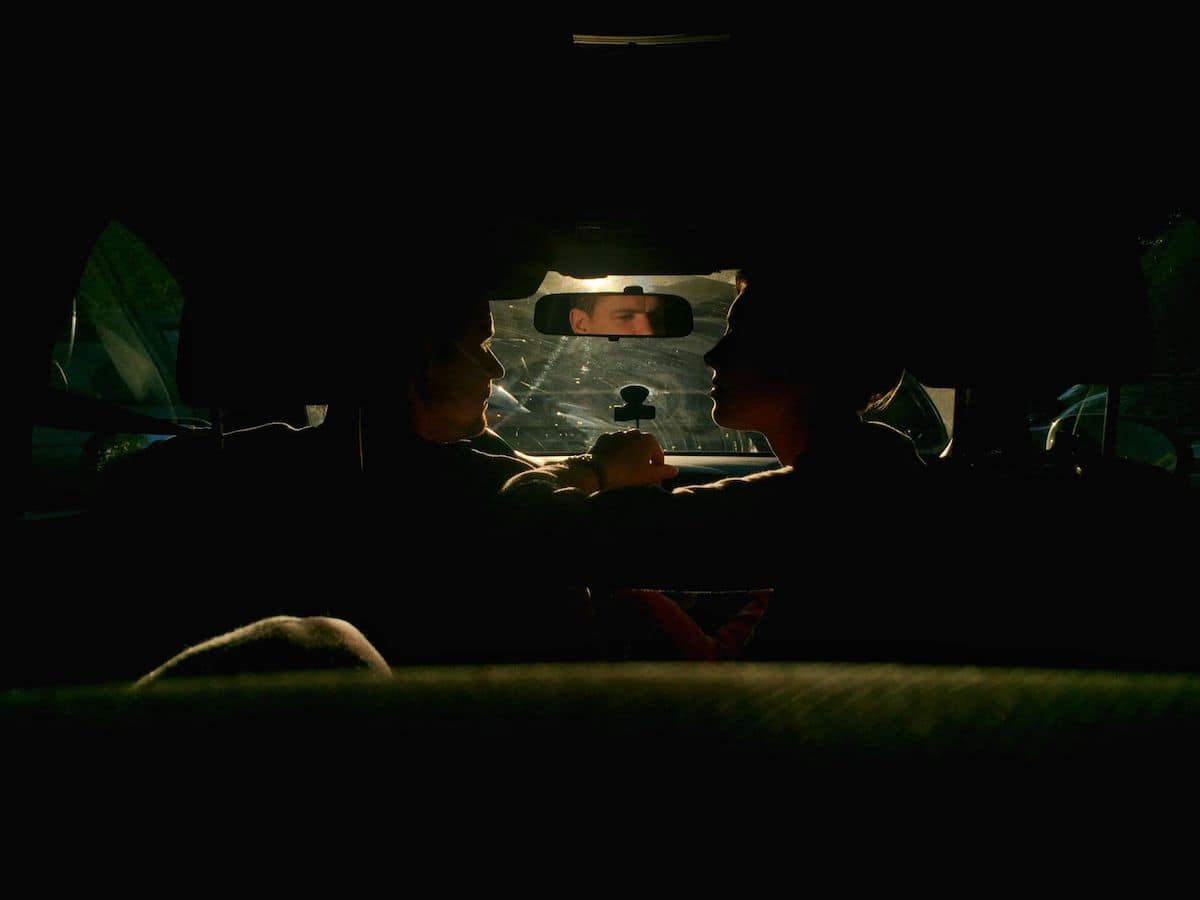 “At Sunset” © Victoria Gorelchenko. Winner, Mobile.
“I was waiting for my husband in the parking lot and noticed this beautiful light.”

Like the winners? Share
Like My Modern Met on Facebook
Get Our Weekly Newsletter
Become a
My Modern Met Member
As a member, you'll join us in our effort to support the arts.
Become a Member
Explore member benefits 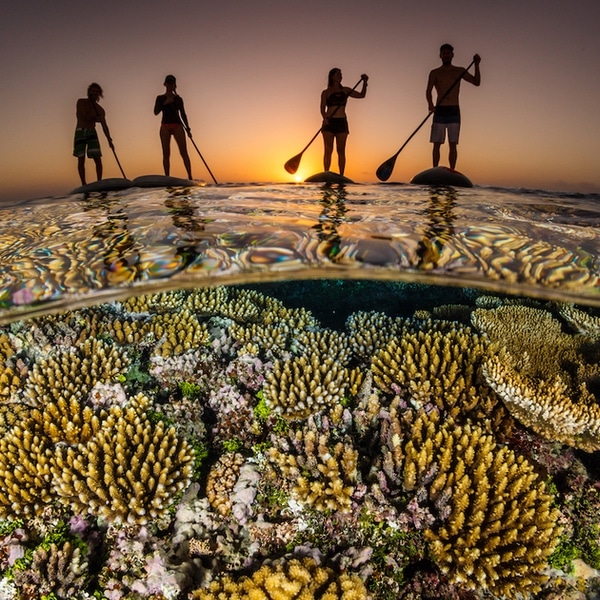 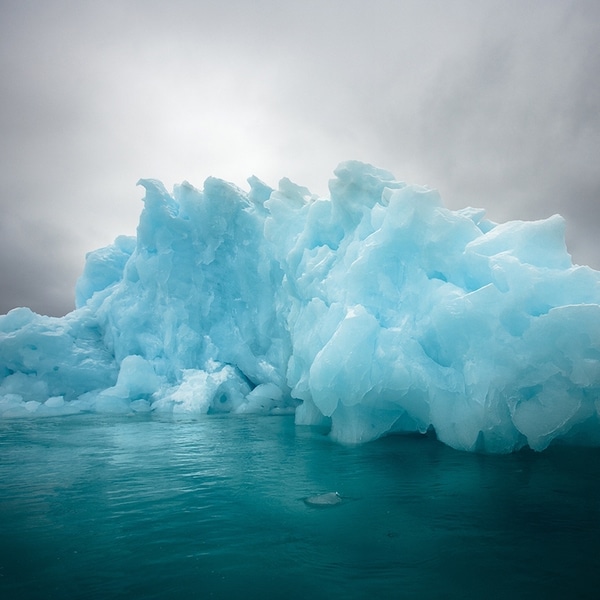 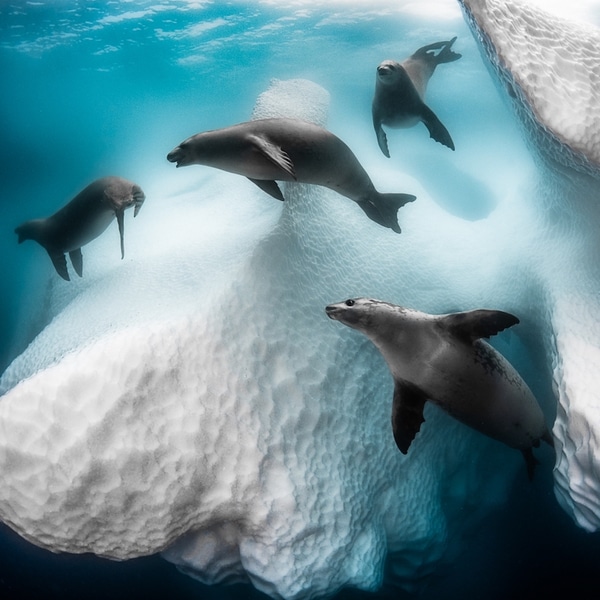 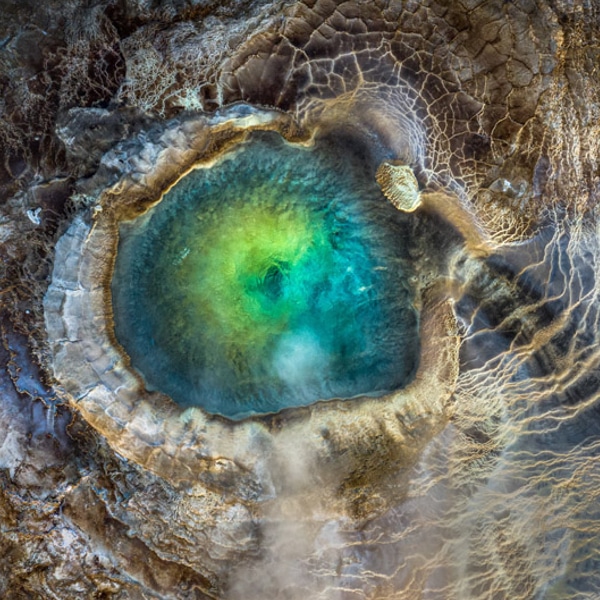 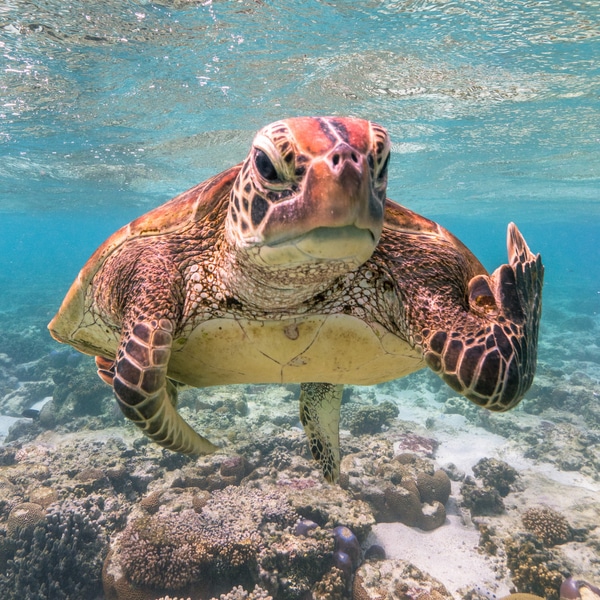