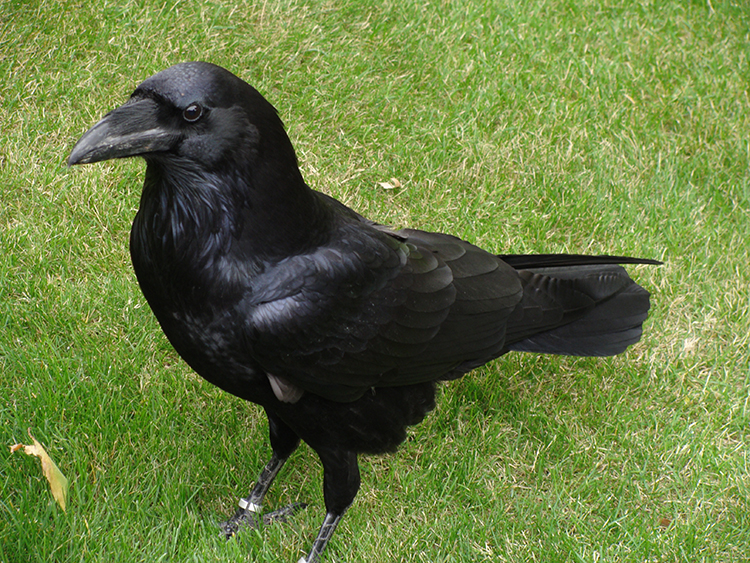 A common raven at the Tower of London. (Photo: Wikimedia Commons [CC BY-SA 4.0])

Ravens are fascinating birds. The sleek black creatures with sharp beaks are mentioned in the Old Testament, Native American historical traditions, and Edgar Allen Poe's famously haunting poem The Raven. One reason ravens have long fascinated is their obvious intelligence. They are known to hoard and use objects as tools, and to work in pairs to find food. However, until recently, avian intelligence received much less scholarly attention than that of the great apes. A new study published in Scientific Reports is seeking to broaden approaches to studying animal cognition by focusing on ravens. Remarkably, the researchers discovered that ravens as young as 4 months old can perform as well on cognitive tests as adult orangutans and gorillas.

Under the lead authorship of Professor Simone Pika, a team from the Osnabrück Research Group for Comparative BioCognition (CBC) set out to conduct the first true comparative evaluation of ravens’ cognitive abilities. Eight young ravens were hand-raised for the study. Each was tested using a version of the Primate Cognition Test Battery (PCTB) which was adapted from apes (with fingers) to ravens (with beaks). The test was repeated at four, eight, 12, and 16 months for each avian subject. The physical components of the PCTB tested cognitive functions such as the bird's spatial awareness and ability to understand object permanence. The social components measured communication and learning abilities.

The researchers measured the bird's cognitive abilities at each stage, as indicated by the standardized PCTB. After gathering this data, the avian results were compared to those of gorillas and orangutans using the same measure. By 4 months old, the fledgling ravens were already cognitively comparable to adult primates—especially with respect to problem solving abilities. The ravens understood quantities, grasped causation, and showed social learning on par with the formerly studied apes. According to the researchers, this demonstrates social and physical intelligence and “general rather than domain specific intelligence.” The paper suggests that ravens—who achieve early independence from their nests—might require this intelligence for survival at such a young age. There is also the possibility that being raised by humans had socialized the test subjects so that the results of wild young ravens may differ.

The team hopes to continue their research into raven intelligence—particularly by developing metrics to evaluate “true species-specific, rather than human-specific, cognitive skills.” In other words, within the raven's realm of cognition, what does it mean to be smart?

Ravens are known to be intelligent birds, but a new study has shown that juvenile ravens may be just as cognitively impressive as adult great apes.

A team of researchers administered cognitive tests comprising assessments of physical and social intelligence to eight young ravens at four different points in their development.

With quantities, problem solving, spatial skills, and learning abilities, the ravens proved they have a broad range of cognitive abilities which were previously undocumented.