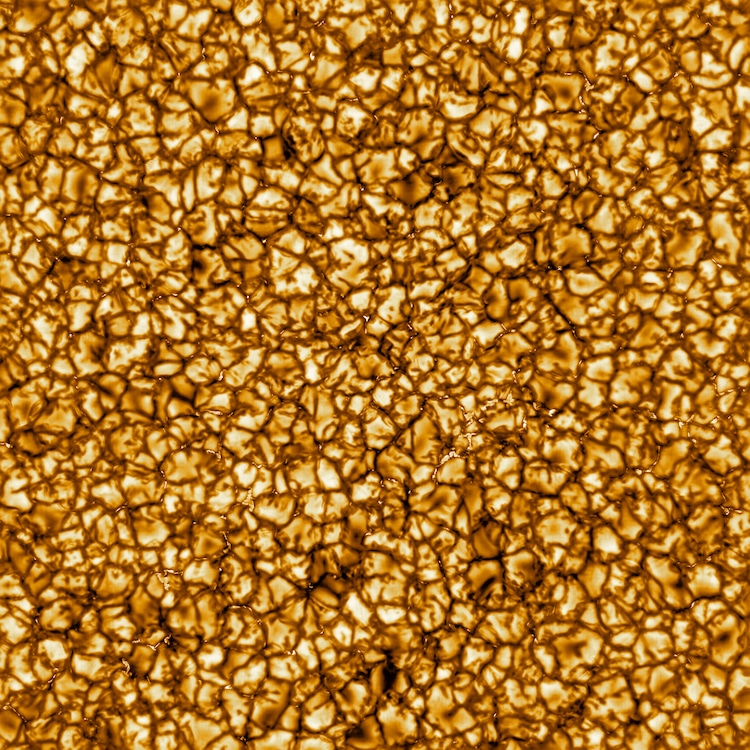 We all know that the Sun is essential for life on Earth, but there's still a lot we're learning about the star at the center of our solar system. And thanks to new technology, we're now able to get an even better glimpse of the Sun. In a newly released image from the National Science Foundation’s Daniel K. Inouye Solar Telescope it's possible to see the Sun's surface closer than ever before. This close-up view will enable scientists to gain new knowledge about how weather systems work on the Sun.

The incredible image looks like scorched earth and was taken from 789 nanometers. For the first time, thanks to this innovative technology, we're able to see objects as small as 18 miles. So what are we looking at here? The crackling field is actually a pattern that the boiling gas that surrounds the Sun has created. To give a sense of scale, each individual cell-like structure is actually the size of Texas.

The light and shade in the image are indicative of the gas's violent movements. Bright spots appear when the hot solar material is rising up. As it cools and sinks in a process known as convection, it forms dark lanes. It's in these dark lanes that we're also able to see bright markers of magnetic fields. “Never before seen to this clarity, these bright specks are thought to channel energy up into the outer layers of the solar atmosphere called the corona,” states the National Science Foundation. “These bright spots may be at the core of why the solar corona is more than a million degrees.” 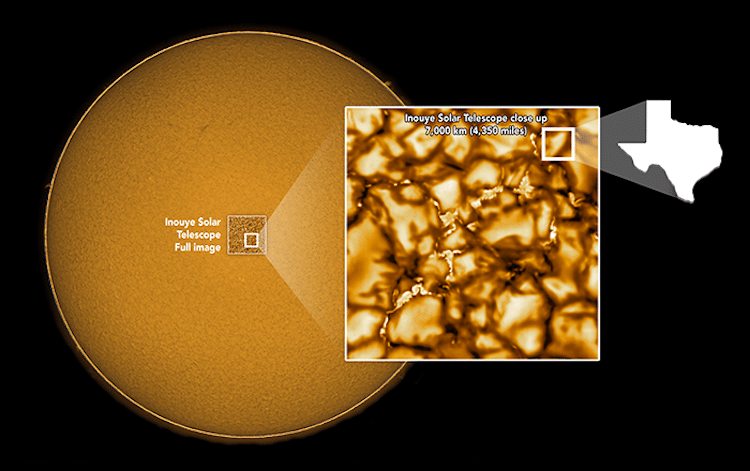 The photo is an incredible triumph for the largest solar telescope in the world. Placed on the summit of Haleakala, Maui in Hawaii, it has an unparalleled vantage point that allows its 13-foot mirror to work its magic. As the telescope generates an incredible amount of heat—13 kilowatts—a specialized cooling system was engineered to protect the telescope. In fact, seven miles of pipes are required to distribute coolant throughout the observatory.

The Inouye Solar Telescope will continue to study the Sun in the coming decades, allowing researchers to unravel mysteries around its weather. In turn, this will allow governments to better prepare for possible future weather disasters. By being able to better predict solar storms, we'll also get more advance notice of impending bad weather. Currently, there are only about 48 minutes of advance notice of these events. This could leap to 48 hours thanks to this new technology, which would allow for more time to secure power grids and satellites.

“These first images are just the beginning,” said David Boboltz, a program director in NSF’s Division of Astronomical Sciences who oversees the facility’s construction and operations. “Over the next six months, the Inouye telescope’s team of scientists, engineers and technicians will continue testing and commissioning the telescope to make it ready for use by the international solar scientific community. The Inouye Solar Telescope will collect more information about our sun during the first 5 years of its lifetime than all the solar data gathered since Galileo first pointed a telescope at the sun in 1612.”

⁣See the Sun like never before! ⁣#SolarVision2020 ⠀ NSF’s Daniel K. Inouye Solar Telescope produces the highest resolution image of the Sun's surface ever taken. ⠀ In this movie, you can see features as small as 30km (18 miles) in size for the first time ever. The movie shows the turbulent, “boiling” gas that covers the entire sun. The cell-like structures — each about the size of Texas 🤯 — are the signature of violent motions that transport heat from the inside of the sun to its surface. ⠀ Hot solar material (plasma) rises in the bright centers of “cells,” cools off and then sinks below the surface in dark lanes. In these dark lanes, we can also see the tiny, bright markers of magnetic fields. Never before seen to this clarity, these bright specks are thought to channel energy up into the outer layers of the solar atmosphere called the corona. These bright spots may be at the core of why the solar corona is more than a million degrees. ⠀ More: nsf.gov/solarscience ☀️ ⠀ Credit: NSO/AURA/NSF ⠀ #sun #vision2020 #video #astronomy #telescope #ourstar