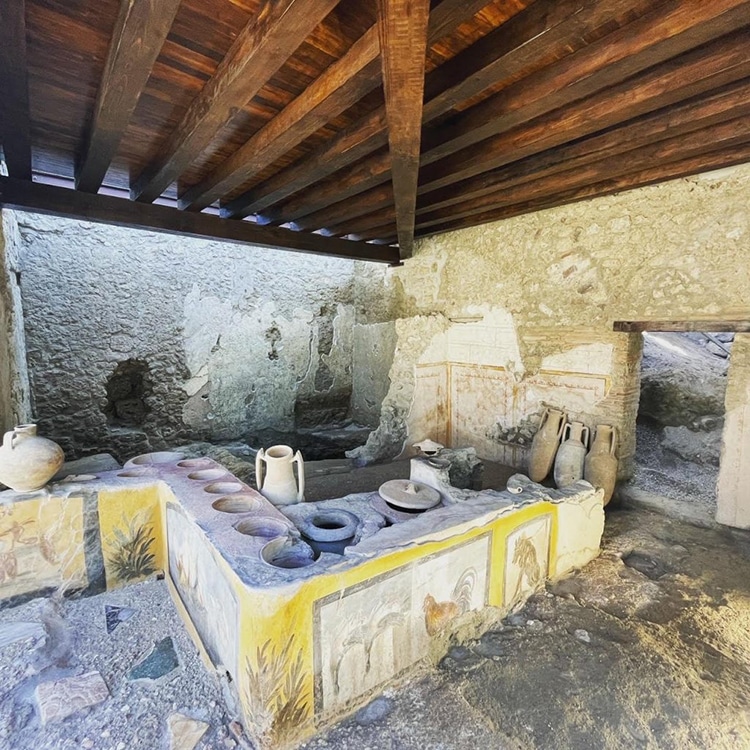 The thermopolium at Pompeii will be on view to the public as of August 12, 2021. (Photo: Pompeii Sites)

The ancient city of Pompeii remains frozen in 79 CE, when the flourishing Italian town was buried under falling ash from Mount Vesuvius. While excavations have been ongoing at the site since the 18th century, much of the city remains buried. From 2019 to 2020, archeologists discovered and excavated a stunning thermopolium, a type of hot food stand or “snack bar” which was common in Roman times. This site—decorated in well-preserved frescoes—is now available for the public to visit.

Officially known as the Thermopolium of Regio V, this hot-food business was one of about 80 known to have operated in Pompeii. The lower and middle classes often purchased and ate prepared meals outside of their homes. The thermopolium features a masonry counter which were embedded with dolia, ceramic jars holding the dishes for sale. These included mallard, rooster, fava beans, and other common Roman foods. Wine, of course, was also on the menu.

While such hot-food stands were common, the Thermopolium of Regio V stands out—even at Pompeii—for its incredibly well-preserved frescoes. These paintings were applied to wet plaster. Their bright yellow and skillful depictions of fowl and foliage have held up remarkably well to today. This appropriate decoration for a food venue might remind the viewer of a modern restaurant. To prepare the newly excavated site for the public, a new wooden roof was installed in an ancient style to protect the counter below. As of August 12, 2021, the site is open to visits by the public, who can walk in the footsteps of the hungry ancients.

As of August 12, 2021, the Thermopolium of Regio V is open to the public at Pompeii. 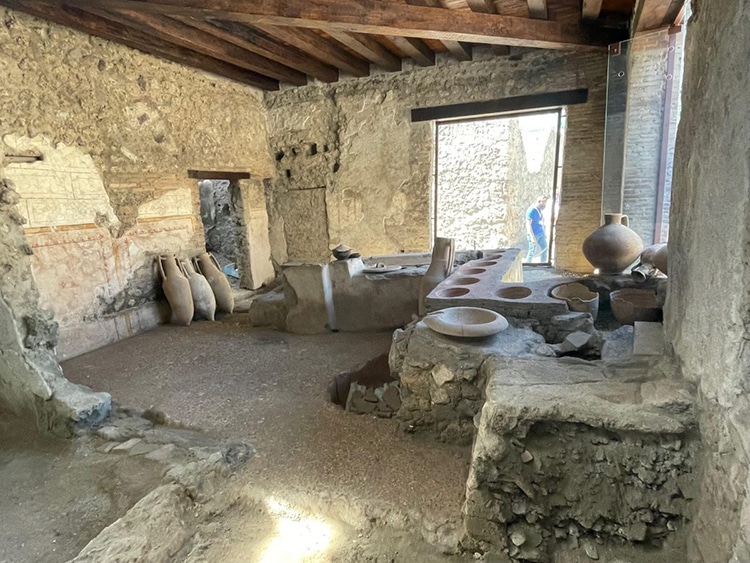 Another view of the snack bar now open to the public. (Photo: Pompeii Sites)

The thermopolium is a type of hot-food vendor common in Ancient Roman times. 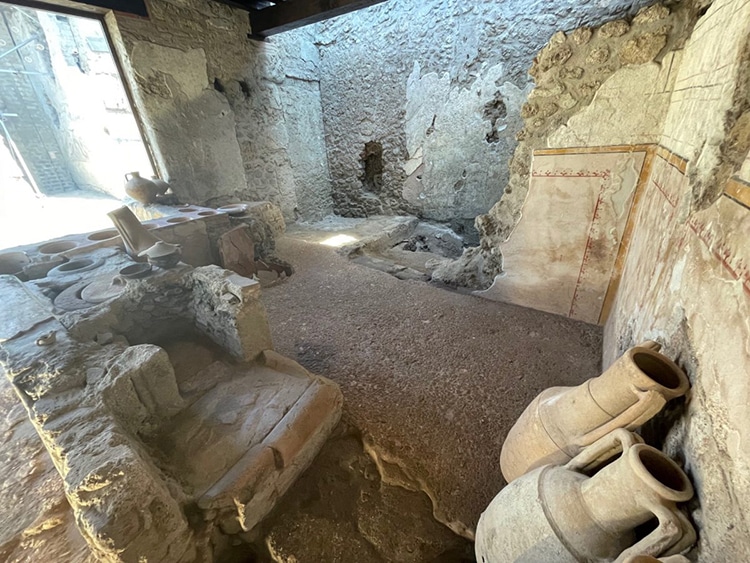 This sort of “snack bar” was popular with the middle and lower classes who often purchased prepared meals rather than cook them at home. 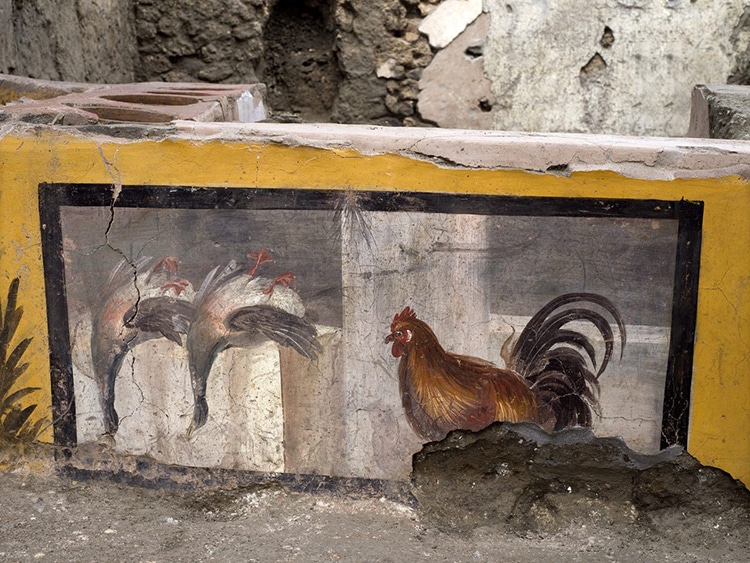 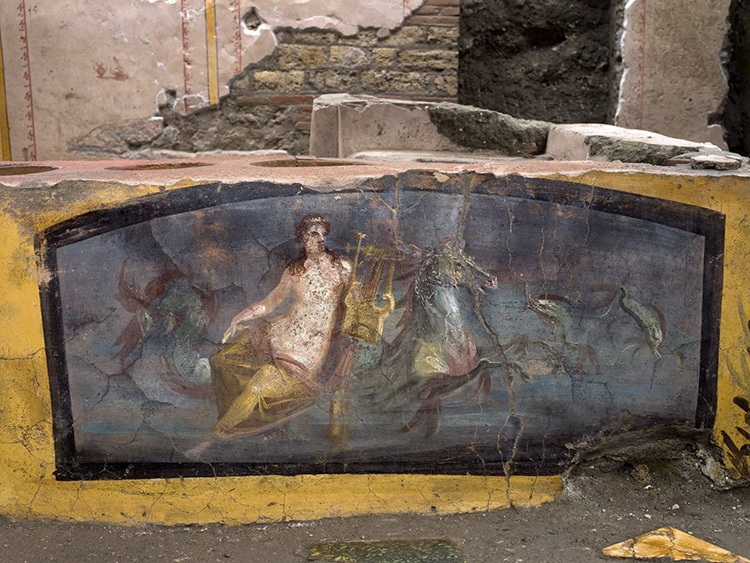 If you visit Pompeii, be sure to check out this ancient food vendor. 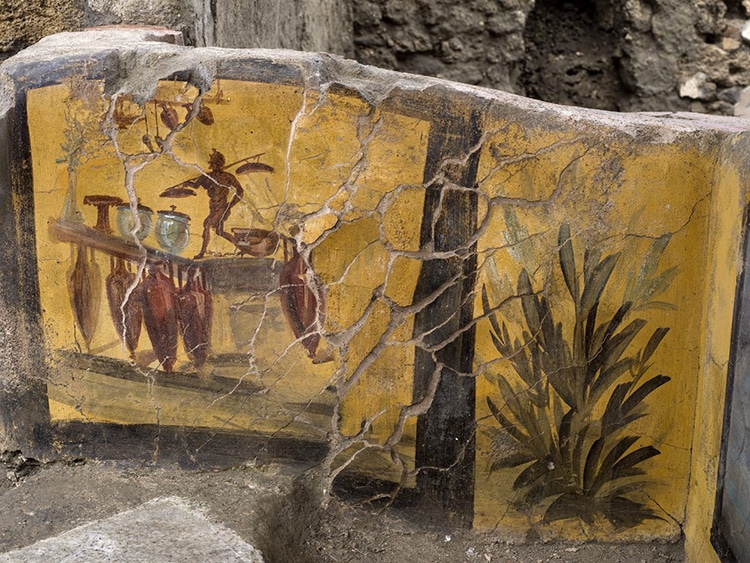