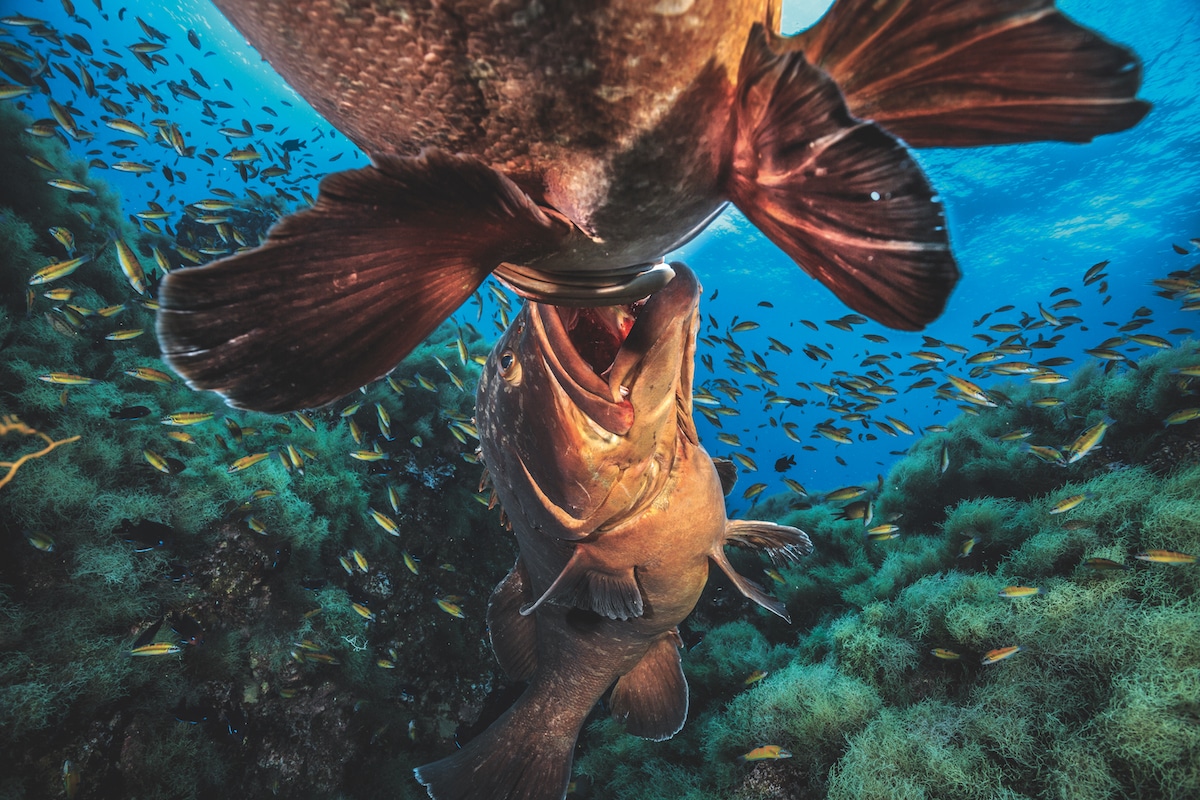 ‘Big fish fight' by Jordi Chias Pujol. “These two huge dusky groupers are in a violent struggle. The prize, overlying an undersea volcanic pinnacle off the Azores, is a strip of prime spawning territory into which the owner can attract females. It encompasses a rocky retreat, but the key aspect is that a strong current runs overhead – ideal for carrying away fertilized eggs. Males start out as females, but when they get to be 10-15 years old, and if there aren’t too many males around, they change sex.” (Photo: Jordi Chias Pujol/Unforgettable Underwater Photography/NHM)
This post may contain affiliate links. If you make a purchase, My Modern Met may earn an affiliate commission. Please read our disclosure for more info.

From the incredible whale photography of award-winning Norwegian professor Audun Rikardsen to a glimpse at a rare New Zealand sea urchin by author and photographer Daryl Torckler, the images reveal some of the hidden treasures of the deep sea. Equally as interesting are the stories behind the photographs, as each underwater photographer shares their personal observations and experiences.

For the Natural History Museum, a book focusing on underwater photography was a natural extension of the Wildlife Photographer of the Year contest. As one of the most popular categories in the competition, the publication also works in tandem with the museum's effort to raise awareness about marine conservation. This follows NHM's decision to discontinue the sale of single-use plastic water bottles in 2017. “It's vital that scientific institutions like the museum lead the way in the fight to understand and protect the natural world,” Professor Ian Owens, NHM's director of science said at the time.

Combining art, science, and education the NHM continues to act as a champion for the natural world, giving underwater photographers a platform to showcase their artistry and remind the public of what we have to lose if we don't continue the conservation of marine life.

Unforgettable Underwater Photography is a new book showcasing the best international underwater photographers over the past decades of the Wildlife Photographer of the Year contest. 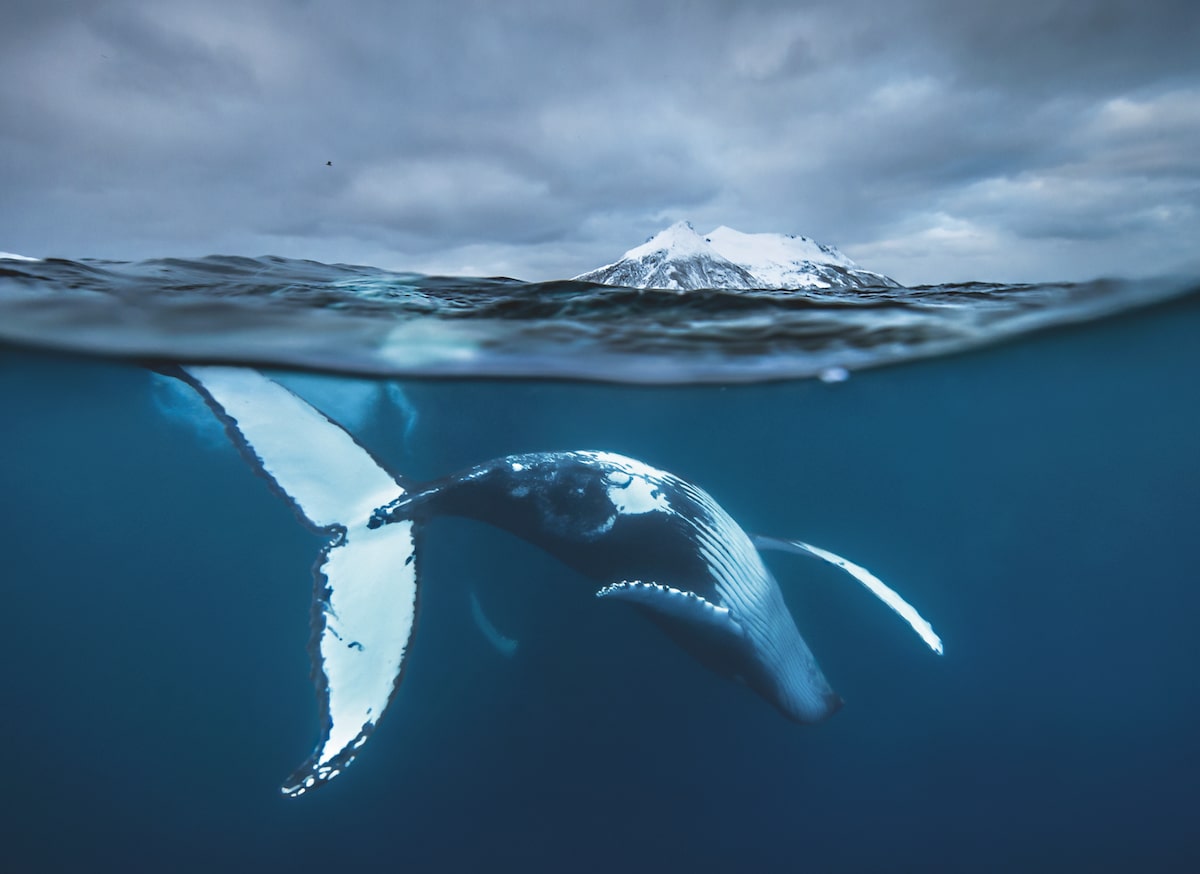 ‘Arctic showtime' by Audun Rikardsen. “An exuberant male humpback whale cavorts in the Barents Sea off northern Norway. It’s a unique split-level image, shot in low light, freezing conditions, near the end of the polar winter. The humpback is displaying his prowess to both females and rival males, singing as he pirouettes, breaches, and dives. It’s behavior that increases ahead of the migration south of at least some of the humpbacks who will head to warmer, southern locations, where pregnant females give birth and mating occurs.” (Photo: Audun Rikardsen/Unforgettable Underwater Photography/NHM) 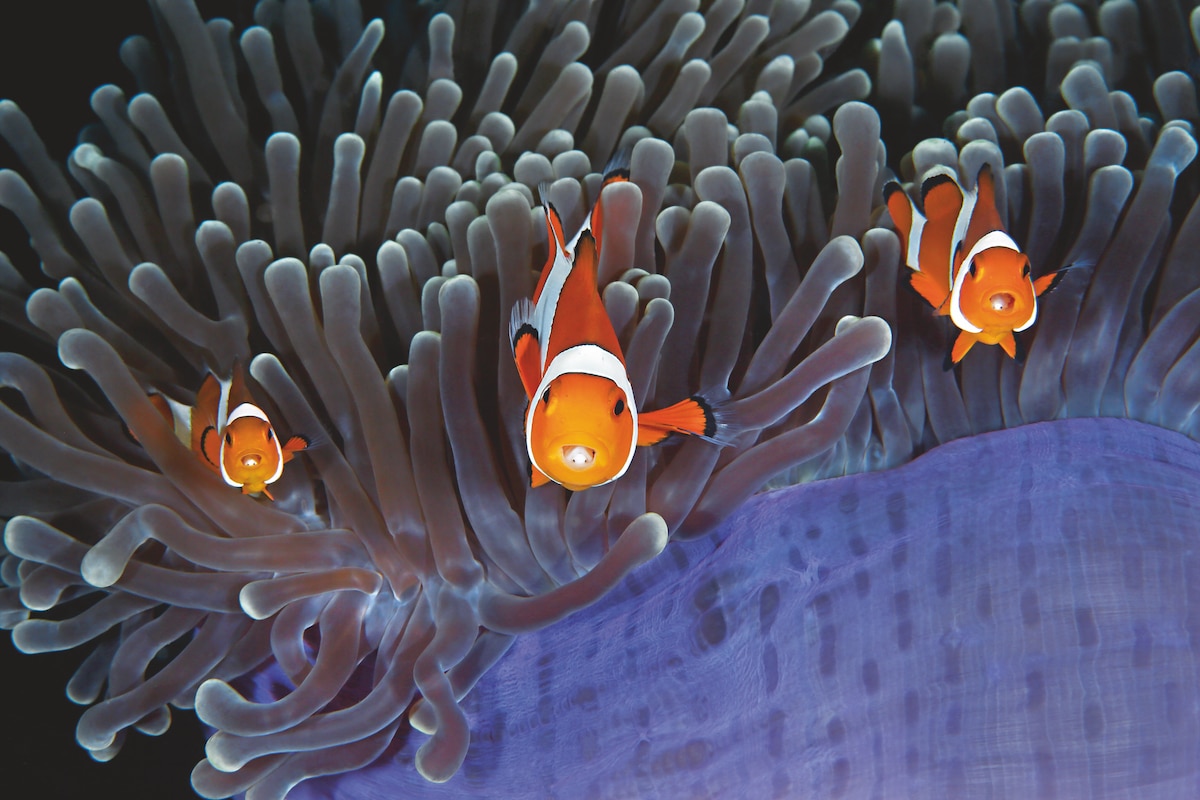 ‘The insiders' by Qing Lin. “Peeping out of the tentacles of a magnificent sea anemone, off North Sulawesi, Indonesia, are clown anemone fish. They live within the confines of the anemone, immune to its stings, thanks in part to a thick covering of mucus. The social arrangement is such that, not only does their host protect them, but they feed on debris among the tentacles and may even snack on a tentacle. In return, they eat parasites, may drive off harmful fish and aerate the water with their fins; it could even be that they attract fish which the anemone stings and eats.” (Photo: Qing Lin/Unforgettable Underwater Photograph/NHM) 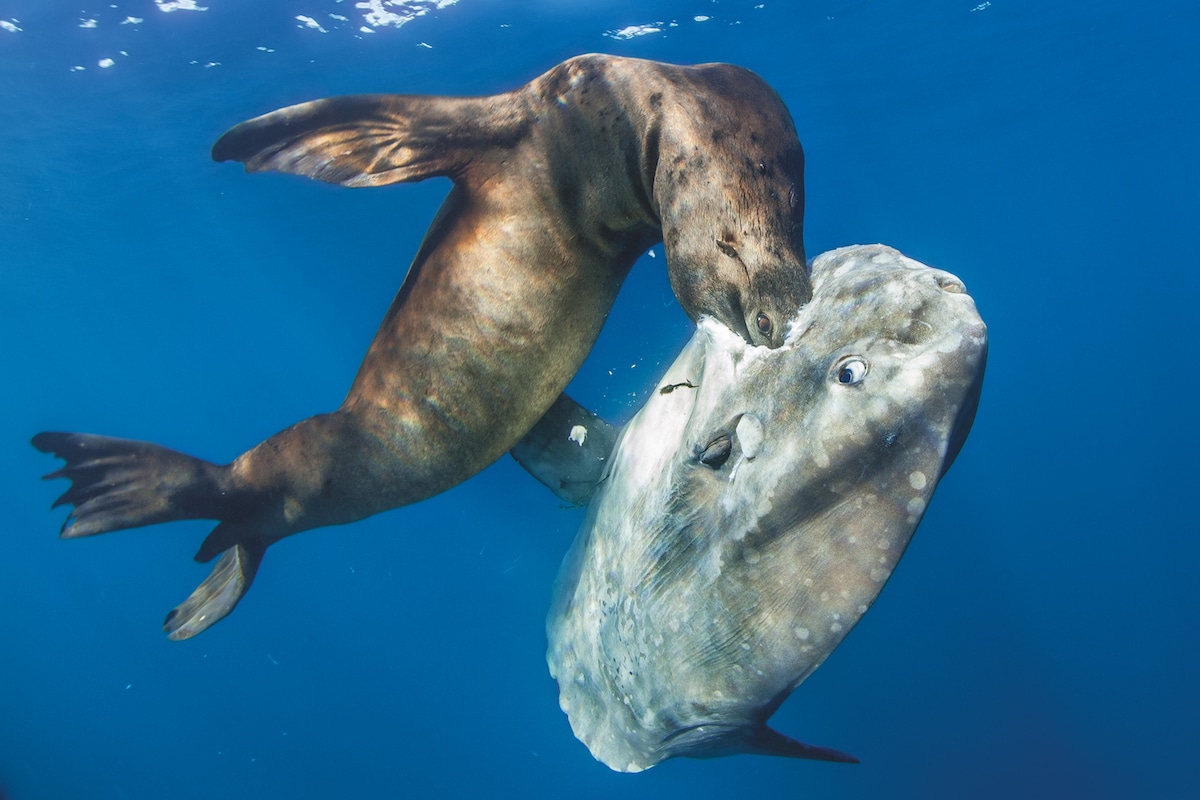 ‘Giant killer' by Ralph Pace. “If a fish can express emotion with its eyes, this ocean sunfish surely can. The youngster was desperate to dive, and the California sea lion was equally determined that it shouldn’t. The resulting thrashing at the surface attracted seabirds, which in turn brought the photographer to the scene, over Nine Mile Bank, way off the coast of California. … This photograph was taken in 2015, when the extreme El Niño event meant much of the sea lions’ usual fish prey had moved north to cooler waters, making the sunfish a prize worth struggling for.” (Photo: Ralph Pace/Unforgettable Underwater Photography/NHM) 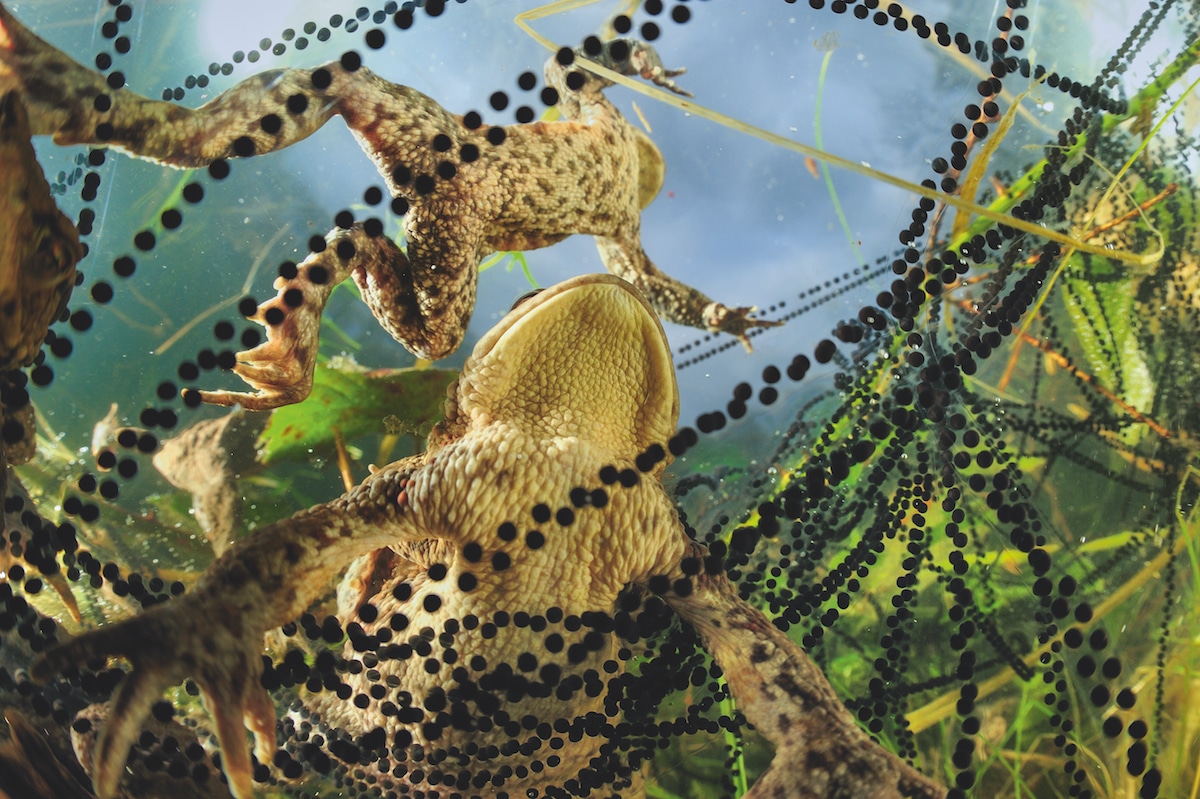 ‘Pearls of spring' by Solvin Zankl. “It’s March – peak migration time for European common toads when most are returning to the ponds and lakes where they were spawned. The move would have begun in autumn, before hibernation, in readiness for the spring push. The temperature now is a trigger, signaling that the water is likely to be ice-free. Here, in a pond in Germany, spawning is in full swing. The photographer is watching the activity on his laptop via a USB‐wire link to his camera at the bottom of the pond.” (Photo: Solvin Zankl/Unforgettable Underwater Photography/NHM) 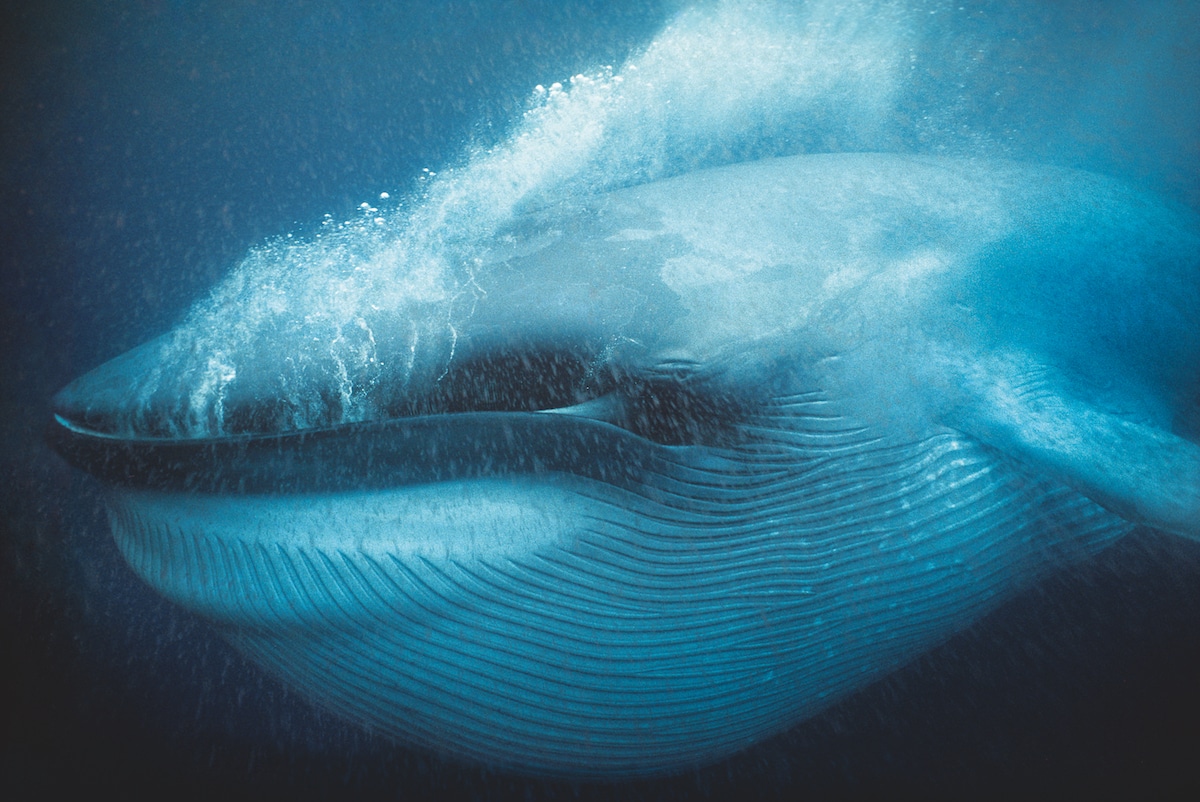 ‘Big blue mouthful' by Doc White. “This picture was the first ever to show, full frame, a blue whale with its throat pouch expanded, the pleats forced open by the engulfment of a gargantuan amount of water and shrimp-like krill. Having lunged through the krill swarm, the whale is expelling the water, forcing it through the massive sheets of hair-like baleen material, which hang from its mouth. To find large enough aggregations of krill, a blue whale is forced to travel great distances. But when a large swarm is located, the lunge-feeding technique is highly energy-efficient.” (Photo: Doc White/Unforgettable Underwater Photography/NHM) 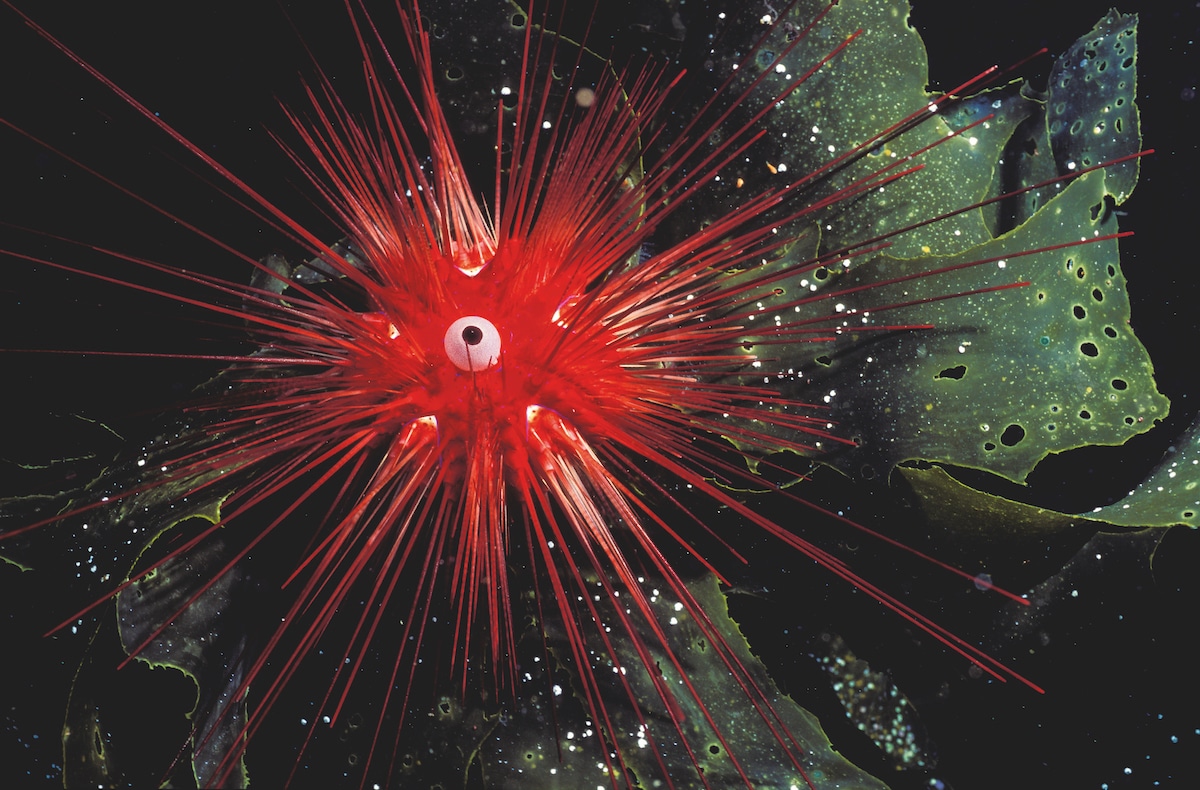 ‘The startling warning' by Darryl Torckler. “Illuminated, this is the world’s most spectacular sea urchin, yet it remained undiscovered until 1965. That’s partly because the fiery sea urchin only inhabits deeper reefs off northern New Zealand and southern Australia. But it is also because it hides away in the day, and in deeper water, where red wavelengths are filtered out, it appears black or deep brown rather than fiery red. Its obvious defense, of course, is its needle-like spines.” (Photo: Darryl Torckler/Unforgettable Underwater Photography/NHM) 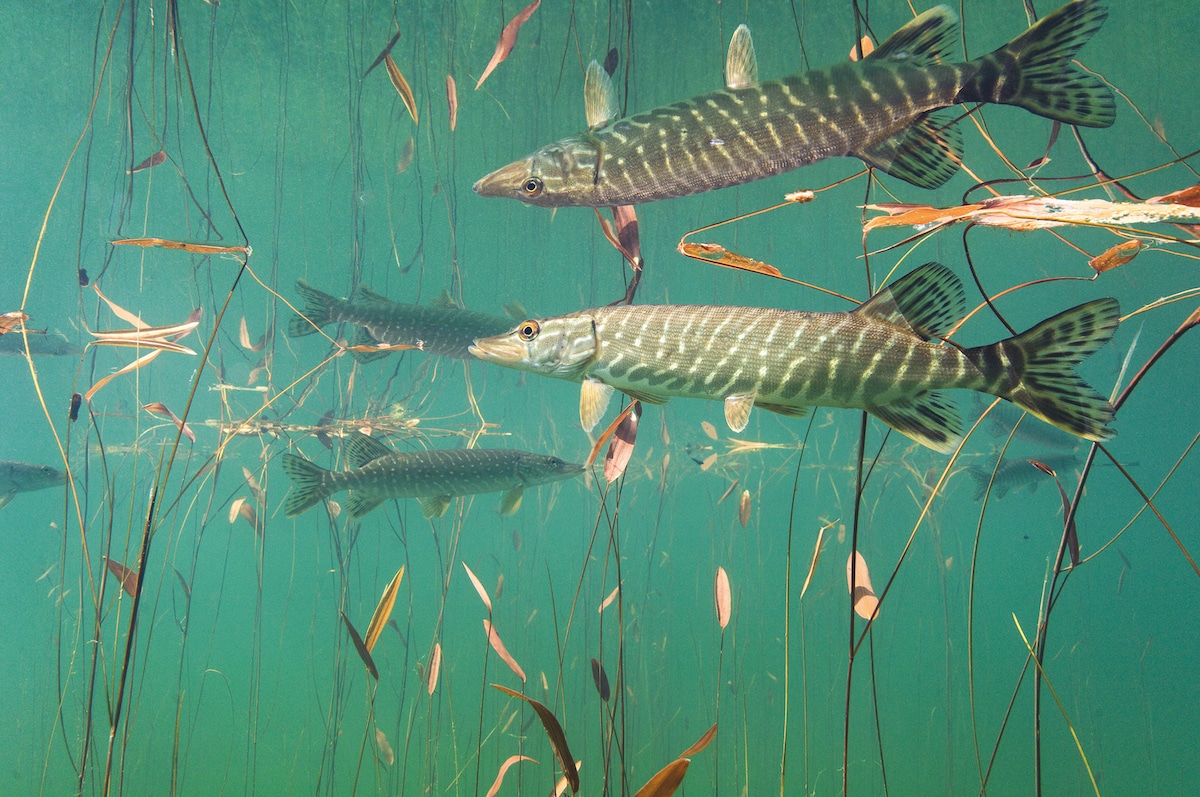 ‘Hanging around' by Michel Loup. “Motionless, as if suspended, young male pike hang close to the surface of a lake-edge creek high in the Jura Mountains of France. Though the water is crystal-clear – filtered from the peaks as it percolates through the limestone – the markings and color of these predators help camouflage them among the pondweed. As solitary hunters, they would normally be spread out in territories, often in places with more plants.” (Photo: Michel Loup/Unforgettable Underwater Photography/NHM) 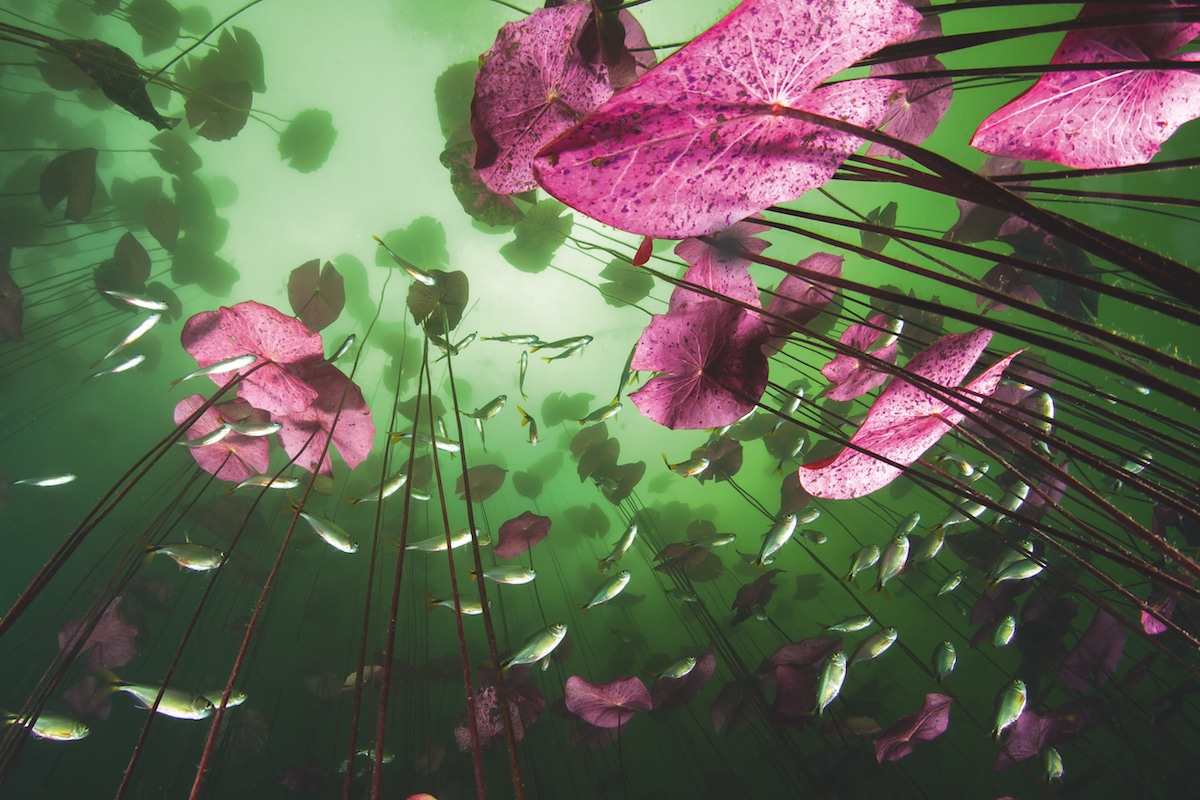 ‘Opening to the underworld' by Christian Vizl. “The view from below in the still water of the Aktun Ha cenote in Mexico is like looking into a magical aquarium. A natural summer algal bloom colours the top layer of water green, and though the undersides of the ageing lily leaves have been lit by a low light from strobes, they are truly pink. Their stems reach up several metres from the bottom of the wide cenote pool, but though most of them never reach the surface, for much of the year the water is so crystal clear that there is enough light for them to photosynthesize.” (Photo: Christian Vizl/Unforgettable Underwater Photography/NHM) 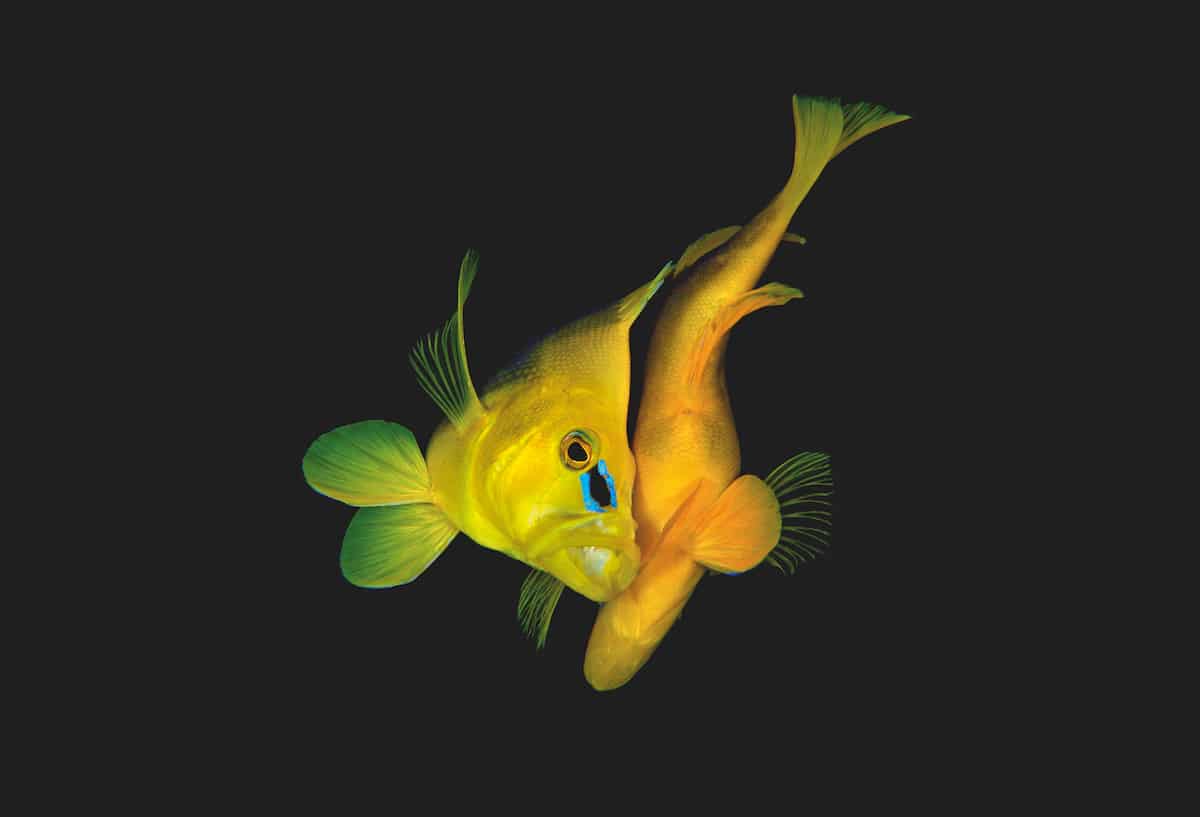 ‘The beauty of gender-bending' by Alexander Mustard. “This is a moment of ecstasy, seconds before spawning, in the extraordinary mating ritual of shy hamlets. The male is calling out as he caresses the female, who is curved around him, head-down, about to extrude her eggs. He is fanning his pectoral fins to create a current, which will draw the eggs towards him as he releases his sperm. This coral-reef fish, possibly the most beautiful of the 13 Caribbean species of hamlets, spawns at dusk – a dangerous time, when the most predators are about.” (Photo: Alexander Mustard/Unforgettable Underwater Photography/NHM)

My Modern Met granted permission to use photos by NHM.

Amazing Winners of the 2018 Underwater Photographer of the Year Contest

Ready to get your copy? Share
Like My Modern Met on Facebook
Get Our Weekly Newsletter
Become a
My Modern Met Member
As a member, you'll join us in our effort to support the arts.
Become a Member
Explore member benefits