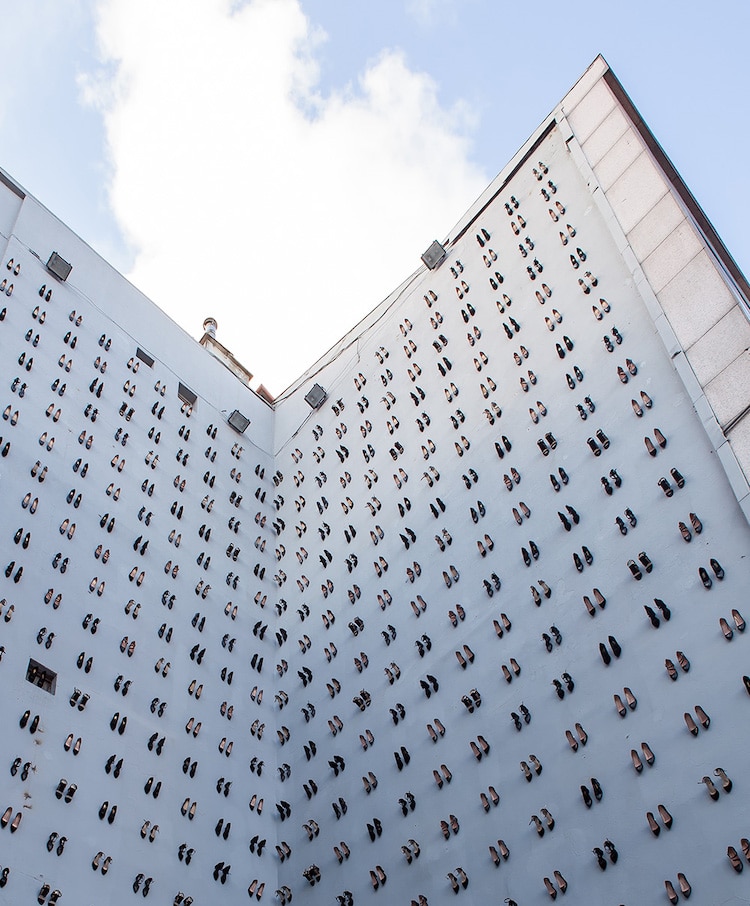 Turkish artist Vahit Tuna has created a haunting installation to draw the public's attention to an important issue—domestic violence. By placing 440 pairs of black high heels on an enormous wall, he's making a bold statement. Each pair represents a woman in Turkey that was killed by her partner in 2018. It's a shocking number in a country where femicide is on the rise.  In using black heels as a symbol of defiance and independence, Tuna is hoping that the sculpture will raise awareness on the topic.

The installation was inspired by a funerary custom in some parts of Turkey, where the shoes of the deceased are hung outside of their house. In this case, the shoes will hang for six months on a wall curated by the non-profit art platform Yanköşe. Founded by Turkish coffee chain Kahve Dünyası, a rotating roster of artists are asked to install work across 2,800 square feet of wall space located in Kabataş.

Studies have shown that in 2017, 58% of global female homicides can be attributed to intimate partners or family members. Sadly, this percentage has increased over time and may be even higher, as some countries do not provide proper statistics related to femicide. While countries are attempting to tackle the issue in different ways, from better police training to preventively empowering women, there is still work to be done.

As such, it is a step in the right direction to see such a public space given over to a powerful installation. Looking up at the wall, it's impossible to ignore the vast quantity of shoes. By giving these 440 women a physical presence on the wall, Tuna is helping to ensure that their lives were not lost in vain.

Each pair of heels represents a femicide that took place in Turkey in 2018.

The artist hopes the installation will bring greater awareness about domestic violence against women.

440 pairs of women's shoes were hung on one of the city walls in #Istanbul. This is the number of #women #murdered by their husbands in #Turkey during the year. pic.twitter.com/timqWeYnph

1500 Scissors Shockingly Suspended from the Ceiling

Remembering Murdered Women Around the World