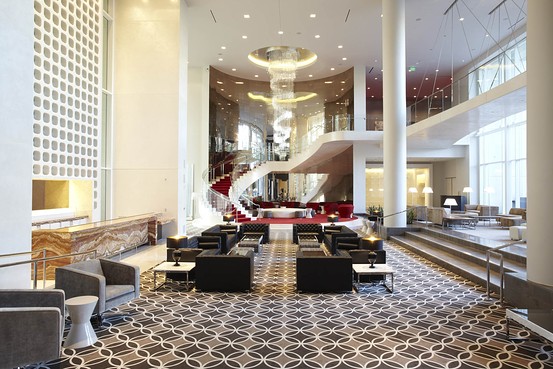 While it isn't the best of times, yesterday Starwood still managed to open its doors for its newest addition, W Hotel Hollywood. Costing $350 million ($600 million for the whole development), this W hotel is located at the intersection of Hollywood Boulevard and Vine Street, which is walking distance to the Pantages, Hollywood Palladium and Avalon theaters. It contains a Bliss spa, the Drai's Hollywood nightclub and the Delphine restaurant. The W's rates range from $219 for a 400-square-foot room to $2,000 to $4,000 for a 1,650-square-foot room. Walk inside and expect to feel an old Hollywood vibe. Designed by the firms Designstudio Ltd. and Architropolis, the rooms offer “a mixture of “Barbarella”-style Hollywood and 1960s L.A. Modern.” Curbed got a first look at the lobby and said “The lobby's grand staircase is slightly reminiscent of Miami's Fountainebleau, and the interiors seem to be moving away from the minimalism of late 1990s/early 2000s W Hotels, with more texture, color and pattern.” We posted on this hotel over a year ago, eager to see how this W might change the Hollywood landscape. Can it bring a little glitz and glam to the area? You bet. Not only do they plan on holding press junkets galore (building suites specifically designed for that reason), they also expect to hold swanky post-event parties here. In fact, this weekend the W will host EMI's Capitol Records one after the Grammy Awards. Must check this out! Via WSJ and LA Times