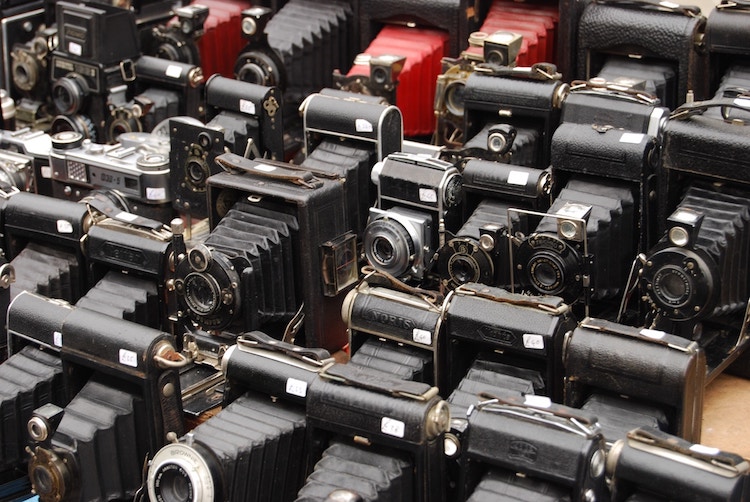 These days, thanks to smartphones, almost everyone has a camera with them at any given moment. And, there is no doubt about the impact of photography on the entire world. Rewinding time, before selfies were a cultural norm, before geniuses like Cindy Sherman and Andrea Gursky elevated photography to an art form, someone had to invent this piece of technology. So, who invented the camera? And how has it evolved over time into the piece of equipment we now know? Let's take a look at how this revolutionary invention changed how we document life.

The Pinhole Camera and Camera Obscura

Ancestors of the photographic camera, both camera obscura and the pinhole camera date to back to the ancient Greeks and Chinese. In fact, Chinese philosopher Mozi, who lived during the Han dynasty (circa 468 – circa 391 BC), was the first person to write down the principles of camera obscura. Ancient Greek philosopher Aristotle also wrote his musings about the phenomenon in his book Problems, wondering why the sun appears circular even when projected through a rectangular hole.

So, what is camera obscura? This basic principle is a natural optical phenomenon where an image on one side of a wall—or screen—is projected through a hole onto a surface opposite the opening. The resulting projection is upside down. Camera obscura, a term coined in the 16th century, also refers to a box, tent, or room set up for such projections. 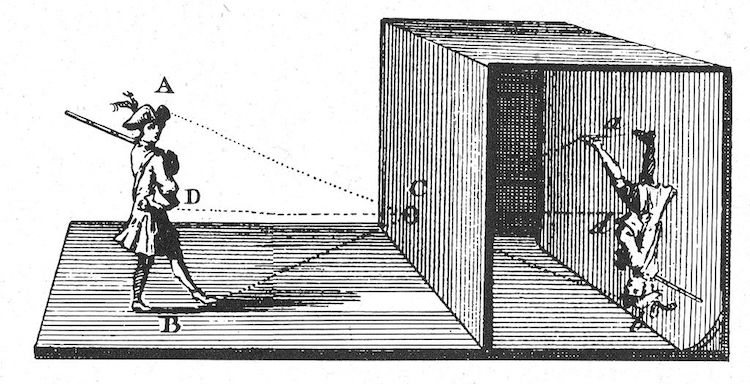 An illustration of the principles of camera obscura. (Photo: Public domain via Wikimedia Commons)

The only difference between a camera obscura and a pinhole camera is that a camera obscura uses a lens, while a pinhole camera is a similar device, but with an open hole. This technology picked up steam through the 17th and 18th centuries when artists used these devices to help project drawings they could then trace. The only issue with this system is that clearly, aside from tracing, there was no way to preserve the images.

That's where the next step on the road to the modern photographic camera comes into play.

Johann Zahn, Joseph Nicéphore Niépce, and the Invention of the Camera

While early camera obscura devices took up entire rooms, by the 17th-century developments lead to portable devices. Further advancements, like the invention of the magic lantern, further pushed what was possible with projection, but didn't solve the issue of capturing still images.

German author Johann Zahn, an expert on light, wrote extensively about the camera obscura, magic lantern, telescopes, and lenses. In 1685, he proposed a design for the first handheld reflex camera. Ahead of his time, it would take another 150 years before his invention became a reality.

French inventor Joseph Nicéphore Niépce is now widely accepted as the creator of photography as we now know it. Using a homemade camera, he produced the first partially successful photograph in 1816 on paper coated with silver chloride. Though this photograph no longer exists, letters from Niépce to his sister give evidence of a successful photograph. The first surviving photograph is also by Niépce and is now in the permanent collection of the University of Texas-Austin. It dates to 1826 or 1827 and is a scene from his window in Burgundy. All this makes Niépce widely accepted as the inventor of the first functional camera.

Using a technique he called heliography, the French inventor was able to produce one-of-a-kind images that could not be replicated. Heliography calls for a glass or metal surface to be coated in Bitumen of Judea. This naturally occurring asphalt would harden in the brightest areas, while the unhardened bitumen would be washed away, leaving behind the photographic imprint. This is still a long way off from photography as we now think of it, but was a revolutionary step towards permanent replicable photographs.

Keep reading to see how cameras developed, leading to negatives and the invention of film photography.