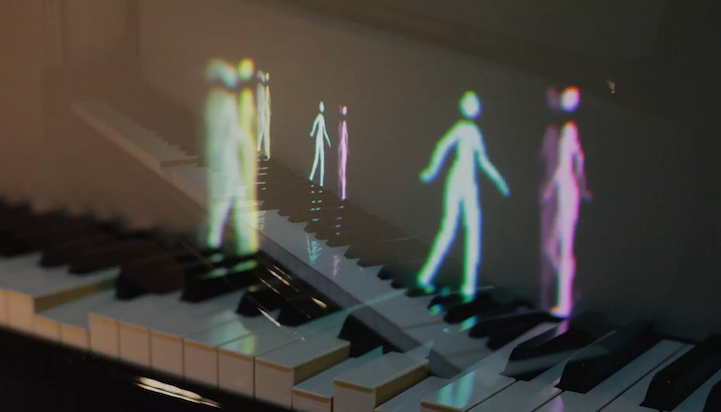 In classical music, the word “adante”—which means “walking” in Italian—describes a moderately slow tempo, like an average walking pace. MIT's Tangible Media Group has created a clever visual interpretation of the term, presented in a short film by the same name. In Adante, tiny digitized figures are projected just above an automated piano's keyboard, seeming to scale the keys—literally. Each animated step, skip, and stride sounds a new note.

The concept is intended to support an approach to music pedagogy that's embedded in physical movement, with an emphasis on full-body interaction, expression, and communication. Each of us has our own walking rhythm that comes with an easy cadence, so if we can only envision transferring that tempo to our hands, perhaps we'll one day be able to play as smoothly as the experts. Two musical maestros, Herbie Hancock and Vijay Iyer, have already stopped by MIT's Media Lab to take their turns tickling the ivories alongside the computerized characters, producing tunes that are intriguing to both the ear and the eye in a second behind-the-scenes video.

All images and videos via Tangible Media Group unless otherwise stated.