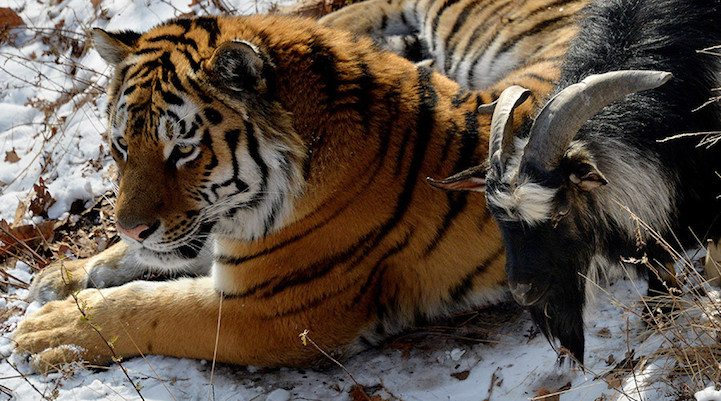 Recently, Primorye Safari Park's zookeepers placed a goat named Timur (who didn't have a name at that point) in Amur the Siberian tiger's cage as live food. Instead of treating the goat as his prey, Amur didn't go after Timur. This shocked the creature's caretakers because Amur has never behaved this way toward another animal during his bi-weekly, live animal feedings. “Nobody taught the goat to be afraid of the tiger. So, Amur decided not to mess with the fearless goat, and didn't eat it,” explains the park. “During the day, Amur and Timur walk together like a pair of good friends. Timur takes Amur for an alpha male, and follows [him] everywhere. Timur's fearlessness and caution have led to such a paradoxical result.”

Since the moment Timur entered Amur's enclosure, the two have rarely left each other's side. Rather than eating live food, the tiger has been eating raw meat and zookeepers don't know if or when he'll switch back. In the meantime, Amur continues to protect his new friend. According to one of the park officials, Amur “hissed at an employee who feeds the tigers, as if to tell him, ‘Hey, don't you ever approach my friend.' Before that, he never showed any aggression towards staff.” Both Timur and Amur are currently demonstrating that companionship can blossom in the most unlikely places.

All images via RT.