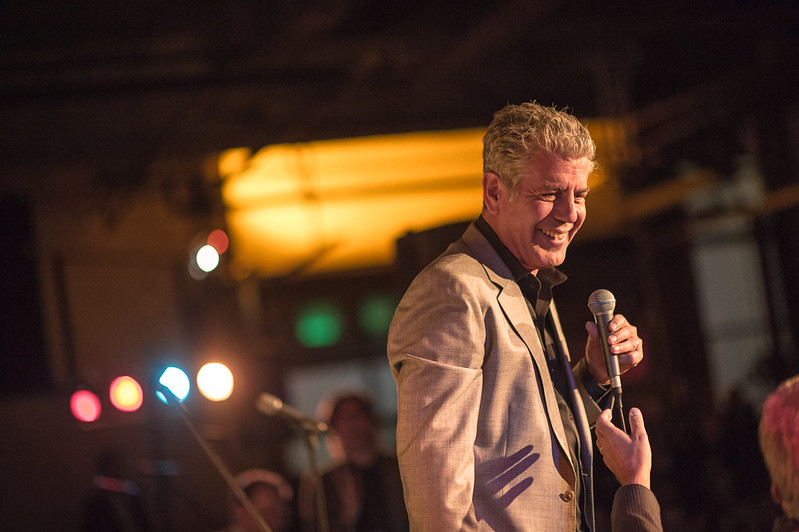 On June 8, 2018, the world was shocked and saddened to learn that inspiring chef, acclaimed author, and award-winning storyteller Anthony Bourdain had tragically taken his own life at 61 years old. Celebrated for his open-minded approach to cuisines, cultures, and everything in between, Bourdain was beloved by people from all walks of life.

Though born in New York City, Bourdain was raised in New Jersey—”and proud of it.” While he has fond memories of what he ate while growing up in the Garden State, it was his first encounter with an oyster during a childhood trip to France that sparked his famous love affair with food.

“I took it in my hand, tilted the shell back into my mouth as instructed by the by now beaming Monsieur Saint-Jour, and with one bite and a slurp, wolfed it down. It tasted of seawater . . . of brine and flesh . . . and somehow . . . of the future. Everything was different now. Everything.”

After this life-changing dish, Bourdain worked as “a dishwasher, a prep drone, a line cook, and a sous-chef” as a teenager and a university student. Though he would abandon conventional college courses, he would continue on his culinary path, eventually enrolling in The Culinary Institute of America, where he graduated in 1978.

From then on, he ran renowned restaurants across New York City—a line of work he detailed in Don't Eat Before Reading This, an article he wrote for the April 19, 1999 Issue of The New Yorker. Celebrated by editors and readers alike, this piece launched his career as a storyteller, culminating in book deals (Kitchen Confidential: Adventures in the Culinary Underbelly remains his most well-known work of non-fiction) and television shows, including his popular Parts Unknown.

In addition to these tangible accomplishments, Bourdain will be remembered for his power to immerse himself wherever he landed—and his uncanny ability to inspire us to do the same. “Do we really want to travel in hermetically sealed popemobiles through the rural provinces of France, Mexico, and the Far East, eating only in Hard Rock Cafes and McDonalds?” he asked. “Or do we want to travel without fear, tearing into the local stew, the humble taqueria’s mystery meat, the sincerely offered gift of a lightly grilled fish head? I know what I want. I want it all. I want to try everything once.”

Over the weekend, fans, friends, fellow celebrities, and even the former president took to the Internet to pay tribute to Anthony Bourdain.

“Low plastic stool, cheap but delicious noodles, cold Hanoi beer.” This is how I’ll remember Tony. He taught us about food — but more importantly, about its ability to bring us together. To make us a little less afraid of the unknown. We’ll miss him. pic.twitter.com/orEXIaEMZM

Anthony was my best friend. An exceptional human being, so inspiring & generous. One of the great storytellers who connected w so many. I pray he is at peace from the bottom of my heart. My love & prayers are also w his family, friends and loved ones. pic.twitter.com/LbIeZK14ia

Stunned and saddened by the loss of Anthony Bourdain. He brought the world into our homes and inspired so many people to explore cultures and cities through their food. Remember that help is a phone call away US:1-800-273-TALK UK: 116 123

I have to say I’m in total shock to hear that the amazing @Bourdain has just died 💔 he really broke the mould, pushed the culinary conversation, Rest in peace chef 👨‍🍳 🙏 thoughts and love to all his family and close friends xxxxxxxxxxx pic.twitter.com/HB7sV7CeRH

This is utterly heartbreaking. Thank you for opening our eyes to parts of the world both cherished and unknown. What a legacy. Sending peace and love to his family. If you or someone you love needs help, please reach out or call 1-800-273-TALK. https://t.co/mkht3wTY5m

A friend of @StarTalkRadio. A friend of Food & Culture. A friend to us all. Anthony Bourdain, RIP. (1956-2018). pic.twitter.com/uVqEgldGsL

Bourdain's exceptional writing made this one formerly picky, fearful eater very brave and want to try everything and I'll always be grateful for him and the worlds he opened

Anthony Bourdain loved and understood Louisiana better than anyone not from here possibly could. He got us.

Here he was in Mardi Gras in Mamou this year, where he dressed up in a costume to chase a chicken for a gumbo. And yes, this was all perfectly sensible. pic.twitter.com/8MdBtyvKa6

I’ve brushed up against this darkness and I know it’s a tempting exit but REACH OUT to ANYONE. Stay on this side of it — in the light and warmth. Where you get to try again, every day.

Maybe we all wanted to hang out with him. He was that cool, fun, frank, insightful. He introduced us to distant lands and to people with different traditions. And without ever preaching, he reminded us that we humans are far more alike than different. Thank you Anthony Bourdain pic.twitter.com/QMznx4JMhS

Anthony. One of my idols. Unapologetic, passionate and one of the best storytellers on the planet. Thank you for making food so exciting. And always standing up for everything right. Horrible. Why why why. Be at peace now 🙁

Just saw the sad news that Anthony Bourdain has died. I watched his show when I was in space. It made me feel more connected to the planet, its people and cultures and made my time there more palatable. He inspired me to see the world up close. #RIPAnthonyBourdain pic.twitter.com/Cb6IfmzylN

We have lost one of the greatest storytellers in the world Anthony Bourdain. He took us around the world sharing food culture and mostly the connection between people. He will be missed.

#RIP Anthony Bourdain – Apart from his work, he championed the cause of @jrezaian when the journalist was imprisoned in Iran for doing his job. Upon release, Bourdain encouraged Jason to write a book — and would agree to publish it https://t.co/hXFbCV1Bzt pic.twitter.com/RQQkUWbfF0

Through space and time, Anthony. Your love will find you again. pic.twitter.com/XBod1vDZ8k

Some people shared their favorite quotes by the beloved chef, who was known for his open mind and inspiring approach to travel, cooking, and life.

ANTHONY BOURDAIN ON HOW HE'D LIKE TO BE REMEMBERED: “Maybe that I grew up a little. // That I'm a dad, that I'm not a half-bad cook, that I can make a good coq au vin. That would be nice. And not such a bad bastard after all.” (from 2015 interview with Wine Spectator magazine) pic.twitter.com/VVKmED39IF

Anthony Bourdain told @nprfreshair in 2016 that experiencing the everyday lives of people around the globe helps give depth to the news reports about those places. https://t.co/WljjwLy46H pic.twitter.com/4QXfysV8S4

Anthony Bourdain, the chef and gifted storyteller who took TV viewers around the world to explore culture, cuisine and the human condition for nearly two decades, has died. He was 61. https://t.co/eqFL2anGf4 pic.twitter.com/vUvIZ0QIVg

Here are more words of wisdom from the one and only Anthony Bourdain:

“Travel isn’t always pretty. It isn’t always comfortable. Sometimes it hurts, it even breaks your heart. But that’s okay. The journey changes you; it should change you. It leaves marks on your memory, on your consciousness, on your heart, and on your body. You take something with you. Hopefully, you leave something good behind.”

“As you move through this life and this world you change things slightly, you leave marks behind, however small. And in return, life —and travel — leaves marks on you. Most of the time, those marks — on your body or on your heart — are beautiful. Often, though, they hurt.”

“If you’re twenty-two, physically fit, hungry to learn and be better, I urge you to travel — as far and as widely as possible. Sleep on floors if you have to. Find out how other people live and eat and cook. Learn from them — wherever you go.”

“I have come to realize with certainty, however, that I have the best job in the world. And that I work with some of the finest people on it. To be able to go wherever I want, when I want, do what I want, and then tell stories about what I’ve experienced is an incredible privilege. Who gets to do what I do? And when you’re that damned lucky, how do you stop? How do you ever get off the ride? And why would you?”

“For me, the cooking life has been a long love affair, with moments both sublime and ridiculous. But like a love affair, looking back you remember the happy times best —the things that drew you in, attracted you in the first place, the things that kept you coming back for more.”

“Without experimentation, a willingness to ask questions and try new things, we shall surely become static, repetitive, and moribund.”

“Your body is not a temple, it’s an amusement park. Enjoy the ride.”

“It's been an adventure. We took some casualties over the years. Things got broken. Things got lost. But I wouldn't have missed it for the world.”

The World Pays Tribute to the Legacy of Stephen Hawking

A Tribute to the Most Inspirational Man: Neil Armstrong