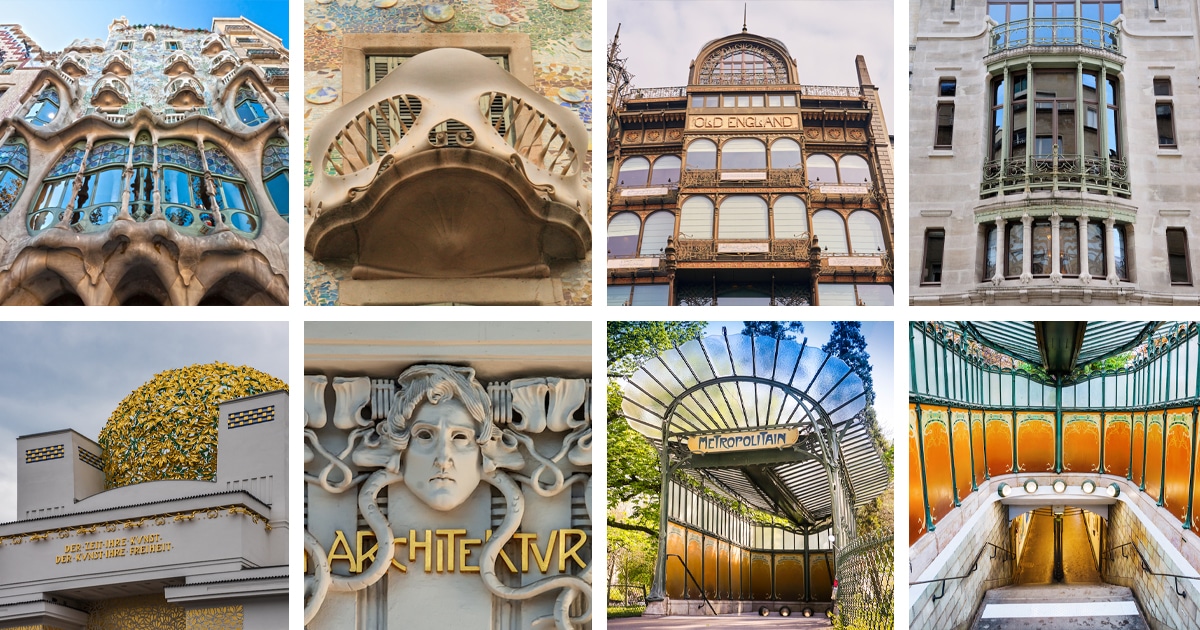 The whimsical Art Nouveau, like many international styles, can be found across almost all creative mediums: art, furniture, architecture, and more. Unlike some of these international styles, however, Art Nouveau sought to break down the barriers between these mediums to create a total work in one language. An Art Nouveau interior would have to be carefully considered and the architecture would be designed in conjunction with all paintings, sculpture, furniture, windows, textiles, and ornamentation. In a successful piece, it may be difficult to pull the bare architecture from all of the art within it.

Art Nouveau was popular from 1890 – 1910 directly following the Arts and Crafts movement and similar trends in decorative arts. It was first found in Belgium as a criticism of “academic art” and quickly made its way across Europe. Like many international movements of art and architecture, each new area that took on the aesthetic gave it a new name and adopted alternative characteristics—from Scotland’s Glasgow Style to Catalan’s Modernisme made famous by Antoni Gaudí.

When it died out right before the beginning of World War I, early forms of modernism began to take its place in response to political and economic changes across the world. Though the glory days of Art Nouveau are long over, the main ideas of the style have regained popularity with revivals of related architectural and artistic styles.

In this article, we break down the characteristics of Art Nouveau architecture and some of the best examples of the style.

The architecture of Art Nouveau is characterized by sinuous lines that create gentle, organic compositions. The curving lines found in Art Nouveau art are translated to whimsical furniture, metalwork, and more. Many of the qualities described below are all part of the same intention of this style: to create a single, intricate work that blurs the line between architecture and décor. 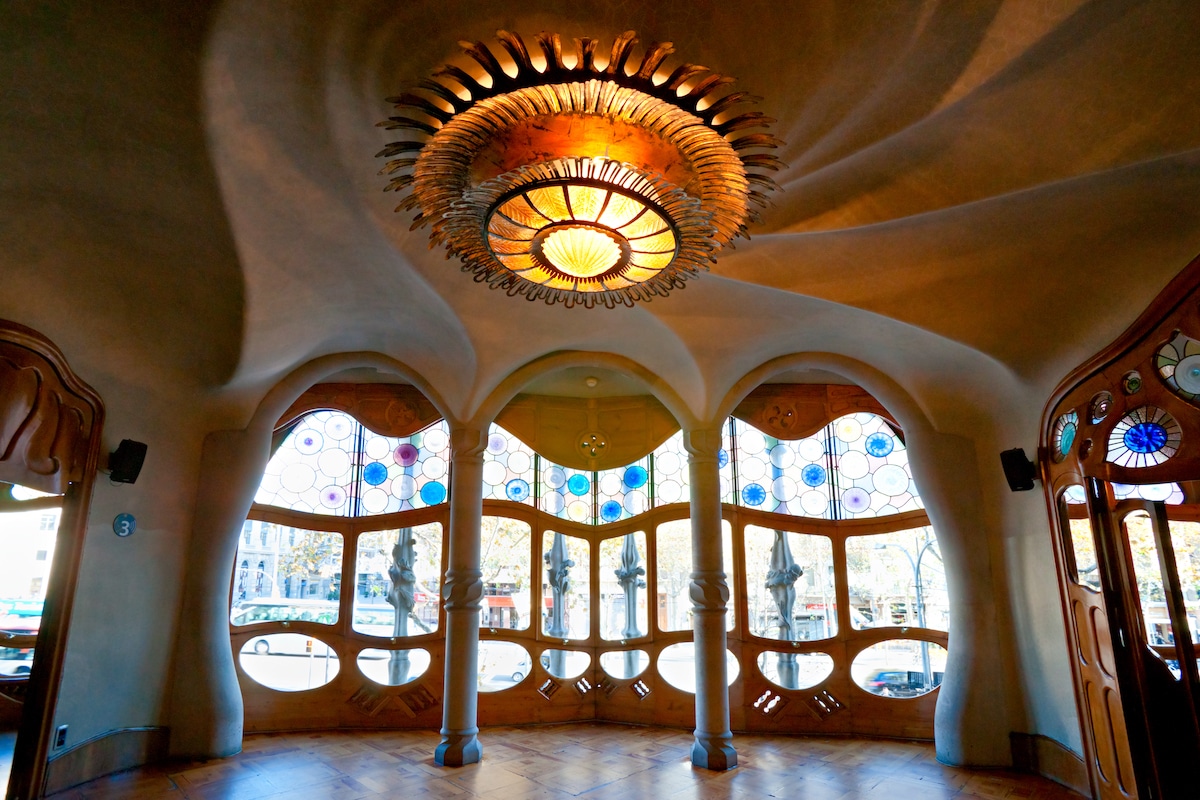 The organic curves are some of the most iconic elements of Art Nouveau architecture. The whimsical lines that characterize the art of the style are often transformed into intricate metalwork or even curving walls. 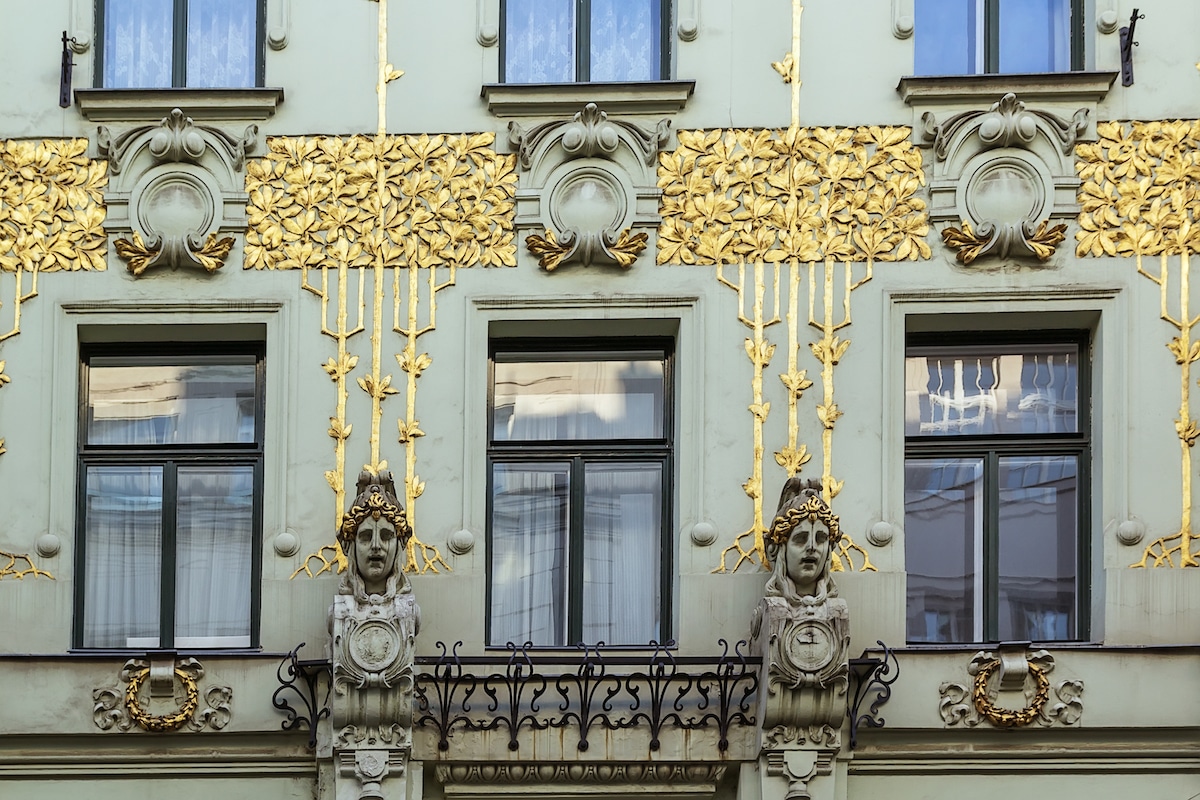 Like the colorful paintings of the art style, Art Nouveau buildings use bright colors to decorate their unusual forms. Popular colors include light green and blues used against ornamental gold details. Stained glass is another way bright colors are introduced to these spaces. 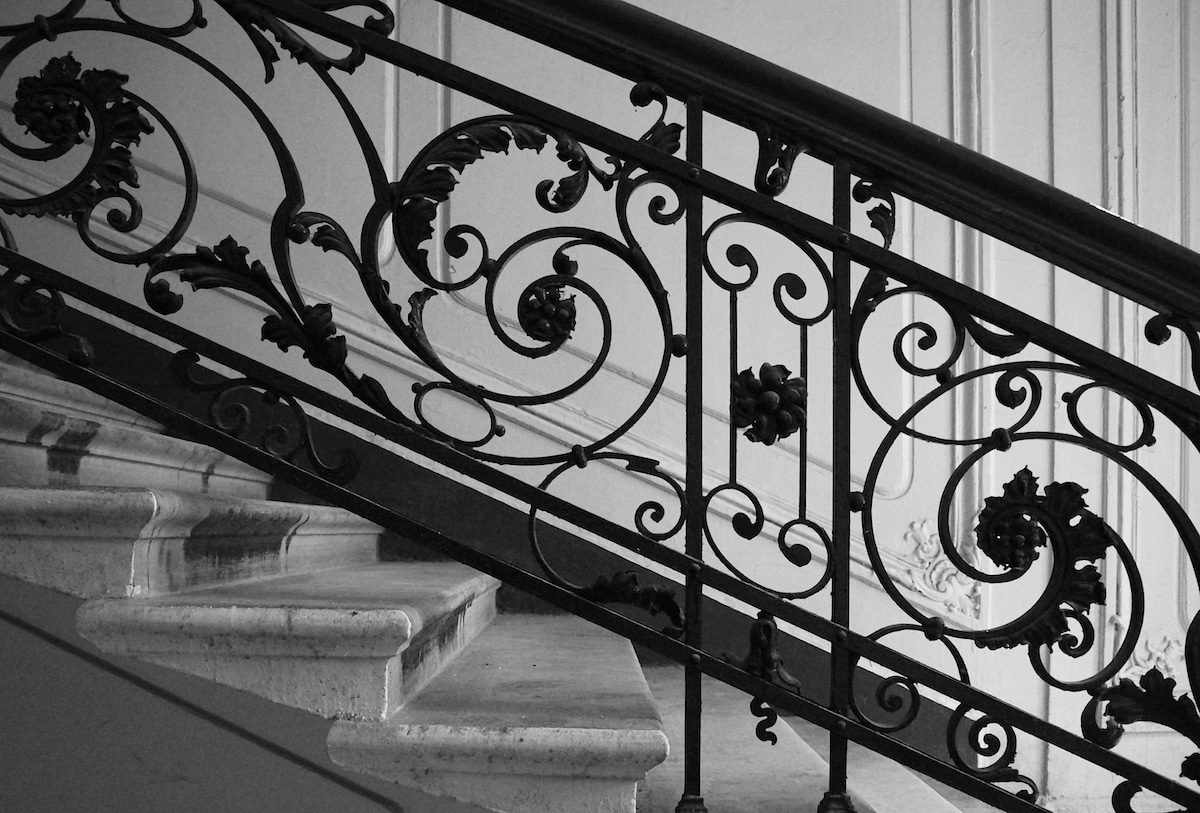 Since Art Nouveau architecture is the result of an artistic movement of the decorative arts, it makes sense that these spaces would include the intricacy and details of other art and crafts styles. One example of this attention to detail is in the metalwork found throughout this style from railings to window details. 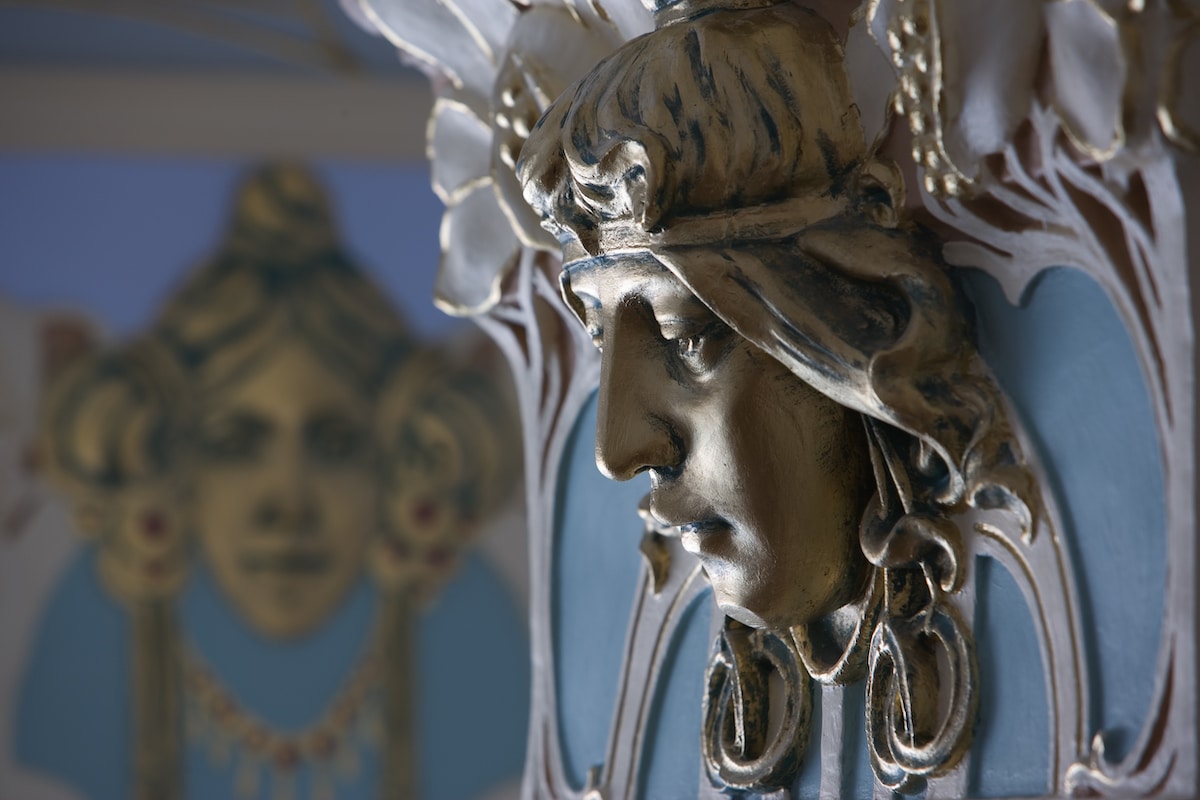 Art Nouveau art often features women in elegant backgrounds. In the architecture of this style, the faces of women and the female form are sometimes used as ornamentation throughout a building. This is another example of how sculpture becomes an integral part of Art Nouveau architecture. 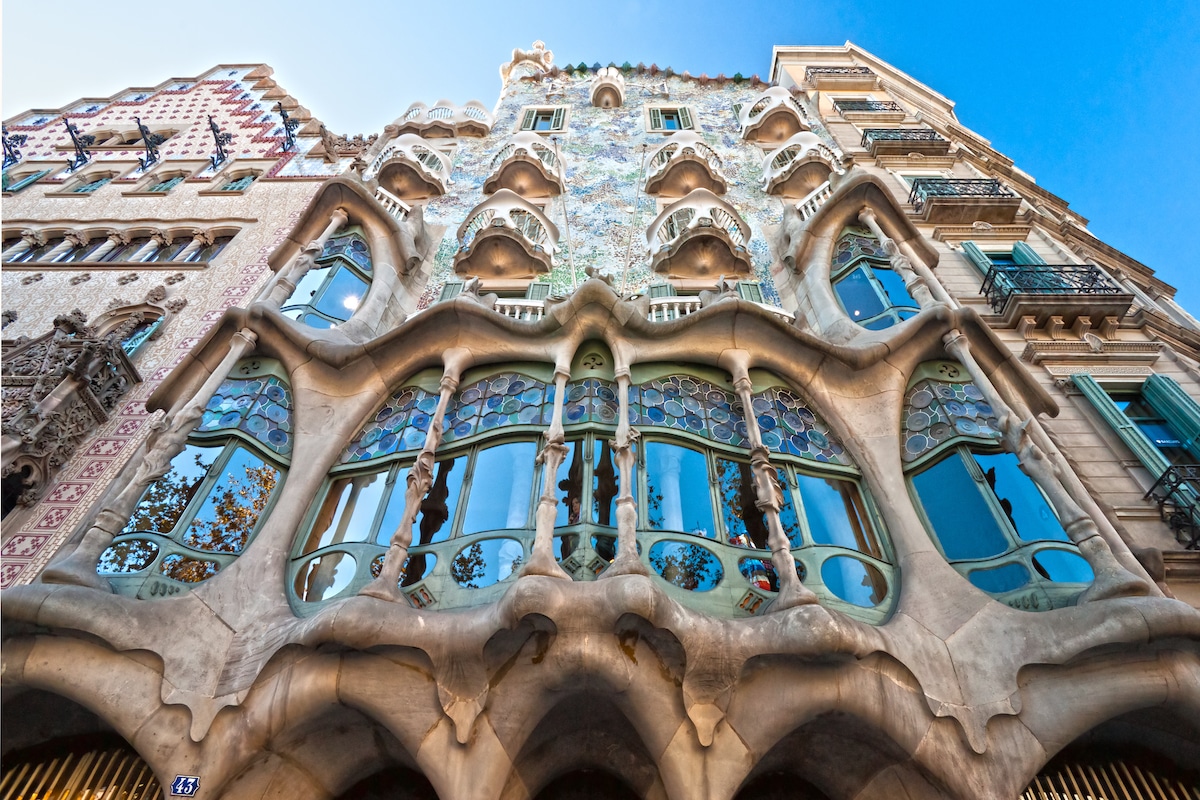 Spanish architect Antoni Gaudí may be the most well-known Art Nouveau architect of all time. One of his most famous buildings is Casa Batlló in Barcelona. It is also known locally as Casa dels ossos, or House of Bones, due to the organic and skeletal qualities of the building. These bone-like building elements are a unique rendition of this architectural style and unlike any of the other examples on this list.

Gaudí’s designs are an example of Modernisme, a Catalan translation of Art Nouveau. Though Casa Batlló takes organic curves a bit more literally than other buildings, it is still full of sculptural elements, irregular forms, and bright colors that characterize art nouveau.

The façade’s color comes from fragments of tiles arranged in a mosaic on a beige backdrop. This colorful building skin widens around grand windows to reveal beautiful teal metalwork—a color and material easily recognizable as Art Nouveau. The roof, however, is less typical of the style. Multicolor shingles cover a dramatic arch that makes the roof appear like the back of a dragon. The sculptural chimney stacks may even symbolize St. George’s sword piercing the back of this dragon.

Though this is a Barcelona-specific design created according to Modernisme idea, it is a very general Art Nouveau idea to incorporate sculpture into the building in a way that makes it act like architecture. Gaudí’s ability to create architecture that acts as a single artistic composition is just one of the reasons he is considered a master of Art Nouveau-style buildings. 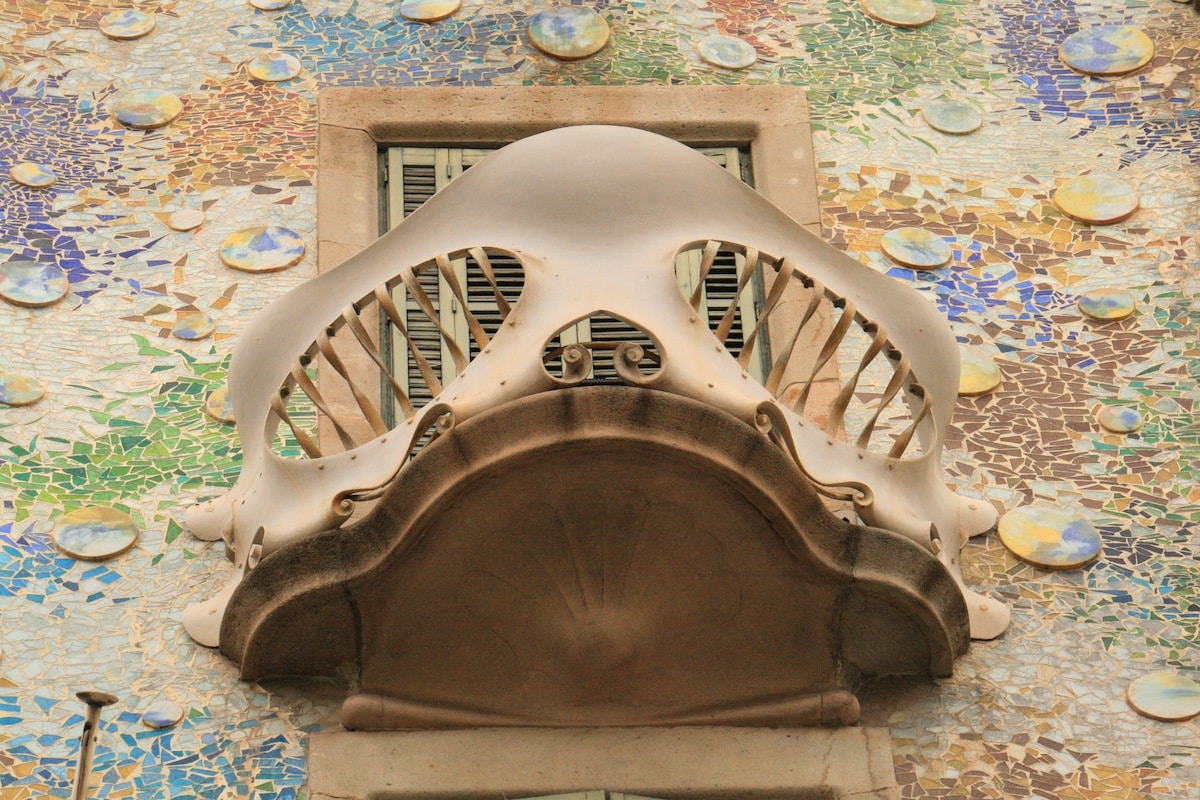 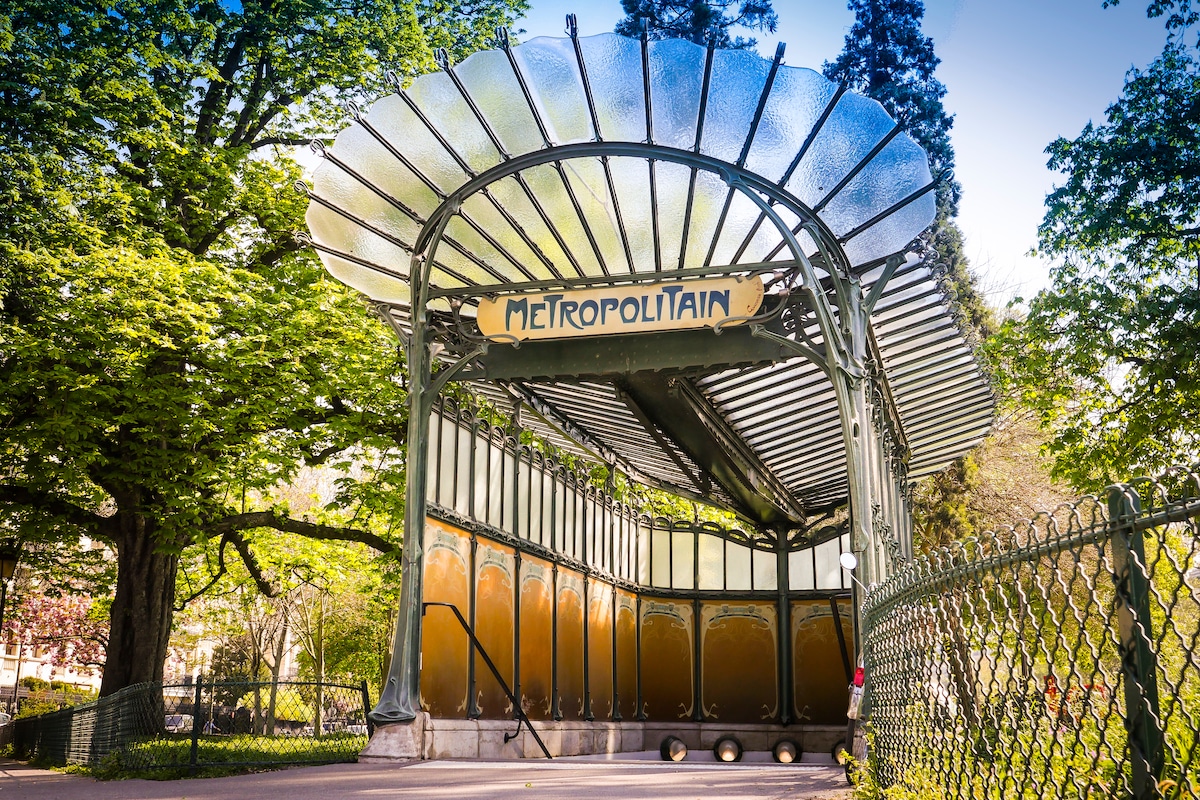 Though not exactly a building, these subway entrances by Hector Guimard are some of the most clearly Art Nouveau structures in the world. The sinuous metal lines seem to perfectly fit in with the organic curves and gestures of Art Nouveau art. The lettering which reads “Metropolitain” is written in the iconic Art Nouveau typeface that appears handwritten, perfectly fitting the decorative art style that celebrated handmade craft.

Some of these entrances are designed as an édicule design, or kiosk, which features a fan-like cover. A more minimal version called entourage, or enclosure, is a symmetrical entrance with two lampposts enclosed in the whimsical metalwork popular of Art Nouveau.

Surrealist artist Salvador Dali spoke lovingly of these structures, saying “those divine entrances to the Métro, by grace of which one can descend into the region of the subconscious of the living and monarchical aesthetic of tomorrow.”

You can continue reading about Guimard and the various styles of his Art Nouveau Paris Métro Entrances. 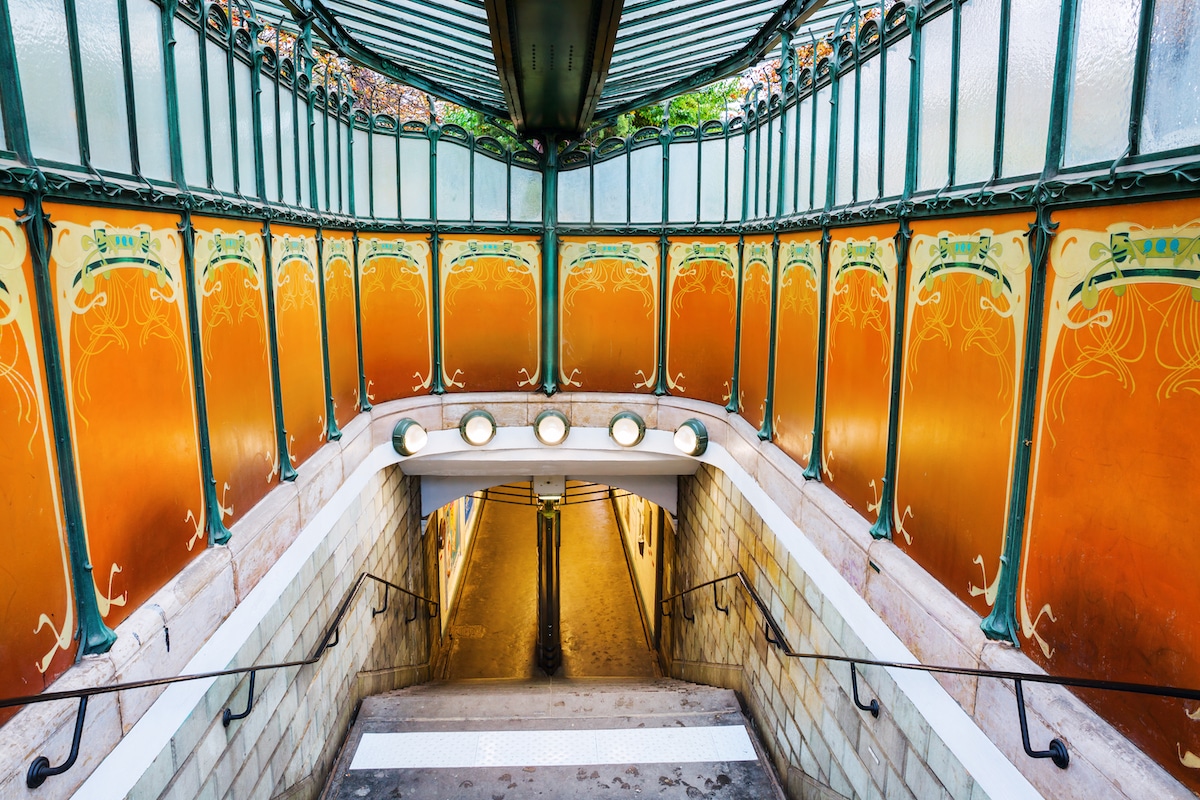 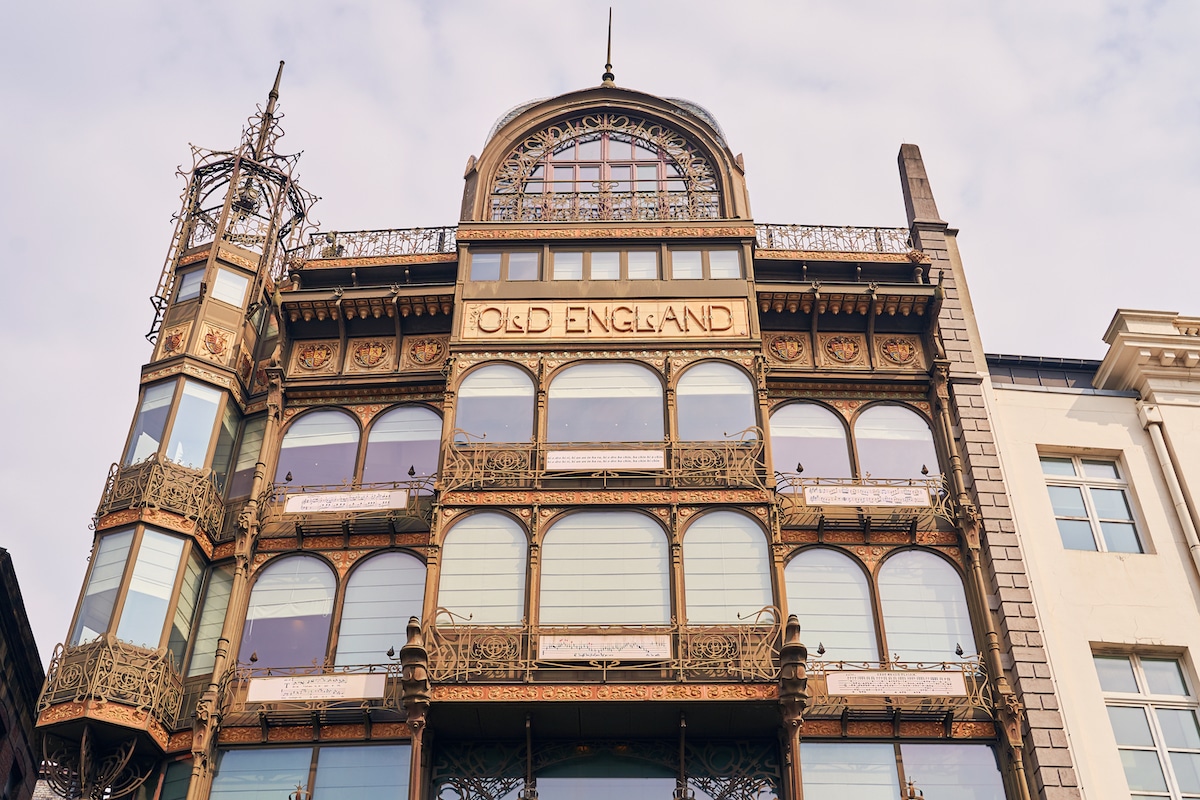 This department store for the Old England brand was designed by architect Paul Saintenoy who was heavily influenced by notable Art Nouveau architects like Victor Horta. You may be able to pick up on some of the main characteristics of the style that he plucked up from these Art Nouveau masters.

Metalwork plays an important role throughout the exterior of the Old England Building. It is used to create intricate ornamentation along the primarily glass façade and in the balconies above. If you look closely at the glass canopy on the first floor, you may find some familiar forms that are also used in another project on this list—the Paris Métro Entrances by Hector Guimard.

Though the Old England Building now houses the Musical Instruments Museum instead of the department store that gives the building its name, the iconic Art Nouveau style sign still prominently reads “Old England” on the main façade. 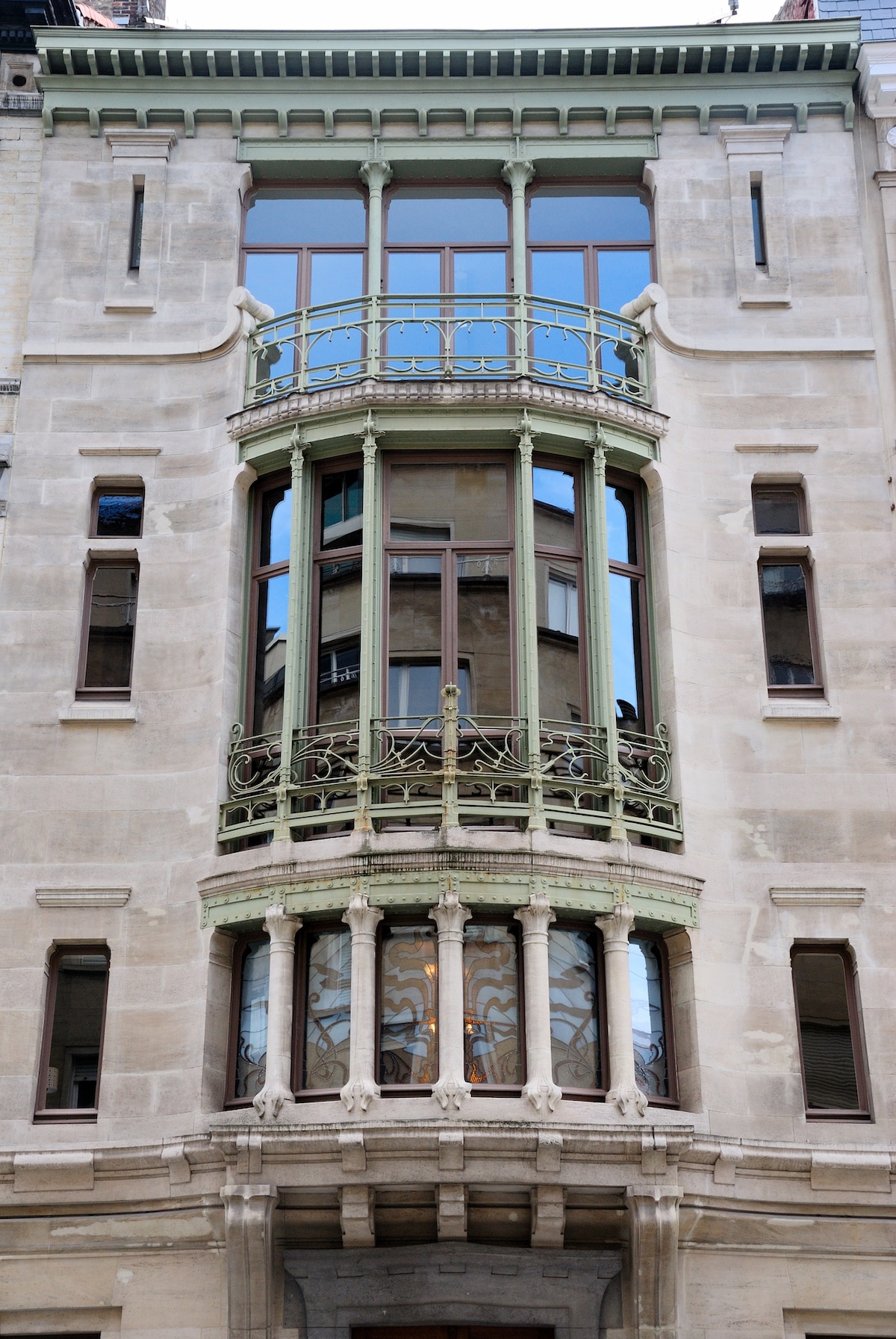 Hôtel Tassel by Victor Horta is one of the most famous examples of Art Nouveau architecture in the world. Images of the iconic interior staircase seem to perfectly describe the ideals of Art Nouveau. The wallpaper, metalwork of the railings, curved designs of the steps, and the overall architectural space all come together to create one artistic work completed with the prescribed freely flowing organic lines. This perfectly represents the design aesthetics of this decorative art movement.

Horta’s floor plan was considered innovative in other ways as well. It opened up the area and extensively used natural light. It was also centered around a central hall from which each room could be accessed. Lastly, the green structure demonstrates that the architecture was capable of being just as decorative as other secondary building elements and that these more utilitarian spaces, like a small hallway, had the potential to be beautiful pieces of architecture when carefully considered.

Since Hôtel Tassel was such an early example of Art Nouveau’s application in architecture, the “rules” of the architectural style were not yet perfectly defined. The building uses Neo-Gothic and Neo-Rococo elements. 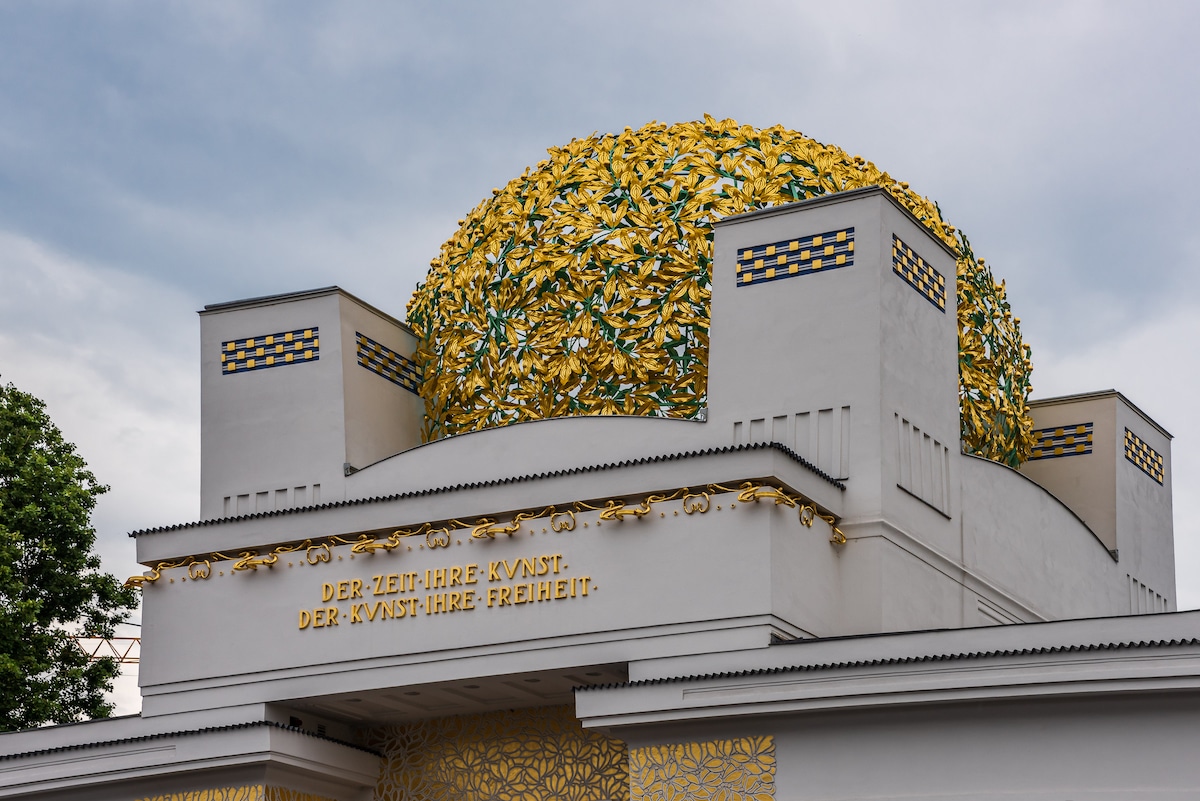 The Secession Building in Vienna, Austria, is a great example of the glamorous gold details often found in Art Nouveau architecture. Aside from its importance as an example of the art movement, this building is also a great example of architecture created as a manifesto. Joseph Maria Olbrich designed it as a statement about the Vienna Secession, where artists resigned from the Association of Austrian Artists when the group refused to abandon traditional artistic styles.

If this story feels familiar, that is because the Vienna Secession art movement held similar beliefs to the more general Art Nouveau—artists were pushing back against art tradition and demanding innovation. This demand is even included on the building itself. Above the entrance reads: “To every age its art, to every art its freedom.”

The three gorgons underneath the motto refer to painting, sculpture, and architecture. Though this symbolism is tied into the Vienna Secession, it also closely aligns with the Art Nouveau motif of using women—most often the faces of women—as ornamentation on architectural work. 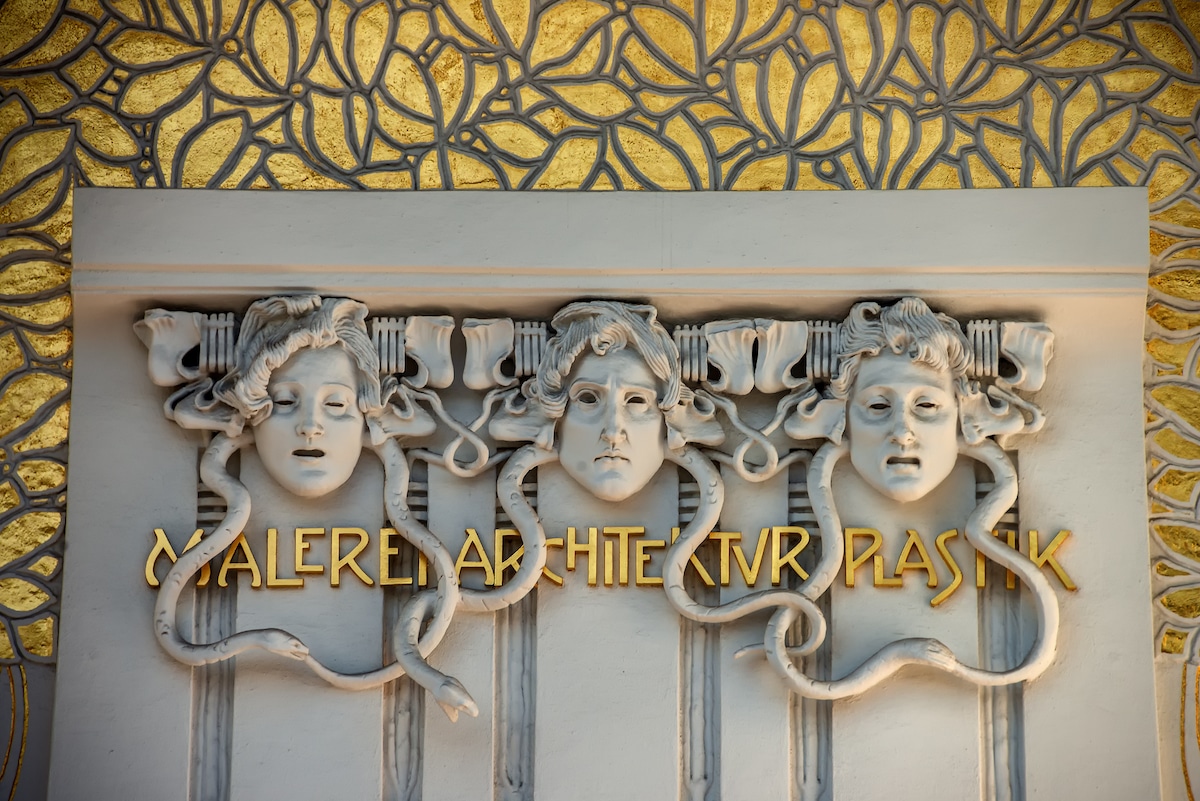 Which is your favorite art nouveau work? Share
Like My Modern Met on Facebook
Get Our Weekly Newsletter
Become a
My Modern Met Member
As a member, you'll join us in our effort to support the arts.
Become a Member
Explore member benefits