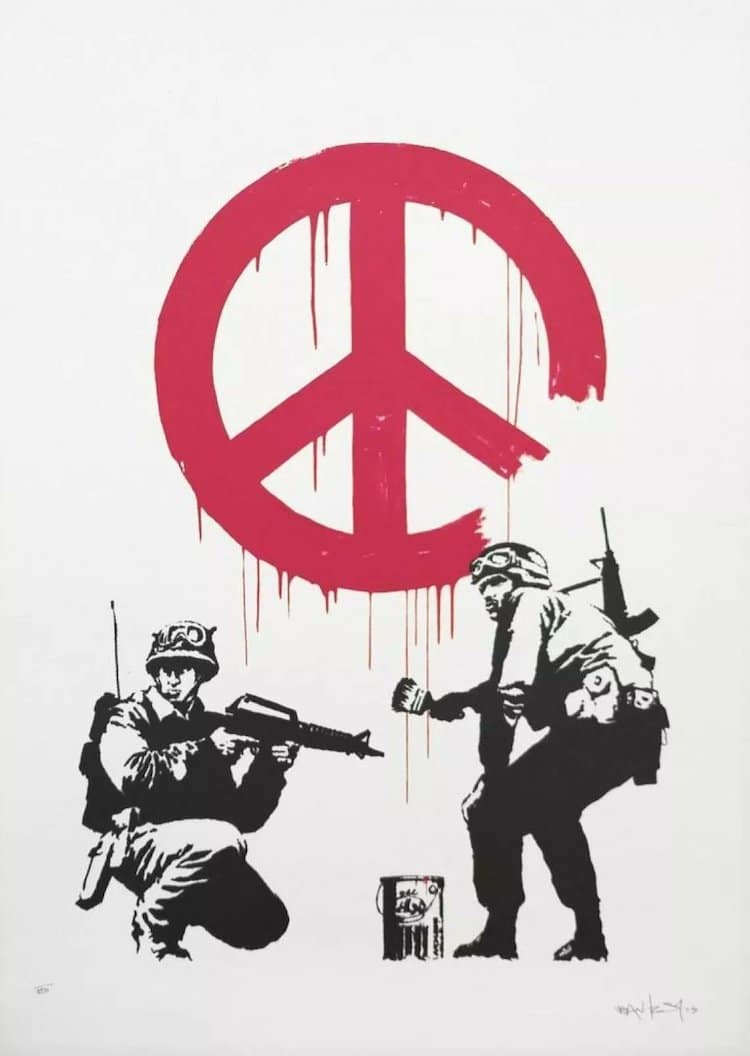 For years, Banksy has used his anonymity to create public art that comments on important social issues. In 2003, he made an anti-war mural entitled CND Soldiers across the street from the Houses of Parliament in London—protesting the UK's involvement in the Iraq war. Two years later, Banksy collaborated with publisher Pictures on Walls in a limited series of 700 silkscreen prints of this piece, half of which are signed by the artist. Recently, one of these rare editions was placed on auction via MyArtBroker by a seller with the intention of raising money for Ukraine, and it raised a total of $106,500.

The acronym CND stands for Campaign for Nuclear Disarmament—a British organization that was initiated in 1957 to advocate for nuclear disarmament. British designer Gerald Holtom designed the “peace symbol” as the logo for the CND in 1958, although it is now seen as a universal symbol for peace. Banksy's CND Soldiers depicts two male figures crouched before a red peace sign they painted onto the wall, implying that UK soldiers should not be fighting in the war.

A print of this kind was estimated to sell between $20,000–$30,000, however, the bidders were clearly inspired by the importance of the cause and invested more into the silent auction. The winning bidder—who also prefers to remain anonymous—donated his final sum of over $100,000 to the largest hospital in Ukraine called the Ohmatdyt Children's Hospital in Kyiv, which has remained active throughout the Russian invasion. Although Banksy took no part in this auction, he would undoubtedly be pleased that his anti-war work of art is helping Ukrainians in need.

Banksy's anti-war print CND Soldiers from 2005 was placed on auction via MyArtBroker.

Thank you to everyone who bid in our silent auction of Banksy’s CND Soldiers. We are thrilled to announce that we raised £81,000/ $106,505 for Ohmatdyt Children’s Hospital in Kyiv.#ABanksy4Ukraine pic.twitter.com/KLxWDicFHW

An anonymous buyer paid $106,500, all of which will be donated to the Ohmatdyt Children's Hospital, the largest children's hospital in Ukraine.