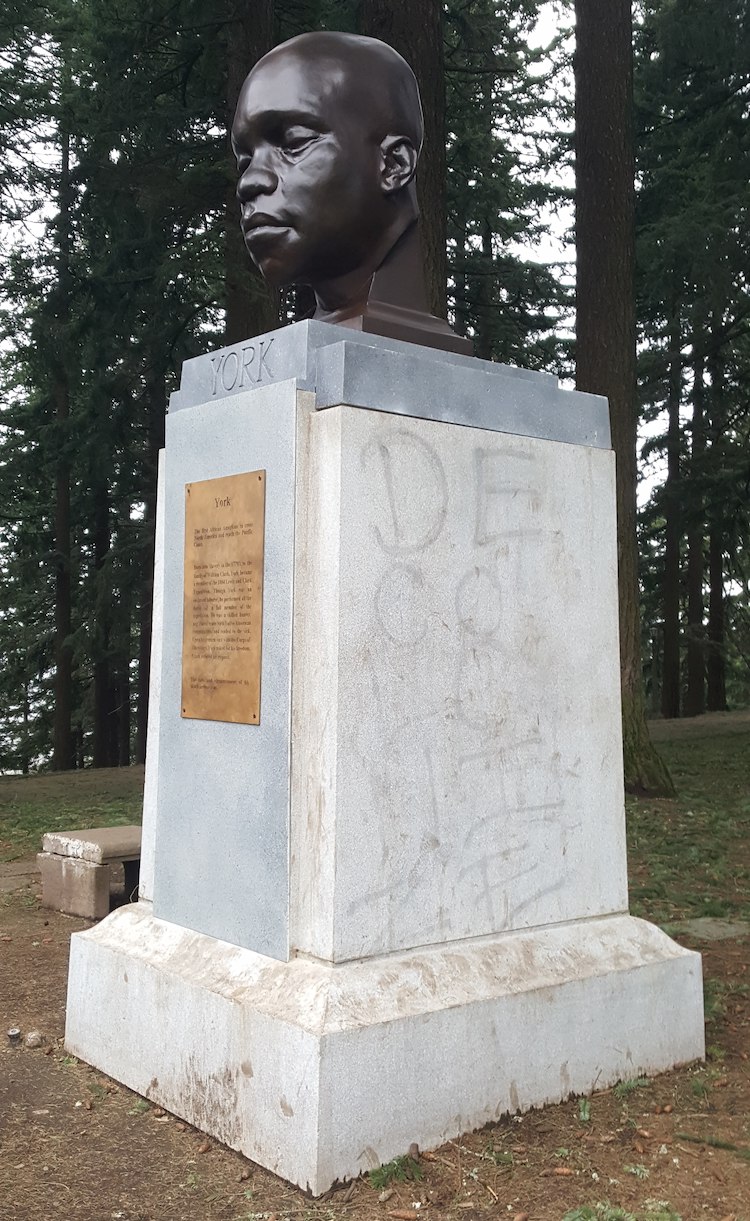 We've seen sculptures spring up unexpectedly in random locations recently—including the mysterious monolith—but there was a particularly poignant pop-up over the past weekend. An anonymous guerrilla artist organized a clandestine installation of a new monument at Mount Tabor Park in Portland, Oregon. The heroic bust depicts York, an enslaved Black man who accompanied Lewis and Clark on their famed westward expedition. Below it is an inscription detailing the known aspects of the man’s life. “Though York was an enslaved laborer, he performed all the duties of a full member of the expedition,” the epitaph reads. “He was a skilled hunter, negotiated trade with Native American communities and tended to the sick. Upon his return east with the Corps of Discovery, York asked for his freedom. Clark refused his request.”

The pedestal where the monument sits was the former home of a statue honoring Harvey Scott—a 19th-century newspaper editor whose conservative opposition to reforms such as women’s suffrage caused his likeness to fall victim during a surge of statue topplings that ensued after the racial justice protests in October 2020. The artist, who wishes to remain anonymous in order to “keep the conversation about the subject,” explains that the bust “pays homage to York at a time when we all need to remember the important role that African Americans have played in our history and reflect on the tragedy of slavery—a tragedy that continues to echo.”

In a statement earlier this week, Commissioner Carmen Rubio voiced her support of the subversive memorial. “The art piece depicting York, the first Black explorer to cross North America, should make all of us reflect on the invisibility and contributions of Black, Indigenous, Latinx and other Oregonians of color—especially artists,” she voiced in a statement on Facebook. “Director Long and I, together with the team at Parks & Recreation, are committed to keeping it in place for the foreseeable future… We should regard this installation for both the important piece that it is, as well as a much-needed reminder to city leaders to hasten our work of rooting out white supremacy in our institutions—particularly our city government, where many processes exclude community participation and discourage engagement.”

Though the installation of this anonymous guerrilla artwork has garnered mixed reviews due to its disregard for the usual public input process that precedes the erection of such a monument, it has been met with general approval and curiosity from the public. According to the policy of the Portland Parks & Recreation department, as long as the statue poses no threat to public safety, it may remain in place for the time being—at least until a more definitive decision is made.

An anonymous guerrilla artist installed a monumental bust of York, an enslaved Black member of the Lewis and Clark expedition, at Mount Tabor Park in Portland.