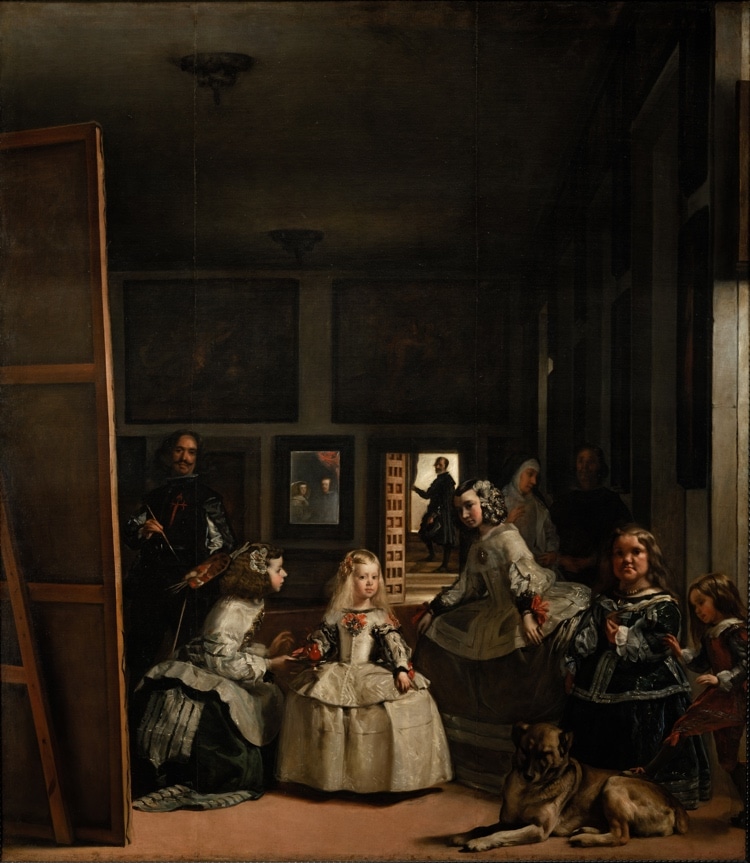 “Las Meninas” by Diego Velázquez, 1656. (Public domain via Wikiart)
This post may contain affiliate links. If you make a purchase, My Modern Met may earn an affiliate commission. Please read our disclosure for more info.

For over 350 years, art lovers have been fascinated by Las Meninas. This complex oil painting by Diego Velázquez is an incredibly nuanced depiction of life in the court of King Philip IV of Spain. Perhaps one of the most important paintings in all of Western art history, this masterpiece from 1656 continues to influence artists today.

The title, which translates to Ladies in Waiting, is a turning point in art history for the way in which Velázquez broke from the stiff formal portraits that typically defined royalty. The large canvas shows Infanta Margaret Theresa, the king's daughter, surrounded by her entourage as Velázquez stands behind an easel painting her portrait.

Now housed in Madrid's Prado Museum, Las Meninas is a highlight of Velázquez's accomplished portfolio of work. But what is it about this masterpiece that has intrigued the public for centuries? What makes it so groundbreaking and what was Velázquez trying to convey through the painting? Let's take a look at what makes Las Meninas so iconic and the legacy that it's left behind.

Who is Diego Velázquez? 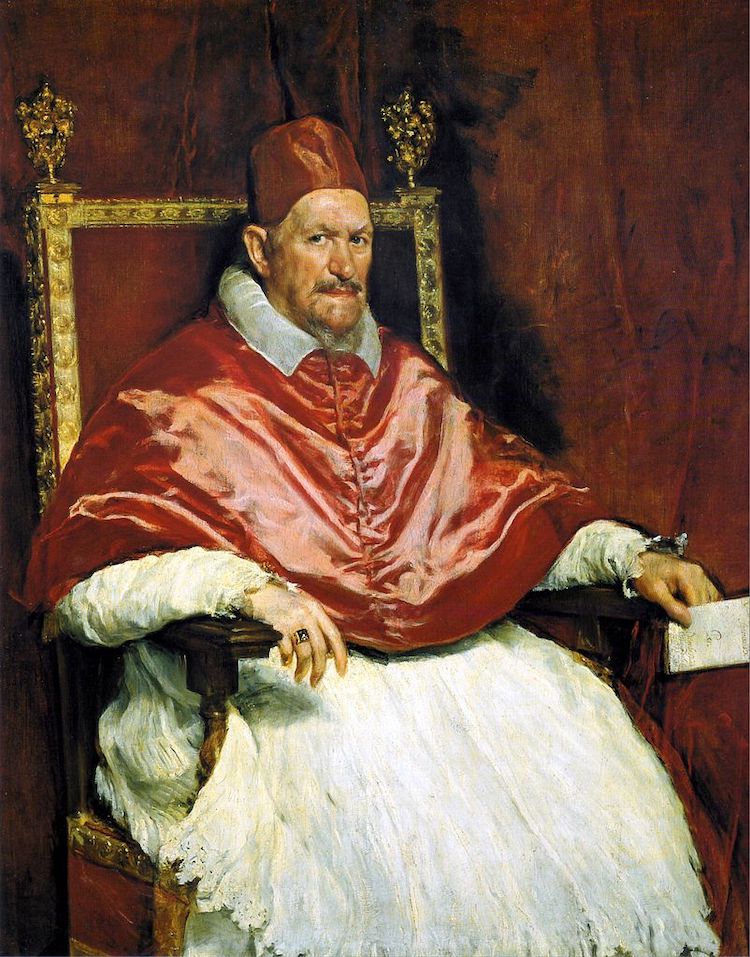 The man behind the painting, Diego Velázquez, was a leading figure through the Spanish Golden Age of art and literature. This explosion of culture in Spain ran parallel to the flourishing of the Spanish Habsburg dynasty. The rise of the Habsburgs and the expansion of the Spanish Empire was fantastic news for an artist like Velázquez, who saw his career take off as the court painter for King Philip IV.

The Spanish painter's career spans the same period as the great Baroque artists of Italy and France, yet he developed his own distinct style. Born in Seville, his early work is filled with scenes known as bodegón. Particular to Spain, these paintings of daily life took place in the kitchen and feature elements of still life.

Velázquez's career took off when he moved to Madrid. When Philip's court painter died, Velázquez filled the role and became increasingly known for his portraiture. Not only was Velázquez able to capture the physical likeness of his subjects, but his use of loose brushstrokes to create texture and movement in clothing was revolutionary. His work would be highly influential to later painters like Manet and the Impressionists, who built on the foundations of what he started. 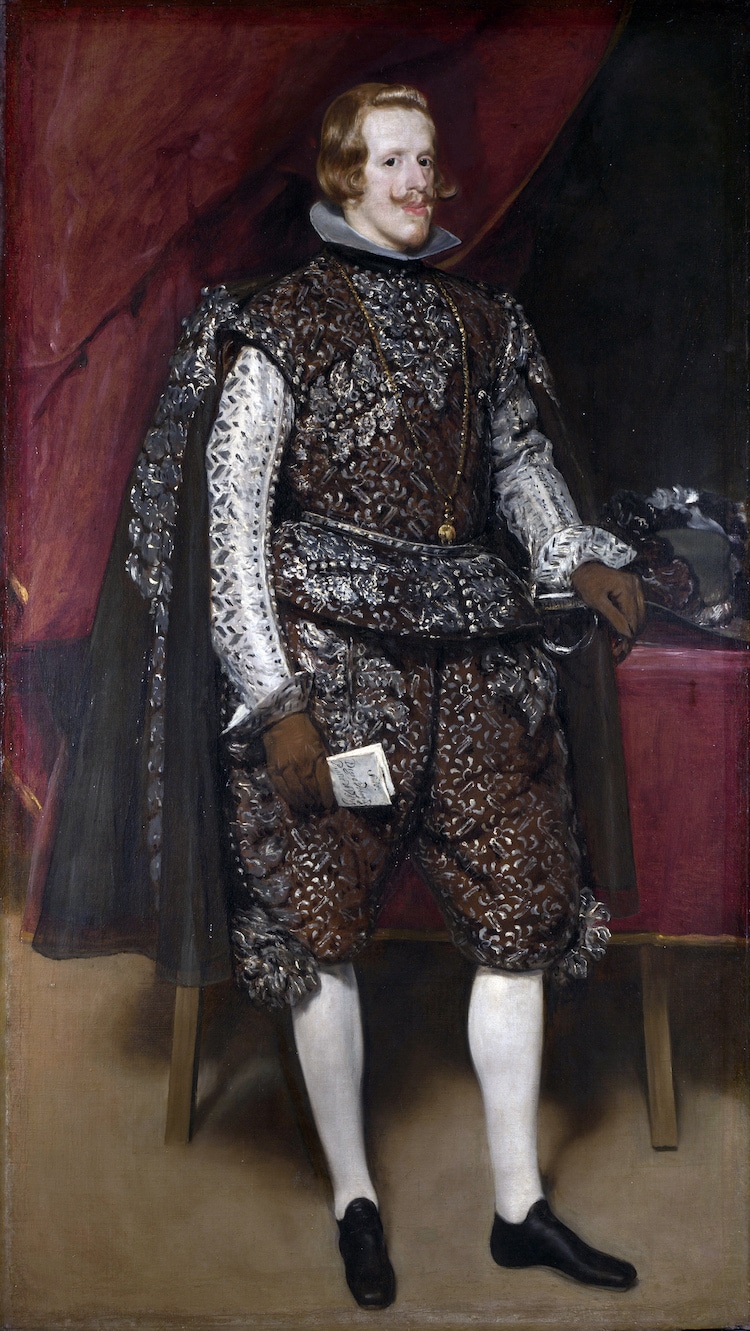 By the time Velázquez painted Las Meninas, he'd been working at the court of King Philip IV for over 30 years. In that time, he'd made himself indispensable and had been by the king's side, as his first wife and their only son had died. At the time of the painting, King Philip had remarried Mariana of Austria, and Margaret Theresa (the young girl at the center of the painting) was their first and only daughter.

Commissioned by Philip, the painting was hung in his private office at his summer palace. Until 1819 it remained in the royal palace, after which time it went into the collection of the Prado Museum. Much of what we know about the painting is owed to Spanish writer Antonio Palomino, who dedicated an entire section of his book on Spanish artists to Las Meninas. He not only gave the year that the painting was created, but also identified most of the people within the canvas. It's also thanks to Palomino that we know that it shows a room located within the Royal Alcázar. This fortress turned palace was the seat of the Habsburg rulers.

With so many people in one canvas, it's vital to understand who each person is and what their role was within the Habsburg court. 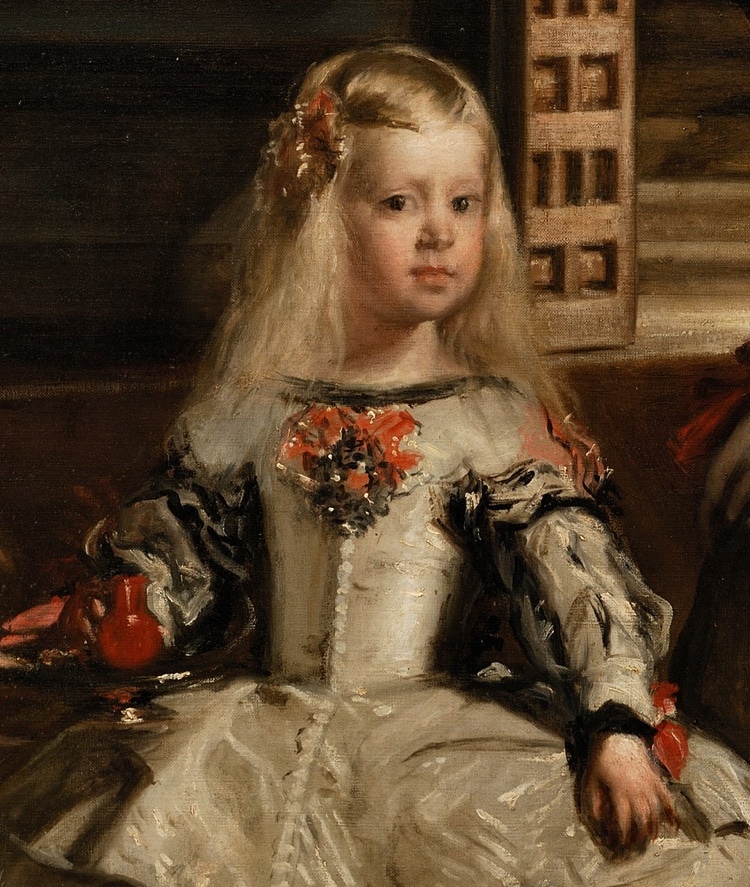 The young princess would have been about 5 years old when Las Meninas was painted. Though Philip had 12 children between his two wives, Margaret Theresa was only one of two to survive into adulthood. She later became the Holy Roman Empress when she married Leopold I. Here she is being attended by two ladies in waiting and dressed in the full splendor that one would expect from a young Habsburg. Interestingly, her gaze doesn't fall on either of her ladies-in-waiting, but directly outward at whoever is standing behind Velázquez's easel. 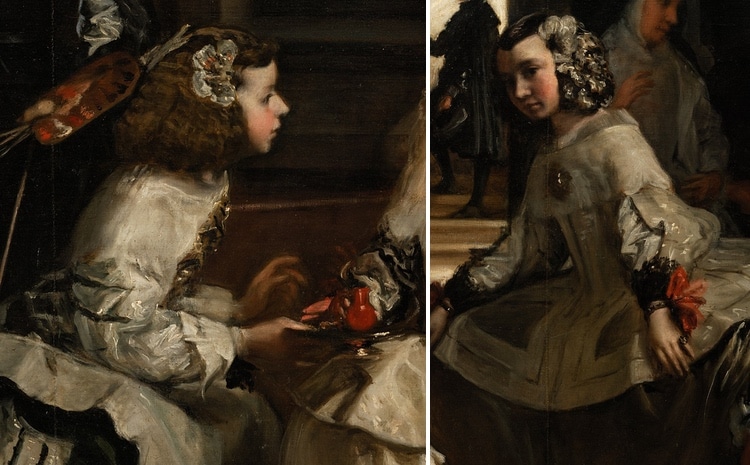 Standing on either side of Margaret Theresa are her ladies-in-waiting (meninas).  Isabel stands on the young princess's left, ready to curtsey. María Agustina instead knees before her and offers her something to drink on a tray. 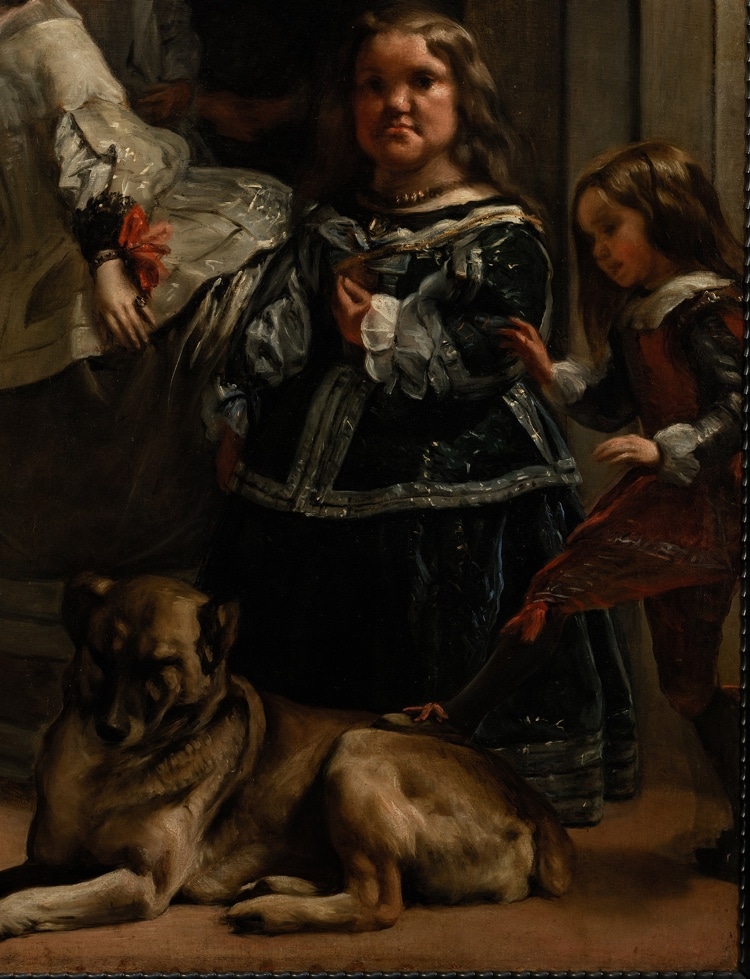 Two dwarves—the German Bárbola and Italian Pertusato—stand on the righthand side of the canvas. Pertusato's foot is placed on the back of a dog, as though he's trying to wake him from sleep. The dog is a wonderful example of a Spanish mastiff, which were bred as guard dogs and protected flocks of sheep. Dwarves had an important role in Philip's court and their prominence is highlighted by Velázquez's numerous portraits of court dwarves. 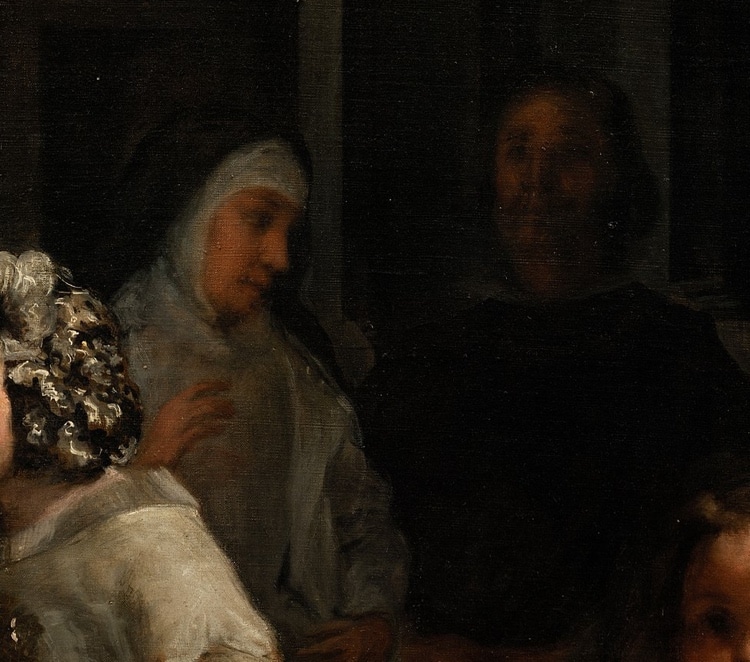 Standing just behind Isabel de Velasco is Margaret Theresa's chaperone Marcela de Ulloa. She is dressed in mourning and chats with an unidentified figure who is probably a bodyguard. 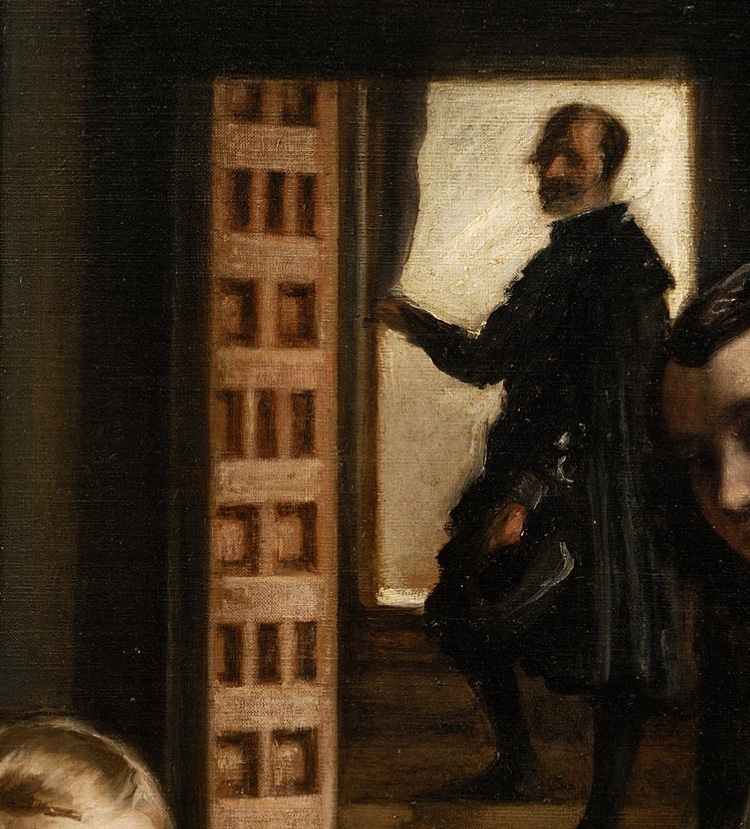 The queen's chamberlain José Nieto is given prominence in the portrait thanks to his placement in the doorway. Nieto was also the head of tapestry works at the court and may have been a relative of Velázquez. It looks as though he is pushing aside a curtain in the doorway, perhaps to let in more natural light while the painter works.

King Philip IV of Spain and Mariana of Austria 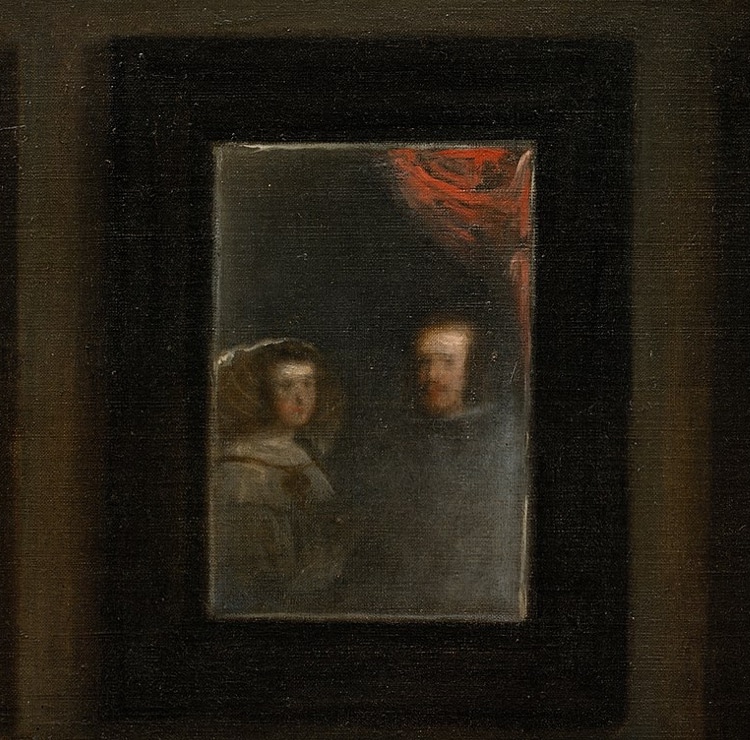 While it may not be immediately clear whom the young Margaret Theresa is looking at, keen observers will notice a couple reflected in the mirror at the back of the room. Here we see the figures of King Philip IV and his queen, Mariana of Austria. And once we consider that we also see Velázquez painting at his easel, things become clearer—she's looking at her parents. The use of mirrors and reflection in the painting is most likely due to the influence of Jan Van Eyck's Arnolfini Portrait. Painted in 1434, this masterpiece of the Northern Renaissance was hung in Philip's palace, so Velázquez would have surely seen it. 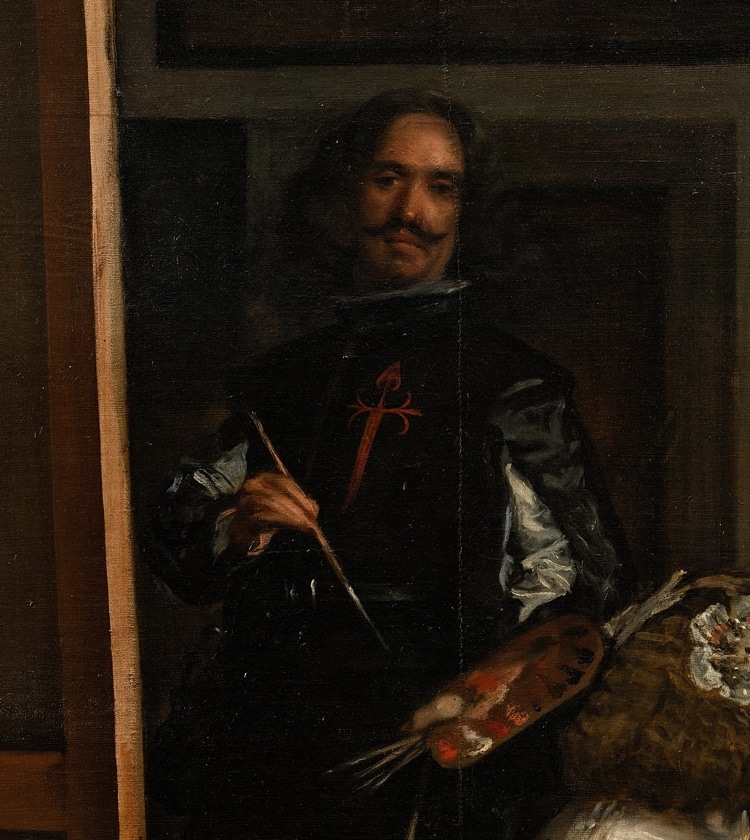 While it's certainly not uncommon for artists to include themselves in paintings—Raphael featured himself in The School of Athens—Velázquez gives his self-portrait a prominent position in the painting. Not only does Las Meninas take place within his painting studio at the Alcázar, but everything in the work revolves around the painter's actions. Working not only as court painter but also as the curator of Philip's expansive art collection, Velázquez's role was vital to the court's cultural life. Here, the Spanish painter shows himself in front of a canvas working on a portrait of the royal couple.

What does Las Meninas Mean? 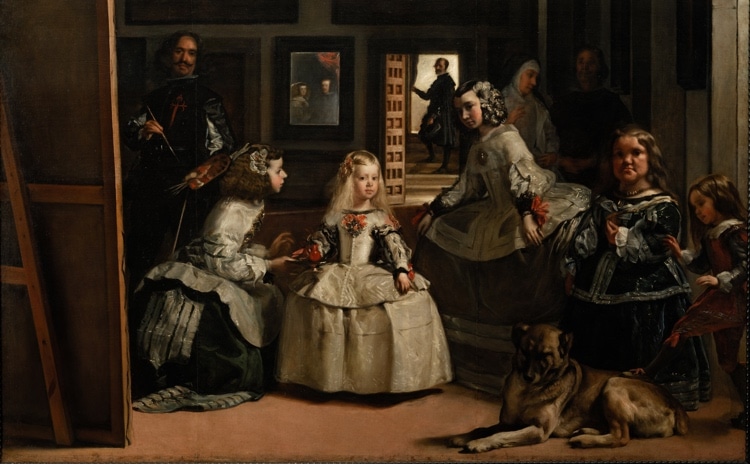 The fascinating painting places viewers in the position of the king and queen. This interesting twist makes whoever is looking at the painting both a spectator and a participant. Of course, originally the spectator would have been Philip, as it hung in his office. Considering this, Las Meninas shows the menagerie of characters who would have been important to the king himself.

Some art historians have seen the work as a way for Velázquez to show off his own importance within the court. By elevating himself beyond the “mechanical” art of painting, he was displaying his worthiness. This would have been important when one considers a small detail in how the artist depicts himself.

The red cross on his chest is the symbol of the Order of Santiago, a prestigious religious and military order. Exceedingly difficult to enter, he was admitted to the order in 1659 upon a decree of the king. While it was once thought that he added the cross to his chest at a later date, new conservation studies show that this was not the case. Could it be that the artist was pushing his own agenda prior to his knighthood?

Art historian Jonathan Brown, a leading expert on Velázquez, has posited another theory. He argues that the painting was made in between when the artist was knighted in 1659 and when he assisted Philip on an important political trip to France in 1660. Brown has theorized that Las Meninas was a sort of thank you gift to King Philip for knighting Velázquez.

Whatever the case, Las Meninas has remained intriguing for the complex game between painter, model, and viewer. Who is looking at who? And why? It's an unsolved mystery that delights art lovers.

The Influence of Las Meninas 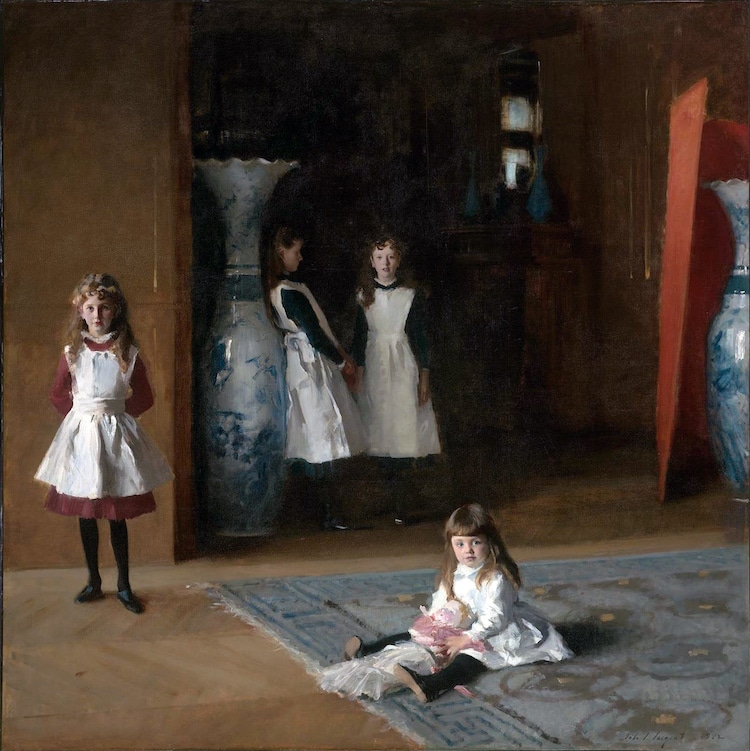 Las Meninas only grew in influence as the work of Velázquez began to gain prominence internationally in the 19th century. Pablo Picasso was particularly enamored with Las Meninas. The Cubist genius painted 58 variations on the work in 1957. Salvador Dalí painted his own homage to the work in 1958 with a piece titled  Velázquez Painting the Infanta Margarita With the Lights and Shadows of His Own Glory. He would continue to return to the theme, painting work inspired by Las Meninas throughout his career.

While Picasso and Dalí's pieces functioned as a direct homage to their fellow Spaniard, other painters took the lessons of Las Meninas and used them to enhance their portraiture. The most famous example is John Singer Sargent's 1882 oil painting, The Daughters of Edward Darley Boit. Sargent's use of space, moving from the dark background to light foreground, as well as his loose brushstrokes and composition of figures were certainly influenced by Las Meninas.