To some, the words “Disney Princess” might bring to mind a classic narrative of a hopeless romantic in search of a perfect prince, ready to swoop in and rescue her from a wicked stepmother, villainous sea witch, or evil sultan. And while modern Disney films are becoming more progressive with their representation of women (with movies such as Frozen and Moana), illustrator Matt Burt has created alternative versions of these role models by reimagining them as empowered career women.

Designed for his client Simple Thrifty Living, Burt worked with the team to decide what dream careers each princess would have. He explains, “I worked with my coworkers at Simple Thrifty Living to determine what careers the princesses might have based off of their personalities and the events of the movies. We knew we wanted these women to be in strong roles so it was a matter of not only choosing a career that would fit them from a backstory standpoint but also one that would fit the theme of the project.”

Burt’s illustrations see Cinderella as an animal rights activist, Belle’s a university chancellor, and Snow White is a leading psychologist. The artist reveals, “To many people, the Disney princesses have become so much more than just characters in movies. I wanted to create these to inspire others in hopes that they can find a career that they love and a career that makes a difference.”

Each illustration comes with an inspiring back-story for how each imaginary female character made it to the top. For example, Ariel (The Little Mermaid) is re-imagined as a pop star and record producer—Burt writes, “Ariel has always excelled in music, having natural talent and a passion for singing. Considered the best of her talented sisters, Ariel took her skills and made it her career. She went multi-platinum with her single, ‘Part of Your World,’ and now both writes her own music and is a producer at her own label, Seven Seas Records.”

Illustrator Matt Burt reimagines iconic Disney Princesses as empowered career women. Read on to discover how they made it to the top. 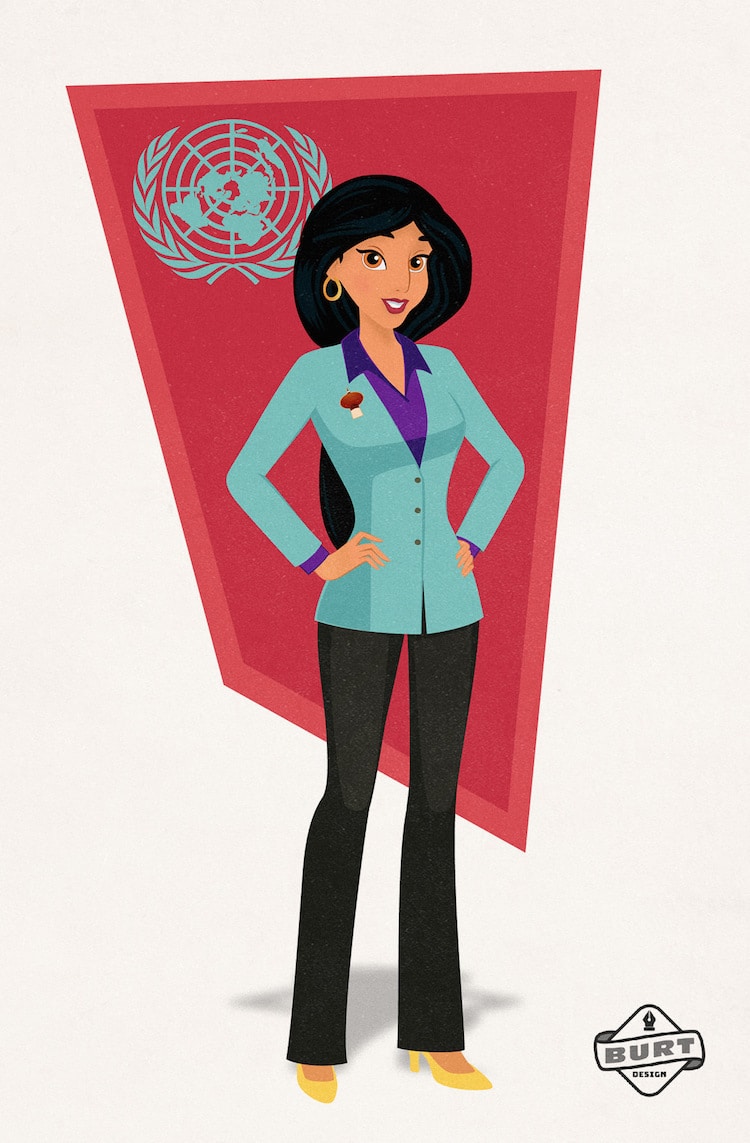 Jasmine – UN Ambassador.
“Jasmine has always fought for what’s right and for change where it is needed — she’s not a prize to be won. A natural politician, she now advocates for her country of Agrabah at the United Nations. One of her primary initiatives is protecting women’s rights by ensuring that women are treated fairly across the globe.” 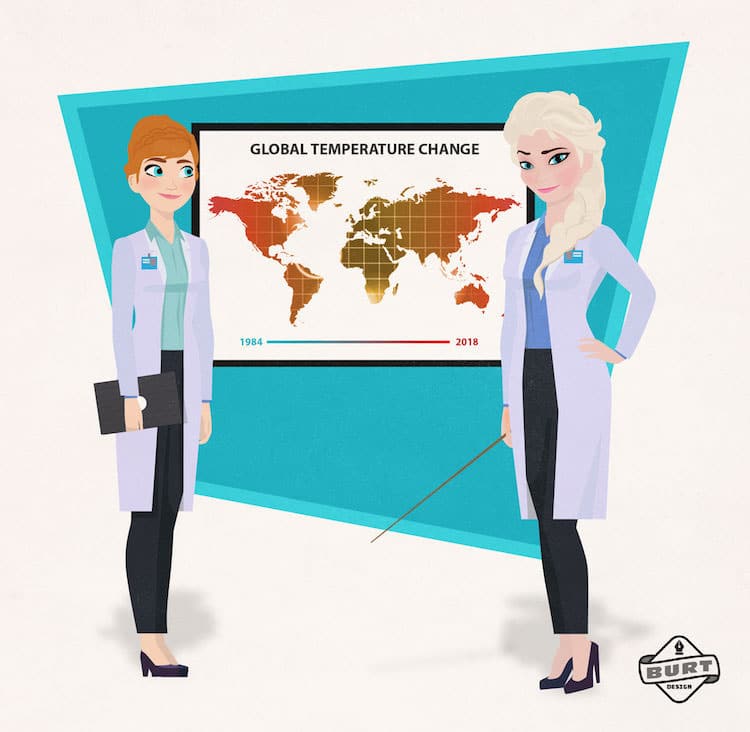 Elsa and Anna – Climate Change Scientists.
“Elsa, Anna, and the citizens of Arendelle know a few things about the effects of climate change. While their companion Olaf may love summer, the sun, and all things hot, Anna and Elsa recognize what a rising global temperature might mean. They have dedicated their careers to studying climate change and presenting accurate, well-sourced information.” 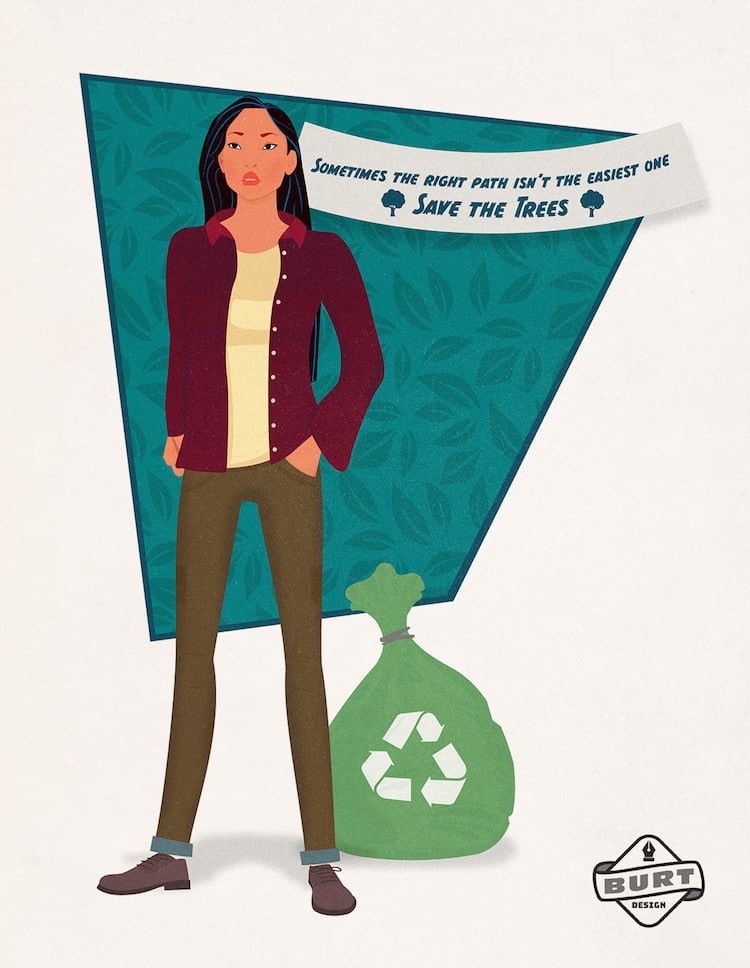 Pocahontas – Head of a Non-Profit Focused on Protecting the Environment.
“Pocahontas knows that we’re all connected to each other and is committed to protecting nature and what is just around the riverbend. She heads a non-profit organization committed to preserving and protecting the environment. Through a combination of activism, action, and promoting awareness, she fights for protection and sustainable use of our natural resources.” 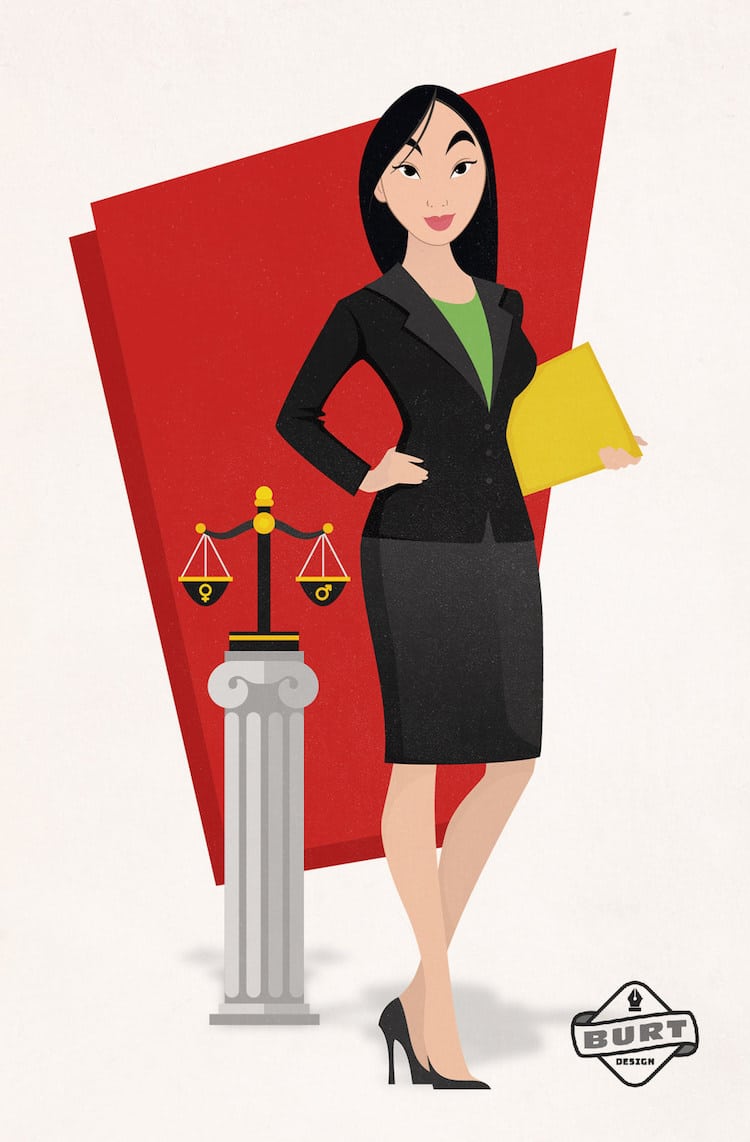 Mulan – Title IX Lawyer.
“After experiencing discrimination both personally and in the military, Mulan turned her sights on a law degree, graduating with the highest honors. She now fights for equality on university campuses, ensuring that men and women are given the same treatment and opportunities. With all the strength of a raging fire, she advocates for those who have faced adversity due to their gender.” 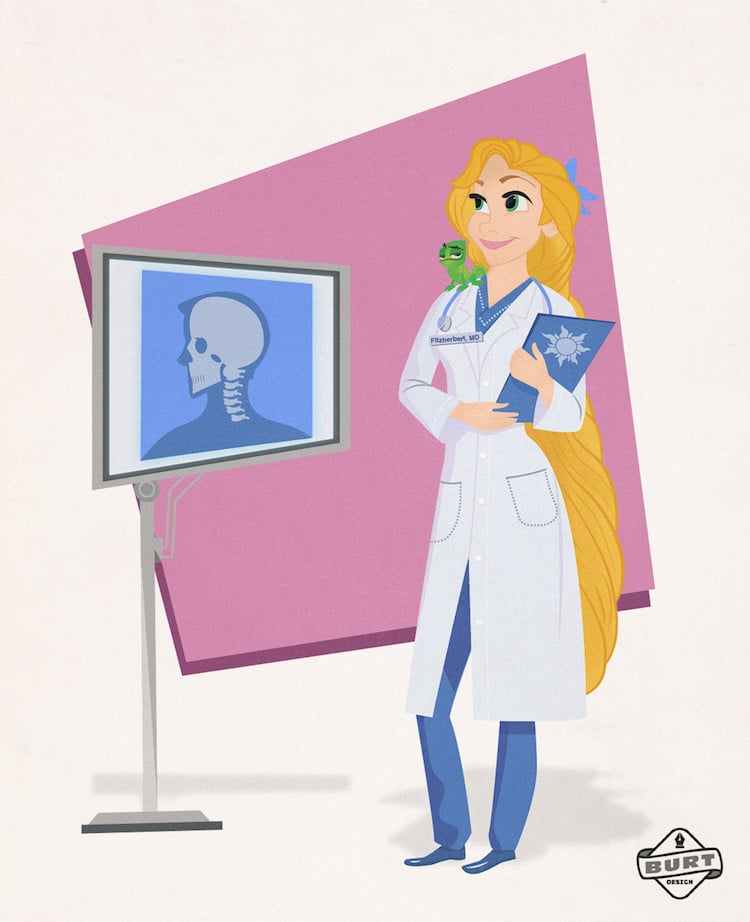 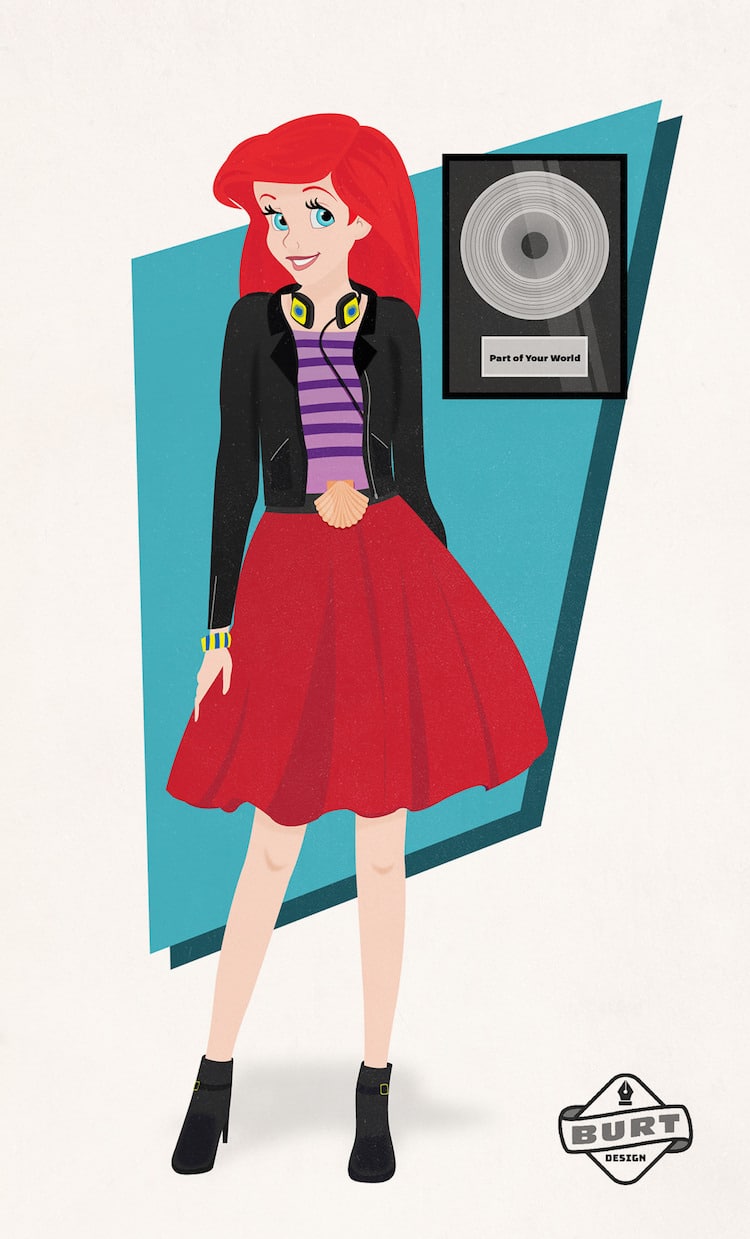 Ariel – Pop Star and Record Producer.
“Ariel has always excelled in music, having natural talent and a passion for singing. Considered the best of her talented sisters, Ariel took her skills and made it her career. She went multi-platinum with her single,'Part of Your World,' and now both writes her own music and is a producer at her own label, Seven Seas Records.” 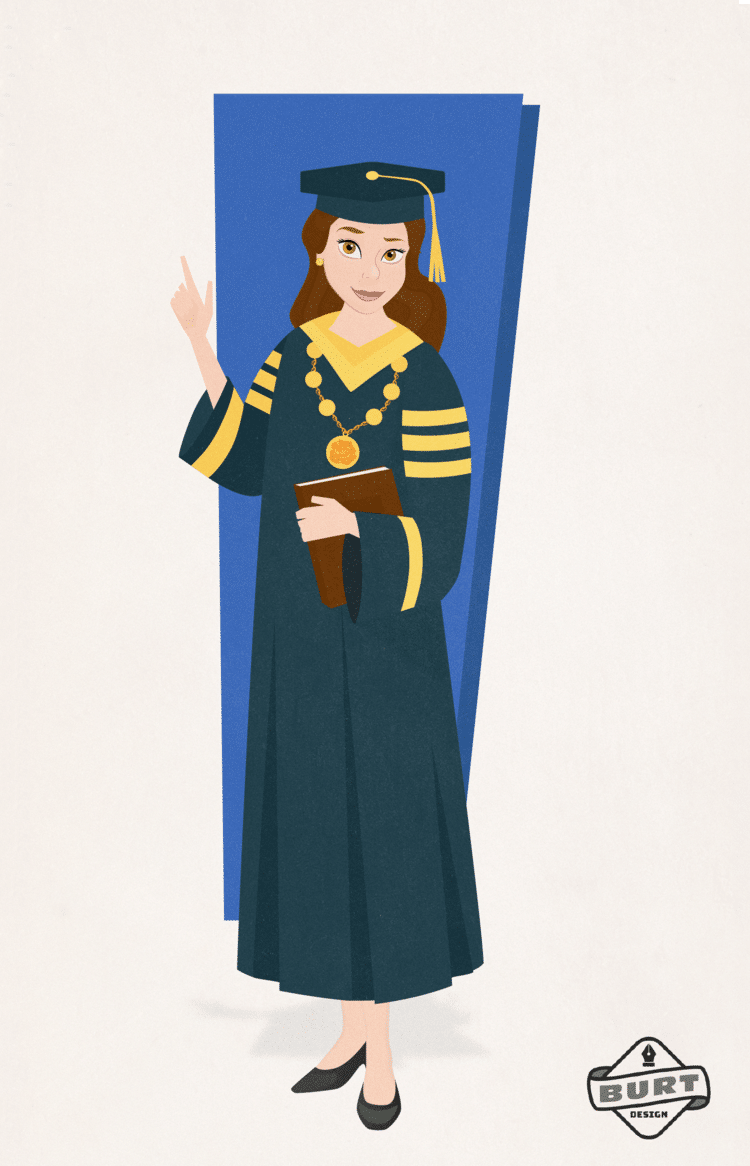 Belle – University Chancellor.
“There was always much more in store for Belle than a provincial life. Inspired by her love of books and knowledge, Belle went into academia. After receiving her doctorate in education, Belle has risen to the level of chancellor at a major university. She is committed to affordable and equal education for all.” 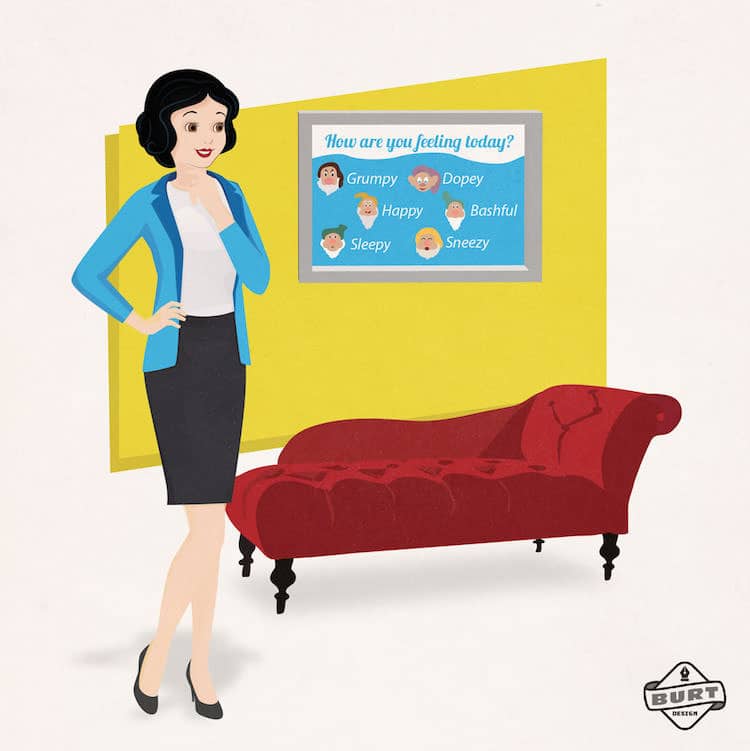 Snow White – Leading Psychologist.
“Snow White has always been known for being caring, thoughtful, and someone willing to lend a hand to those in need. Using these strengths paired with hard work, she earned her doctorate in psychology and is one of the leaders in the field of mental health. She presents her research at conferences throughout the year but always takes time to provide the best care to her clients… whether they’re feeling happy, bashful, grumpy, or anything else. It’s her mission to not only help her clients but also support other mental health professionals so they can offer their clients top-notch care.” 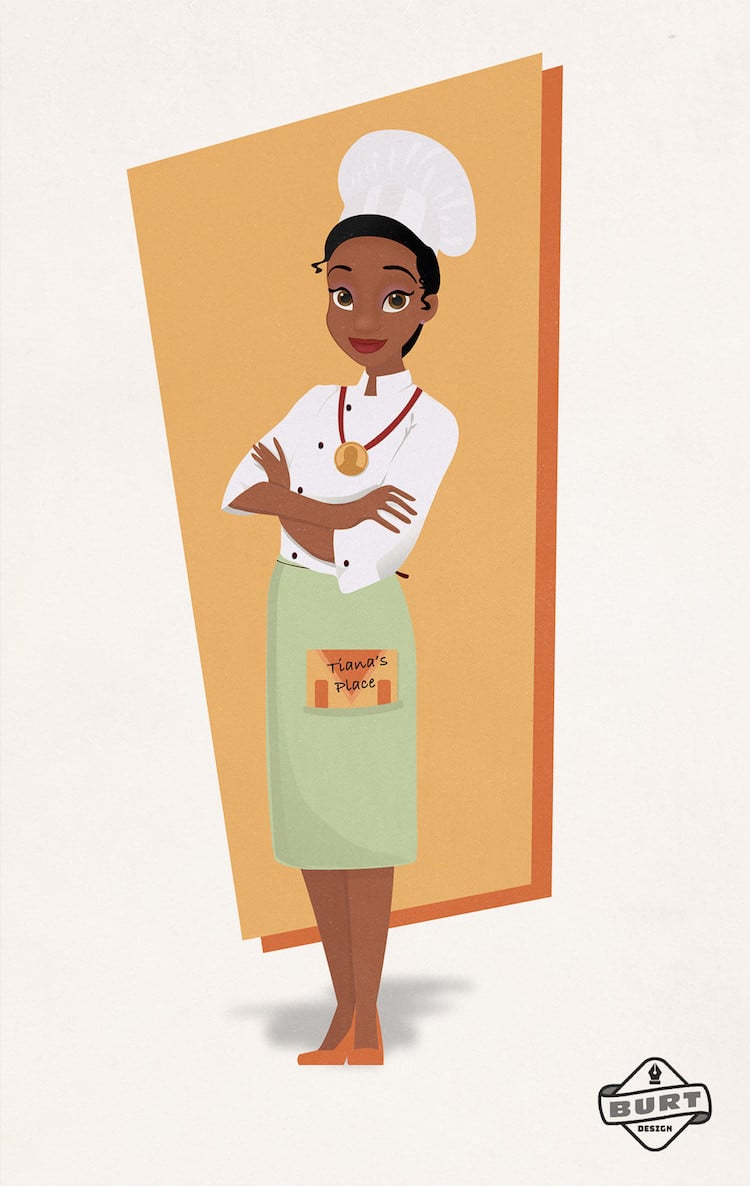 Tiana – James Beard Award-Winning Chef and Restaurateur.
“Growing up and being inspired by her father’s love of cooking, Tiana has always known what she has wanted to do. She now stands at the top of the culinary world, winning the James Beard Award and owning one of the most popular restaurants in the country. Every day she digs a little deeper, trying out new dishes and experimenting with new recipes and flavors.” 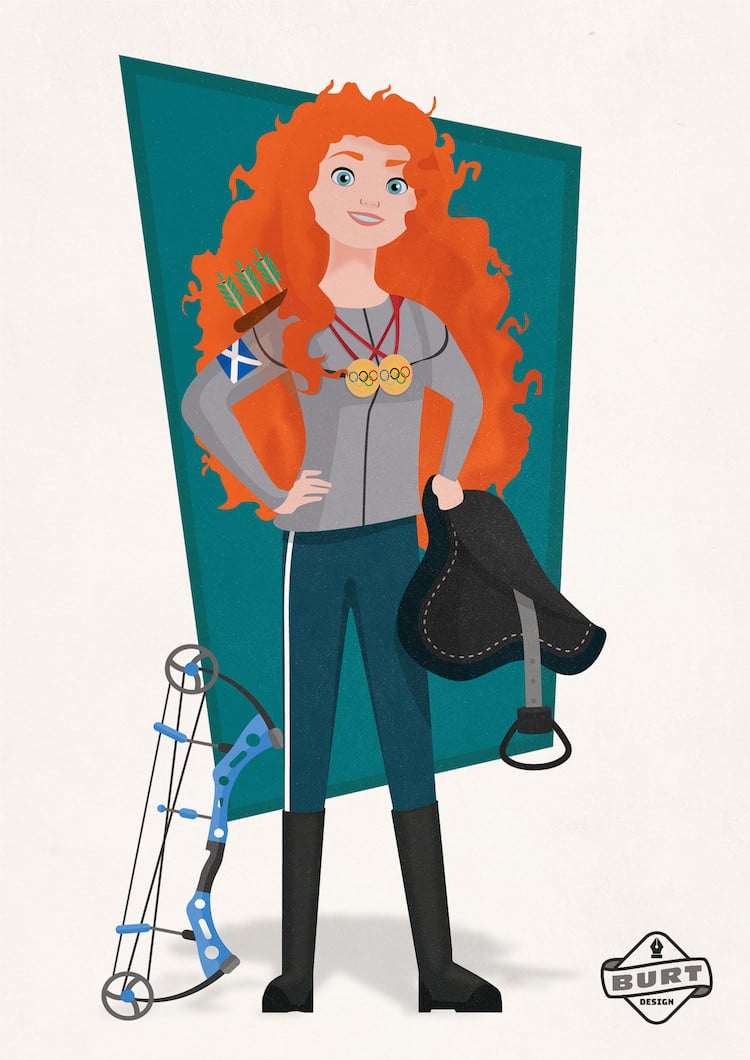 Merida (Brave) – Two-time Olympian (Archery & Equestrian).
“Merida competed for her own hand in marriage, so why not for a gold medal in the Olympics? Skilled in both archery and horseback riding, Merida competes for her country in multiple events. She’s already won multiple golds, but aims to add a few more in the 2020 Olympic Games in Tokyo.” 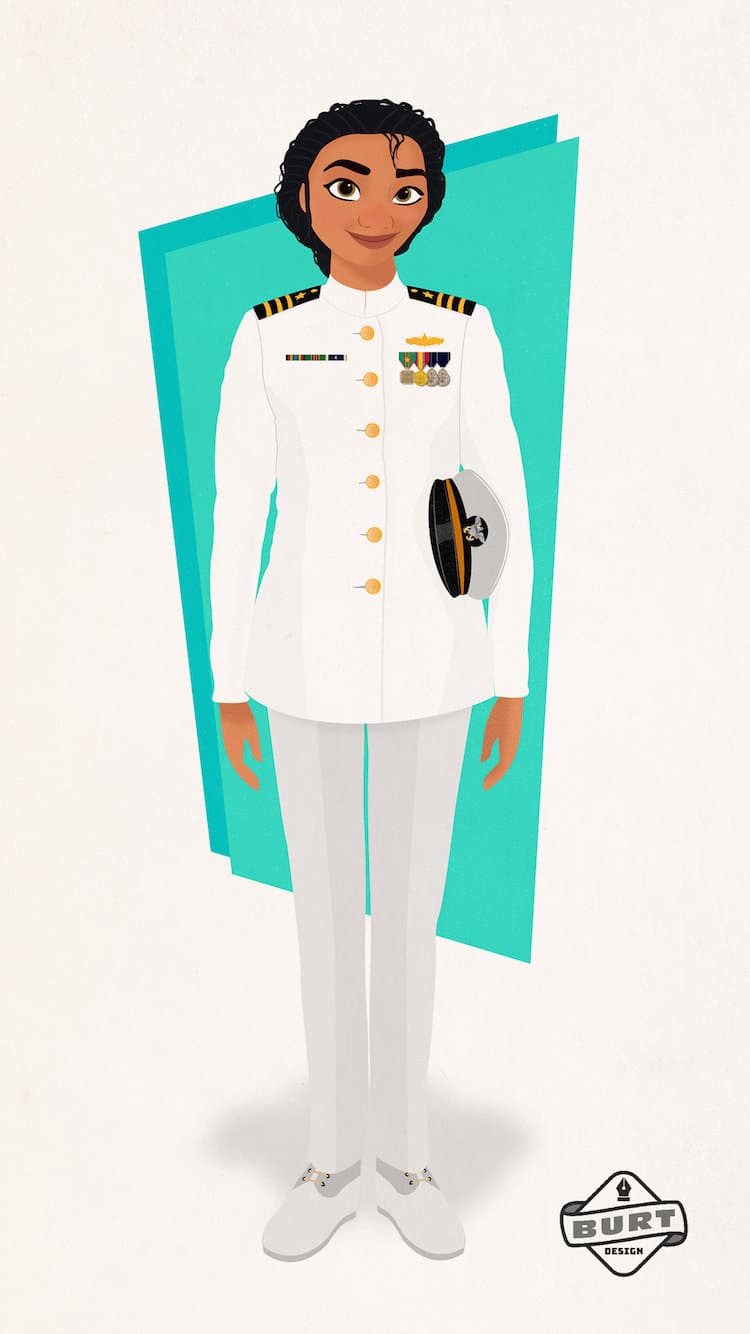 Moana – Officer in the Navy.
“The sea has always called to Moana. What it taught her is that she is a natural leader, guiding her people and returning them to their ancient voyaging traditions. Using these strengths, Moana has excelled in the Navy, rising to the rank of lieutenant commander. She has been awarded multiple honors during her service, such as two Navy Achievement medals and a National Defense Service Medal. With such a successful start, there’s no telling how far she’ll go in her career.” 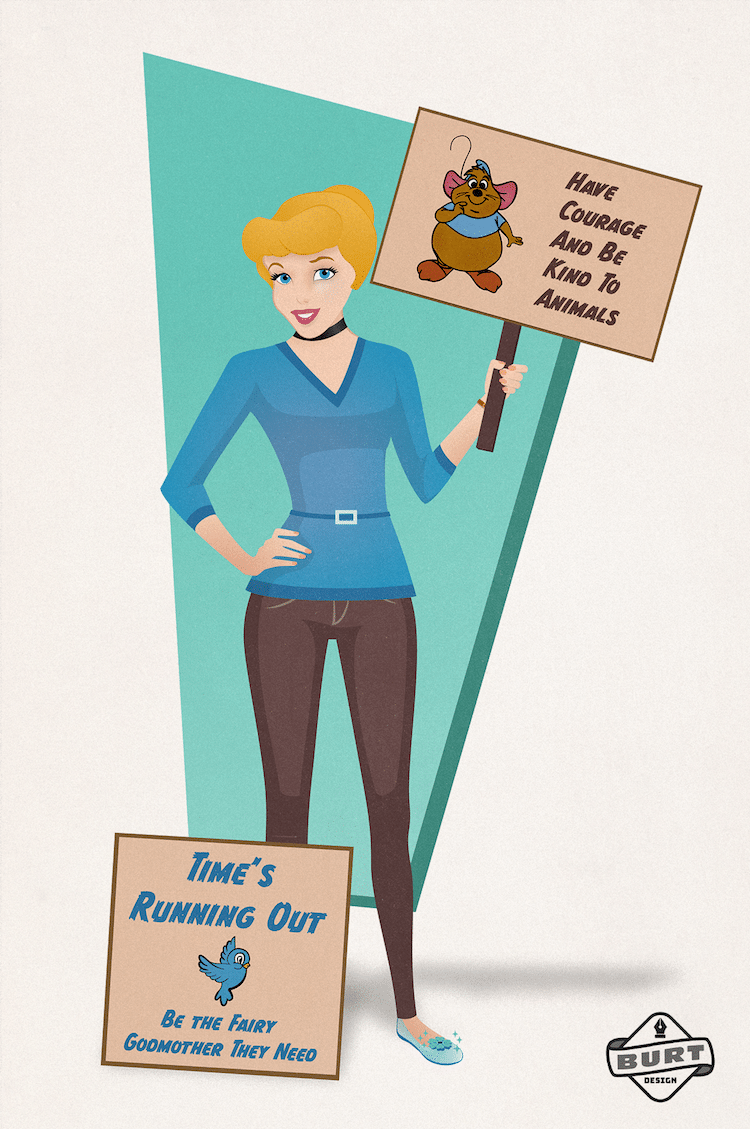 Cinderella – Animal Rights Activist.
“While she has her Fairy Godmother to thank, Cinderella would not be where she is without the help of her animal companions. She believes where there is kindness there is goodness, and it’s her heart’s wish to see animals treated with respect. She used her position of influence to found a non-profit organization committed to promoting animal rights.” 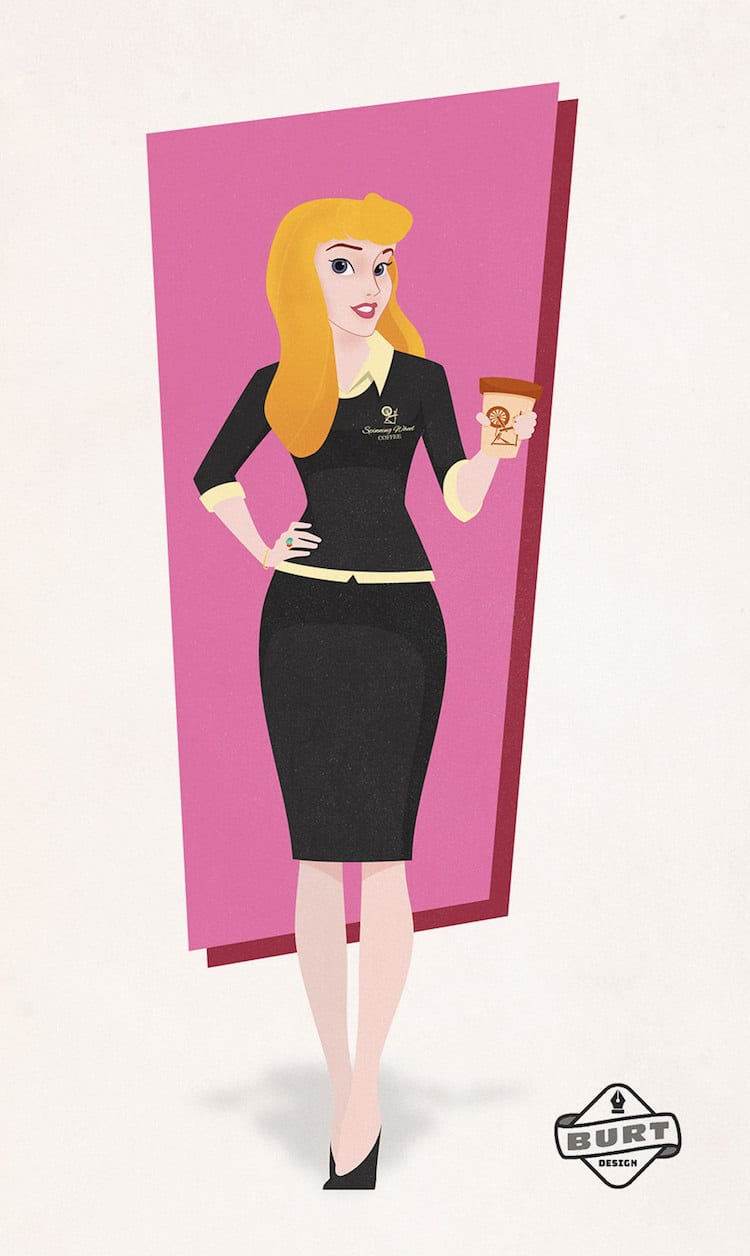 Aurora (Sleeping Beauty) – Coffee Company CEO.
“Aurora knows how hard it is to wake up. After being awoken from her enchanted sleep, Aurora made it her career to help others stay awake — and what better way to do that than coffee! Aurora is the founder and CEO of Spinning Wheel Coffee, one of the leading coffee chains in the nation.”

My Modern Met granted permission to use photos by Matt Burt.