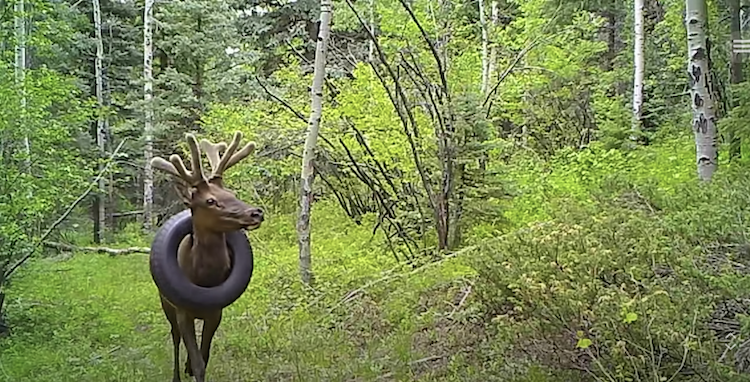 There are countless instances in which sea creatures get tangled in plastic waste; sadly, land animals also face the danger of man-made objects in their environments. In Colorado, a young elk spent two years with a rubber tire around its neck, until it was recently freed by wildlife officials.

It’s unknown how exactly the four-and-a-half-year-old bull elk managed to get a tire stuck around his neck, but it was integral to remove it as soon as possible. The burdened elk was first spotted in 2019, when officers from Colorado Parks and Wildlife (CPW) were conducting a population survey of Rocky Mountain bighorn sheep and mountain goats in the Mount Evans Wilderness. The officers made it their mission to find the elk and remove the tire, but it was no easy feat.

“Being up in the wilderness, we didn't really expect to be able to get our hands on the elk just because of the proximity or the distance away from civilization,” CPW officer Scott Murdoch said in a press release. “It is harder to get the further they are back in there and usually the further these elk are away from people, the wilder they act. That certainly played true the last couple of years, this elk was difficult to find, and harder to get close to.”

Since the initial sighting in 2019, the elk has been captured numerous times on trail cameras, still towing the tire. Although the tire didn’t seem to be hindering the elk’s ability to eat or drink, wildlife officials feared the animal would become tangled in trees, fencing, or even another elk’s antlers. It wasn’t until this year, when the elk and its herd moved towards residential areas, that newly reported sightings led to it finally being located by the wildlife officials.

On Saturday, October 9—after four failed attempts that same week—Murdoch and CPW officer Dawson Swanson safely tranquilized the 600-pound animal, cut off its antlers, and removed the tire. “It was not easy for sure. We had to move it just right to get it off because we weren't able to cut the steel in the bead of the tire,” Murdoch recalls. “We would have preferred to cut the tire and leave the antlers for his rutting activity, but the situation was dynamic, and we had to just get the tire off in any way possible.” Luckily, the elk will grow a new set of antlers by springtime.

Swanson and Murdoch estimate that the elk lost 35 pounds with the removal of the tire, since it was filled with around 10 pounds of debris. Despite carrying the heavy load for two years, the elk was in surprisingly good condition, and was back on his hooves in no time. “The hair was rubbed off a little bit. There was one small open wound maybe the size of a nickel or quarter, but other than that it looked really good,” says Murdoch. “I was actually quite shocked to see how good it looked.”

The elk’s story is a reminder to those living near wildlife to keep items like tires, nets, and clothing lines out of reach of vulnerable animals.

Watch a video of the elk’s rescue below.

After several failed attempts, wildlife officers finally removed a tire that was stuck around an elk’s neck for over two years.

Here is some video of this bull elk over the past two years. pic.twitter.com/R6t9nNPOyb

We first learned of this elk with a tire around its neck in July 2019 when wildlife officer Jared Lamb saw it during a survey near Mount Evans. In this video, wildlife officer Scott Murdoch discusses the situation & what it would take to remove the tire.https://t.co/Frwi3kaXlc pic.twitter.com/xRrZ9nNChw

The saga of the bull elk with a tire around its neck is over. Thanks to the residents just south of Pine Junction on CR 126 for reporting its location, wildlife officers were able to free it of that tire Saturday.