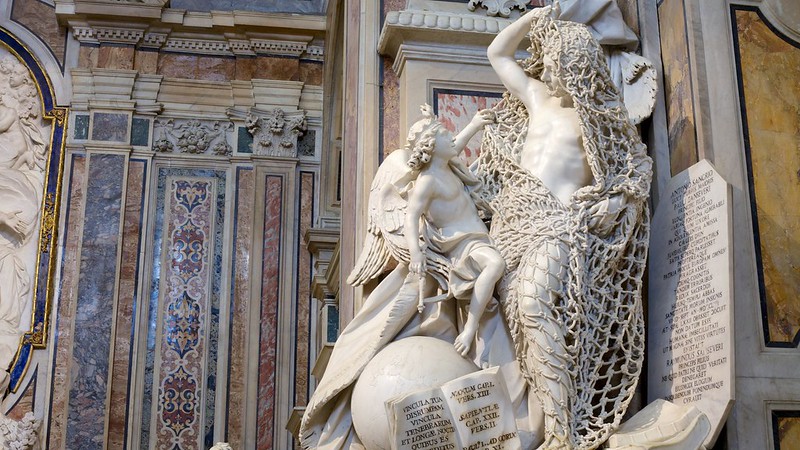 ‘The Release from Deception' (1754) by Francesco Queirolo

For centuries, sculptors around the world have adopted marble as their medium of choice. In order to both illustrate marble's carving capabilities and showcase their own sculpting skills, these artists often select subjects that require a certain level of expertise. These challenging motifs include anatomical details, dynamic drapery, and, in the case of Il Disinganno, delicate netting. Every piece of this incredible sculpture is carved out of marble, including the carefully crafted knots in the draping net wrapped around the large figure of a fisherman.

Il Disinganno, also known as The Release from Deception, was crafted by Genoese artist Francesco Queirolo in the 18th century. Widely regarded as his pièce de résistance, this sculpture has solidified Queirolo's legacy as one of Italy's leading 18th-century artists.

The Release from Deception

The Release from Deception depicts a scene that is both biblical and allegorical. It features two subjects: an angel and a fisherman. The angel stands on a globe as he untangles the man from a net and floats above exquisite drapery. 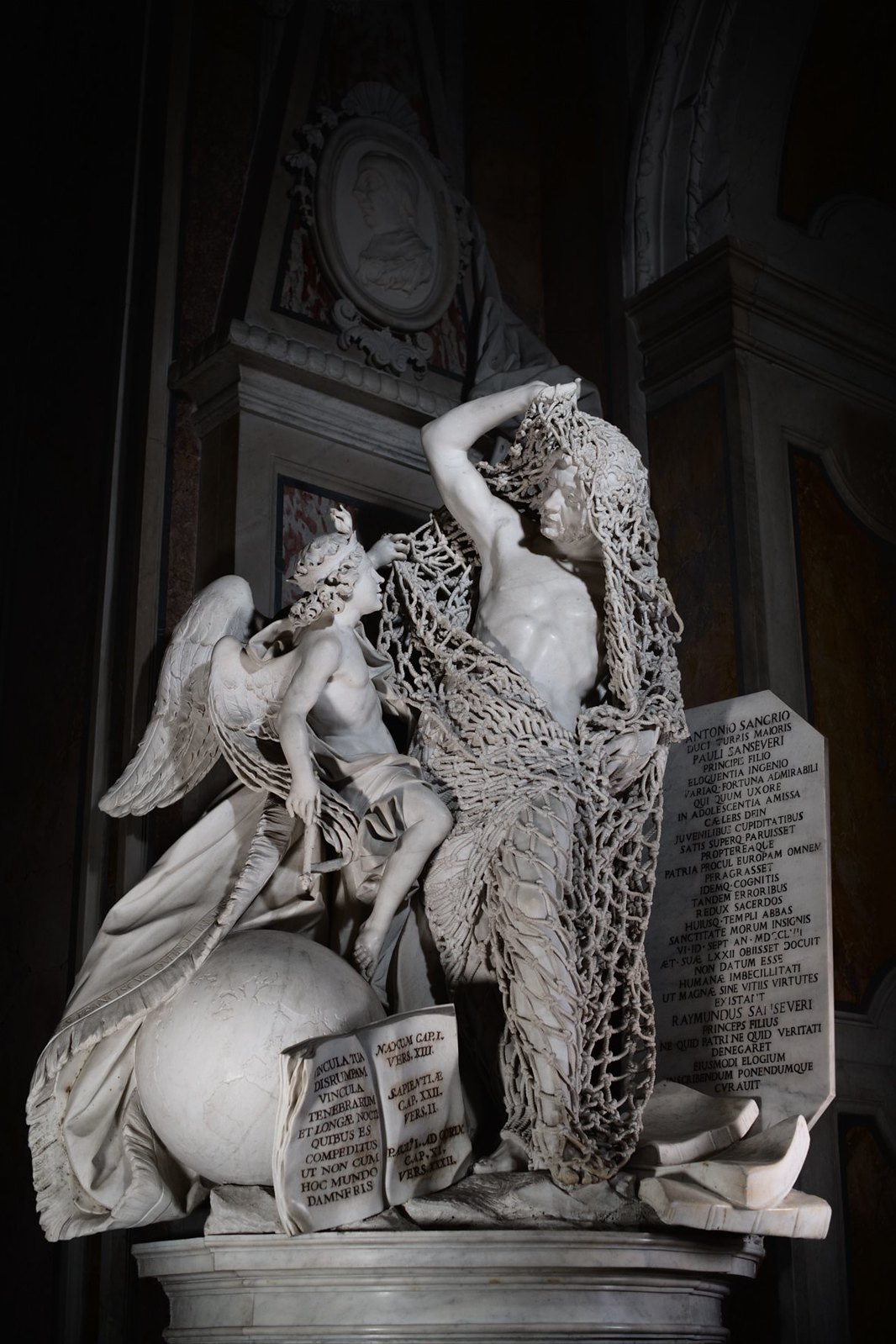 According to the Museo Capella Sansevero (“Sansevero Chapel Museum”) the net symbolizes sin. As the angel sets the man free, he rids him of his wrongdoings and introduces him to the Bible, which rests at his feet. In order to emphasize the idea of liberation, Queirolo adorned the open pages of the book with a Latin passage that reads: “I will break thy chain, the chain of the darkness and long night of which thou art a slave so that thou might not be condemned with this world.”

In addition to religious undertones, the sculpture incorporates secular symbols. For example, the flame on the angel's head represents human intellect, while the globe signifies worldly passions. These elements coincide with Raimondo’s dedication to his father, which explores the idea of “human fragility, which cannot know great virtues without vice.”

According to the museum, the sculpture also appears to denote aspects of freemasonry—a fraternal organization. The Bible, for example, serves a dual purpose, as an open book is one of the three “great lights” of Masonry. Similarly, the concept of light and dark—explored by the aforementioned biblical passage—”appears to be a clear reference to Masonic initiation, where those being initiated would enter wearing a ritual blindfold to open their eyes to the new light of the Truth.”

While its symbolism is compelling, it is The Release from Deception‘s sculptural details—namely, its exquisitely carved net—that has captivated viewers for centuries. Though, at first glance, this structure appears to be composed of intertwined rope, a closer look reveals that the open-mesh material is made entirely from a single block of marble.

A post shared by Museo Cappella Sansevero (@museocappellasansevero) on Jul 23, 2018 at 6:37am PDT

It reportedly took Queirolo seven years to fabricate this marble net, which he crafted without a workshop, apprentice, or other form of external assistance. The Sansevero Chapel Museum notes that this is because even the most specialized sculptors “refused to touch the delicate net in case it broke into pieces in their hands.”

Though laborious, Queirolo's determination undoubtedly paid off. Thanks to its marble netting, The Release from Deception has garnered the artist praise over the last 250 years. Giangiuseppe Origlia, an acclaimed Italian historian, called the piece “the last and most trying test to which sculpture in marble can aspire” in 1754, while 20th-century novelist Matilde Serao poetically described it as “a singular closure of life, a singular term for all sublimities, all passions, all loves.” She concludes: “Release from deception—and nothing more.”

Queirolo completed The Release from Deception in 1754. It was commissioned by Raimondo di Sangro, an Italian nobleman, and was intended to adorn the recently reconstructed Sansevero Chapel in Naples. 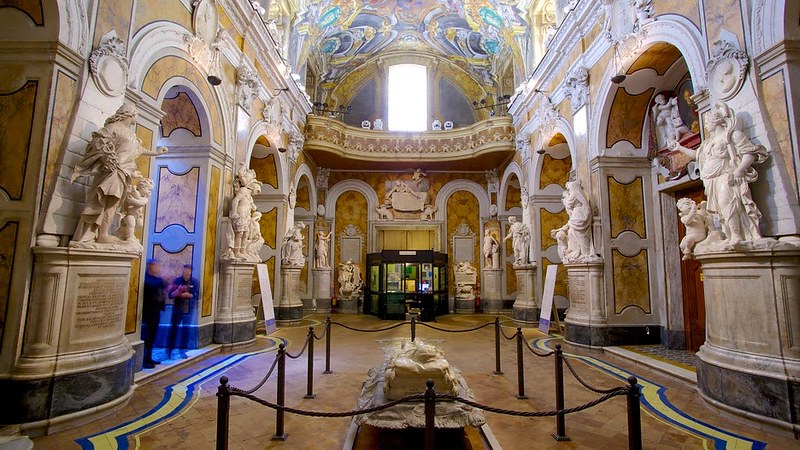 Built by John Francesco di Sangro in the late 16th century, the chapel became a family burial site in 1613. To memorialize those laid to rest on site, living family members would commission contemporary sculptors to design tributes to the dead. The Release from Deception was created to honor Raimondo's father: Antonio di Sangro, the Duke of Torremaggiore.

Other Masterpieces in the Sansevero Chapel

Believe it or not, The Release from Deception is not the only highlight of the Sansevero Chapel. Within its walls are 30 other works of art, including two prominent pieces: The Veiled Christ (1753) by Giuseppe Sanmartino and The Veiled Truth (1750) by Antonio Corradini.

Like The Release from Deception, these pieces purposely feature details that prove the sculptors' prowess. In these cases, each artist opted to include a veil, a motif that ambitious artists have employed since ancient times—and, like the delicate netting of The Release from Deception, will undoubtedly inspire visitors to the Sansevero Chapel Museum for years to come. 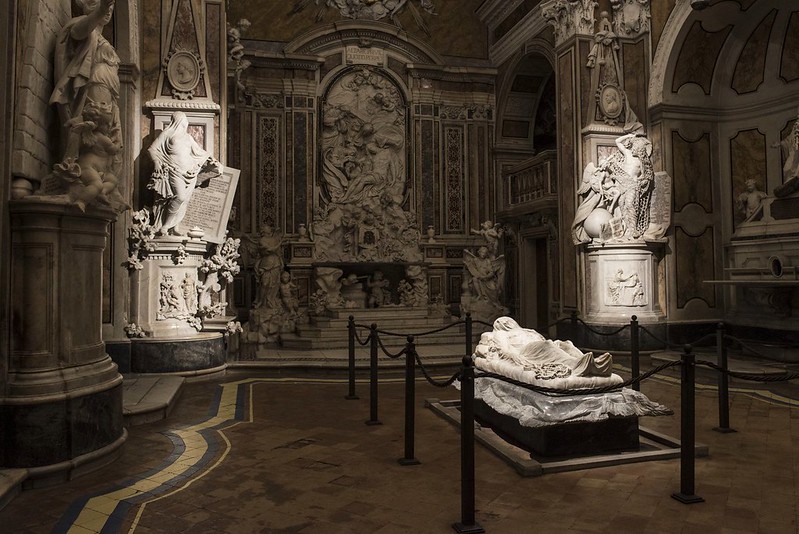 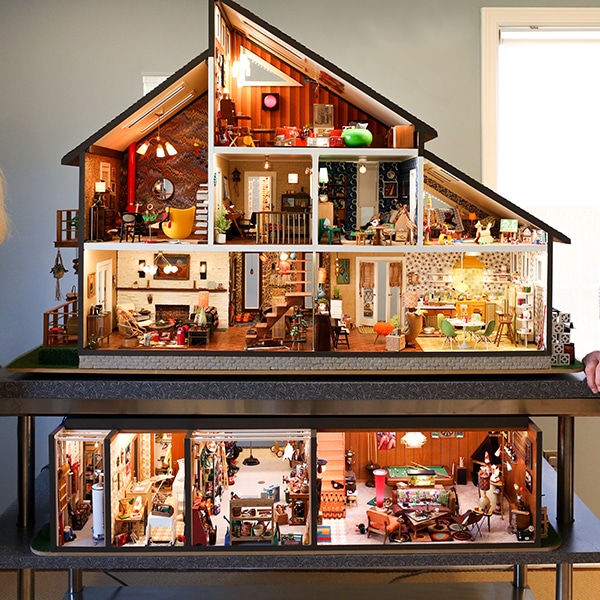 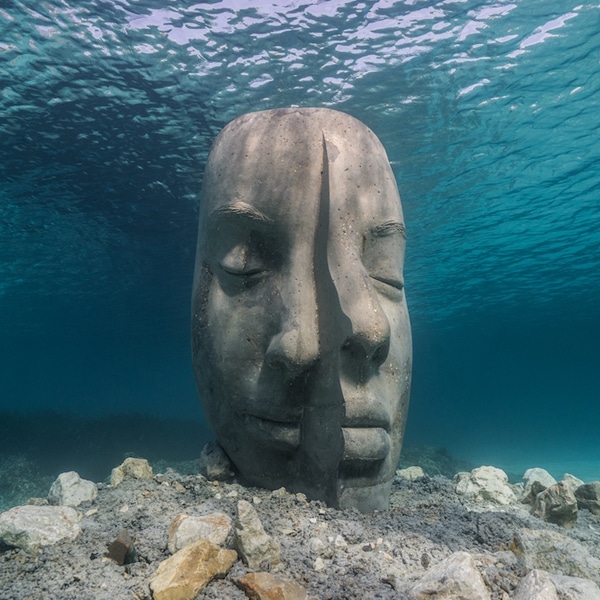 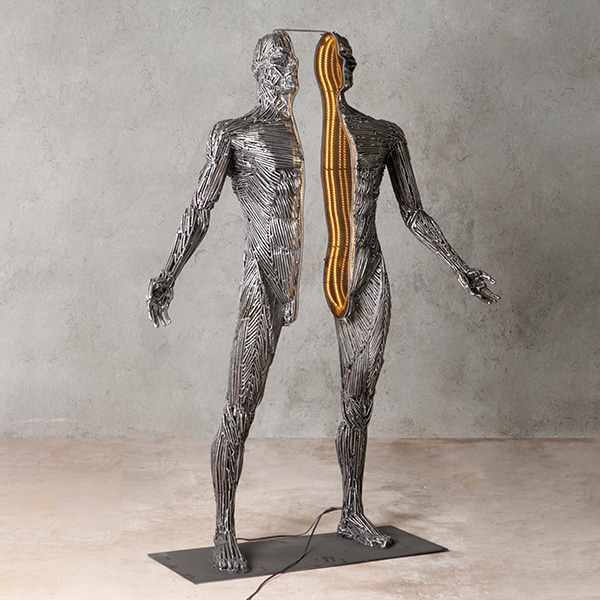 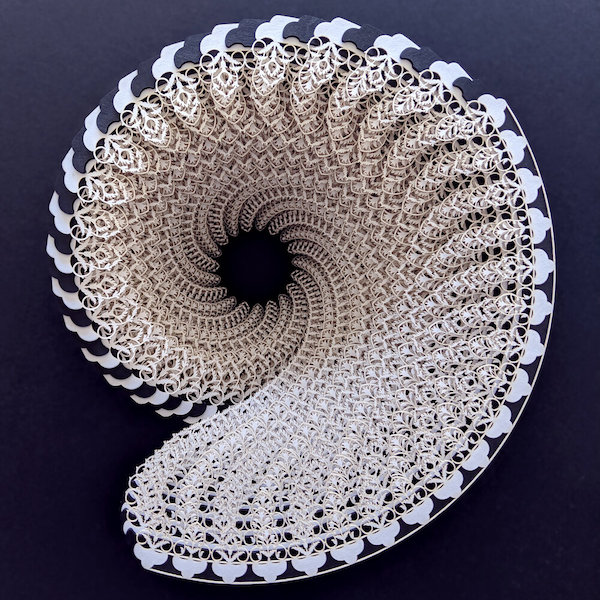 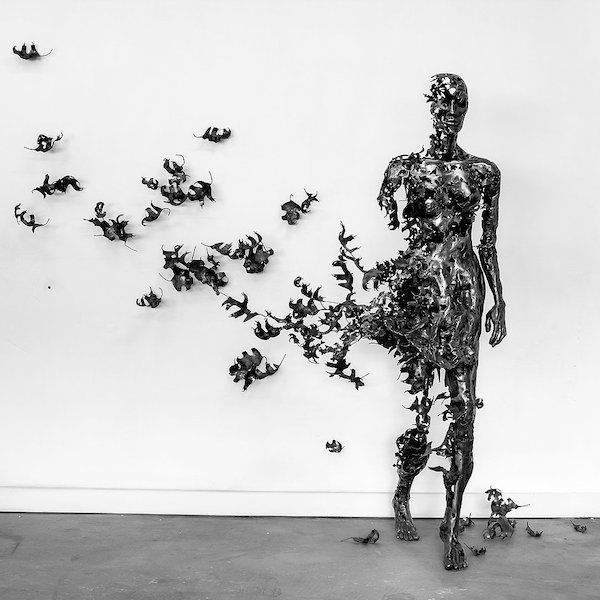 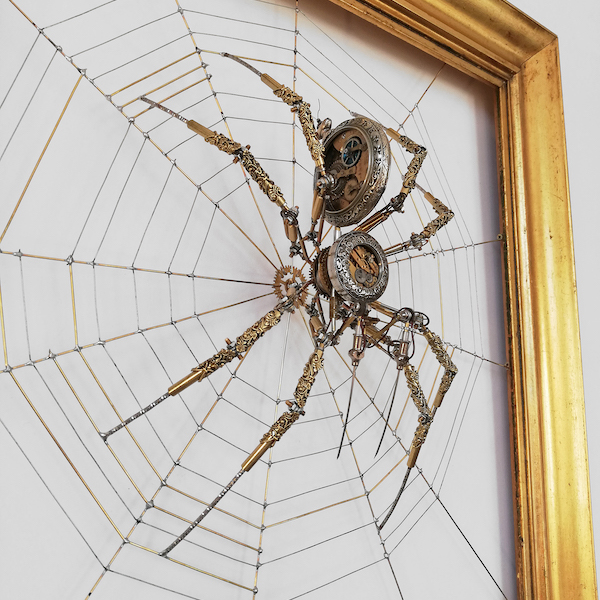 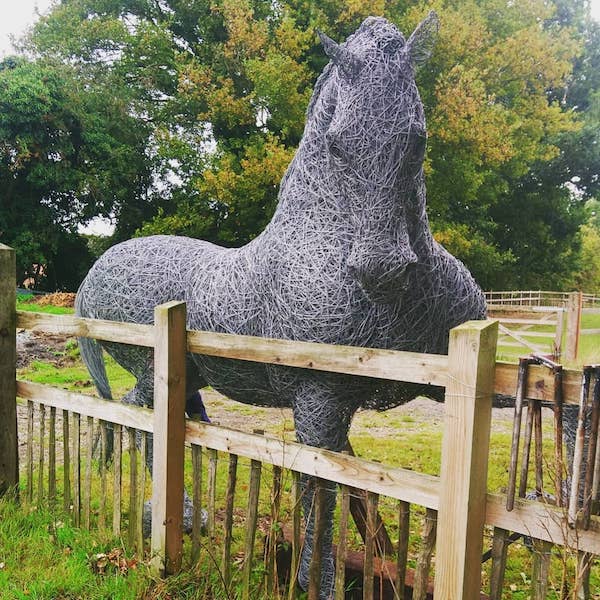