Animation Details the History of Cats, From Wild Hunters to “Sofa Sidekicks” 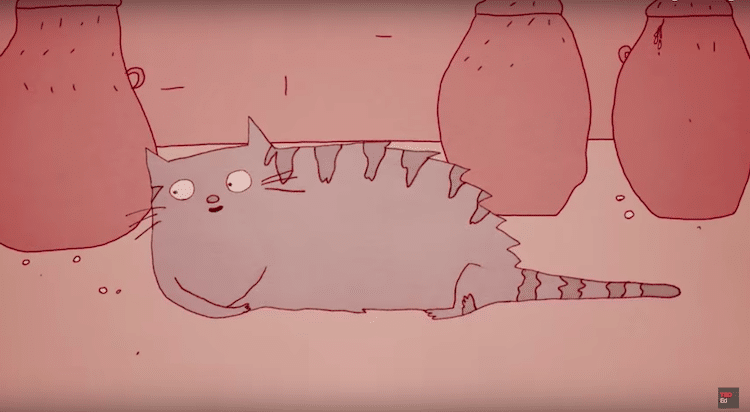 Cats have been part of human society for nearly 10,000 years, but they haven’t always been the cuddle companions they are today. In an animated Ted-Ed lesson, called The history of the world according to cats, Research Director Eva-Maria Geigl reveals how these once fierce predators became our “sofa sidekicks.”

The animation opens with a quote from Terry Pratchett—“In ancient times cats were worshipped as gods; they have not forgotten this.” Most cat-lovers would agree that our feline friends’ affection must be earned, and if you dare pet them the wrong way, you’ll probably get a bite or a scratch. Despite this, we love our cats unconditionally and accept them into our homes.

The animation details how, between 7000 BCE and c. 1700 BCE, cats were first only tolerated by Neolithic farmers who benefitted from their hunting skills. Cats would have been given shelter and food, as long as they kept pesky vermin away from crops. These wildcats—found in North Africa and South-West Asia—were called Felis silvestris lybica and were fast, fierce, and remarkably similar to today’s domestic cats. The video explains, “Unlike dogs, who have undergone centuries of selective breeding, modern-day cats are genetically very similar to ancient cats.”

Cats soon became essential sailing companions due to their natural instinct to rid ships from rats and snakes. The globetrotting cats soon found themselves in areas all over the world, where they learned to tolerate humans and even become tame. In Egypt, they were so important to the culture, that some cats were even mummified and kept in tombs alongside their deceased owners. Today, most house cats are descendants of these Egyptian felines, so it’s no wonder they have a bit of a god complex.

Discover the history of cats in the video below.

All images via TED-Ed.

50 Intimate Portraits of Famous Artists and Their Pet Cats