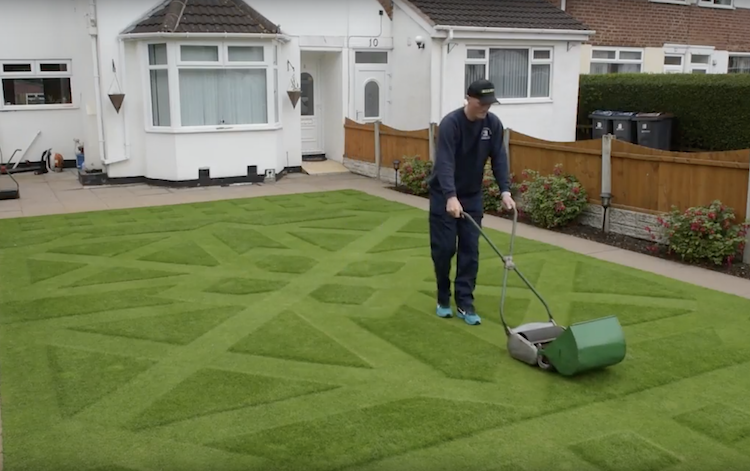 Birmingham-based greenskeeper Keith Smith is responsible for maintaining the grass at Edgbaston Golf Club. Even when he's not on the putting green, however, Smith doesn't stray too far from his day job. Known as a “garden wizard,” he has cultivated an amazing work of grass art in his own front yard.

Smith was able to transform his ordinary lawn into an ornate masterpiece using two trusty $40 antique push-mowers. Following a design demarcated by string and chalk, he skillfully cut the grass into a geometric pattern composed of crisp lines and symmetrical angles. To get it just right, he trimmed his lawn three times a day, culminating in 21 hours per week spent on the project.

While he humbly describes his lawn art as a “hobby,” it has brought Smith a lot of attention—and not just from his next-door neighbors. His intricate design has earned him first place in 2018's Allett Mowers Creative Lawn Stripes Competition, a contest dedicated to finding Britain's best lawn. This year, the competition was held during a particularly challenging heat wave, making Smith's win even more fruitful. “It’s an outstanding feat to win it,” he says. “I’m over the moon. It was my labor of love throughout the summer.”

So what's next for the garden wizard? Following his sown success, Smith hopes to help judge the competition next year.

And now see the “garden wizard” in action!

Awesome! Looking forward to seeing it in the flesh tomorrow @krs24976 pic.twitter.com/sUoG101JrB

Mini Trucks in Japan Are Being Transformed Into Enchanting Tiny Gardens