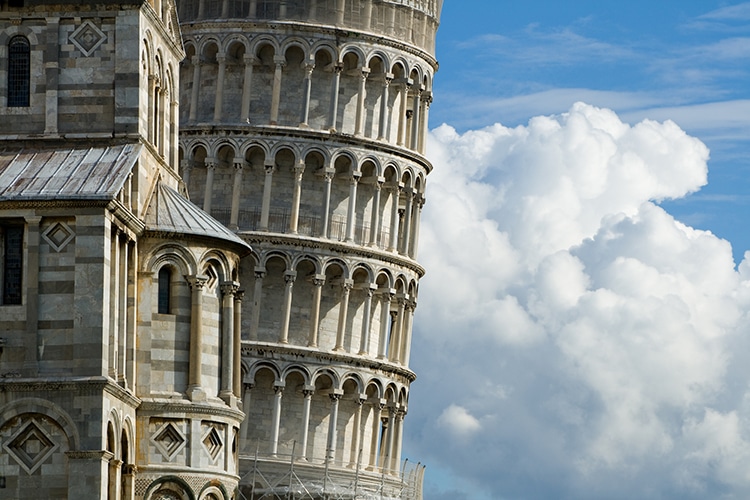 The Leaning Tower of Pisa tilts at about a four-degree angle. (Photo: ANTARTIS/DepositPhotos)

The Leaning Tower of Pisa has long fascinated visitors from around the world. Tourists arrive in droves to take photos creating the optical illusion of supporting the tilted building. The tower has even been immortalized in more dignified fashions by the likes of René Magritte.

So, what is the history behind this symbol of Italy? Discover over 800 years of Pisa history with these fascinating facts.

Read on for some fascinating facts about the medieval Leaning Tower of Pisa. 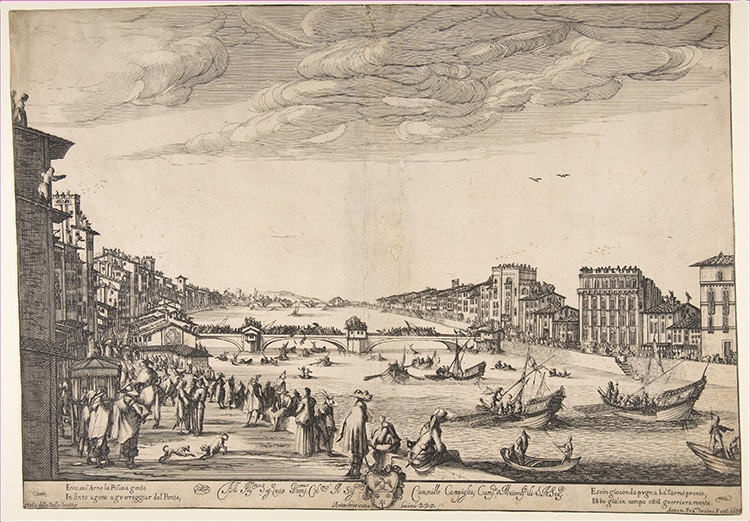 The Leaning Tower of Pisa is a bell tower, built to ring out the rituals of medieval Catholicism. With eight colonnaded stories containing 207 marble columns, the structure stands 56.67 meters (185.9 feet) at its highest point and contains 251 steps leading to the top through via spiraling staircases. While any building project of this magnitude takes time, repeated wars interrupted the tower's construction. Over its construction, the tower passed through multiple generations of architects.

The tower is part of the Campo dei Miracoli, a cathedral complex. 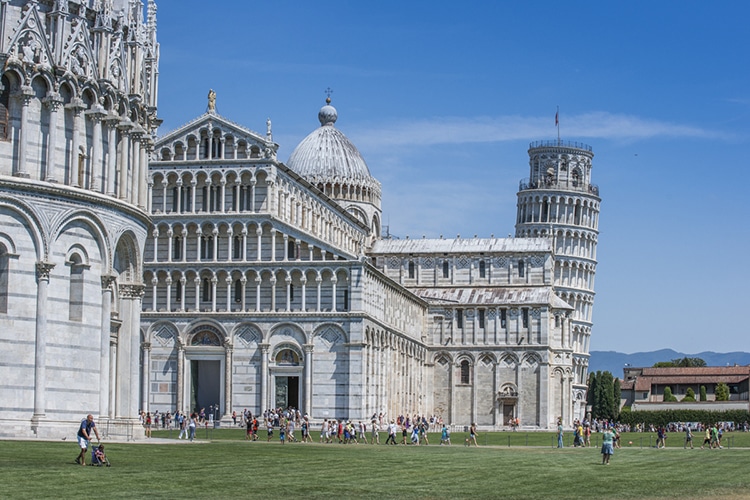 In medieval times, unified Italy did not exist; Pisa was a city-state vying for power with its neighbors. After a successful military expedition, Pisa decided to build a magnificent cathedral known as the Duomo di Pisa. The complex of buildings was constructed in Romanesque marble and contains a domed baptistery and a cloistered cemetery, in addition to the cathedral. The campanile (bell tower) has since become the most famous building of the complex for its dramatic lean.

It's been leaning for over 800 years. 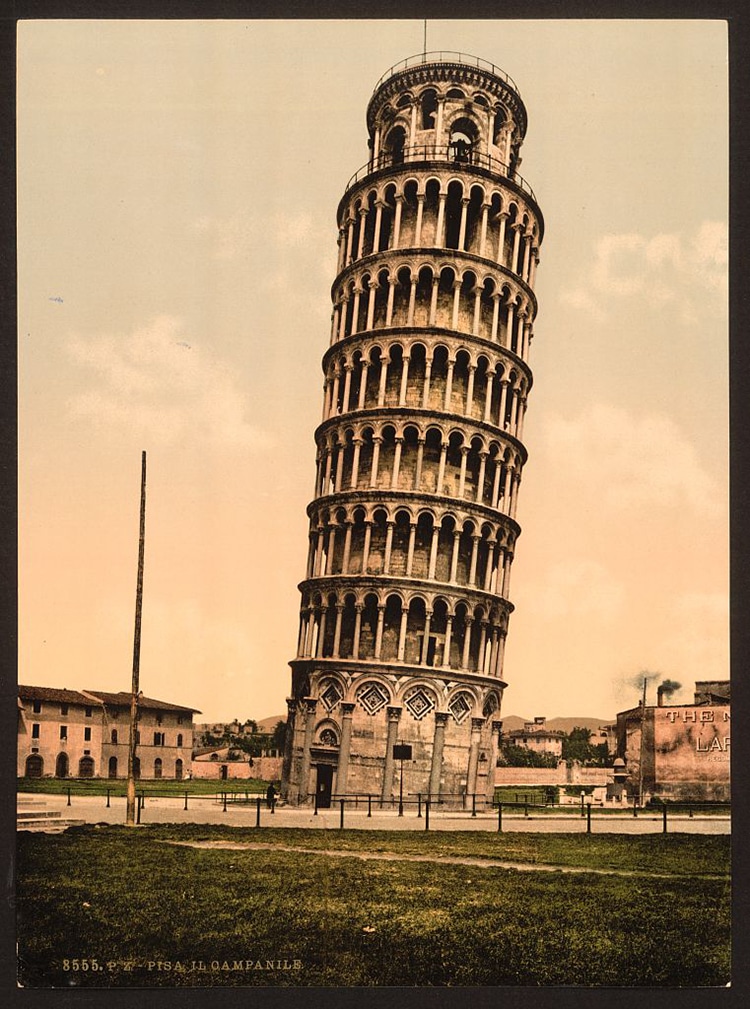 The Leaning Tower of Pisa, circa 1890-1900. (Photo: Library of Congress Prints and Photographs Division)

Many people assume that the Leaning Tower of Pisa leans because of age. However, the tower actually began to lean as early as 1178—when only three stories had been built. Unfortunately, the choice of location had something to do with it. It was anchored upon shifting clay and sandy soil which was not ideal for a 14-ton structure.

The architects of the tower tried to compensate by adding stories shorter on one side (to correct the lean), but this did not work. According to the Tower of Pisa website, “Over the next 800 years, it became clear the 55-meter tower wasn’t just learning but was actually falling at a rate of one to two millimeters per year.”

Galileo used the tower to test his physics theories. 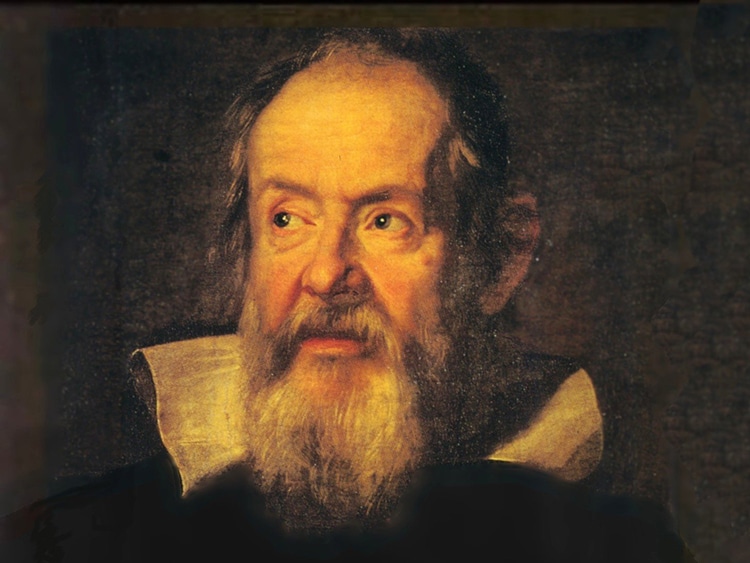 Legend has it that scientist Galileo Galilei, a Pisa-local, experimented with gravity from atop the tower. He dropped two equal-sized cannonballs of different masses to clock their impact. Galilei was investigating the old wisdom that heavier objects fall faster, but this we now know to be untrue when other factors are equal.

The tower has survived at least four earthquakes.

For a leaning tower, one might assume a large earthquake would be fatal. But surprisingly, the tower is still standing after at least four significant quakes. In 2018, a team of engineers sought to understand why the tower never fell. Their published findings claim the sinking structure has dynamic soil-structure interaction. This means that the soft soil below the tower actually prevents the structure from reverberating as much as it might if built on more solid ground. George Mylonakis, the paper's co-author, commented, “Ironically, the very same soil that caused the leaning instability and brought the Tower to the verge of collapse, can be credited for helping it survive these seismic events.”

It has seven bells. 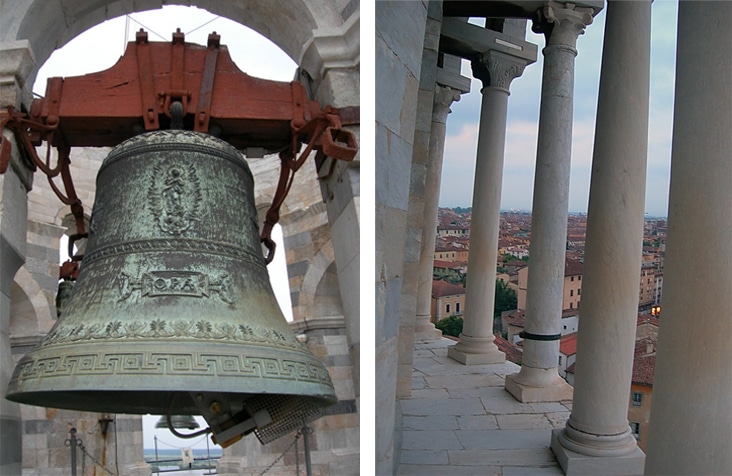 As the cathedral's bell tower, the structure is still fulfilling its ancient function. The seven bells are perched at the top of the tower. The oldest was cast in 1262, and the most recent was recast in 2004. Each bell is named. They include Il Crocifisso (the Crucifix), L'Assunta (The Assumption), and La Terza (The Third).

The tower was stabilized and the lean was partially corrected in the 1990s. 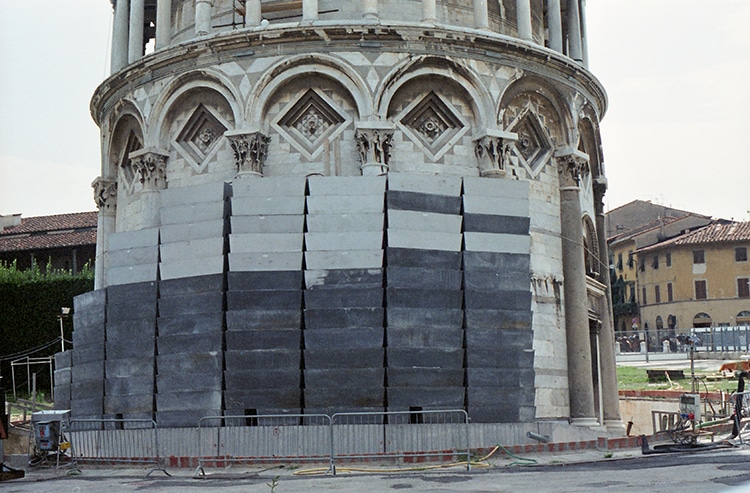 The Leaning Tower of Pisa can be said to be falling (very slowly) with style. Over the years, significant efforts have been made to ensure the tower does not completely collapse. From 1990 to 2001, the tower was closed to visitors while precise stabilization efforts were underway. Seventy metric tons of dirt were removed from underneath the taller side of the tower. When all was said and done, it was straightened by 17.7 inches. While that doesn't sound like a lot, this was the equivalent of taking the tower back to the 1830s. The tower is not expected to require further stabilization for another couple hundred years.

There have been other “leaning towers” like that of Pisa. 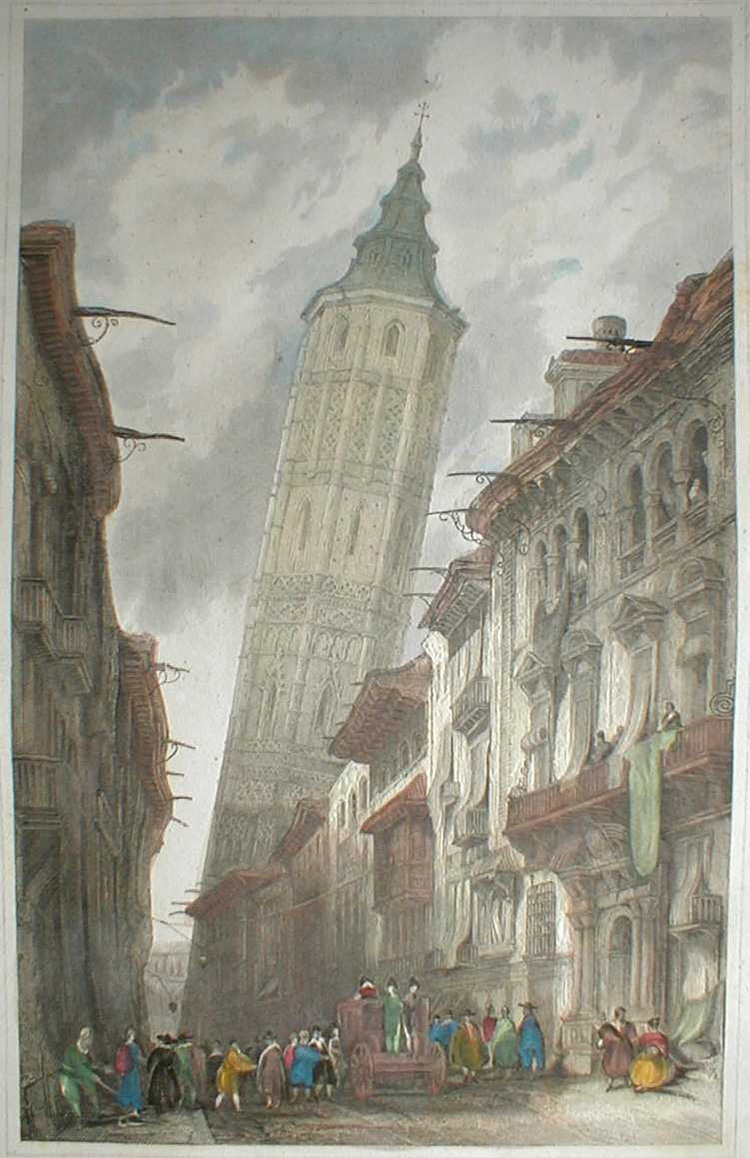 Pisa can boast the most famous leaning tower, but off-kilter structures have abounded throughout history. Leaning slightly more than that of Pisa, the medieval Leaning Tower of Suurhusen is still standing in Germany. The Leaning Tower of Zaragoza, however, is no longer around; the 16th-century Spanish tower was destroyed in the late 19th century before it could collapse. The minaret of the Great Mosque of al-Nuri in Mosul, Iraq, was also leaning before it was destroyed in 2017 by ISIL. In India, one can still view the Leaning Temple of Huma in the state of Odisha.

A TikTok trend had people pretending it had fallen down.

As much as experts agree that the tower is stable, that did not stop TikTokkers from trying to convince everyone otherwise. Millions of users filmed themselves reacting to the fake news that the tower had fallen.

The tower can be visited (and climbed) near the medieval town of Pisa, Italy. 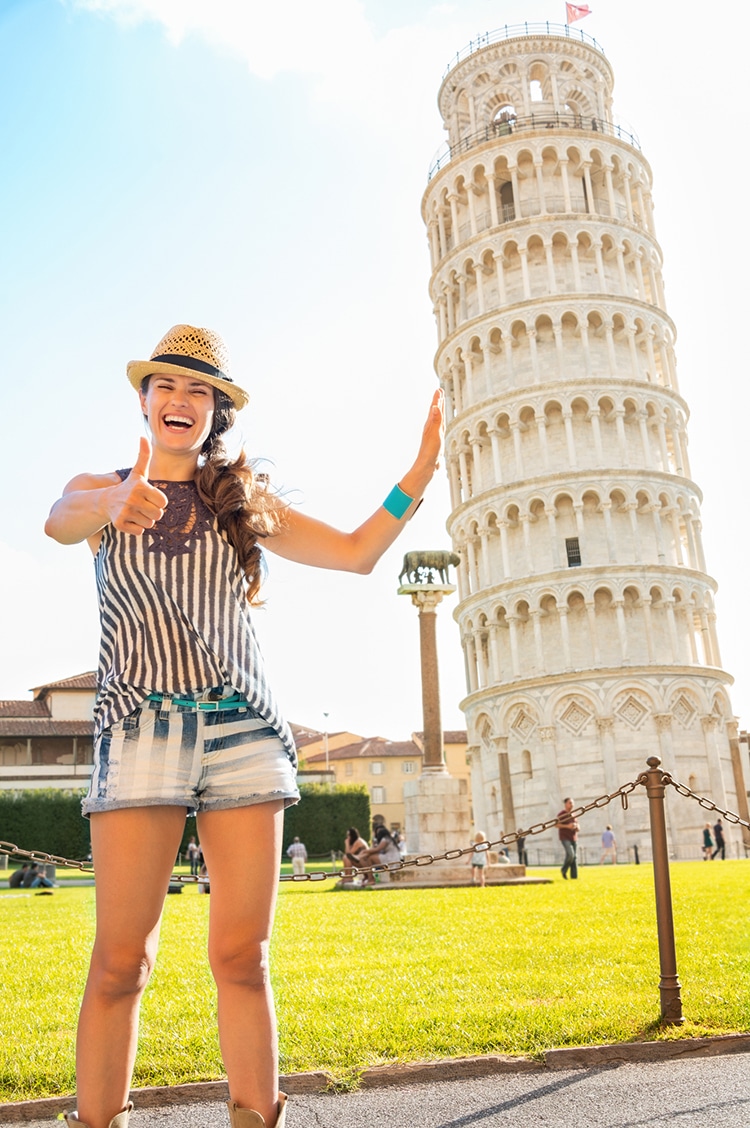 The Leaning Tower of Pisa is open to visitors once more. Make sure to check out this incredible historical site next time you are in Italy. For even more history, nearby Pisa also boasts the medieval University of Pisa and countless museums.