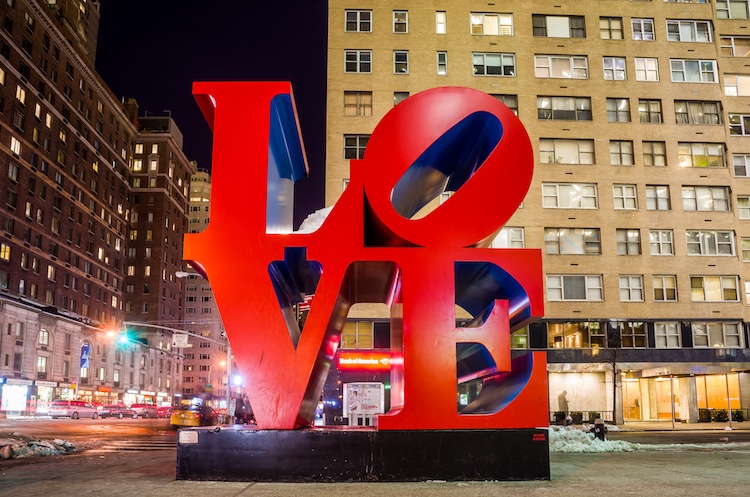 The LOVE series is a collection of sculptures by Robert Indiana, an American artist. While the first LOVE sculpture was crafted in 1970, the origins of its design can be traced back to six years earlier, when the Museum of Modern Art in New York City commissioned Indiana to create a Christmas card. 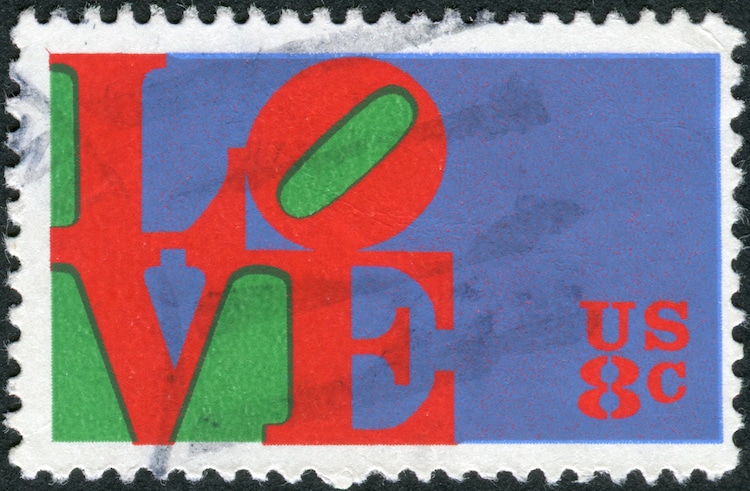 For this festive print, Indiana produced the familiar design we know today: the characters L, O, V, and E rendered in a serif typeface and stacked atop one another. The bold red letters stand out against a backdrop that alternates between bright blue and green. When paired with the curiously crooked O, this color palette appears to imply playfulness, making the print accessible to a wide audience—and, subsequently, a perfect prototype for a work of public art. 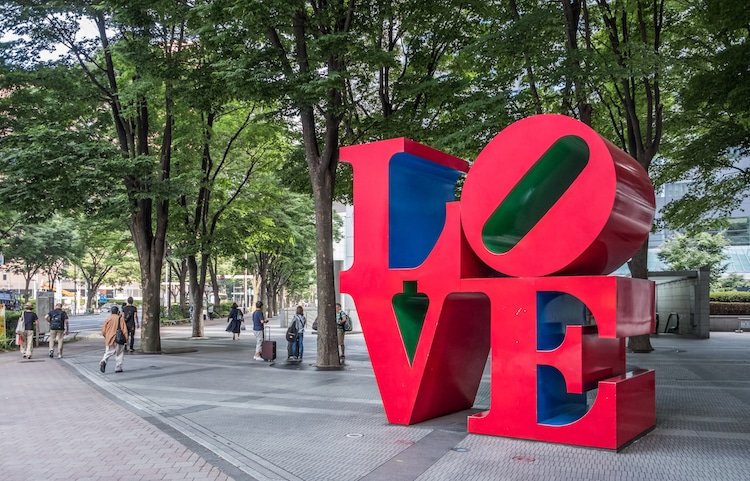 While many people assume that LOVE was inspired by romance, it was actually shaped by Indiana's religious upbringing. Given its Christmas card origins, however, its relationship with Christianity is not entirely surprising.

Growing up in New Castle, Indiana, Robert Indiana (born Robert Clark) was raised according to the beliefs of the Church of Christ, Scientist. This Christian denomination was founded by Mary Baker Eddy, a self-described “spiritual pioneer,” in 1879. Though the church gained traction in the early 20th century, it would eventually fall out of fashion during the “free love” phase of the 1960s. This resulted in the closure of many of its churches across the country.

In 1964, Indiana was recruited by art collector Larry Aldrich to help turn one of these spaces into a contemporary art gallery. Though seemingly inconsequential, this project would play a pivotal role in Indiana's career, planting the seed for his LOVE print and subsequent sculptures and paintings.

“The LOVE paintings sprang like a crop from that seed planted at your museum, Larry,” he explained in a letter, “the painting you commissioned, Love is God, which burst into mind when I learned that you were converting an old Christian Science Church in Ridgefield . . . for I, as a child, was raised as a Christian Scientist, and the word LOVE was indelibly imprinted in the mind, for there is that slightly different phrase, ‘God is Love,' on every front wall of every one of Mary Baker Eddy’s houses throughout the world.” 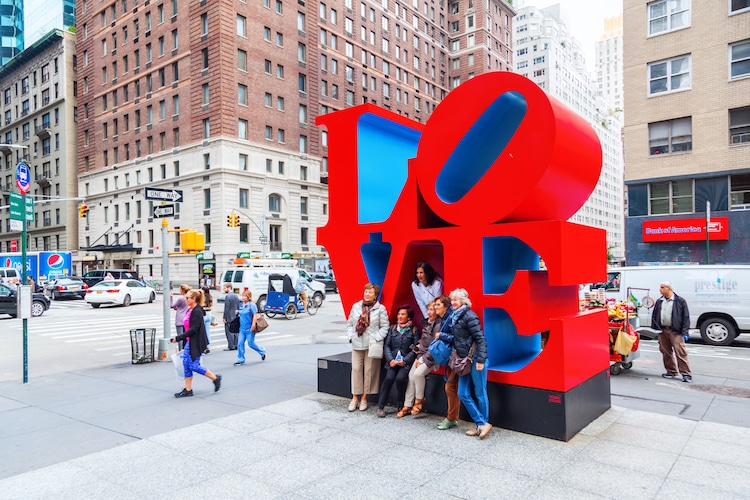 The original LOVE sculpture—now housed by the Indianapolis Museum of Art—saw immediate success when it made its debut in 1970.

Over the course of several decades, Indiana would go on to create over 50 editions of the sculpture for sites around the world, from New York City and Philadelphia to Singapore and Taipei. While these pieces vary in scale and color palette, they are all rendered in Indiana's signature serifed style and always incorporate a tilted character—even when written in another language or spelling out a different word, like HOPE.

Given the vast number of sculptures that exist around the world, one might expect Indiana to have been enamored with the design. However, that was not the case. In fact, over the course of his career, the artist began to resent the series, noting that he did not enjoy the mainstream fame that it brought him.

“It was a marvelous idea, but it was also a terrible mistake,” he told NPR in 2014. “It became too popular; it became too popular. And there are people who don't like popularity. It's much better to be exclusive and remote. That's why I'm on an island off the coast of Maine, you see.” 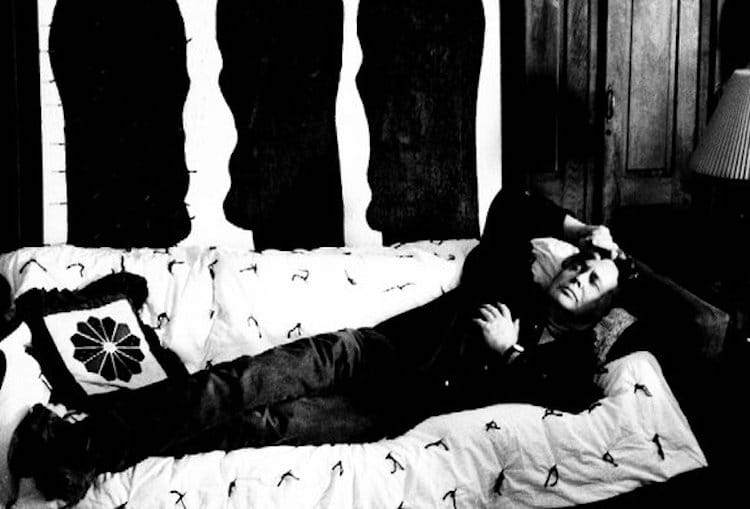 On top of overwhelming the reclusive artist, this popularity also proved to be detrimental to his career. “In some ways he was perhaps seen as the proverbial one-hit wonder because ‘LOVE’ was so immensely iconic and immensely huge in pop culture,” Dan Mills, the director at Bates College Museum of Art, explained. “For better or for worse, it overshadowed some of his other contributions.” 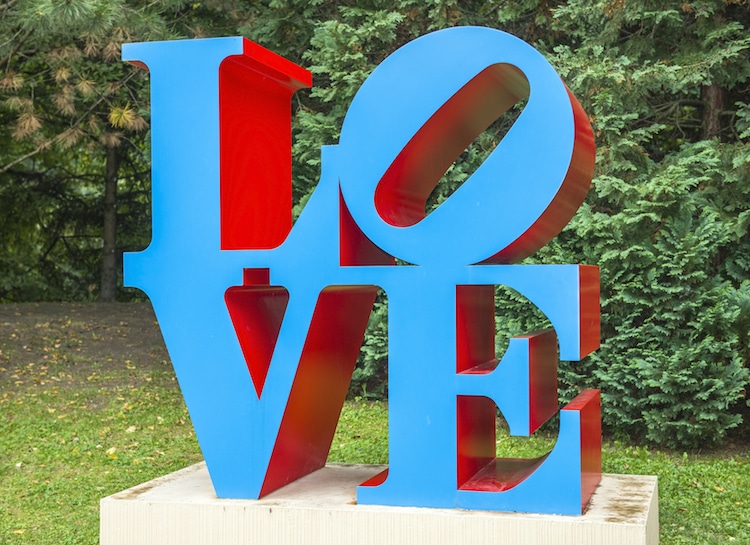 In order to shine a light on these lesser known works, the Whitney Museum staged Beyond Love in 2013. This major retrospective of his work sought to paint a bigger picture of the artist, focusing on how he harnessed the power of words to develop his signature style in his other sculptures.

In 2018, Robert Indiana died at the age of 89. While he was undoubtedly displeased with the legacy of LOVE, the Pop Art masterpiece continues to hold an important place in the history of art—and in the hearts of people all over the world.

Love "Love"? Share
Like My Modern Met on Facebook
Get Our Weekly Newsletter
Become a
My Modern Met Member
As a member, you'll join us in our effort to support the arts.
Become a Member
Explore member benefits
Love "Love"?