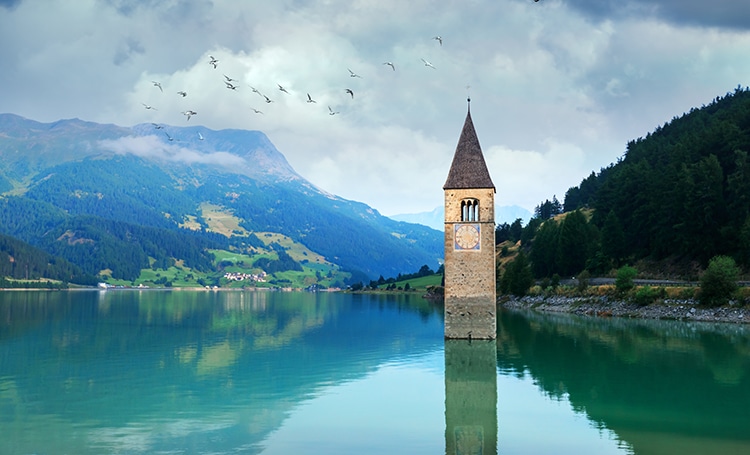 Underwater cities have long fascinated the masses, from tales of the mythical Atlantis to the submerged remains of ancient Alexandria. Under the right conditions, submerged worlds can reemerge after years of hiding beneath the surface. Recently manmade lakes in Spain and Tuscany, Italy have withdrawn (if temporarily) to expose fascinating ancient structures. Now, a medieval Italian village known as Curon has emerged from the waters of Lake Resia after 70 years beneath the beautiful waters of this lake close to the border of Italy, Austria, and Switzerland.

The town of Curon is in the South Tyrol region which was once part of the Austro-Hungarian Empire. In 1919 at the conclusion of the Great War, Italy took control of the region. Today, most residents of the area still speak German. Despite its medieval roots, the village of Curon was in the way of a modern plan to unite two smaller lakes on either side of the town. Under Benito Mussolini's government, construction began on a dam which would flood the town and merge the bodies of water. The 1,000 residents of the town had to relocate to make way for the new Lake Resia. In 1950, the dam was complete and the town flooded. Today, a nearby town—Curon Venosta—carries on the name of the lost village.

Since 1950, only the 14th-century bell tower has been visible, poking its spire above the water. This famous site has drawn tourists to the region for the picturesque photo ops and gorgeous surrounding natural landscapes of the Alps. However, like all infrastructure, time comes for repairs. Lake Resia has recently been partially drained to allow access to the dam to make repairs. Due to the lower water levels, the remains of historic Curon are visible for the first time since 2009 when other repairs were conducted. The stone remnants of the village show many buildings were destroyed before flooding.

The haunting remains have made international news and spread around social media, sparking renewed fascination in the area. In recent years, the concept of a lost city beneath the lake has even inspired books and an Italian Netflix horror show entitled Curon. From Atlantis to Curon, one thing is certain: underwater cities capture the imagination and captivate audiences everywhere.

The medieval Italian village of Curon has been submerged since 1950 and has finally reemerged as the lake it sits in is drained. 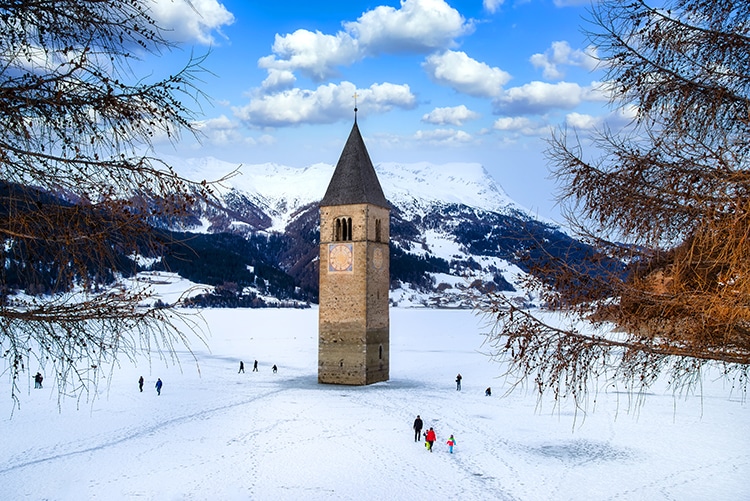 The tower in winter with the normal water level. (Photo: Stock Photos from SSKH-PICTURES/Shutterstock)

The town was flooded to create Lake Resia, and the only visible part of Curon was its bell tower.