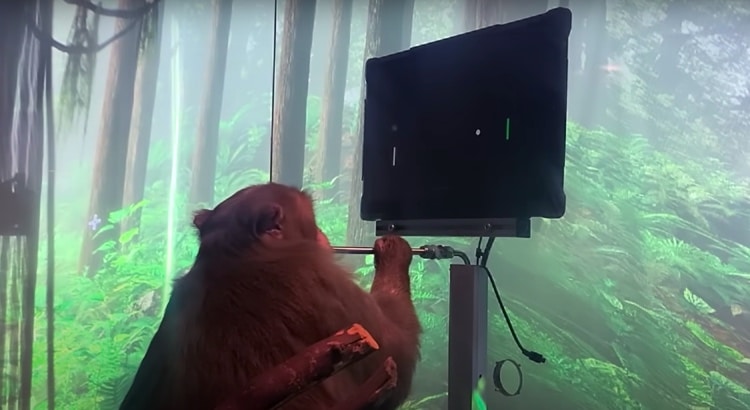 In 2019, when Elon Musk first mentioned that his startup Neuralink had created technology that allowed a monkey to play a computer game with its mind, some were skeptical. But a recent video released by the company shows that the technology they are developing is no joke. After having Neuralink's wireless brain-machine interface (BMI) embedded into his brain, a 9-year-old macaque monkey named Pager was able to play Pong using his mind.

How does it work? First, Pager had the device implanted into the hand and arm areas of the motor cortex. This is the part of the brain that is used to plan and execute movements. He was then taught how to play Pong using a joystick and banana rewards. During that phase, the 1,024-electrode device recorded Pager's brain activity and noted spikes in electrical impulses created by neurons. Eventually, the BMI was able to learn the brain patterns connected to different joystick movements.

Once the device had learned Pager's habits, the joystick was unplugged. So while Pager used the joystick, the actual movements on the screen were generated by his thoughts. Later, Pager didn't even need the joystick. Now he's learned that just thinking of where he wants the cursor to go will move it. It is an incredible feat that proves the power of Neuralink's technology. The hope is that their wireless BMI can be used to help those suffering from paralysis to regain some freedom. Though calibrating the decoder for humans is slightly more complicated than what was necessary for Pager, Neuralink is confident that they've cracked the code.

While BMI technology is not new—research started in the 1970s—Neuralink brings something different to the table. “The BMI systems used in previous studies have no more than a few hundred electrodes, with connectors that pass through the skin, requiring a technician or caregiver to ‘connect' the BMI,” they share. “Our mission is to build a safe and effective clinical BMI system that is wireless and fully implantable that users can operate by themselves and take anywhere they go; to scale up the number of electrodes for better robustness and higher information throughput; and to automate the implant surgery to make it as rapid and safe as possible.”

Neuralink's initial goal is to “give people with paralysis their digital freedom back: to communicate more easily via text, to follow their curiosity on the web, to express their creativity through photography and art, and, yes, to play video games.” Eventually, they want to help improve the quality of life for others suffering from neurological disorders and disabilities. They even remain hopeful that the technology may be able to stimulate nerves and muscles to allow people to regain movement.

If you are curious about Pager and his quality of life, Neuralink has published a video with its animal care specialists to talk about how the pigs and monkeys who help trial this technology are cared for. And watch below for Pager's full video demonstration to see how good he's gotten at Pong.

Watch this monkey play video games using his mind thanks to technology by Elon Musk's Neuralink.