Ocean Art attracts top underwater photographers from around the world. 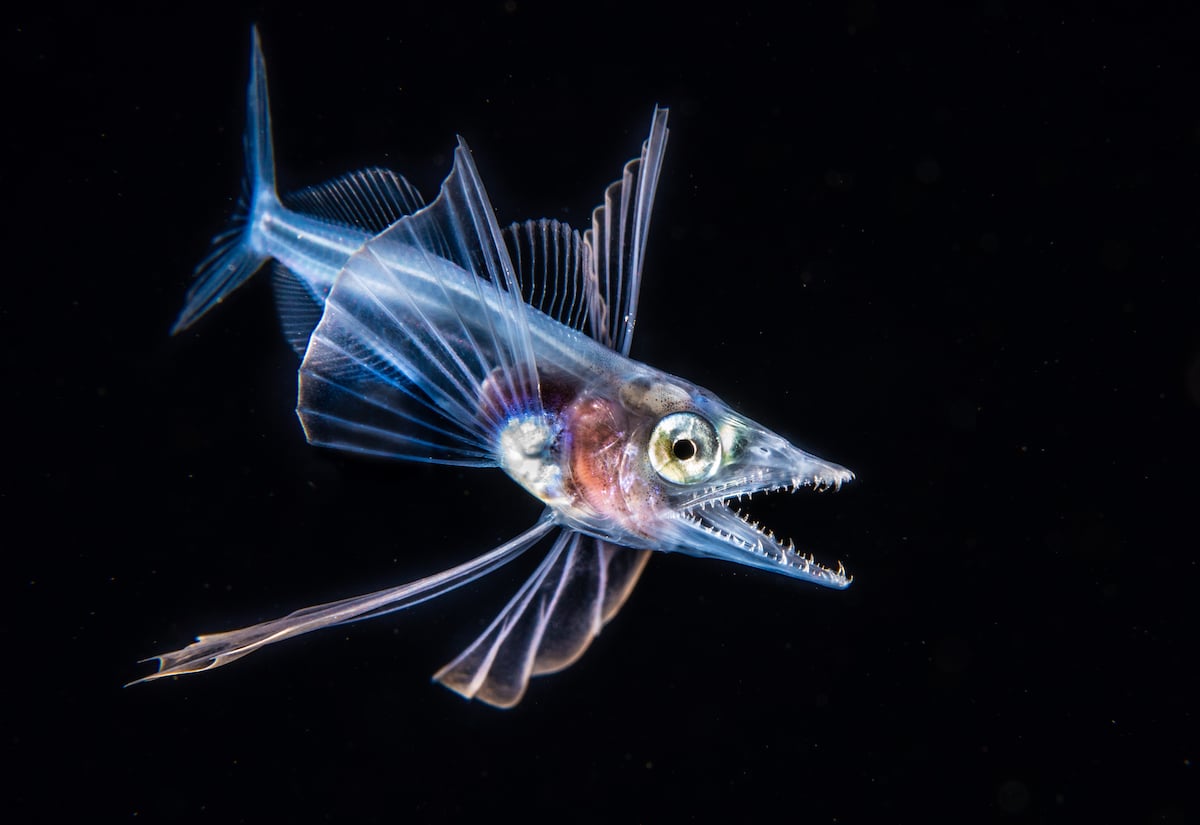 “Snaketooth Swallower” by Fabien Michenet
1st Place in Blackwater. Shot in Tahiti Island, French Polynesia.
“The observation of juvenile deep-sea fish is possible during blackwater drift dives offshore as some species begin their life in the epipelagic zone (between the surface and 200m).
Finding and photographing these juveniles is certainly one of the most fascinating aspects of these dives above the deep-sea bottom.
This individual is called a Snaketooth deepsea swallower (Champsodontidae -Kali macrodon). It lives its adult life posed on the deep sediment waiting for preys passing nearby. With a very large head and very developed pelvic and pectoral fins, it has a very different morphology from the adult.
As soon as they are disturbed, these fish could tend to let themselves sink to the deep. Before taking the first shot of this beautiful juvenile, I took care to reduce the intensity of my focus lights and properly orient the flashes so as not to overexpose the shiny eyes and properly illuminate the fins.” 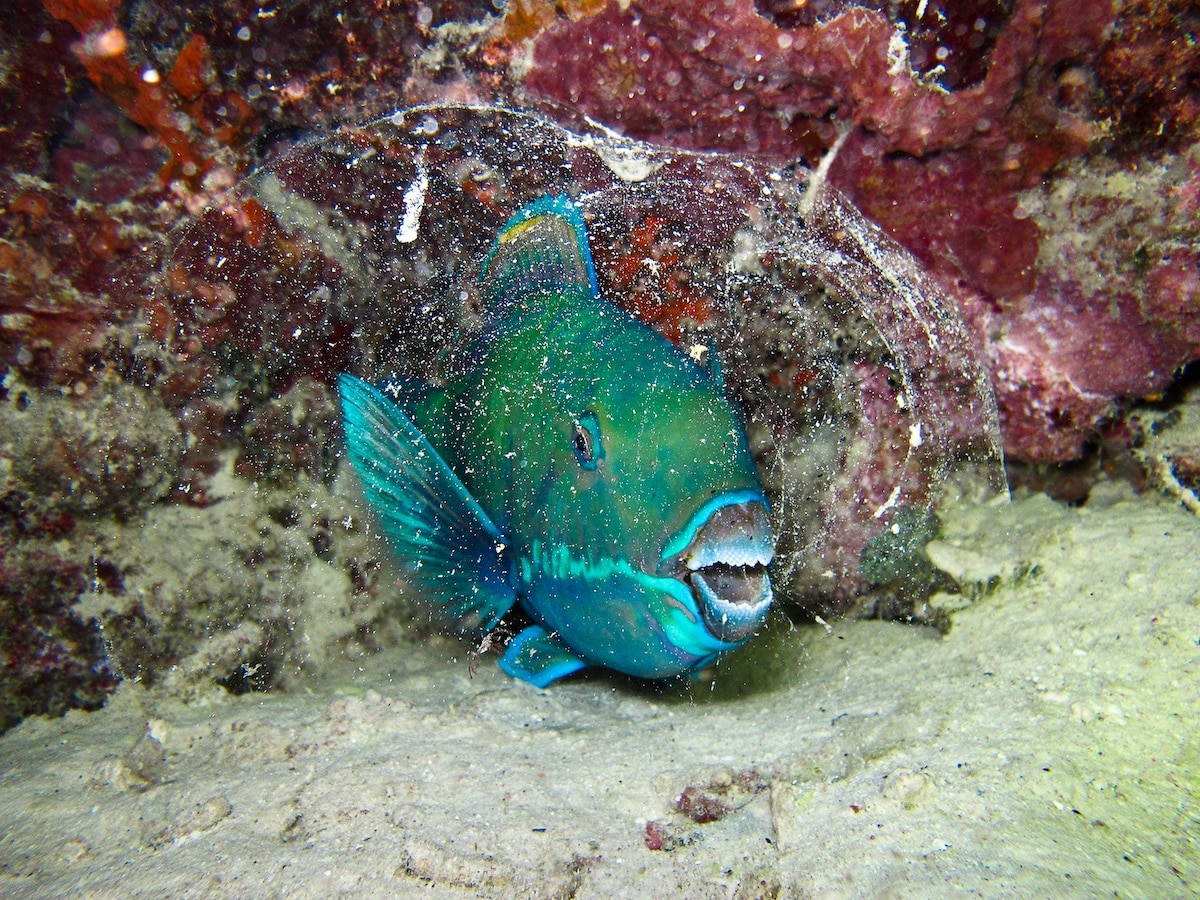 “Protective Cocoon of the Parrot Fish” by Fabien Martinazzo
2nd Place in Compact Behavior. Shot in Mactan, Philippines.
“This night dive in the Philippines allowed me to observe one of the best defense systems in the animal kingdom. Indeed, this magnificent parrotfish was secreting mucus through its mouth, creating a real protective envelope all around it. This mucus prevents its predators from feeling it and allows it to repair its wounds.”

“The Engine” by Tobias Friedrich
2nd Place Wide Angle. Shot in Red Sea, Egypt.
“Panoramic view of the engine room of the Chrisoula K. I placed six other lights behind the engines to give it more depth and atmosphere.” 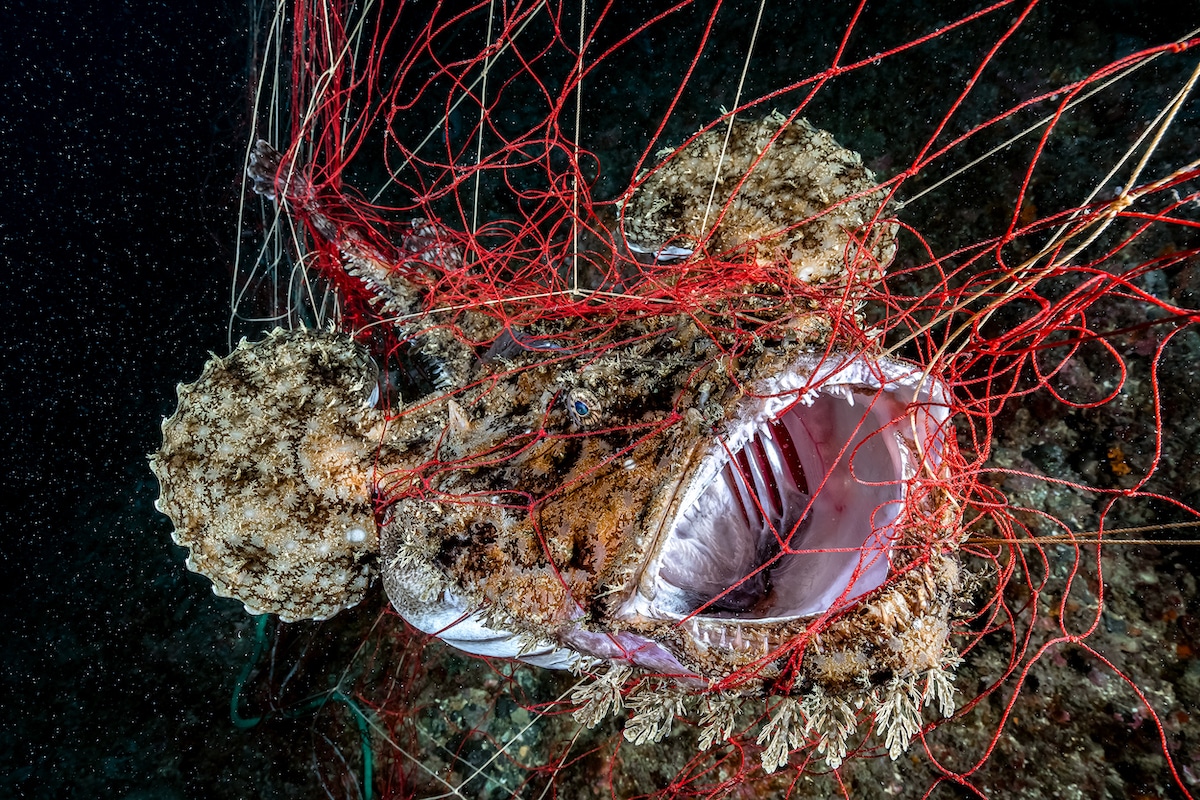 “Trapped” by Alessandro Grasso
2nd Place in Conservation. Shot in Punta Chiappa Camogli, Italy.
“I was diving in the protected marine area of Portofino, and I noticed this anglerfish trapped in the net. It was desperately trying to free himself. After making two shots I proceeded to free the beautiful specimen. It was not easy because the dense fishing net completely wrapped the fish.” 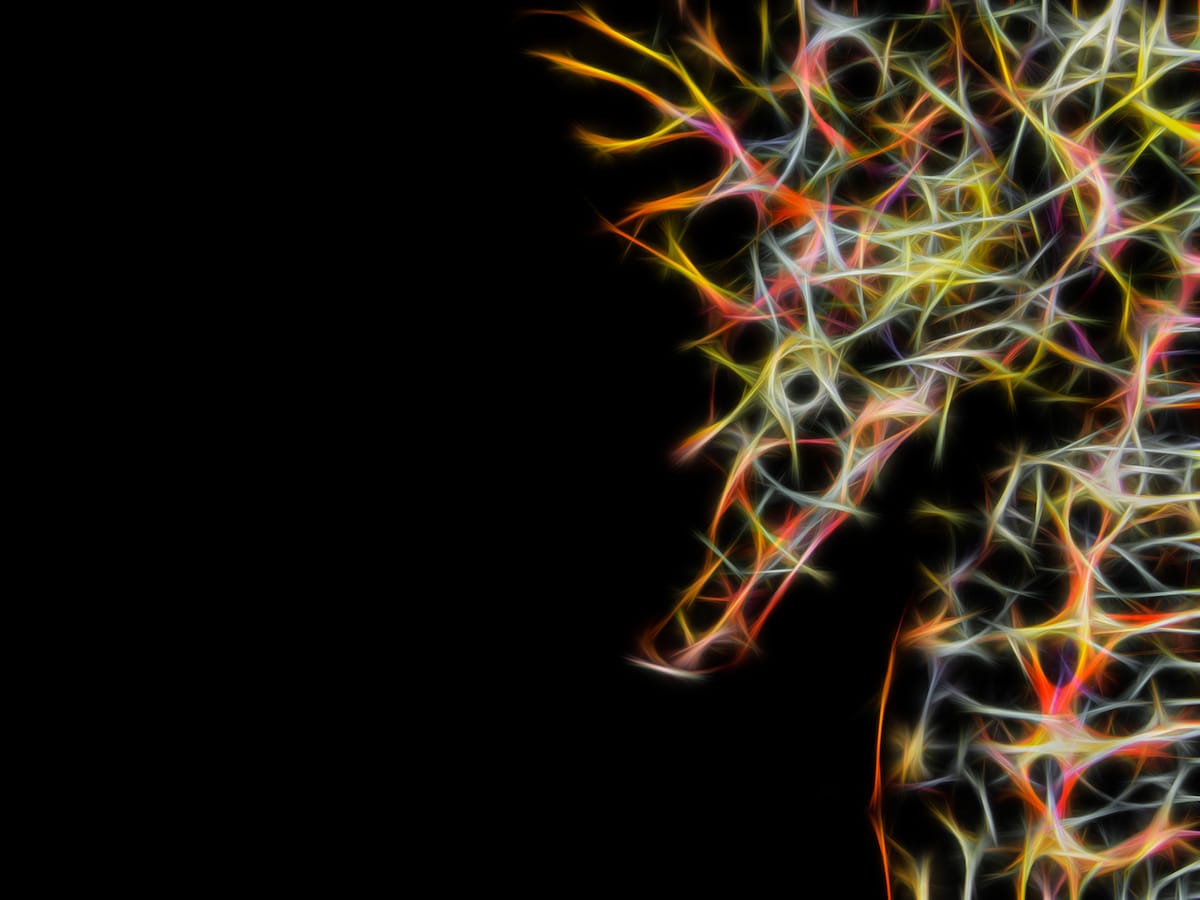 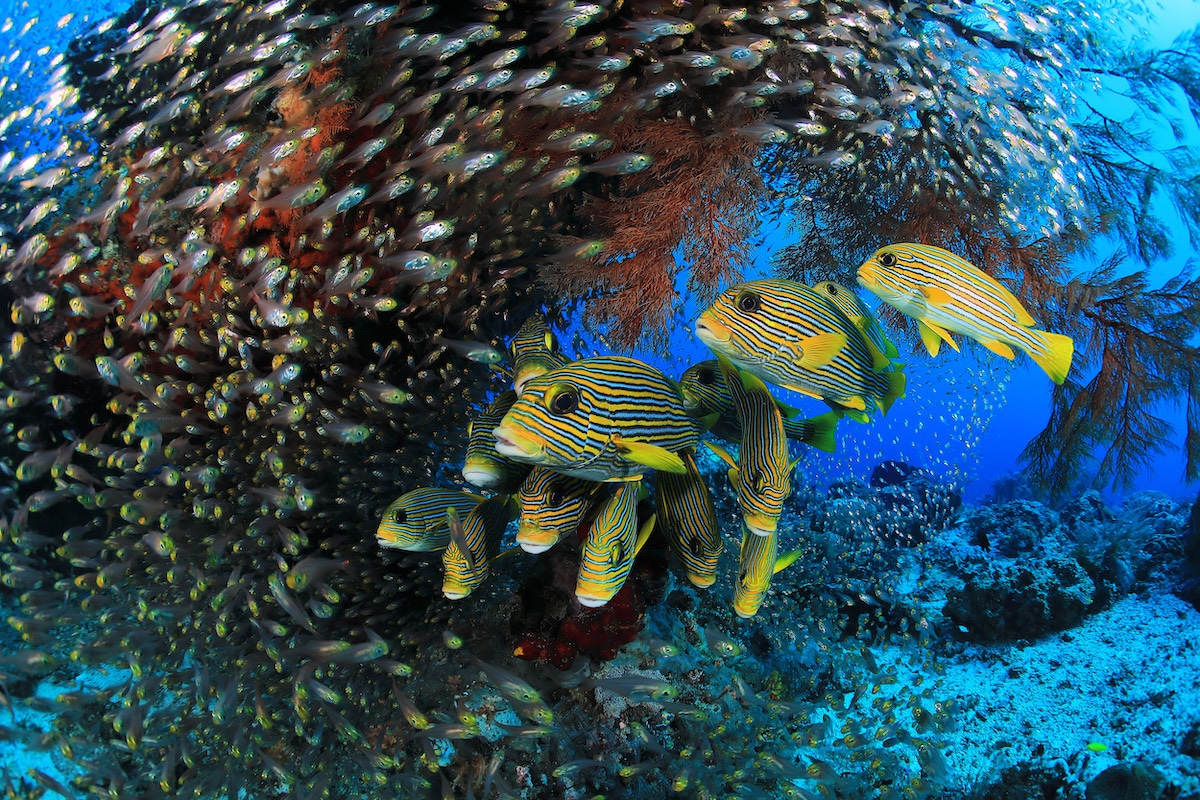 “Raja Ampat” by Eduardo Acevedo Fernandez
1st Place in Reefscapes. Shot in Raja Ampat, Indonesia.
“Sweetlips are very common in the Raja Ampat area. You can see them in popular dive sites such as Kape Cree and Sawandarek jetty. But this time, I was lucky. I was able to find a small group of this fish in shallow water, around 14 meters deep, with full cover by glassfish. The conditions were perfect, clean water, not to deep, and sunny. It was a great opportunity which I'll always remember with this incredible photo.” 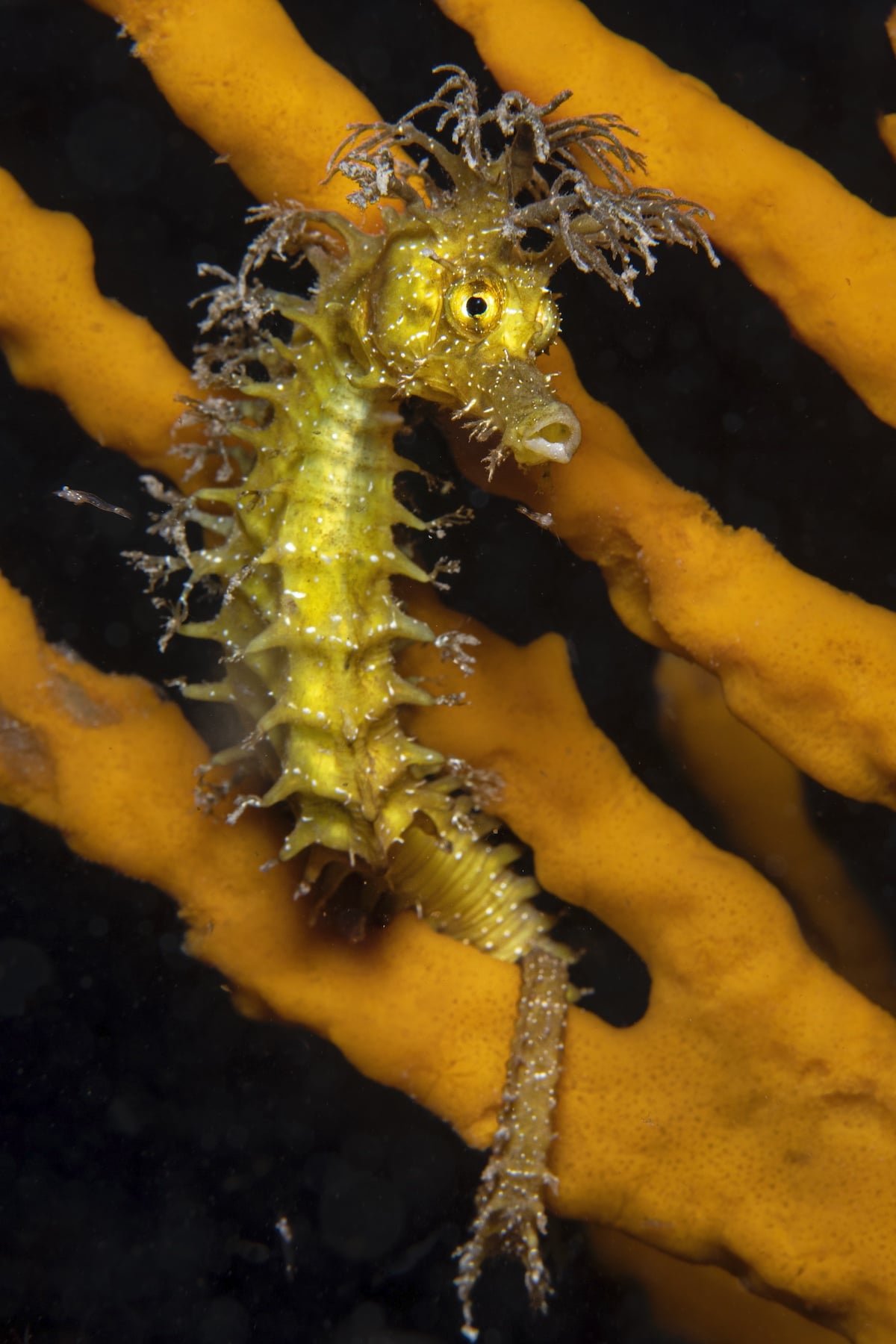 “Gaspare” by Virginia Salzedo
1st Place in Portrait. Shot in Puglia, Italy.
“During a night dive, I met this nice seahorse. I was immediately surprised by his punk hairstyle.” 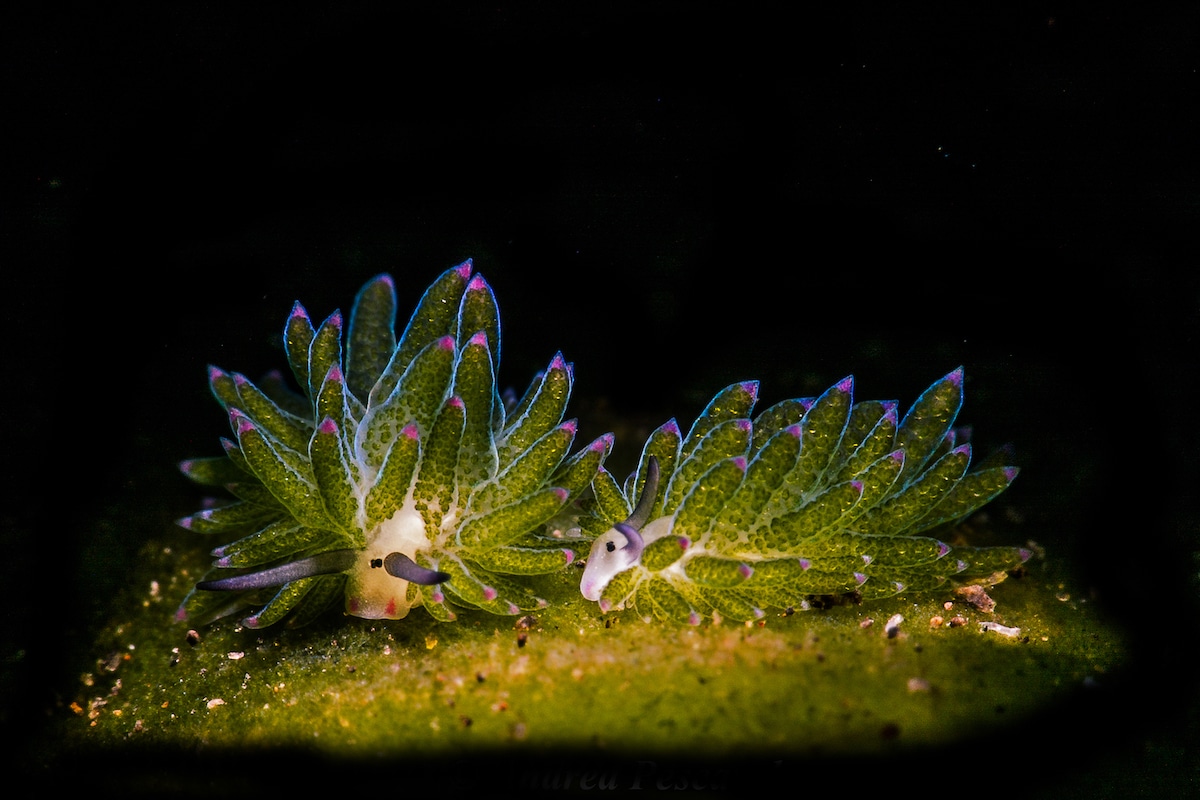 “The Sheep” by Andrea Pescarolo
2nd Place in Nudibranchs. Shot in Tulamben, Bali, Indonesia.
“This type of nudibranch, very common in Tulamben, is very small and lives on a small leaf that moves with the sea current so it is not very easy to photograph with the snoot.” 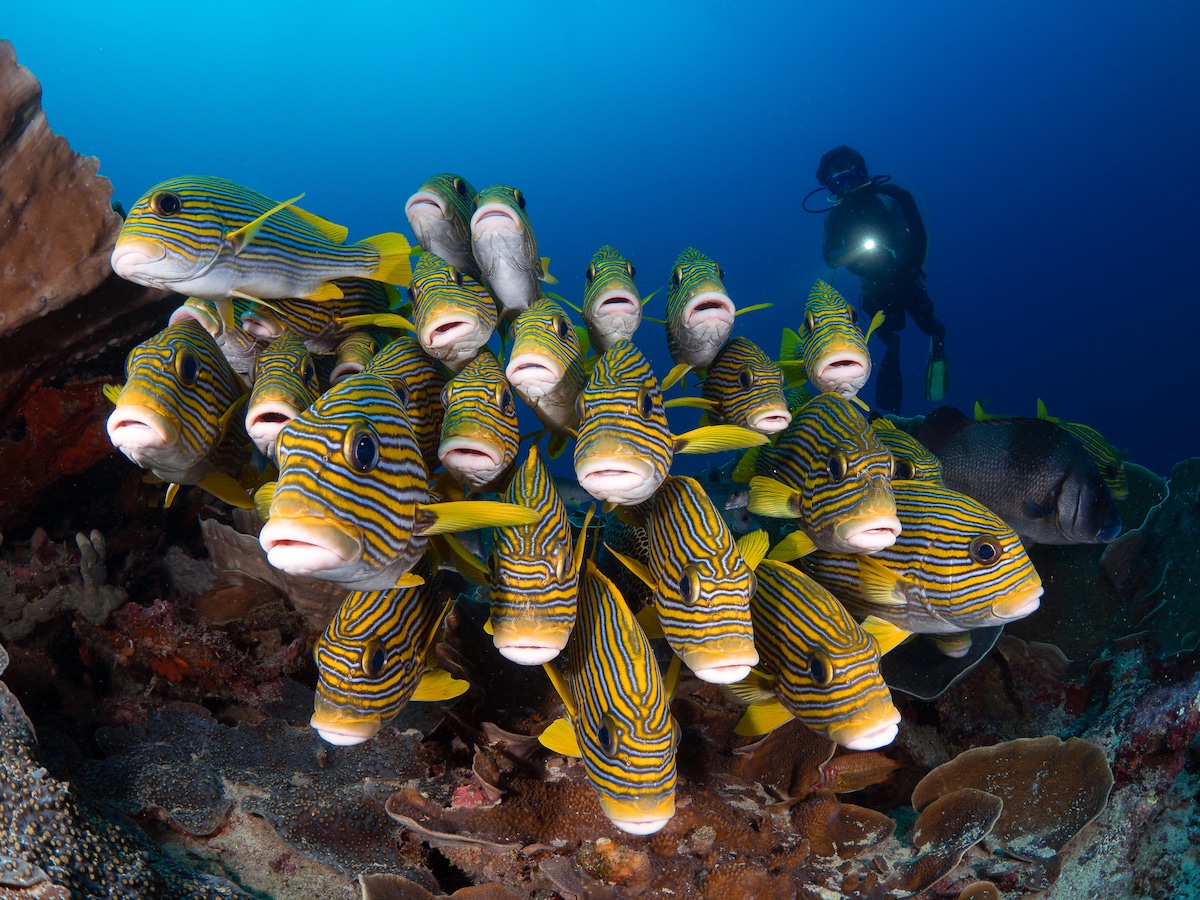 “The Shepherd” by George Kuo-Wei Kao
1st Place in Novice Wide Angle. Shot in Raja Ampat, Indonesia.
“I was taking a photo of a cute school of sweetlips at about 28 meters deep. I couldn't get a satisfying composition until my guide showed up and looked like a shepherd of the school.” 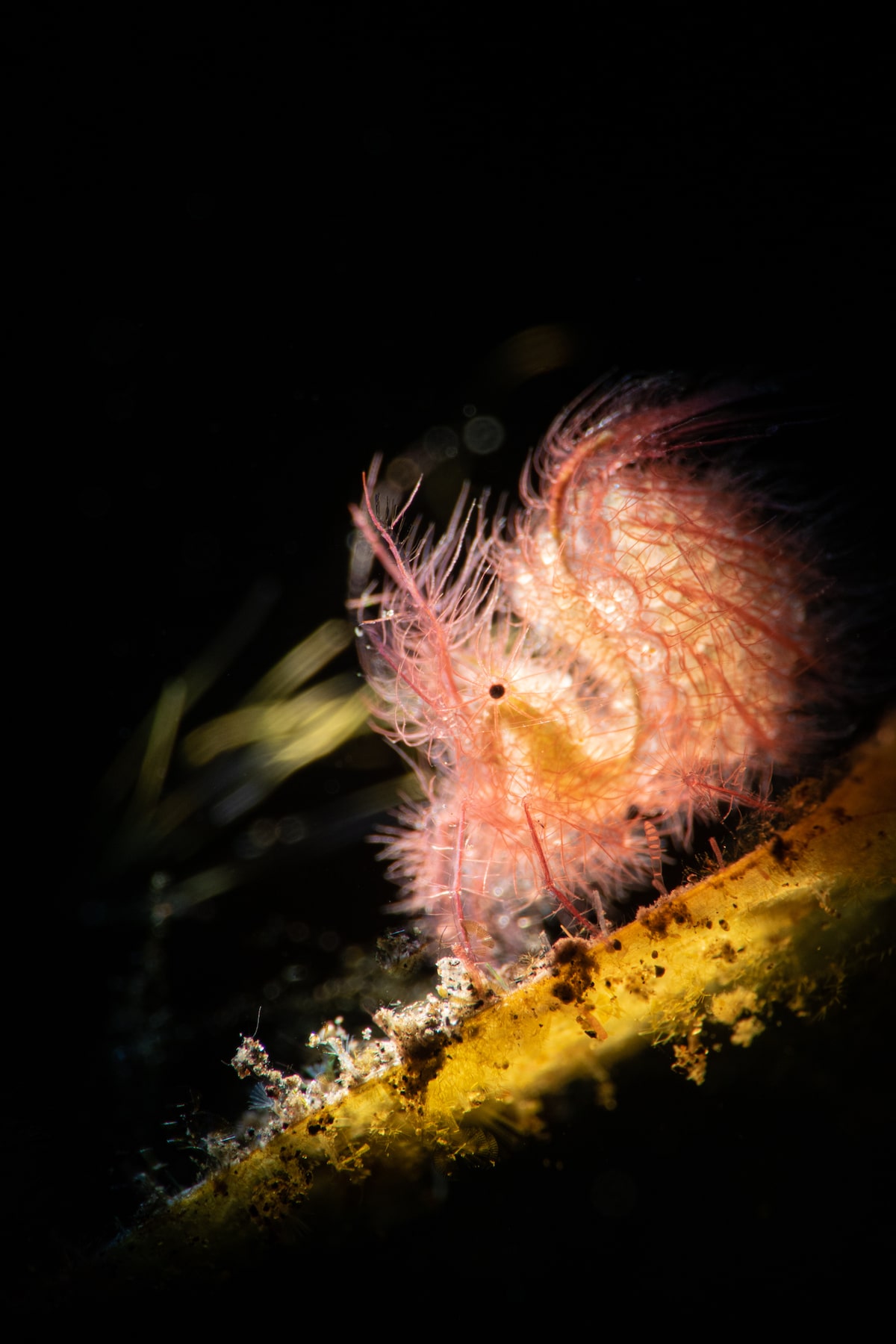 “Hairy Shrimp” by Michael Loh
2nd Place in Novice Macro. Shot in Tulamben, Indonesia.
“Once this subject was spotted by my guide I had to creep up slowly towards it and not come crashing down next to it as hairy shrimps are skittish critters. Next I had to wait for it to present it's profile to me before I could take the shot. I had to adjust my positioning carefully with its movements taking care not to frighten it away.” 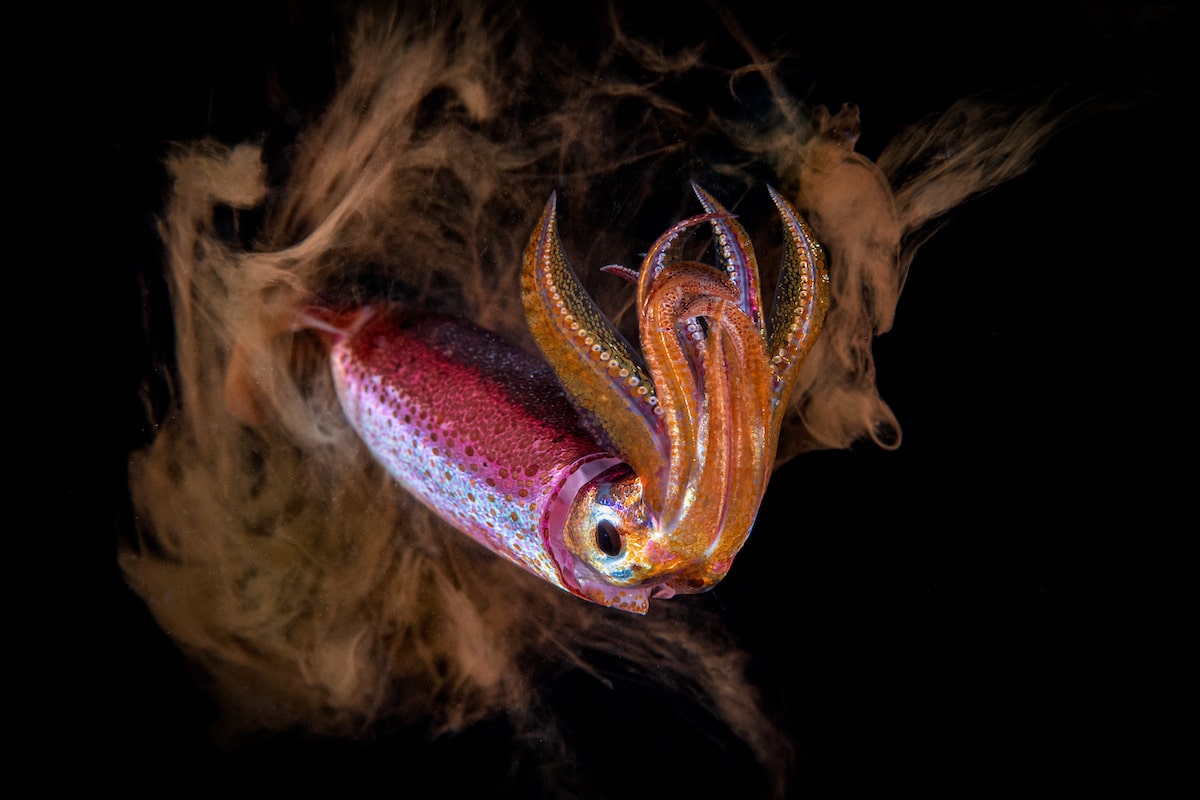 “Lethal Fluid” by Paolo Bausani
2nd Place in Marine Life Behavior. Shot in Anilao, Philippines.
“This squid uses to have a completely different behavior other than those that have been observed in inking cephalopods. Usually, the release of large amounts of ink into the water by the cephalopod is aimed to create a dark, diffuse cloud that can obscure the predator's view, allowing the cephalopod to make a rapid retreat by jetting away; in this case, the cloud of ink is used by the squid for hunting purpose: the ink contains a powerful venom that is capable to seize the prey.” 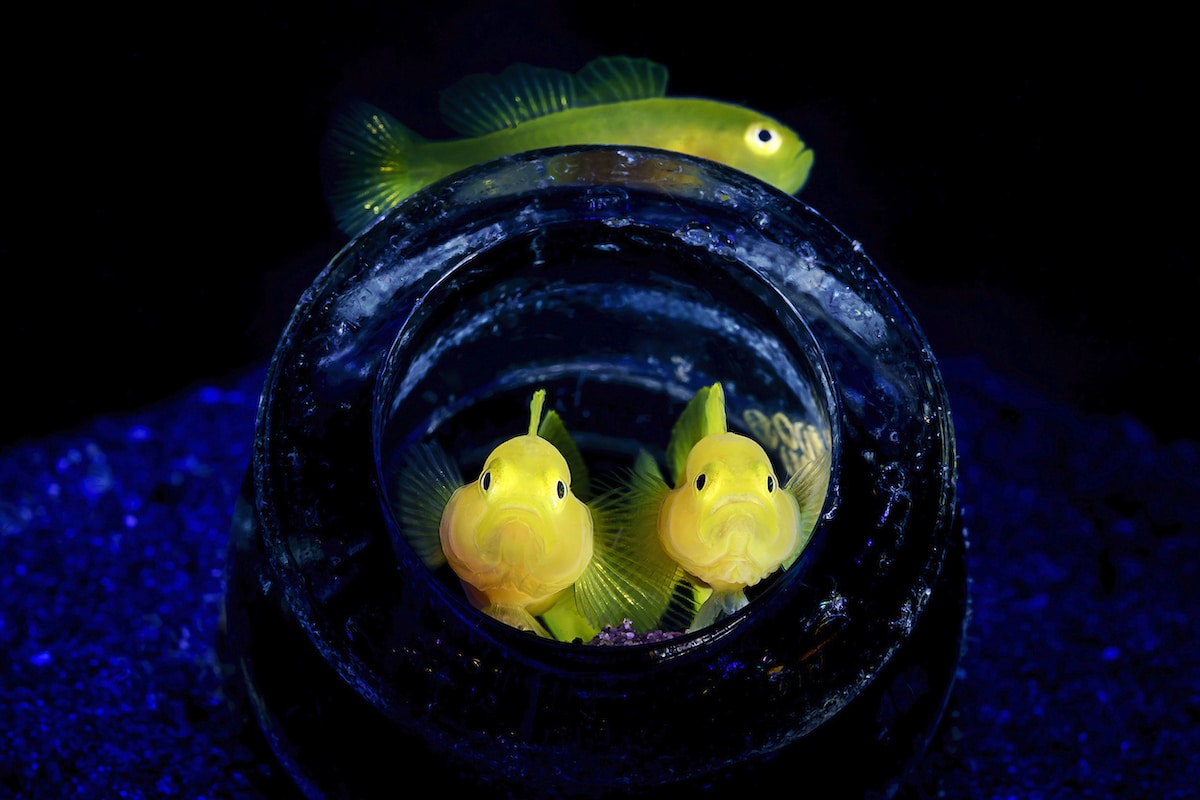 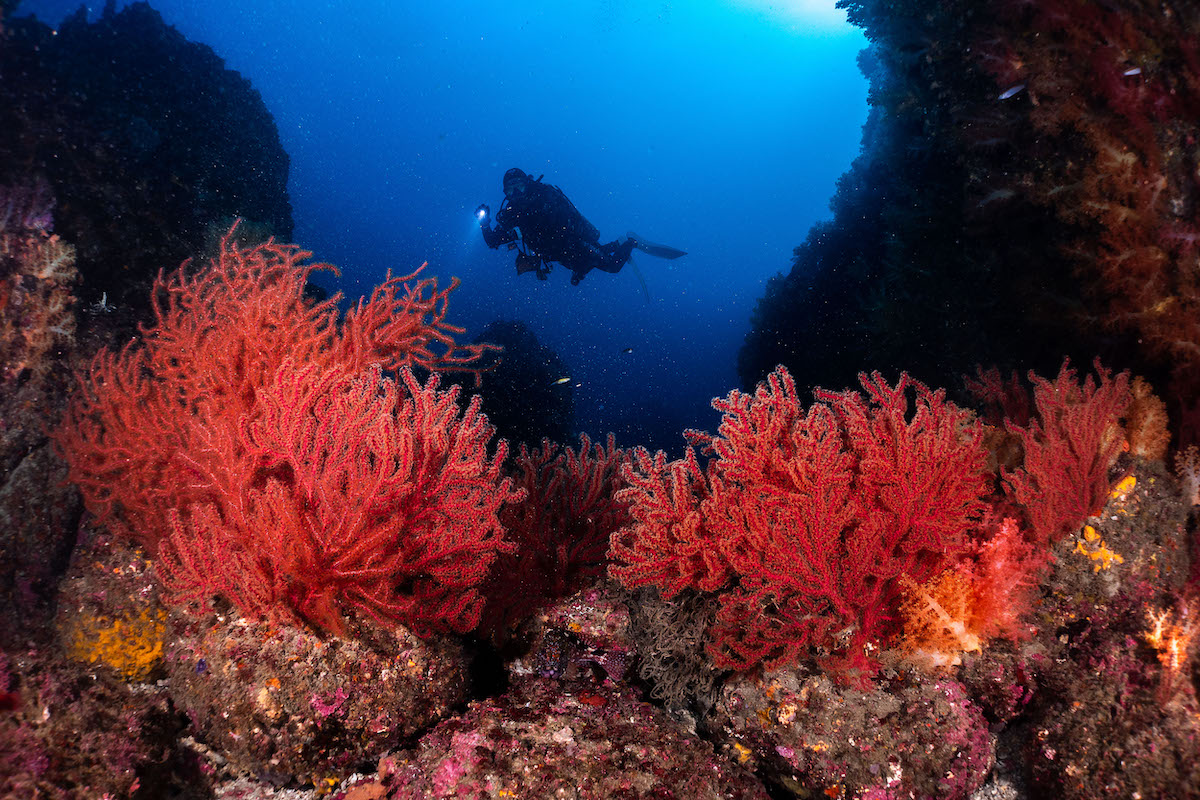 “Red and Blue” by Minsik Roh
2nd Place in Compact Wide Angle. Shot in Jeju Island, South Korean.
“Jeju Island is located in the southern part of the Korean peninsula and is a paradise for soft corals. As Jeju Island was formed from volcano eruption and the underwater topography is special. In addition, it is also has a healthy and diverse ecosystem.
‘Neo-al' is the dive site name with an underwater pinnacle which is located in southern Jeju island, Seogwipo. I jumped into ‘Neo-al' at 8:30 am, October 26, 2019. There was not enough sunlight early in the morning but enough to capture the splendid moments of rocks filled with orange-colored soft corals and dancing damselfishes. While diving, I came across these two big sea fans between two sea mountain-tops and asked my wife, to position herself between sea fans to get an amazing shot.
I hope this photo can help people imagine how wonderful Jeju island's underwater landscape is.” 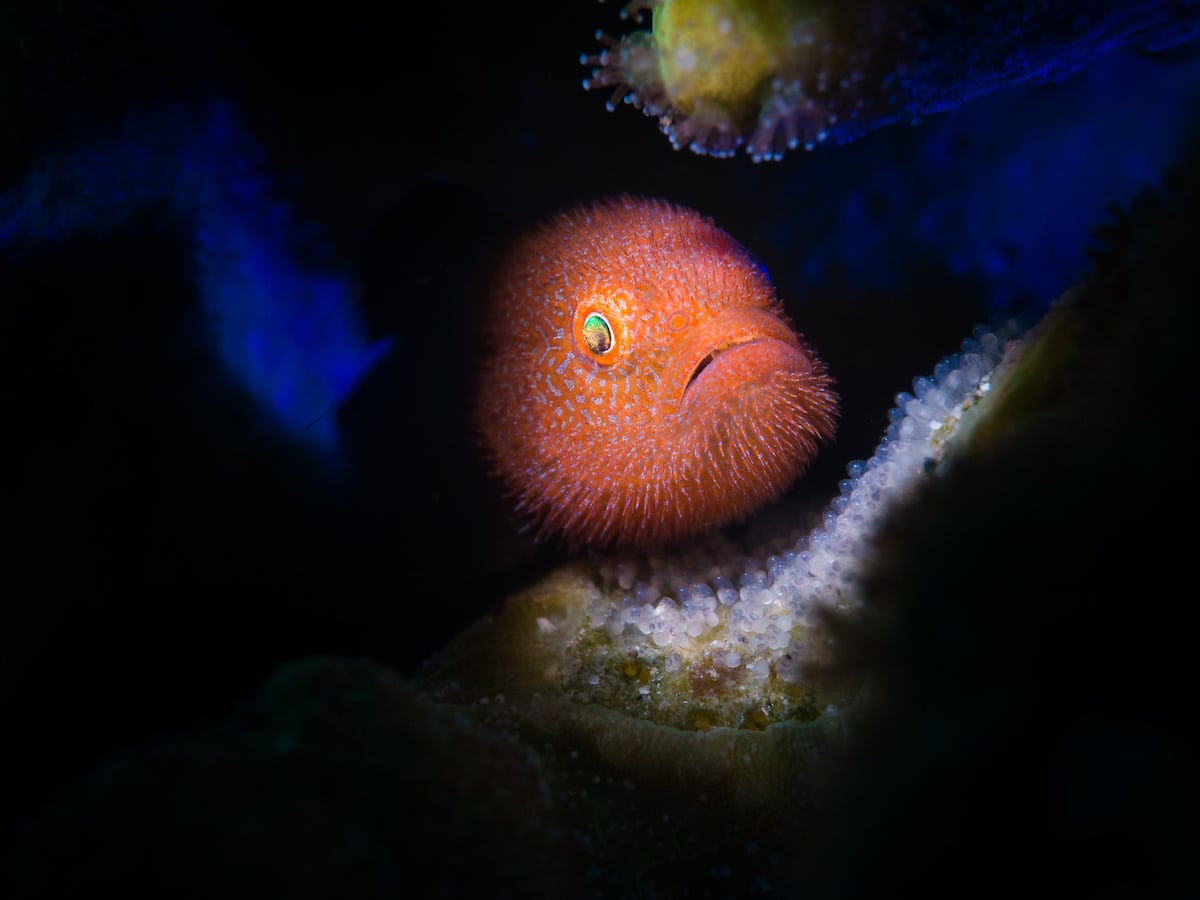 “Ponda Goby with Eggs” by Stan Chen
2nd Place in Compact Macro. Shot in Lembeh, Indonesia.
“This is my first time to encounter Ponda Goby protecting her eggs, and it is so touched my heart so I took my camera to record this rare moment. I hold my breath carefully and waited for 50 minutes to capture this unique picture. In the beginning, I tried many times with different shooting angle but the light was very difficult to shoot into the deep of hard coral. The Ponda Goby is very shy so I kept waiting until we built up mutual trust. By using the blue light as background that makes this picture more harmonious and this is an unforgettable moment to present a peaceful and bright environment for her hatching eggs – we know a new life will be continued.” 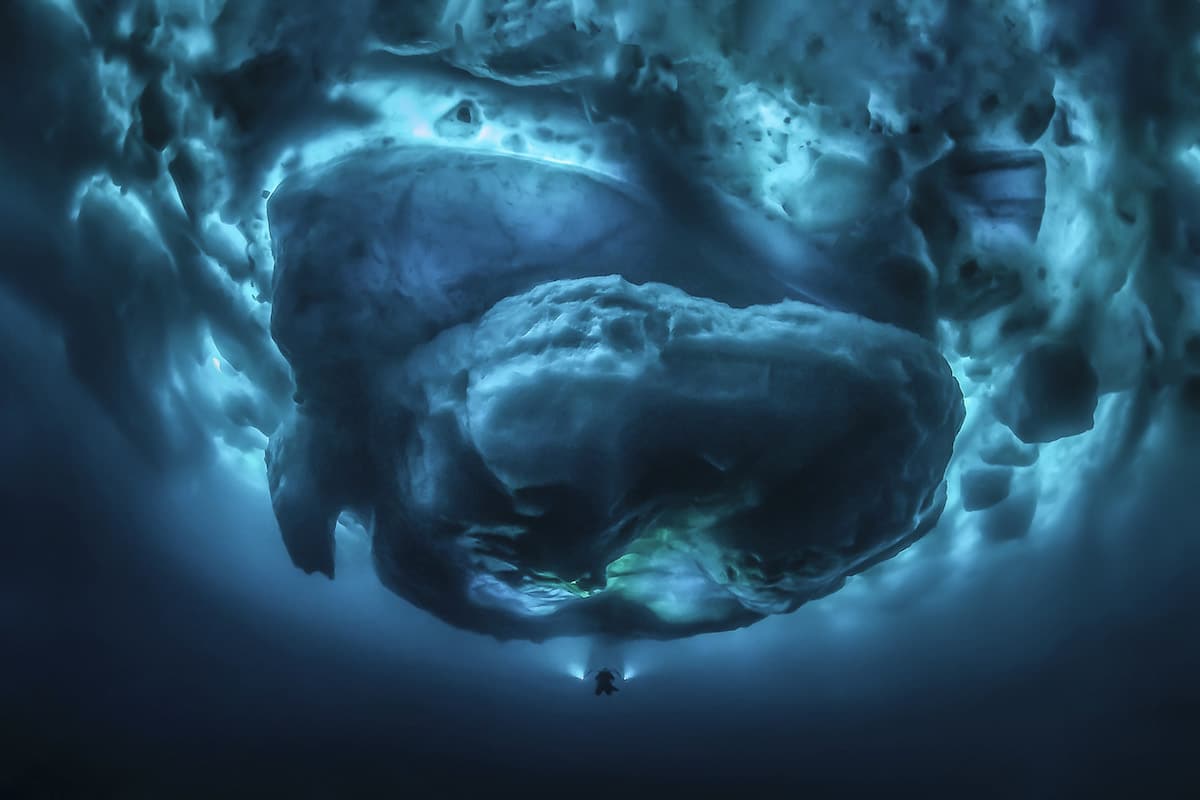 “Icerock” by Tobias Friedrich
2nd Place in Coldwater. Shot in Tasiilaq Fjord, East Greenland.
“We planned to dive underneath icebergs in Greenland and made some holes into the frozen Fjord next to some iceberg that were frozen in. The diver hat some video lights on his camera so I used the opportunity to create some atmosphere with it.”

Page 2/2
Fascinated by the world underwater? Share
Like My Modern Met on Facebook
Get Our Weekly Newsletter
Become a
My Modern Met Member
As a member, you'll join us in our effort to support the arts.
Become a Member
Explore member benefits 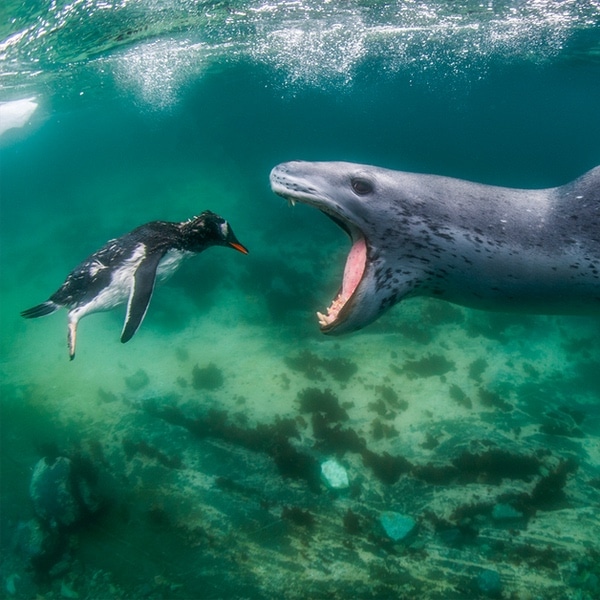 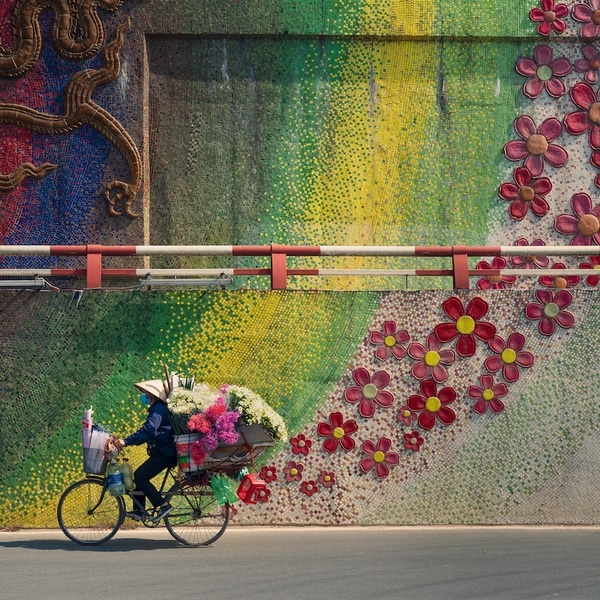 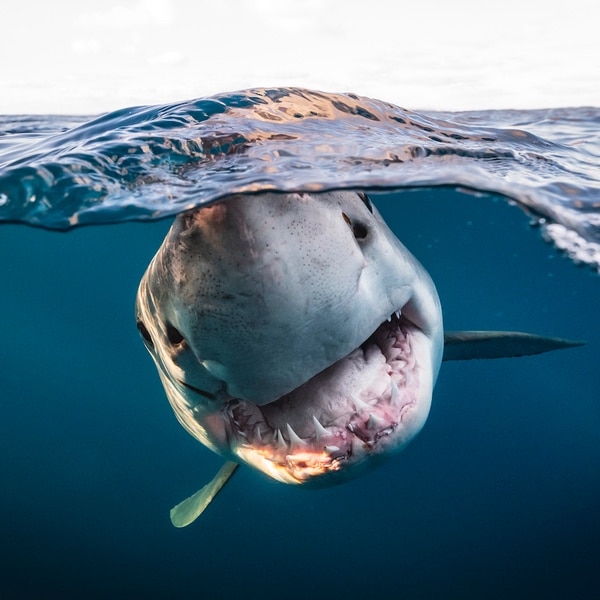