(GIF: TotoBaggins at the English language Wikipedia [GFDL or CC-BY-SA-3.0], via Wikimedia Commons)

Stare at the center black cross for about 10 seconds. What do you see? At first, a gap appears in between each lilac disk for a few seconds. Then, in its place, a blurred green disk appears to be “chasing” the violet dots, moving in a clockwise direction. And if you look long enough, the lilac disks will disappear altogether, and you'll just see a green disk moving in a circle. The Lilac Chaser Illusion, also known as the Pac-Man Illusion, was created in 2005 by vision expert Jeremy Hinton. The optical illusion works due to the combination of several different effects.

It's thanks to the phi phenomenon that we perceive the motion of the disks. This effect is when objects viewed in rapid success created the perception of continuous motion. The green disk appears due to negative afterimage effect. An afterimage is when we continue to see a stimulus after it's disappeared. A negative afterimage is when we see the opposite color of the stimulus, so the green replaces the lilac as the cones of our retina become tired. The effect is stronger when the gaze is held still, which is why the green disk appears after several seconds focused on the same spot. Lastly, the fading of the lilac disks all together is due to Troxler's fading, which is when a blurry stimulus fades into the background if our gaze is held still for long enough. Over time, the afterimage of the grey gap completely replaces the lilac disks, leaving just the green afterimage and grey background. 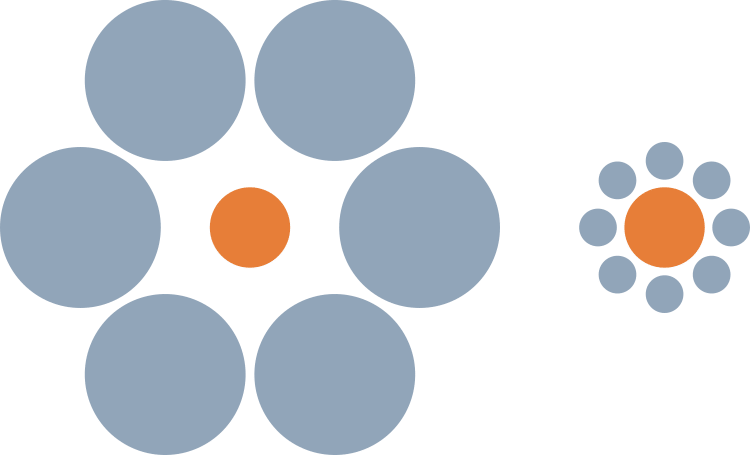 Take a look at the orange circles at the center of these illustrations. Which appears larger to you? Would you believe it if you were told that they are exactly the same size? The one on the right appears larger due to the Ebbinghaus Illusion, also known as Titchener circles. The illusion is based on relative size perception and discovered by a German psychologist at the end of the 19th century. Thanks to visual cues surrounding the orange circles, our brain mistakenly perceives the orange circle on the right as larger. 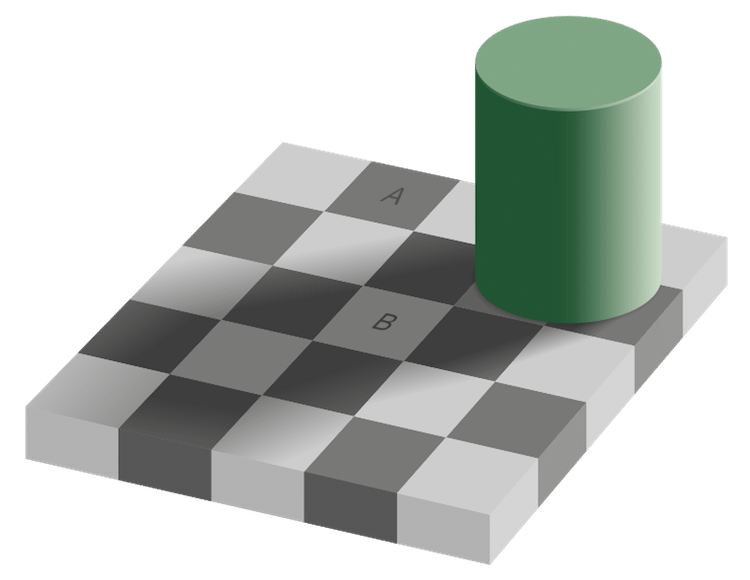 Edward H. Adelson, a professor of Vision Science at MIT, published this optical illusion in 1995. In the Checker Shadow Illusion, squares A and B are actually the same shade of grey, yet square A is perceived as much darker than square B. The explanation behind this illusion involves the brain's perception of 3D objects. The viewer expects that the green cylinder would cast a shadow on the checkerboard, so our mind compensates for the alternating colors it thinks it should fine. In reality, Adelson's image has been created to give the illusion of a shadow without it actually being there. If you still can't wrap your brain around it, open the above image in any editing software and move a color selector over both squares. You'll see the color is the same. Or, watch the below video to see proof in motion. 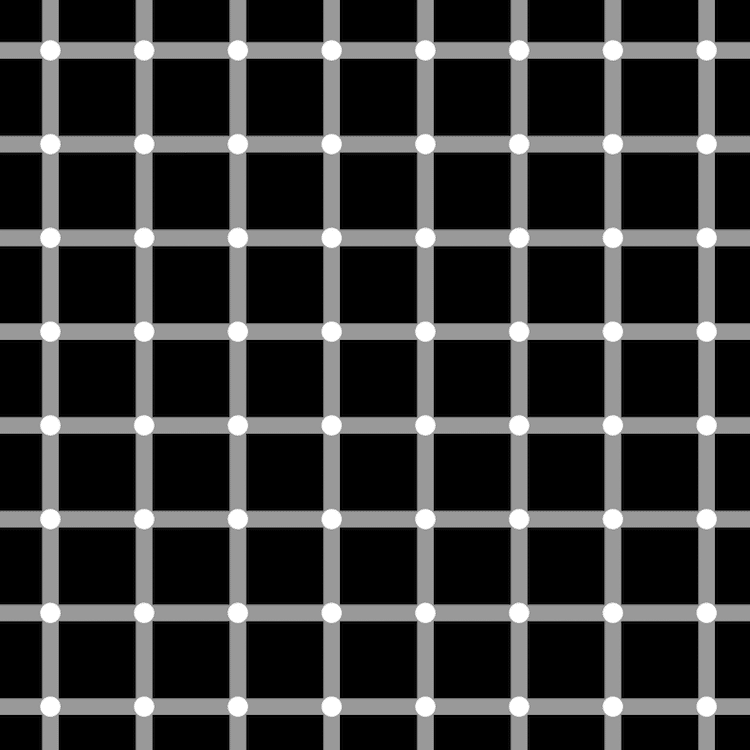 Interestingly, the illusion is created only when the viewer's eyes are not staring at a fixed point, and if the viewer is too close or far from the image, the dark dots disappear. One explanation for the illusion is lateral inhibition, which increases the contrast and sharpness of a visual response. Check out the below video to learn more about how lateral inhibition works in creating illusions.