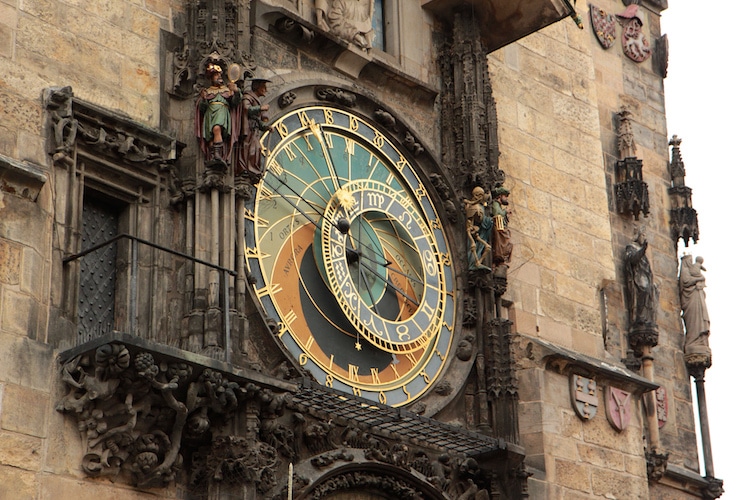 Prague's medieval astronomical clock is not just one of the prettiest timepieces you'll ever come across, it's also one of the most famous examples of its genre. Starting in the 13th century, astronomical clocks began springing up around Europe, using intricate functions to show information such as lunar phases, the position of the sun and moon, and the zodiac at any given moment.

The oldest part of the Prague astronomical clock—or Orloj—dates to 1410 and is located in the heart of Old Town Square. Less than a hundred years later, the calendar dial was added and Gothic sculptures were installed to adorn the clock tower. Now, tourists flock to Old Town Square to gaze up at Prague Orloj, with many waiting until the top of the hour. Each hour, animated figurines flanking the clock are set in motion. The figurines, which were added in the 1600s, represent four vices. Vanity is shown as a man admiring himself in a mirror, a miser holding a bag of gold represents greed, while another strumming an instrument is to show lust or “earthly greed.” The fourth sculpture, a skeleton, represents death and rings the bell each hour as the other figurines shake their heads.

Over time, the clock has been continuously repaired, and was almost destroyed on May 8, 1945 at the hands of the Nazis during the Prague Uprising. The calendar plate suffered extensive damage and had to be restored, with the clock resuming function in 1948. The Prague Astronomical Clock has continued to undergo restoration over the years, with the most recent effort starting in July 2017 and ending in January 2018. 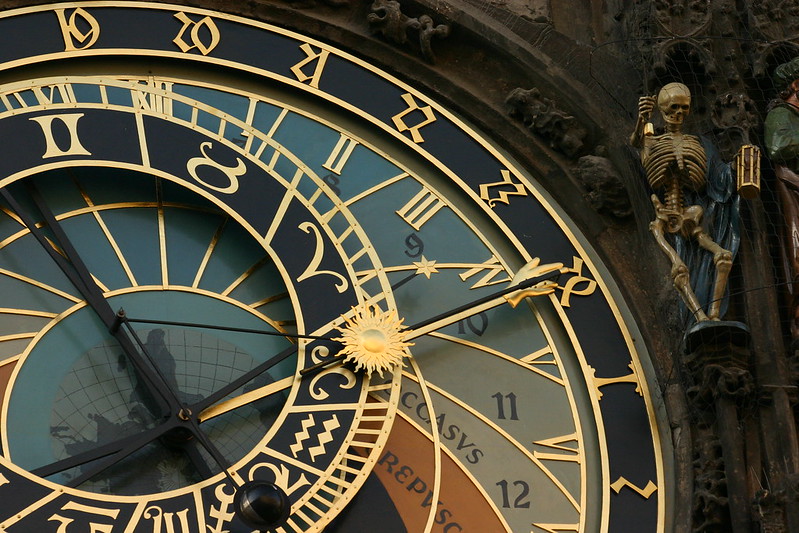 How to Read the Prague Astronomical Clock 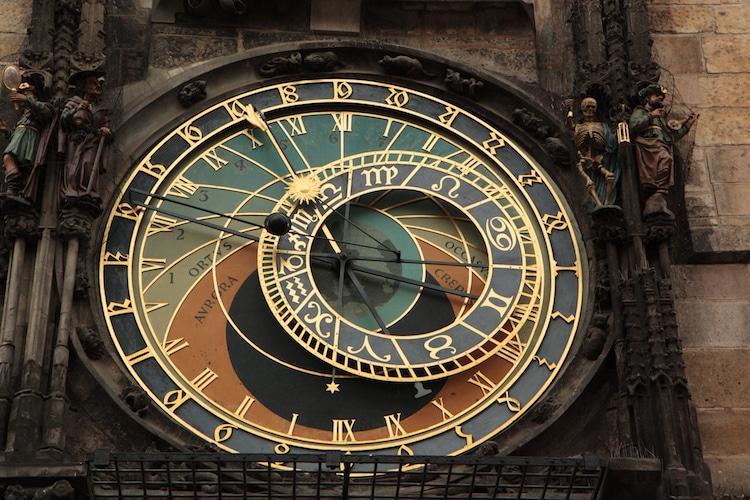 With so many ornate mechanisms, how does one tell time using the astronomical clock? Starting with the oldest, original portion of the medieval clock, going disk by disk, it becomes easy to see how the timepiece functions.

The colorful stationary plate at the back of the clock face represents Earth and our view from the sky. With Earth in the center, gradations of color signify different moments in the day, from the orange hue of dawn to the uppermost blue of daylight. During the day, the wand representing the sun sits against the appropriate color so, for instance, at night you'll find it against the black circle.

The outermost numbers, set against a black background, tell Old Czech Time or Italian hours. In Italian hours, the “24” represents the hour of sunset, and so this ring slides throughout the year as appropriate. Alternatively, the inner ring of Roman numerals indicate the normal 24 hours in Central Eastern Time, which is Prague's local time. 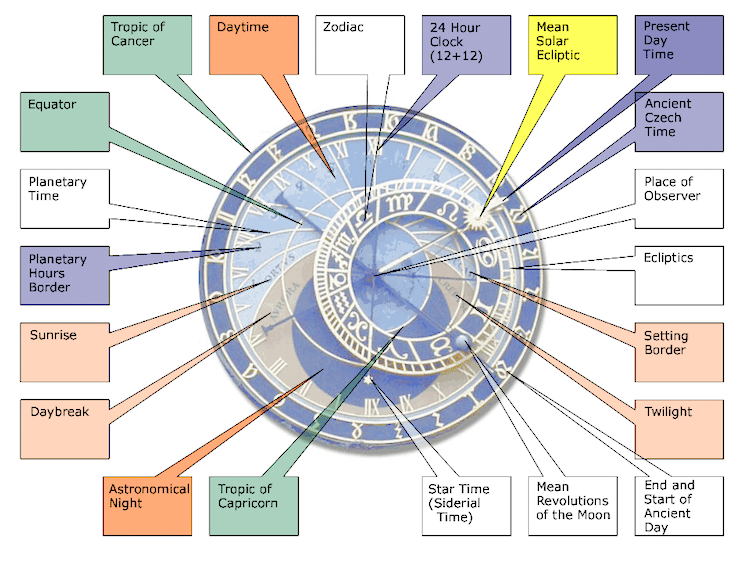 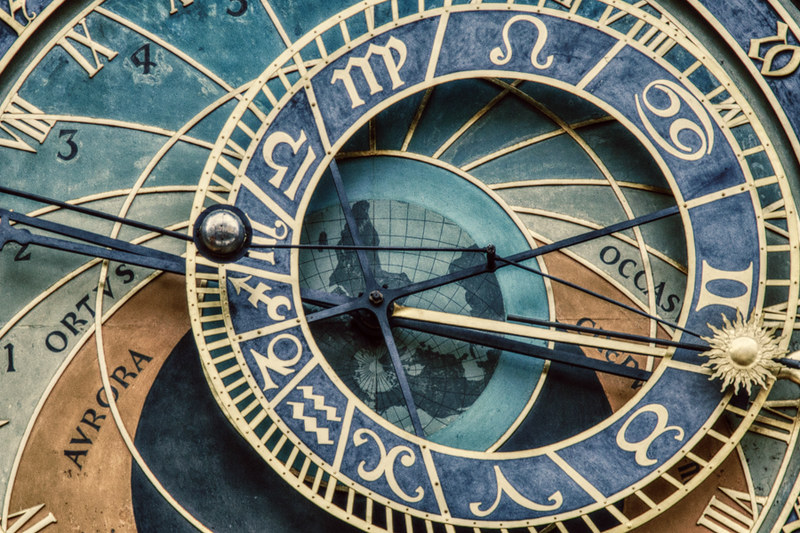 But the clock is about much more than telling time. Two separate wands representing the sun and the moon move around the zodiac ring. The sun moves counterclockwise against the ring, and gives an indication of where the sun and moon are in their orbit around the Earth. The moon wand is half white and half black in order to show the current cycle of the moon. Interestingly, the rotation of the ball showing the lunar phases is entirely owed to gravity, something unique in this genre of timekeeping.

A small golden star shows the position of the vernal equinox and sidereal time based on the Roman numerals. Sidereal time is used by astronomers to locate celestial bodies and though all this information may seem odd to us now, consider that astronomical clocks functioned as a sort of astrolabe, and were meant to give a concise vision of the state of the universe at any given moment. 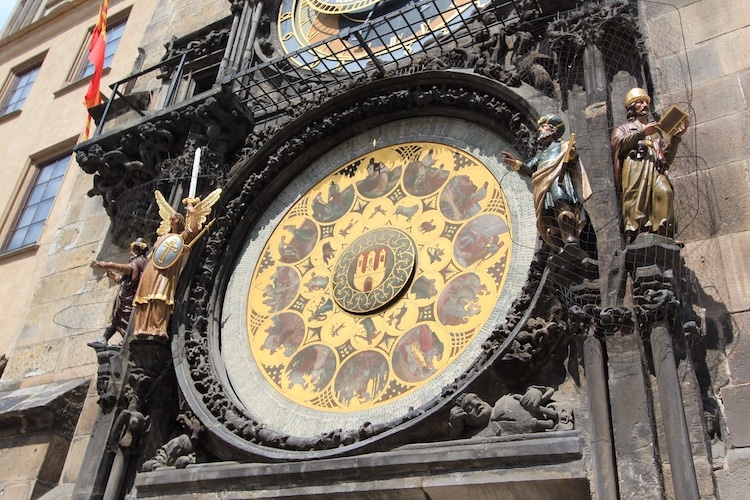 The calendar plate, which sits just below the astronomical clock, was redesigned by Josef Mánes in the late 1800s. His original is now located in the Prague City Museum, with a copy in its place on the clock tower. The plate shows Prague's Old Town crest in the center, surrounded by 12 circles featuring the signs of the zodiac. This is surrounded by a larger ring of circles that represent the months of the year by demonstrating workers. For instance, in August a farmer flails crops while in October grapes are harvested.

The calendar plate rotates throughout the year so that the current day is always shown at the top. 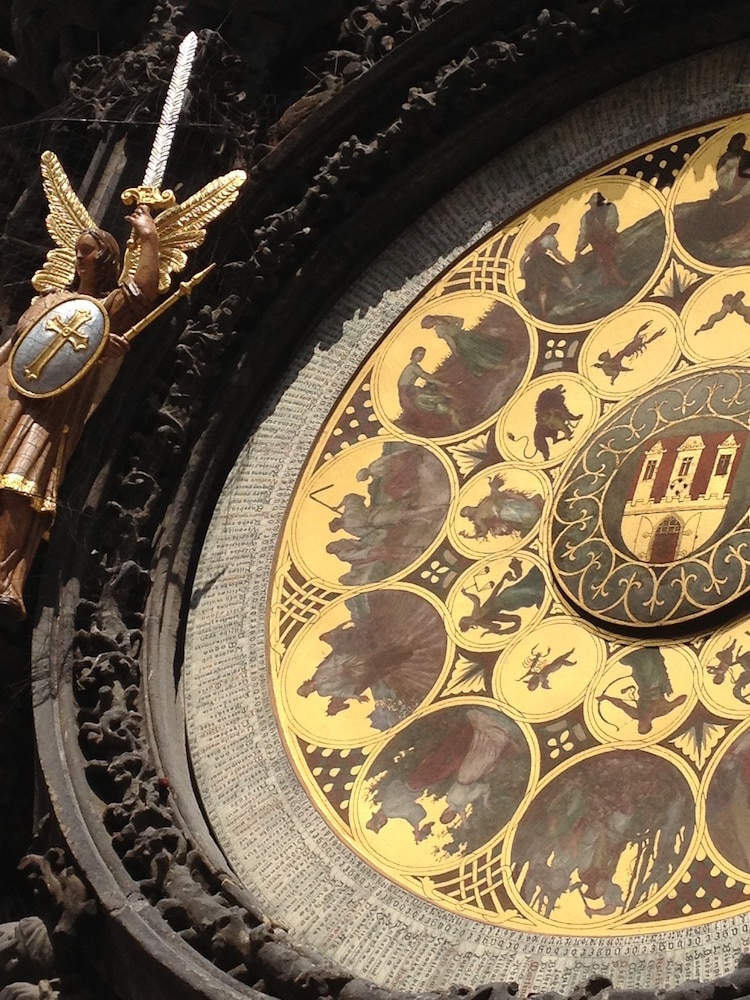 Prague's Orloj is one of the city's most popular attractions, so if you want to view it in solitude, away from the masses, it will take some planning. 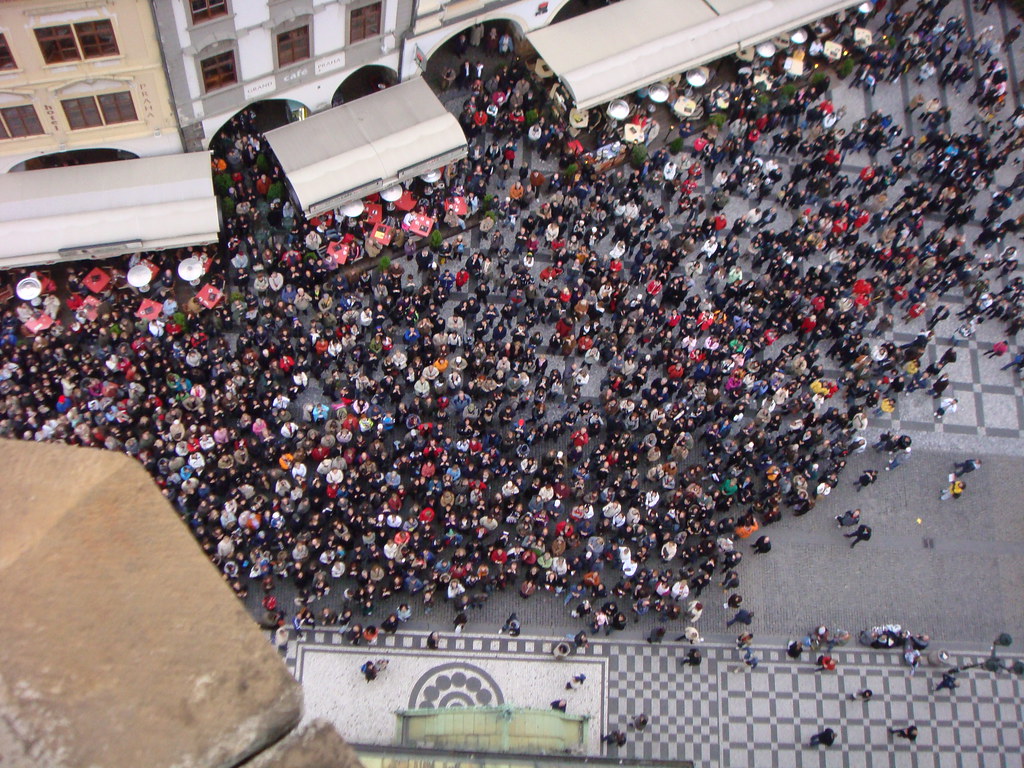 In general, crowds really flock around the top of the hour to see the moving statues. If catching this show isn't important to you, you'll surely find fewer people in between the hour. If you really want to catch the action, try to arrive at least 15 minutes early so you aren't stuck in the back of the crowd.

And, in general, late afternoons and early mornings are quieter times, as most people do their viewing mid-day. 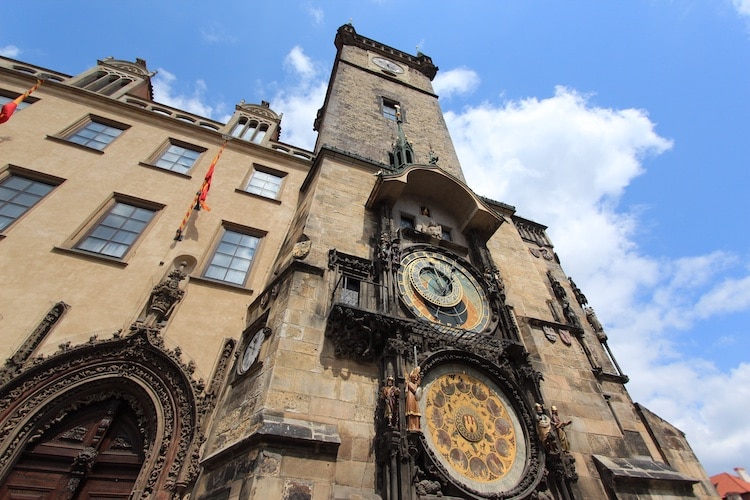 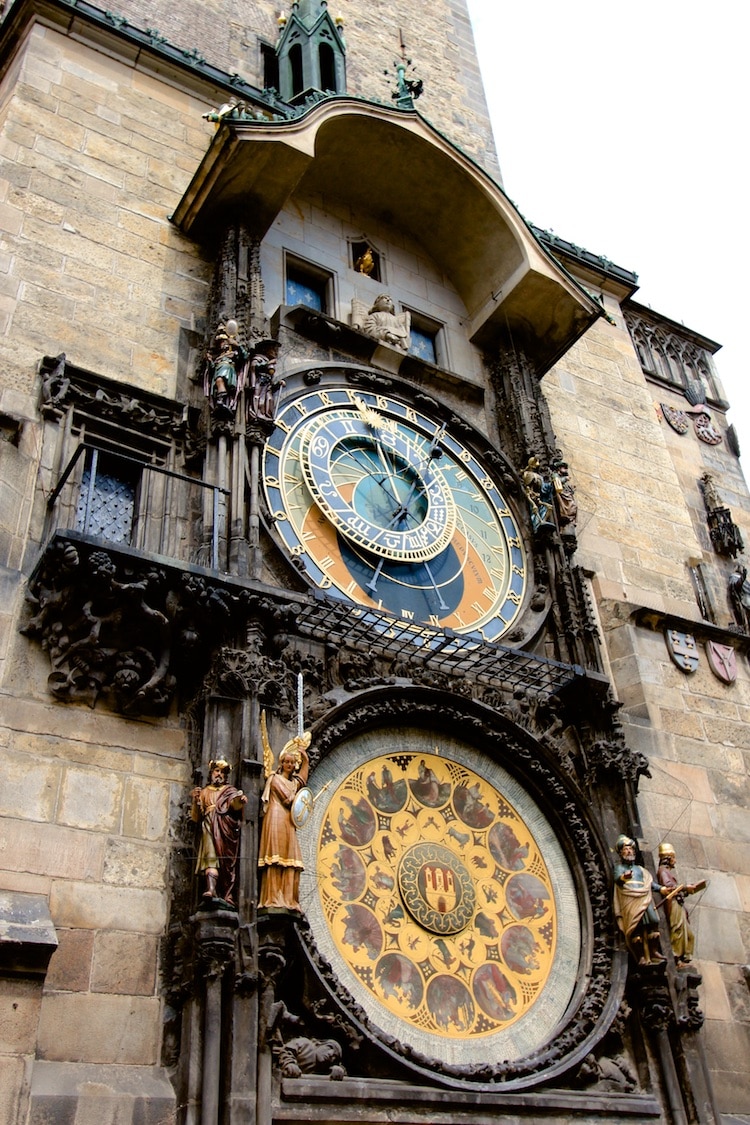 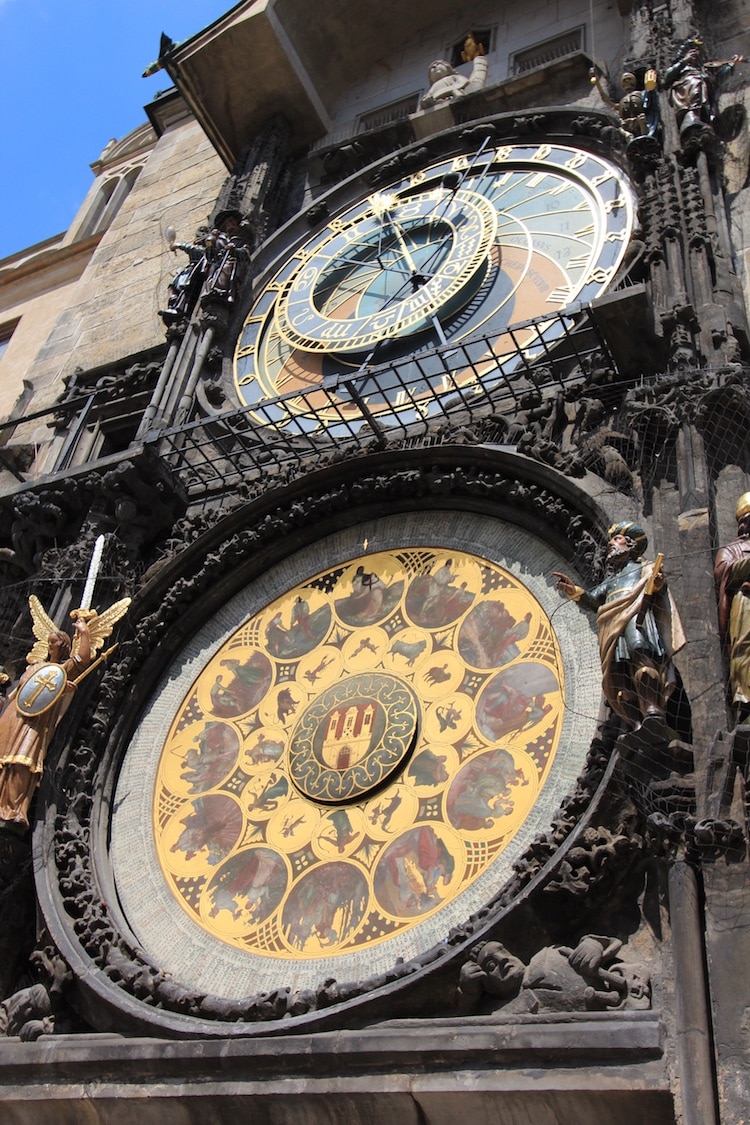 All images via Jessica Stewart except where noted.

The Ghosts of World War II