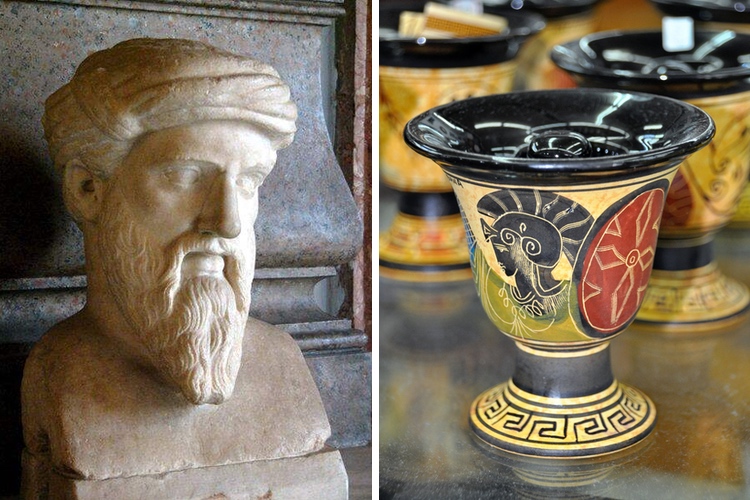 If you didn't think the ancient Greeks had a sense of humor, this clever drinking cup might convince you. What looks like an ordinary cup is actually a practical joke waiting to happen and it was invented by none other than Pythagoras. This philosopher and mathematician is probably most commonly known as the man behind the Pythagorean theorem, taught in geometry classes around the world. But there was also a playful side to this scholar, as demonstrated by what's known as the Greedy Cup, Cup of Justice, or Pythagoras Cup.

The chalice looks like any other, but if filled too much all the liquid gets siphoned out of a hole in the bottom. The design means that, at first glance, there's no sign that you might spill your drink, so imagine the surprise of greedy party-goers when they attempted to overpour and ended up with a splash on their laps. By simply applying basic principals of gravity and atmospheric pressure, the ancient philosopher created the ultimate party trick.

In order to understand how it works, you need to look at a cross-section of the Pythagoras Cup. When viewed in this manner, the hidden channel that snakes through the central column is clearly visible. As liquid is poured into the cup, it begins to make its way up the channel. Those who stop their pour just at the top of the central column will be none the wiser and can drink without issue. But, should someone get a bit greedy, the pressure becomes too much and the liquid continues to build up in the channel. From there, gravity does its work. The siphoning effect causes the liquid to spill out through the bottom of the cup until you find yourself without anything in your glass.

These cups are still sold throughout Greece, where they are called o kounenos tis dikaiosynis (the Cup of Justice). If you want to give the prank a try and aren't going to Greece anytime soon, they're also available on Amazon.

This diagram demonstrates the siphoning effect of the Cup of Justice, an ancient practical joke.

Watch this video to learn more about how the Pythagoras Cup works.

15+ Creative Gifts For People Who Love Math and Science