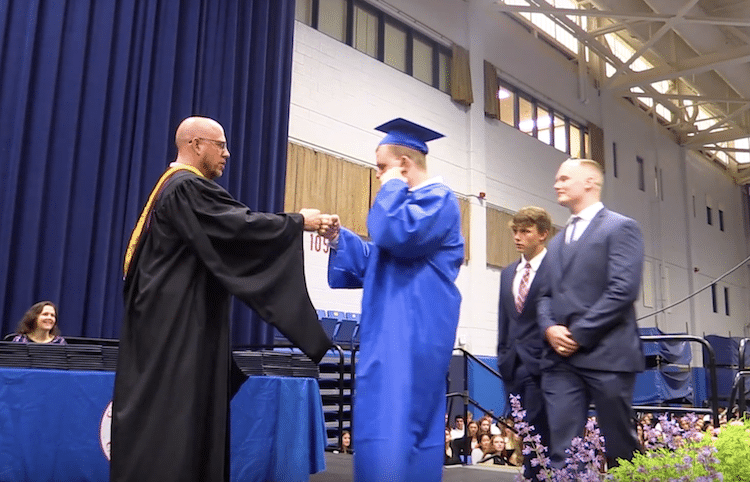 During a high school graduation, it's standard for students to receive rounds of applause as they take to the stage. While many graduates are happy to hear their family and friends clap and cheer, some, like Carmel High School senior Jack Higgins, are particularly sensitive to these sounds, and would much rather be celebrated in silence—a wish that his fellow graduates respectfully fulfilled on June 20, 2019.

Higgins, who is nonverbal, has a severe form of autism. For the last eight years, he has been enrolled in his school's program for students with cognitive, learning, or behavior challenges. Though his parents hoped he could participate in this year's graduation ceremony, they were worried that he would be overstimulated by such a busy and boisterous setting.

Fortunately, the school's principal had a solution: the audience could offer Higgins a silent standing ovation. “I ran it past my assistant principal because he would be honest,” Principal Lou Riolo said. “We will do the National Anthem and then there will be a pause and I will explain what we will do. We are going to be silent and quiet because this is for Jack.”

During the ceremony, Riolo shared his idea with the 2,200 people in attendance. While he had complete confidence in his plan, he was still amazed by what he heard when Jack—who preemptively had his fingers in his ears—walked onto the stage: nothing.

To Riolo, this silent spectacle stands out as a win for Jack, his family, and the Carmel High School community as a whole. “What Jack did by himself, his internal mechanism, that’s the real story. That’s the bravery,” Riolo said. “It’s just awesome. It was just holy, wow. How could you not get moved? It was a home run for Jack and it was a home run for our kids.”

Watch Jack Higgins, a student with a severe form of autism, receive a silent standing ovation during his high school graduation.