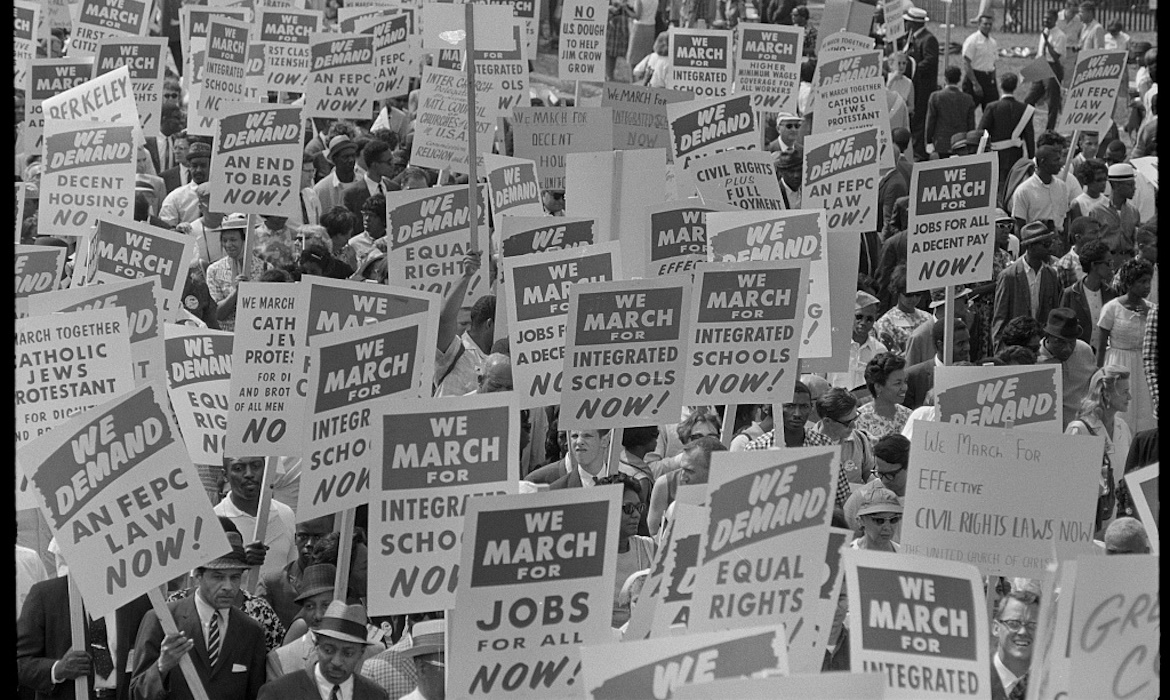 Signs carried by many marchers, during the March on Washington, 1963 (Photo: The Library of Congress via Wikimedia Commons)

Art has long been a tool of expression and documentation in times of revolt, protest, and upheaval. Whether during periods of revolution, war, or social change, artists have always strived to capture the spirit of the moment. It was no different during the Civil Rights Movement—when the raging undercurrents of indignation and disgust at the unjust treatment of African Americans bubbled to the surface of America’s consciousness during a period of dramatic struggle for equal rights.

Read on to learn more about the Civil Rights Movement and several artworks that illustrate the trials endured by Black Americans during their fight for equality.

What Was the Civil Rights Movement and When Did It Occur? 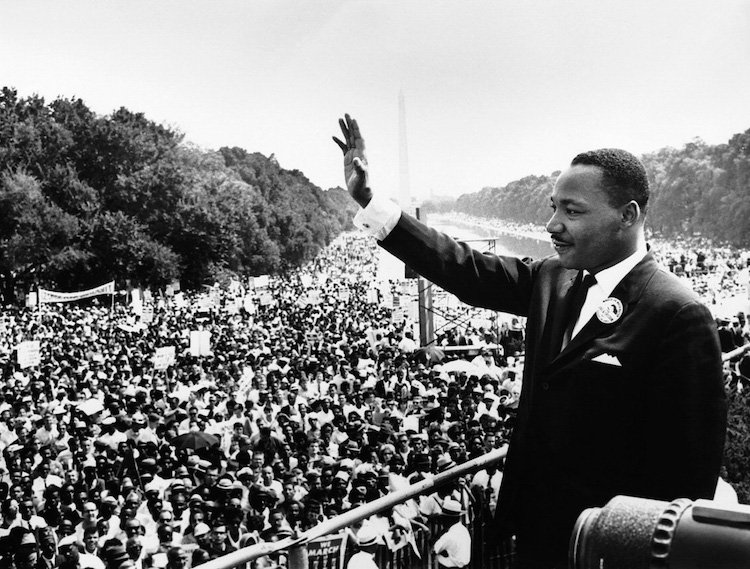 Martin Luther King Jr. addresses a crowd from the steps of the Lincoln Memorial where he delivered his famous, “I Have a Dream,” speech during the Aug. 28, 1963, march on Washington, D.C. (Photo: Wikimedia Commons [Public domain])

The Civil Rights Movement has a decades-long history that begins with the abolition of slavery after the end of the American Civil War in 1865. Though the institution of slavery itself was put to an end with the victory of the North over the South, the prejudice, racism, and discrimination against Black people that had been cultivated almost from the outset of the young country’s birth would not be so easily abolished. Though African Americans were emancipated and granted the constitutional rights of citizenship with the Thirteenth, Fourteenth, and Fifteenth Amendments to the U.S. Constitution in the five years following the Civil War, efforts were increasingly made to deprive them of basic civil rights by way of unjust state and local legislations called Jim Crow laws. 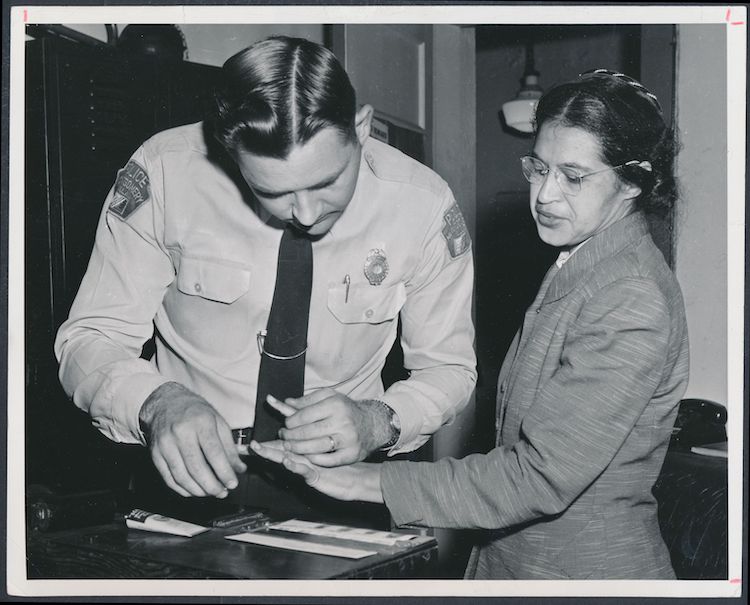 Rosa Parks being fingerprinted on February 22, 1956, by Deputy Sheriff D.H. Lackey as one of the people indicted as leaders of the Montgomery bus boycott. This was a few months after her arrest on December 1, 1955, for refusing to give up her seat to a white passenger on a segregated municipal bus in Montgomery, Alabama. (Photo: Associated Press [Public domain] via Wikimedia Commons)

The main chapter of the Civil Rights Movement occurred during the decades of the 1950s and 60s. During this period, many efforts of peaceful resistance, civil disobedience, and protest were enacted in order to fight the discrimination and prejudice against Black Americans that relegated them to second-class citizens. Activists fought to end segregation, secure equal rights, and ensure African Americans the freedom to exercise their right to vote.

Thanks to their efforts, many measures were taken at the federal level to ensure the protection of the rights of Black Americans and other minorities—including the passage of federal laws like the Voting Rights Act of 1965 and various iterations of the Civil Rights Act. 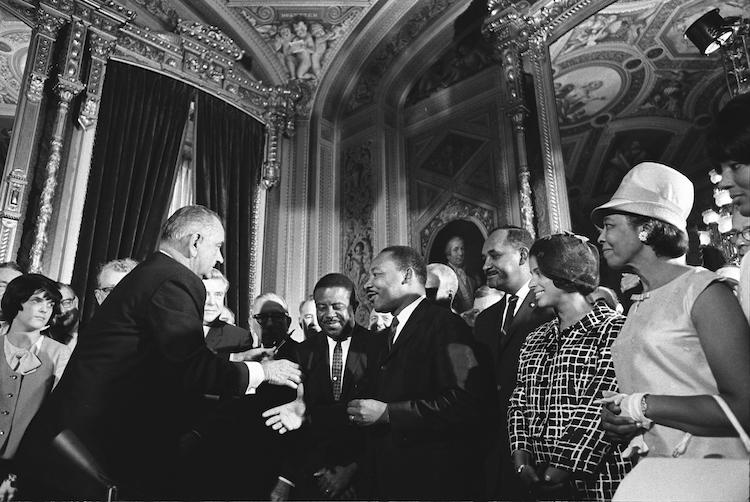 Powerful Artworks in the Struggle for Civil Rights

Jacob Lawrence painted this scene after a visit to New Orleans in 1941. Though he had been told stories of the South and even depicted them in the numerous canvases of his Migration series, this was the first time he had been faced head-on with the realities of the heightened racism and Jim Crow laws of the South. His mother was from Virginia and his father from South Carolina, but he had never experienced life in the South firsthand—having grown up mainly in the New York neighborhood of Harlem.

Though life in the North wasn’t perfect either, it was quite a shock to be faced with the brutal realities of the South, where legislation enforced discrimination and the treatment of Black people as second class citizens. In Bar and Grill, Lawrence depicts this paradoxical reality where people were segregated according to the color of their skin.

David C. Driskell had just moved to the South only weeks after the infamous lynching of 14-year-old Emmett Till. Knowing the power of art to “stir the consciousness of a people,” he painted Behold thy Son in response to that horrifying event. Drawing on religious iconography and symbols from paintings of the crucifixion of Christ and the Pieta, Driskell evokes themes of innocent sacrifice in his emotional and jarring work.

While Emmet Till’s lynching wasn’t the first (nor the last), the widespread coverage of the event and the circulation of the horrifying photographs of his battered and mangled body marked a tipping point. “This crime awakened in most African Americans a sense of rage that helped prepare us for the revolutionary journey [to fight for justice and equality that] we would eventually take,” Driskell later remarked.

Alston was inspired by the bus boycott in Montgomery, Alabama to paint his striking abstract scene entitled Walking. Rather than painting one of the more well-known figures of the movement—such as Rosa Parks or Martin Luther King Jr.—he chose to focus his scene on the nondescript forms of women and children who walked to work and school day after day in protest of the segregated city buses. It was these boycotters themselves who comprised the backbone of the movement, though they are often overlooked in favor of more prominent activists and leaders.

This scene also serves to elicit the electrifying spirit of the marches for equality and justice that defined the Civil Rights Movement.

In addition to the enactment of Jim Crow laws that barred them access to many basic civil rights, African Americans and other minorities were also menaced by the threat of attacks from white supremacist groups. In this almost abstract depiction with flamelike swirls of red and blue infiltrating masses of gray gloom and tiny jagged figures of white, Lewis alludes to the ominous nighttime meetings of groups like the Ku Klux Klan. The mingling of red, white, and blue call to mind the American flag, which was often flown at such gatherings—using the façade of patriotism to justify their hatred and attacks.

Lewis transitioned more towards abstract art throughout his career and believed that “esthetic ideas should have preference” over political or social concerns. However, as evidenced in Evening Rendezvous, his disquiet at the problems of his day and the African American struggle for civil rights often inspired his work.

Andy Warhol was known to blur the line between art and mass media. In the 1960s, he began to create a variety of prints based on images from popular media such as news sources and magazines, which he would then alter and display as art. This image in particular is based on a photograph taken by Charles Moore of a man being attacked by dogs under the command of the police, who were seeking to break up a series of protests against segregation in Birmingham, Alabama. The police efforts quickly turned violent, and the images captured of the fallout became iconic.

Warhol made his own changes to the image by reversing and enlarging it, while also cropping it in closer to the height of the conflict. He also significantly increased the contrast, heightening the jarring nature of the subject itself. Warhol was said to have referred to the event depicted as a “blot on the American conscience,” revealing his attitude towards the injustices that were taking place.

Using a variety of staining techniques to achieve abstract compositions with no figurative point of reference, Sam Gilliam began using diluted acrylics to create paintings like this one in the late 60s. Without its title, the viewer has no parameters to operate within when interpreting the imagery and visual experience the painting provides. The artist entitled this abstract work April 4—the day when Martin Luther King Jr. was assassinated in 1968.

Gilliam lived in Washington D.C., where riots broke out after the news of King’s assassination. Though he painted this work a year later, evidence of the tragic event was still apparent in the unrepaired damage of the looting and fires that plagued his inner-city neighborhood during the height of the riots. Standing at 9 by 15 feet, this artwork evokes the nuanced emotions experienced by many Black Americans after this event—of grief at Dr. King's death and also of hope inspired by his legacy.

The late 1960s and the onset of the 70s saw the rise of the Black Power movement—a somewhat more radical offshoot of the Civil Rights movement that sought to encourage pride in Black American’s African heritage and reject the norms of conformity to white cultural standards. In this graphic print, two of the more well-known symbols of the movement are evident—their raised fists in the Black Power salute and their hair styled in afros. The bold message to “unite” is printed in bright contrasting colors in the background, in an attempt to encourage the unified efforts necessary to bring about change.

Barbara Jones-Hogu—the artist who created this piece—was a founding member of a collective of artists who sought to visually represent and bring attention to the ideals of the Black Power movement. This artist collective was known as AfriCOBRA (the African Commune of Bad Relevant Artists).

Though African Americans were guaranteed the right to vote under the Fifteenth Amendment, many states found ways—through legislation and otherwise—to prevent them from exercising that right. Though not expressly taking away their right to vote, they made it difficult for Black voters by enacting certain clauses or conditions that turned them away from the polls. Literacy tests, poll taxes, and the so-called “grandfather clause”—which only allowed you to vote if your grandfather had voted (an impossibility for those who were descended from slaves)—are all examples of the discriminatory practices that kept African Americans away from the ballot box. These practices were especially prevalent in the South. As a result, in search of a better life and more equal treatment, many Black Americans migrated to the North between 1915 and 1920.

Jacob Lawrence created this print to submit as part of a portfolio of art commissioned in celebration of the American Bicentennial. Artists were asked to respond to the question, “What does independence mean to you?” Of his own contribution, Lawrence said, “Among the many advantages the migrants found in the north was the freedom to vote. In my print, migrants are represented exercising that freedom.”

From The Civil Rights Movement To Today 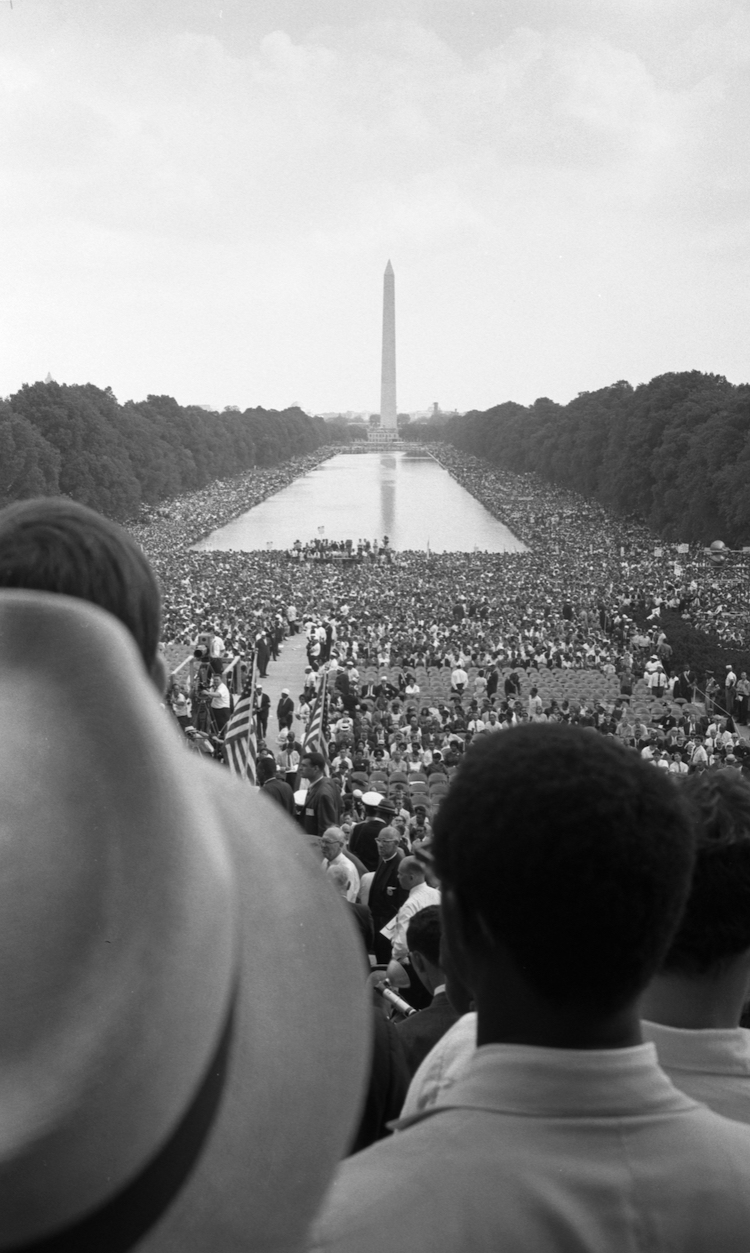 It seems almost unreal that the events of the Civil Rights Movement were taking place only 60 or 70 years ago. Or perhaps it isn’t so unbelievable when confronted with the reflection of such events in the racially charged violence, division, and protests that have taken place in recent years, especially in 2020. Though there may still be a long way to go in ensuring equality for all people in every aspect of public life—no matter their ethnicity, gender, age, or sexuality—the U.S. has come quite a long way from the days of Jim Crow laws and segregation.

Thanks to trailblazers who have paved the way and fought for change in the U.S., equal voting rights are now legally ensured and segregation has ended. Even greater, the country welcomed two people of color into the highest offices of government—one as the President and the other as Vice President—within the last 12 years. And though there are injustices that still occur, contemporary movements like Black Lives Matter have sought to call them out and unite people for change. While there is still much to overcome as a country and a people, the U.S. is continually changing, evolving, and growing. Hopefully, it is always for the better.