Vice President Kamala Harris made history yesterday when she became the first female, first Black, and first Asian American person to ever be sworn into the office. Supreme Court Justice Sonia Sotomayor—the first Hispanic and Latina member of the Supreme Court—was chosen to administer the oath of office to Harris, who has broken many barriers during her own political career. The new Vice President has become a symbol of hope and unity for many people throughout the country and around the world—especially women and people of color. And as she stepped into this pivotal role, she made several strides to mark the importance of this occasion—not just for herself but also for those watching and supporting her and in honor of those who paved the way before her.

“I am here because of the women who came before me,” Harris tweeted on Wednesday morning, before the inauguration. She accompanied this powerful statement with a heartfelt video clip including audio from her acceptance speech in November, after the results of the election were announced, where she remembered her mother and the millions of other women who made this moment possible.

During the inauguration, Vice President Harris—along with former First Ladies Michelle Obama and Hillary Clinton—wore purple, and many have attributed their bold fashion choices to an intent to send a message of unity and bipartisanship. This is a fitting theory, as purple is the resulting color when you mix the red of the Republican Party and the blue of the Democratic Party together.

However, purple has also born symbolic meaning for Harris in the past. She frequently wore the color along the campaign trail during 2019, which she noted was in honor of Shirley Chisholm—the first black woman in Congress and the first Black person to run for president as part of a major party—who often wore purple and also used it as one of her campaign colors. The hue was also adopted by the suffragettes in the early 1900s, who stated: “Purple is the color of loyalty, constancy to purpose, unswerving steadfastness to a cause.”

The new Vice President was also wearing her signature pearls, this time sporting a strand made especially for that momentous day. She has worn pearls for important moments throughout her career, and they are symbolic of the historic Black sorority she joined during her time at Howard University—Alpha Kappa Alpha. Surely, they hold deep personal significance and a sense of tradition for her as well.

Though Harris’ signature Converse were missing from her ensemble, women and girls across the country and around the world donned Converse and pearls in support and honor of the new Vice President as she begins her term in the White House. Last month, Hope Aloaye—a supporter from Florida—started a Facebook group called “Wear Pearls on January 20, 2021” to encourage people to show their support for Harris by wearing pearls on Inauguration Day. The group gained more than 446,000 members in the time leading up to the special day.

As the highest-ranking female official in any U.S. office, Vice President Harris is making history in more ways than one. This surely won’t be the last historic occasion we celebrate during her term in the White House with President Biden. There are many more “firsts” to come.

Vice President Kamala Harris is making history as the first female, Black, and Asian American person to hold the office! 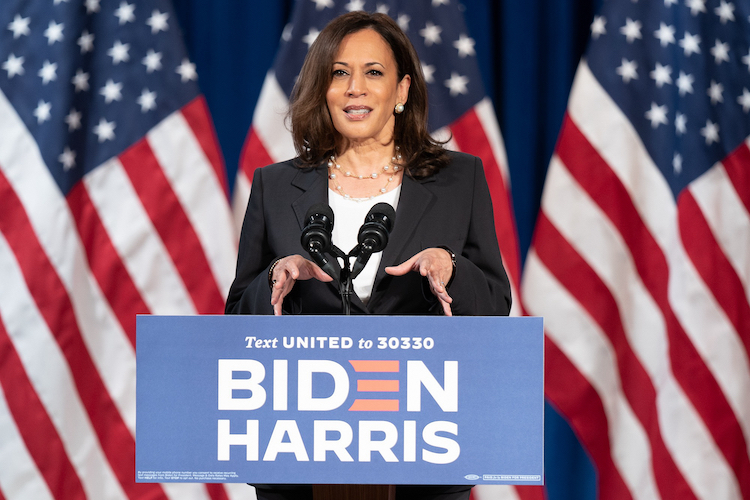 And she may be the first, but she will not be the last.

I’m here today because of the women who came before me. pic.twitter.com/ctB9qGJqqp