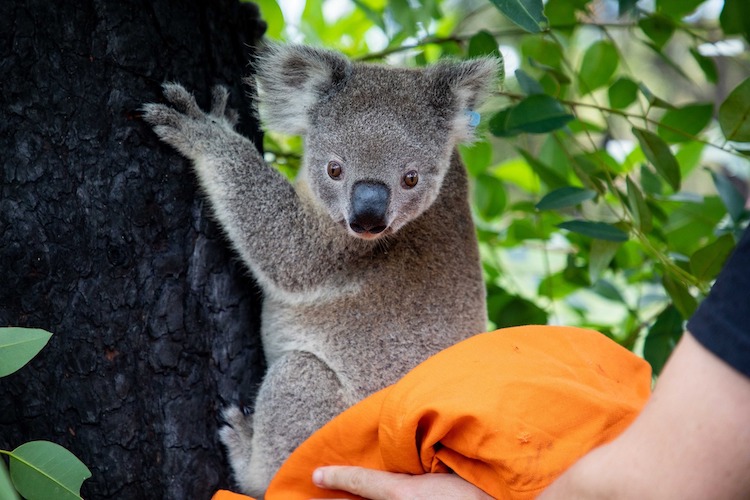 In March, when Australia announced  that its bushfires were over after 240 intense days, the world rejoiced. Now, the hard work of rebuilding begins. And this not only means rebuilding for the people who lost their homes, but also for the innumerable animals that were injured in the fires. Veterinary hospitals across Australia were inundated with animals during the crisis and, now, their first patients are well enough to return to the wild.

This includes Anwen, a female koala who was the first patient admitted to the Port Macquarie Koala Hospital. Anwen arrived at the hospital in October 2019 and, after 5 months of specialized care, was finally released back into the wild. She is one of 49 koalas who spent time at the Koala Hospital. Now she, along with several others, are going home.

“This was an incredibly emotional moment for the vets, volunteers, and koalas, as these heart-melting pics show,” wrote the Greater Port Macquarie Facebook page.  “Their habitat is recovering beautifully with the recent rain and there is plenty of food and water. What a journey!”

Anwen, who was covered in burns and suffered from a Chlamydia infection when she arrived, is a symbol of hope for her species. It's estimated that nearly 30% of the koala habitat in New South Wales was destroyed and around 2,000 koalas perished in the fires. The situation is so dire that it has caused some experts to call the species functionally extinct. However, with Anwen returning to her home at the Lake Innes Nature Reserve there is great hope that the remaining members of the species will be able to thrive under these new conditions.

“Anwen was our first-ever female koala to be admitted during the bushfires and her recovery has been extraordinary,” said Sue Ashton, president of the Koala Hospital. “It marks a proud moment for Australia; to see our Koala population and habitat starting to recover from what was such a devastating time. To be able to release so many of our koalas back to their original habitats, even to their original tree in some cases—makes us very happy.”

Watch as Anwen the koala is returned to her home after spending 5 months in the hospital.