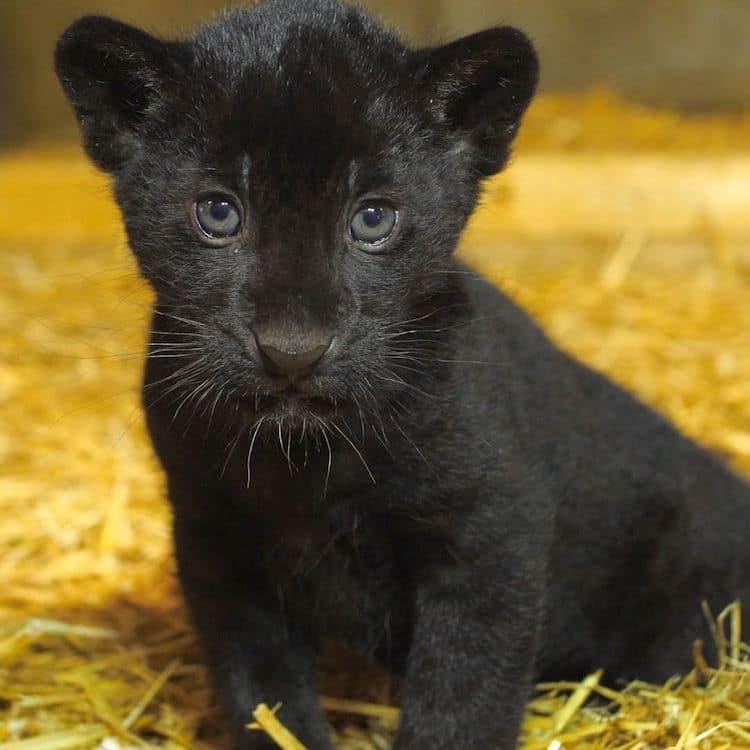 Just 10% of jaguars are black in the wild. This is why the newest addition to The Big Cat Sanctuary in Kent, England, has made waves. It recently welcomed a rare black jaguar cub to its family of big cats! The adorable female cub was born on April 6, and “she’s growing bigger, stronger, and more mischievous by the day.” Her birth is part of the European Endangered Species Breeding Programme, and marks and important moment for the “near threatened” jaguar species.

Currently known as “Baby” until her name is decided, the 10-week-old cub is the fourth black jaguar currently residing at the sanctuary. Her parents are Neron and Keira, two majestic jaguars who first met in December 2019, when they were introduced to share an enclosure. Neron is a melanistic jaguar, meaning he has high amounts of dark pigmentation in his coat due to an ancestral genetic mutation. The kingly cat managed to pass on his rare genes to his daughter, who looks just like a baby panther. However, her spots show as black and brown in the sunlight.

When Neron and Keira were introduced, they hit it off right away. “Keira is our most energetic and lively cat. She is a big bundle of energy which contrasts Neron who is an incredibly laid back and calm cat,” says The Big Cat Sanctuary. “You can really see when they interact with one another just how in love they are. Opposites do attract!” It wasn’t long before Keira was pregnant; and since giving birth, she’s been the best mom. “Keira is a loving, patient, and wonderful mother,” the sanctuary tells My Modern Met. “Her maternal instincts shine through as she feeds, grooms, and plays with her beautiful daughter all hours of the day and night.”

Baby will stay indoors by her mom’s side until she gets her vaccinations at around 14 weeks. But like all moms, Keira needs a break every now and then. That’s when the Keeping Team “baby-sit” and carry out the necessary health checks and familiarization time. The cute cub is the picture of health, and she’s even surprising the staff at the sanctuary with how strong she is. Head Keeper Briony reveals, “Our gorgeous little girl was born at 11:10 a.m. and has gone from strength to strength since.” She adds, “I cannot believe how quickly she is developing compared to other big cat cubs and this seems to be normal for jaguars. She was born with her eyes open and walking strongly by 2 weeks old. Now she is tearing around the dens and certainly making sure that Keira has her hands full.”

Neron is yet to be introduced to his daughter due to safety reasons, but they have seen each other from a distance. “Neron is enjoying some peaceful time either on top of his climbing platform or hiding inside his tunnel,” says the sanctuary. “We are excited for the day he gets to meet his new daughter in the future!”

The sanctuary is currently running a competition to decide on the cub’s new name. From now until August 1, you can vote on which name is your favorite: Inka, after the South American Indian people; Inti, a Quechuan word meaning “Sunshine;” or Killari, a Quechuan word meaning “Moonlight.” Each vote costs £5 (around $7), and 25% of the funds raised will be donated to the sanctuary’s jaguar conservation partners working from the University of Costa Rica.

Scroll down to check out the adorable photos and videos of Baby. If you’ve fallen in love with this jaguar family, you can “adopt” Kiera and her new cub to help fund their care. Find out more here.

Meet Baby, a rare female black jaguar cub that was born on April 6 at The Big Cat Sanctuary in Kent. 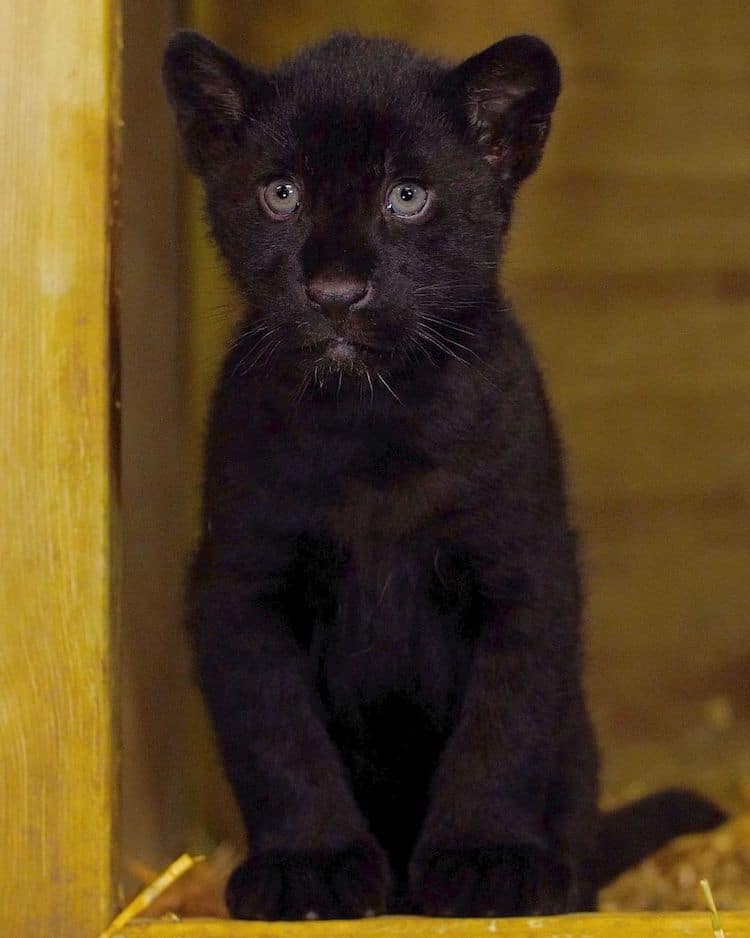 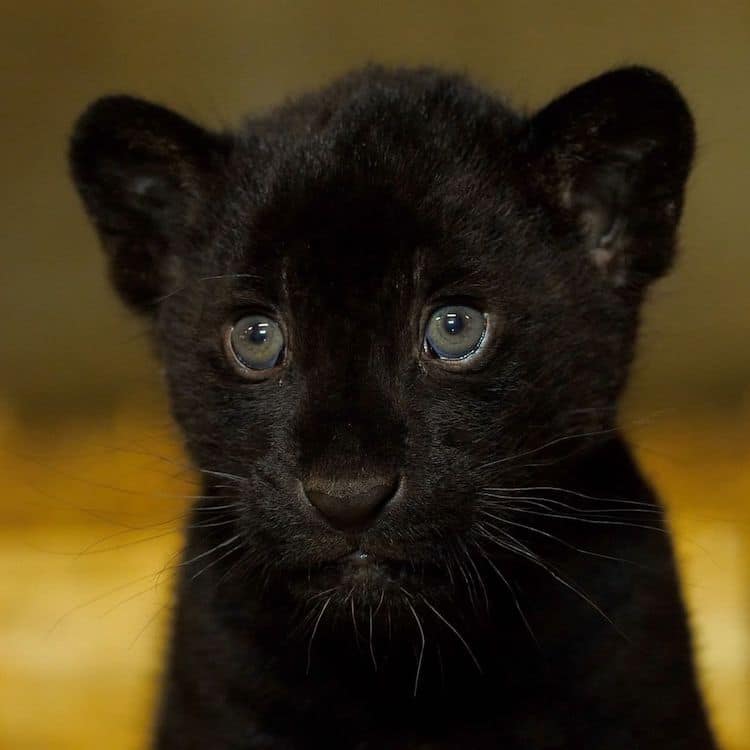 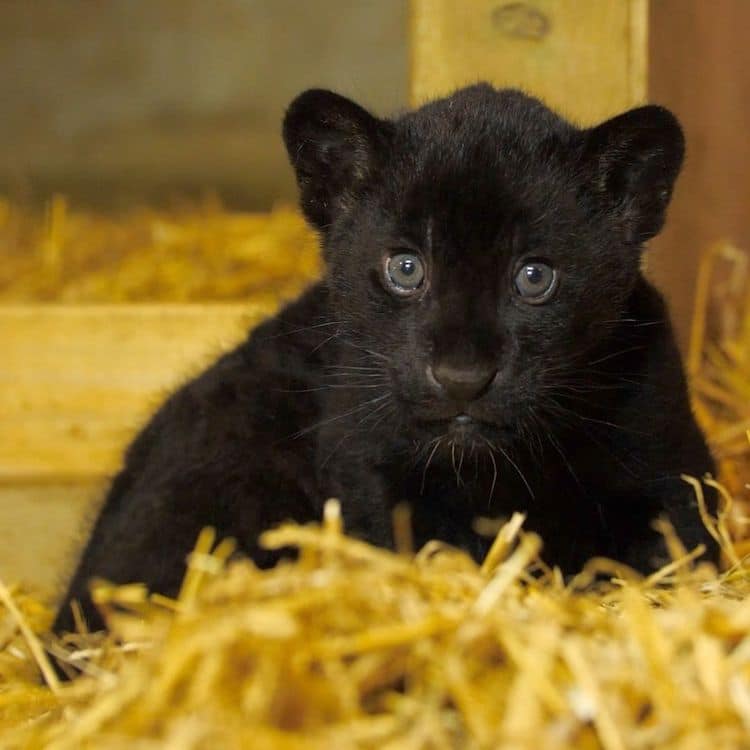 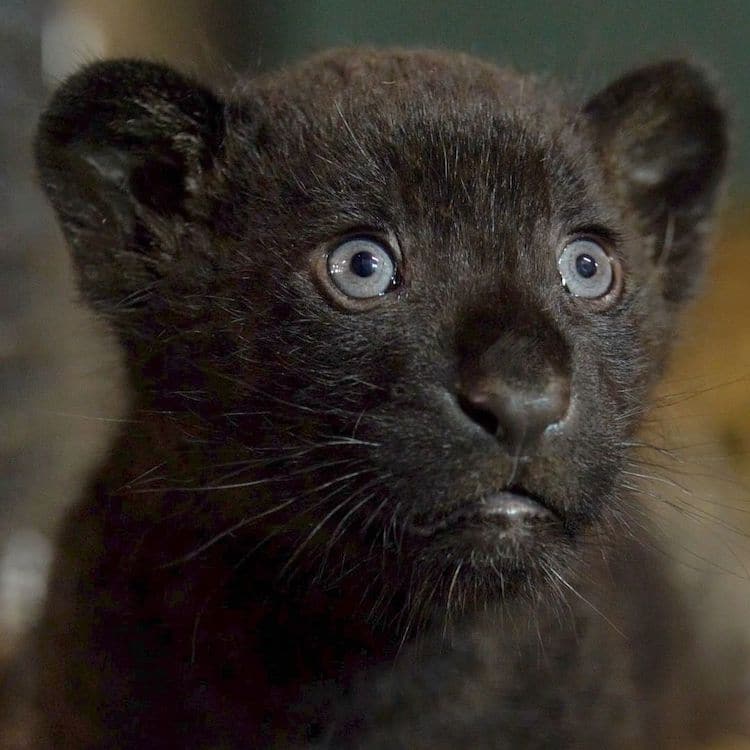 Keira, Baby's mother, was born at the Paradise Wildlife Park in 2017, before coming to the Big Cat Sanctuary in 2019. 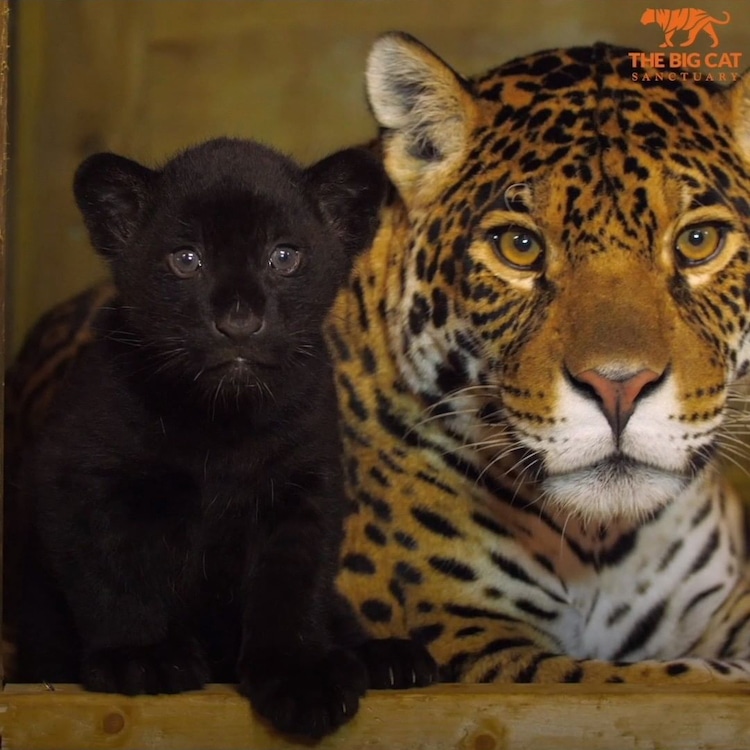 She was paired with Neron, a majestic jaguar who also has dark coloration. 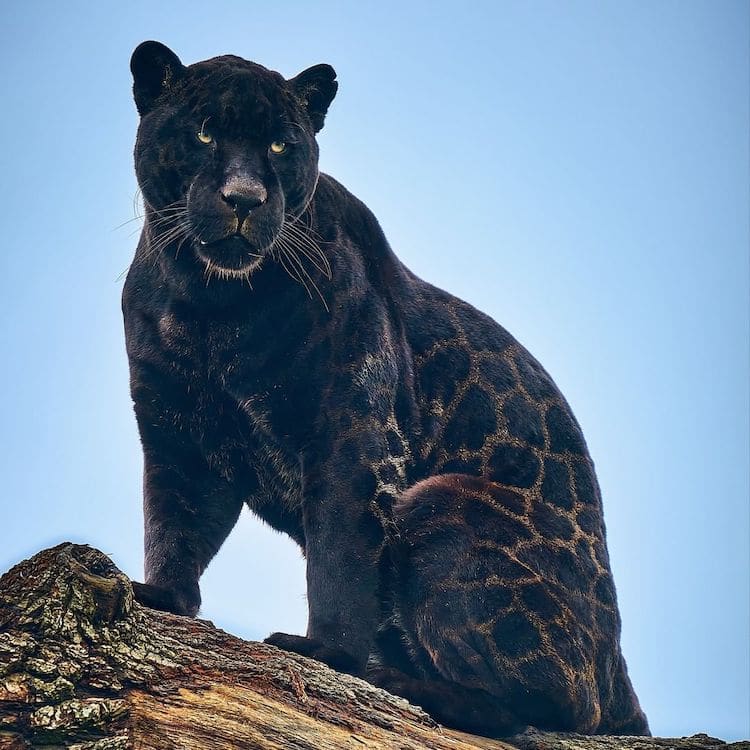 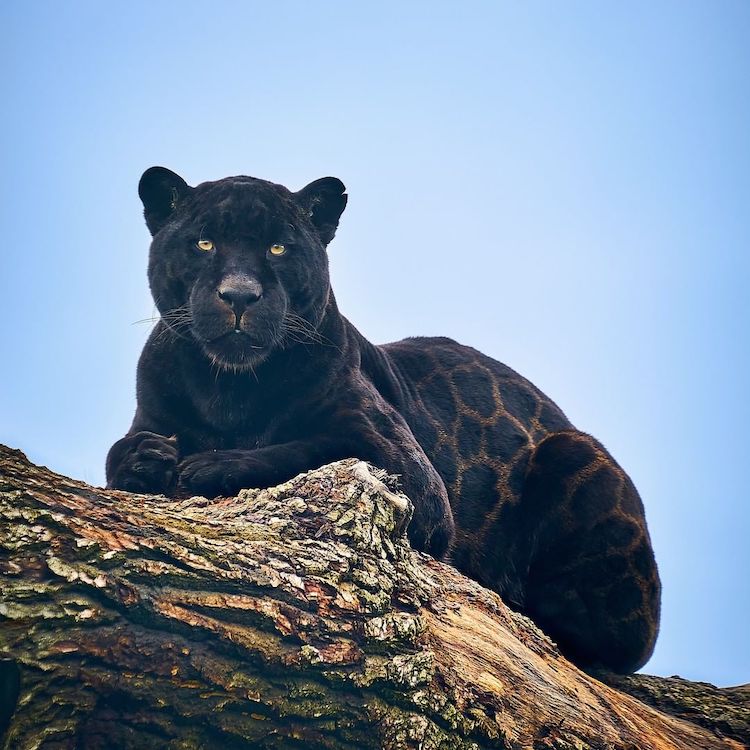 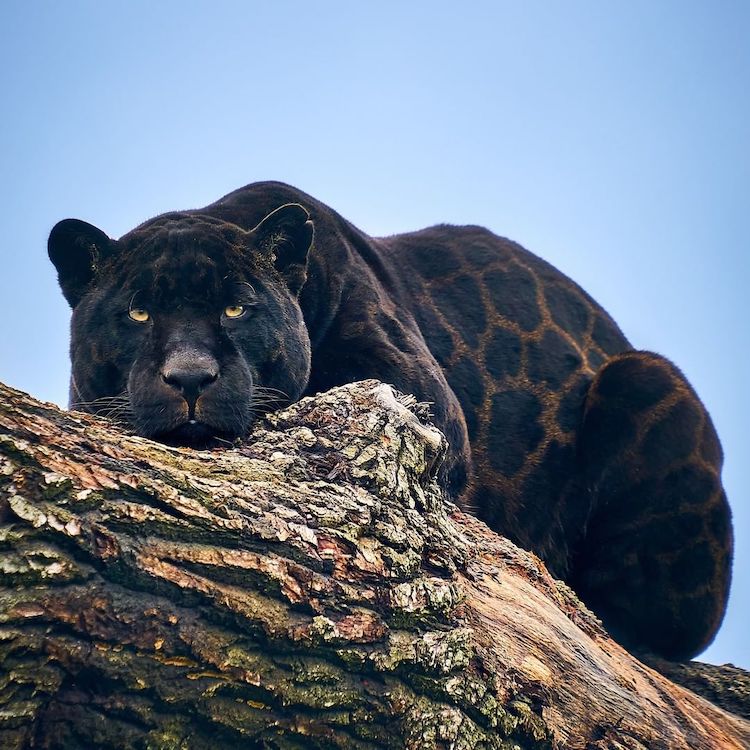 The pair instantly hit it off, and it wasn't long before their cub was born. 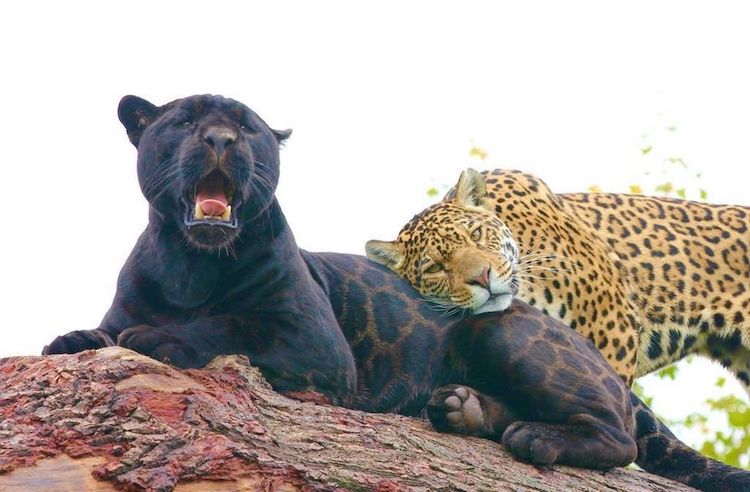 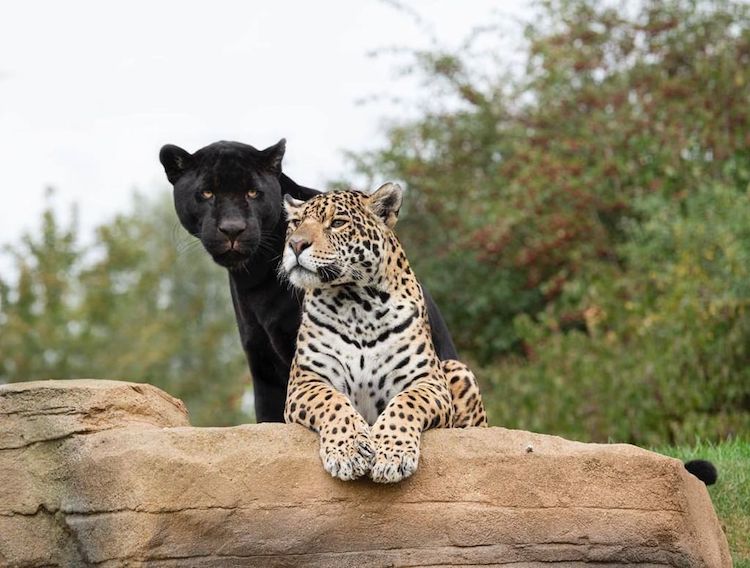 Baby is strong, healthy, and a little feisty!

My Modern Met granted permission to feature photos by The Big Cat Sanctuary.