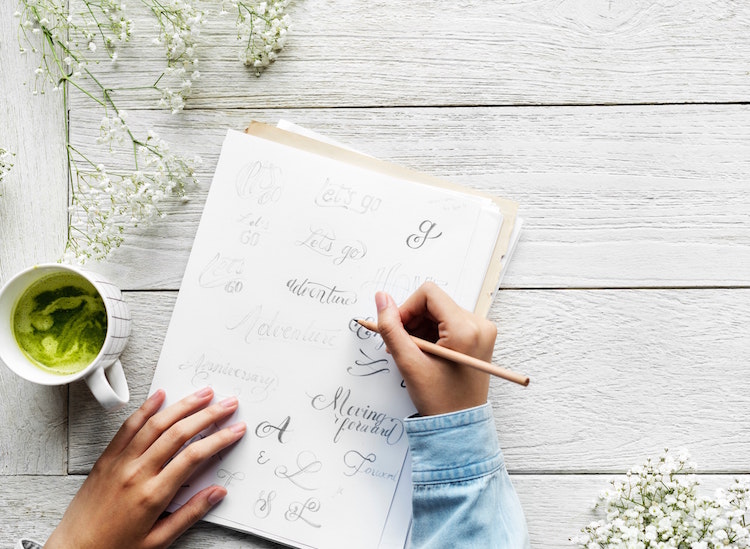 Many of today's finest artists practice age-old crafts like calligraphy and hand-lettering. Some historians have traced the beginnings of calligraphy to China, where the written word was rendered using bamboo brushes and papyrus paper. However, calligraphy also has deep historical roots in many different regions around the world. In Europe for example, calligraphy appeared as Latin script, painted onto Roman walls around 600 B.C.E. and was later refined for use in religious texts. Today, the ancient art form is still as popular as ever, with many artists rendering handwriting in beautiful flourishes of ink.

While calligraphy is defined as “the art of producing decorative handwriting or lettering with a pen or brush,” hand-lettering is actually an entirely different art form and involves drawing letters as opposed to writing them. Calligraphy artists typically use dip pens with nibs and ink to create thick and thin lines using varying degrees of pressure, all in a single stroke. However, contemporary hand-letterers use a variety of tools and techniques to create illustrative letters, which often aim to evoke emotions and bring conceptual meaning to words.

In this list, we’ve included both calligraphy and hand-lettering artists who prove that text doesn’t always have to be so “black and white.” From those who value the traditional, pretty handwriting of calligraphy to artists who take unique approaches in designing their own unique letter forms, these artists are masters of creating art with words.

Want to create your own beautiful letters? Check out everything you need to learn about the ancient art of calligraphy.

When he’s not creating decorative type with a pencil or pen, inventive lettering artist Ian Barnard sometimes uses vegetables as unconventional tools. So far, he’s injected a broad bean, chili pepper, and even a courgette with ink to draw surprisingly beautiful “vegetable calligraphy.” The artist says, “Who knew that some broad beans would make such a great monoline marker.”

Dutch artist Lizemijn Libgott (aka Lili Lettering) uses a dip pen and her own custom ink to create dazzling glitter calligraphy. In her mesmerizing close-up videos, viewers can watch as the wet holographic ink shimmers as it’s drawn in elegant letter shapes. You can even hear the sound of the pen scraping against the paper’s surface.