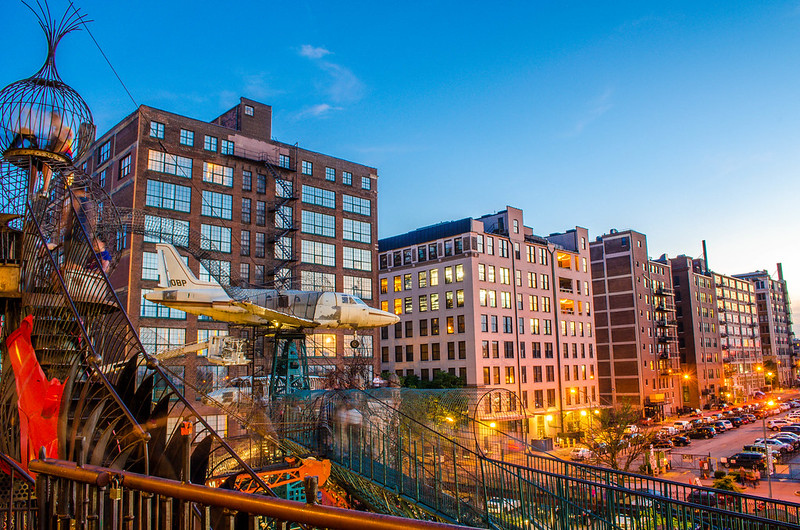 While there’s many amazing contemporary art museums around the world, St. Louis celebrates creativity at a whole new level. After all, it’s the home of City Museum—a surreal, ever-changing urban playground made from found objects. Housed in a 600,000-square-foot former International Shoe Company factory, the museum was opened in 1997 by sculptor Bob Cassilly. Since he passed away in 2011, the DIY fun house is now run by a group of 20 artists aptly known as the Cassilly Crew.

Once you step inside the museum grounds, it’s like entering the mind of an artist who never lost their childlike sense of wonder and imagination. Everything is handmade, using a jumble of weird and wonderful objects that have been donated by the people of St. Louis and beyond. The space is constantly growing and changing, depending on what the
Cassilly Crew can get their hands on. The museum’s director Rick Erwin says, “If you have something cool you want to give us, I’m not going to say no just because it’s not from St. Louis. Cool stuff is cool stuff.”

Visitors young and old can enjoy exploring the museum’s winding tunnels, secret passageways, and sky-high jungle gyms. When the space was used as a shoe factory, workers would send shoes through chutes, which Cassilly then converted into multi-story spiral slides that drop visitors into the museum’s underground caves. The fun doesn’t stop there—you’ll also find a fully functioning rooftop Ferris wheel, an aquarium, a ball pit, a giant indoor treehouse, contemporary sculptures, and even an old-fashioned shoelace-making facility. There’s also an old school bus—donated by the Roxana School District—that sits overhanging on the roof. “You can actually make it bounce,” Erwin says. “It's on hydraulics. We spent a lot of money proving that it's safe.”

This museum is not for the faint of heart, though. The outside sign reads: “The City Museum is full of creativity, adventure, and learning … and is fraught with DANGER. Enter at your own risk!”

Here are just some of the many whimsical things you’ll find at the City Museum, St. Louis.