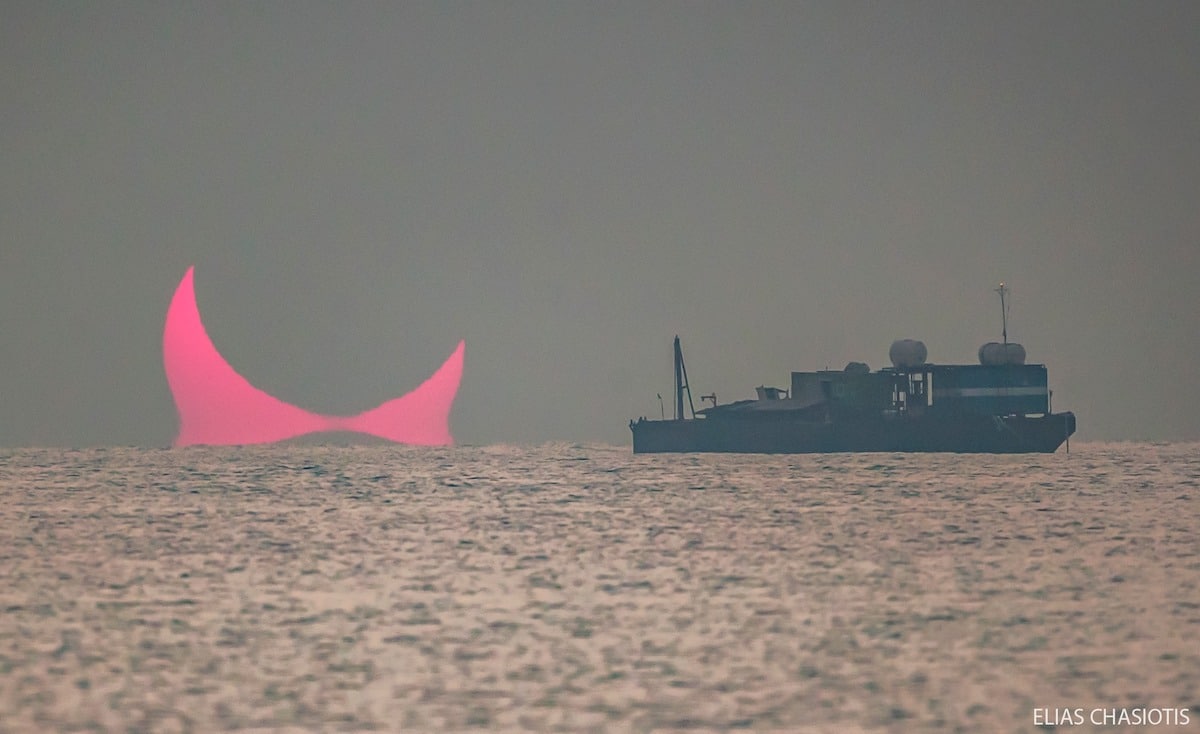 Since he was a child, the sky has been a source of fascination for amateur astronomer Elias Chasiotis. Particularly drawn to eclipses, he recently made the journey to Qatar in order to take in the annular solar eclipse. While clouds made the eclipse difficult to photograph, Chasiotis was rewarded with something even more spectacular. As the sun rose over the waters, the eclipse was already in effect, making for a rare optical illusion.

“The dark circle near the top of the atmospherically-reddened Sun is the Moon—but so is the dark peak just below it,” explains NASA's Astronomy Picture of the Day. “This is because along the way, the Earth's atmosphere had an inversion layer of unusually warm air which acted like a gigantic lens and created a second image.”

Chasiotis' positioning was no accident. He purposely placed himself in Al Wakrah because he knew that the eclipse would begin at sunrise and he was hoping that the position over the water would cause a mirage. This particular atmospheric optical phenomenon—when occurring during a normal sunrise—is called the Etruscan Vase effect. Great science fiction writer Jules Verne actually named the optical illusion after the shape that it makes.

For Chasiotis, while he was disappointed not to be able to see the full annular solar eclipse—where the moon covers the sun completely, leaving only a ring of fire visible—he's more than satisfied by what he captured that day. “The feeling during the eclipse was out of this world,” he shares with My Modern Met. “The crescent sun rose in a deep red color that reminded me of burning coal. At first, two horns were visible rising from the sea, which soon took the shape of a crescent. The distortions visible made it look even more idyllic! An annular eclipse followed, which is called ‘the ring of fire,' because the moon is not close enough to the Earth to block all of the sun. Unfortunately, clouds blocked my view and I missed the annular phase. When the eclipsed sun reappeared through the clouds it was a crescent again. Despite missing the main event, I was so rewarded by the sunrise itself that I didn't feel sorry at all.”

Chasiotis will have another chance at viewing an annular solar eclipse on June 21, 2020, which should be visible through parts of Africa, Pakistan, northern India, and China.

During the partial annular solar eclipse in December 2019, an incredible mirage occurred during sunrise. 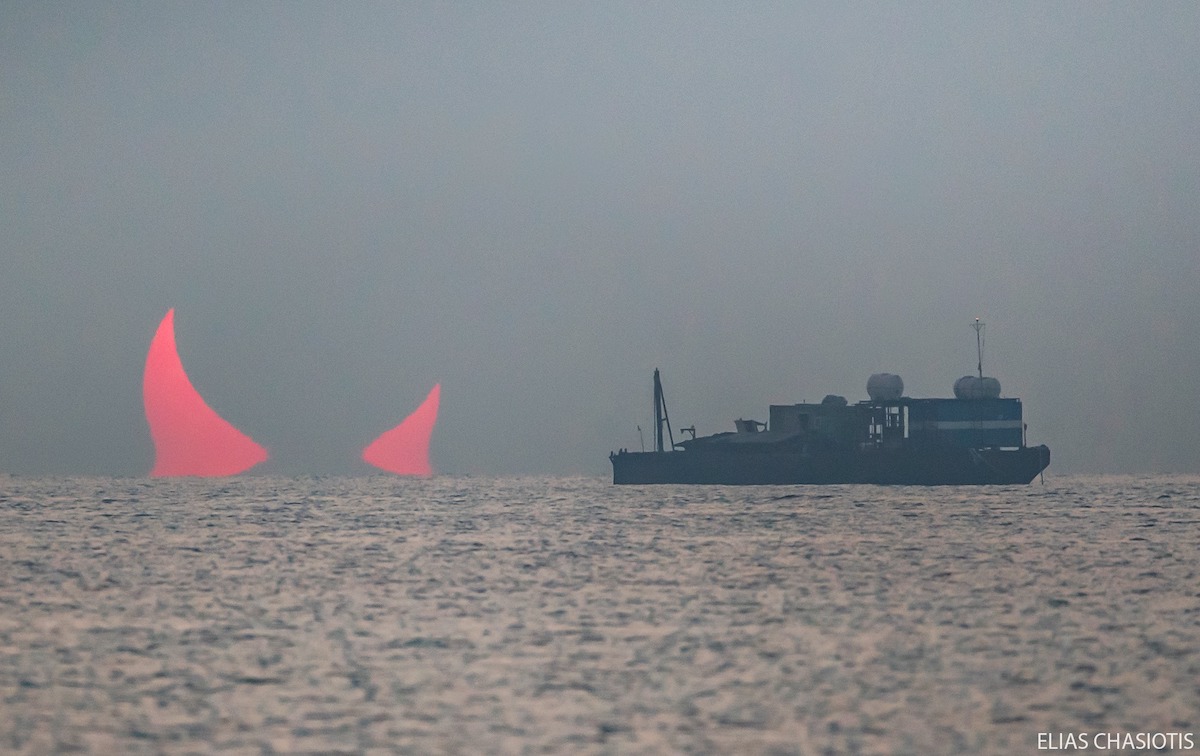 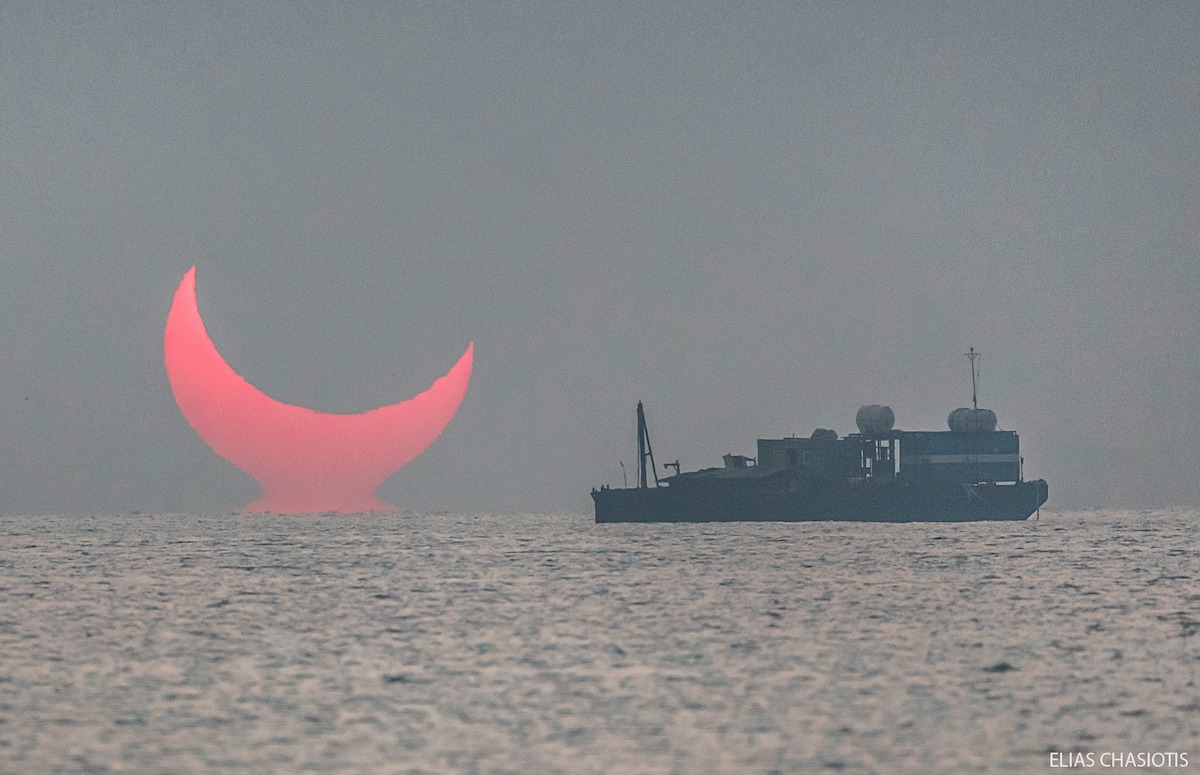 Amateur astronomer Elias Chasiotis was there to capture it as the mirage faded and the sun rose as a partially, covered crescent. 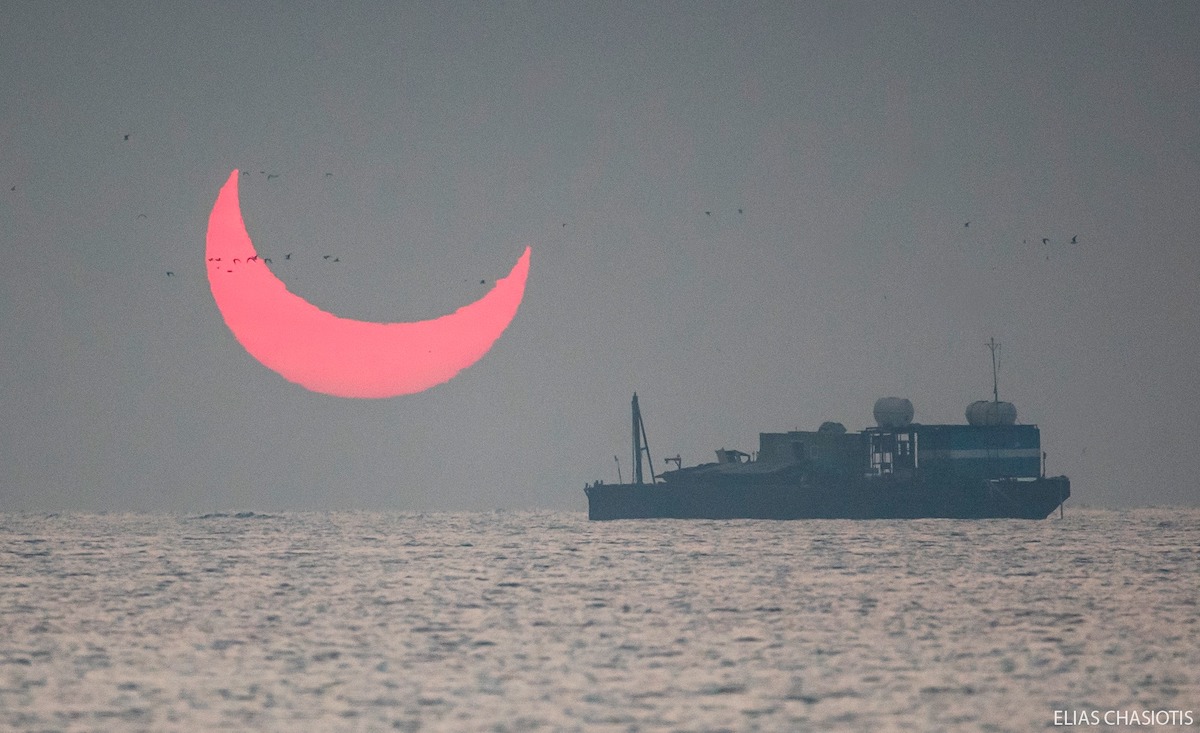 In awe of the sky? Share
Like My Modern Met on Facebook
Get Our Weekly Newsletter
Become a
My Modern Met Member
As a member, you'll join us in our effort to support the arts.
Become a Member
Explore member benefits