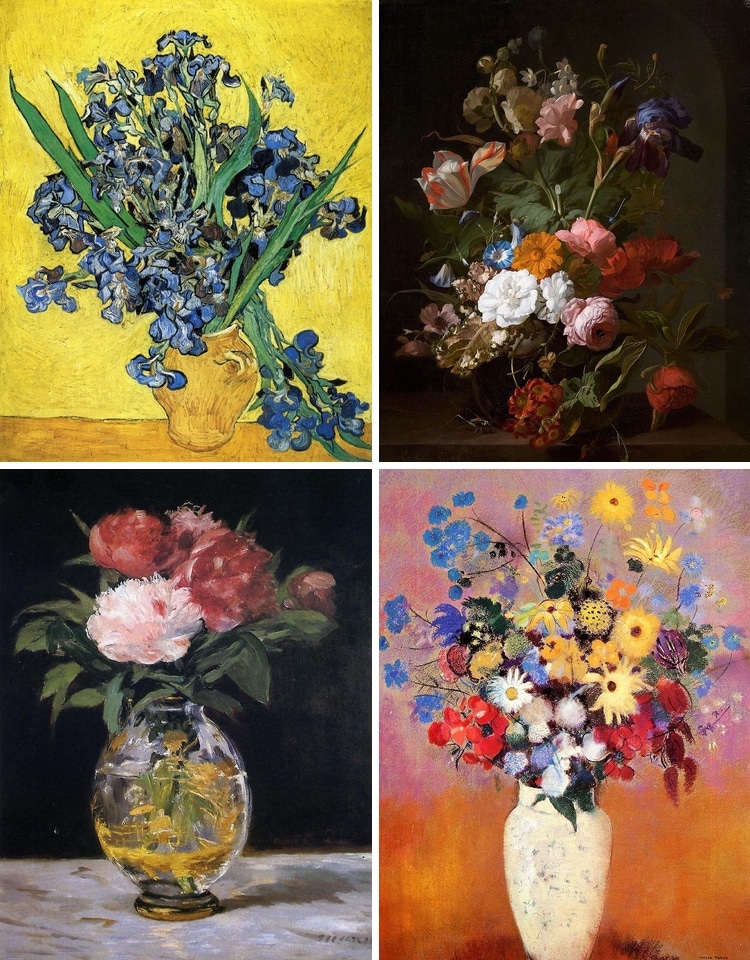 Throughout art history, flowers have been one of the most beloved subjects for painters. The vibrant blossoms of flowers have long provided artists with inspiration, with many dedicating their careers to produce still-life paintings of various botanical beauties. From 17th-century Dutch still-life paintings to Japanese woodblock prints, flower art has a long and storied history.

Whether painting roses, irises, or peonies in a vase or painting them straight from nature, each artist brings their own unique style to the finished artwork. In fact, just by examining paintings of flowers over time, one can trace the progression of art history. And even if the history of art isn’t something you’re particularly interested in, there’s no denying that there’s a powerful quality to floral paintings, no matter what era it’s from. There’s a timeless sense of joy, hope, or even moroseness that paintings of flowers can evoke. There’s a reason why some paintings of nothing more than flowers have resonated for decades, if not centuries.

These famous flower paintings are reminders of how much nature has to offer and that some of the best inspiration comes from what you can find at your front door. Each painting encapsulates a moment in time, both in the history of art and in the life of the artist who painted it. Take a look at some of the most memorable paintings of flowers created over the last 500 years and you may just be inspired to begin drawing your own flowers. 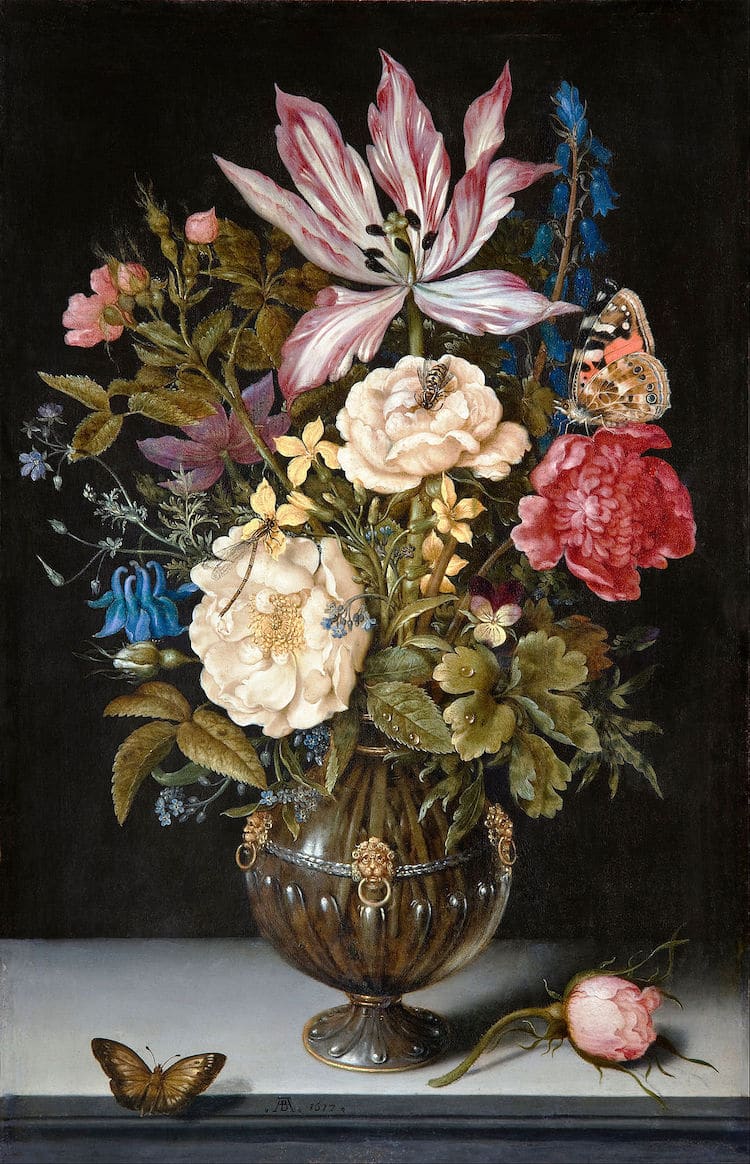 Believe it or not, still-life painting was once considered a lesser form of art, as the elite favored religious and historical paintings. This slowly began to change through the 16th and 17th centuries, with the Dutch leading the way. The city of Antwerp was particularly important, as artists here began painting monumental size still-life paintings, which often featured flowers. Ambrosius Bosschaert was a Dutch still-life artist known for his love of painting bouquets of flowers with near scientific accuracy. A love for flowers ran so deep in his family that all three of his sons later became flower painters. Bosschaert’s flower paintings show symmetrically displayed blooms and he was one of the first painters to focus on painting bouquets. Clearly, his work sparked a trend that has lasted throughout art history.

Flowers in a Glass Vase, with a Cricket in a Niche by Rachel Ruysch (1700) 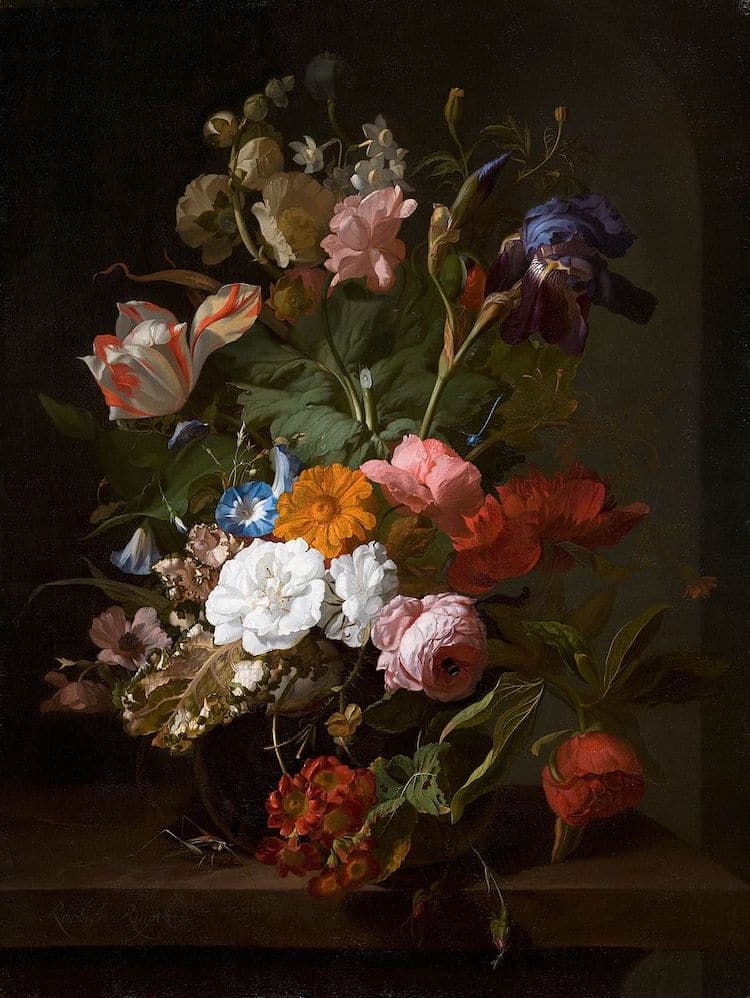 Rachel Ruysch not only has the distinction of being the most well-known female artist of the Dutch Golden Age, but she also elevated flower painting to another level. She was able to invent her own style and enjoyed a 60-year career painting botanical imagery. She broke from tradition and created asymmetrical compositions with her painted bouquets, which made for more dynamic artwork. At the same time, each petal is painstakingly detailed and her knack for putting together richly colored blossoms helped her stand heads and shoulders above other flower painters of the time. 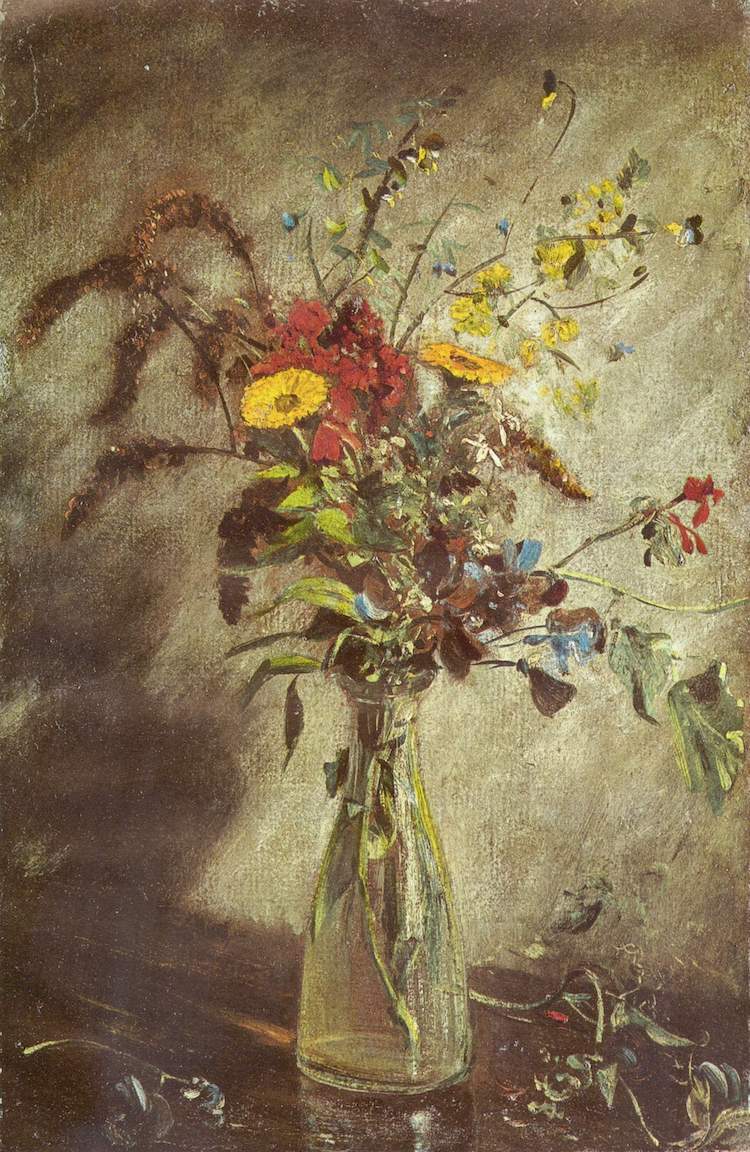 English Romantic painter John Constable is well-known for his landscape paintings, which capture the area close to his home. But by the time Constable was practicing his art, flower painting was a well-ingrained part of the artistic tradition. He, like many famous artists before and after, dabbled in many different genres, including still-life paintings. His Flowers in a Glass Vase is an oil study painted on millboard and now belongs to the Victoria & Albert Museum after Constable’s daughter gifted the museum the contents of his studio. The dark, muted color palette is balanced by pops of red and yellow on the flowers, with Constable creating drama through the contrast of light and dark. 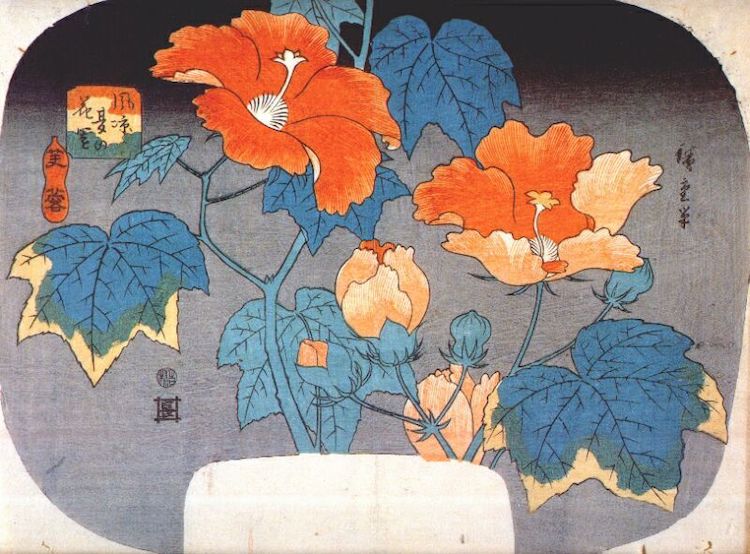 Flowers have historical importance in Japanese culture, whether they are used to create ornate floral arrangements or included in woodblock prints. Ukiyo-e master Hiroshige‘s depiction of hibiscus flowers is a triumph, as their bold orange color leaps from the page. According to the Japanese language of flowers, also known as hanakotoba, the word for hibiscus means “gentle.” These flowers are given as a social custom meant to greet visitors. Hiroshige’s 1845 Hibiscus is one of many times he depicted the flower in his color woodblock prints. Occasionally he included birds interacting with the hibiscus; while, in many cases such as this, he filled the entire composition with the plant.

Bouquet of flowers by Edouard Manet (1882) 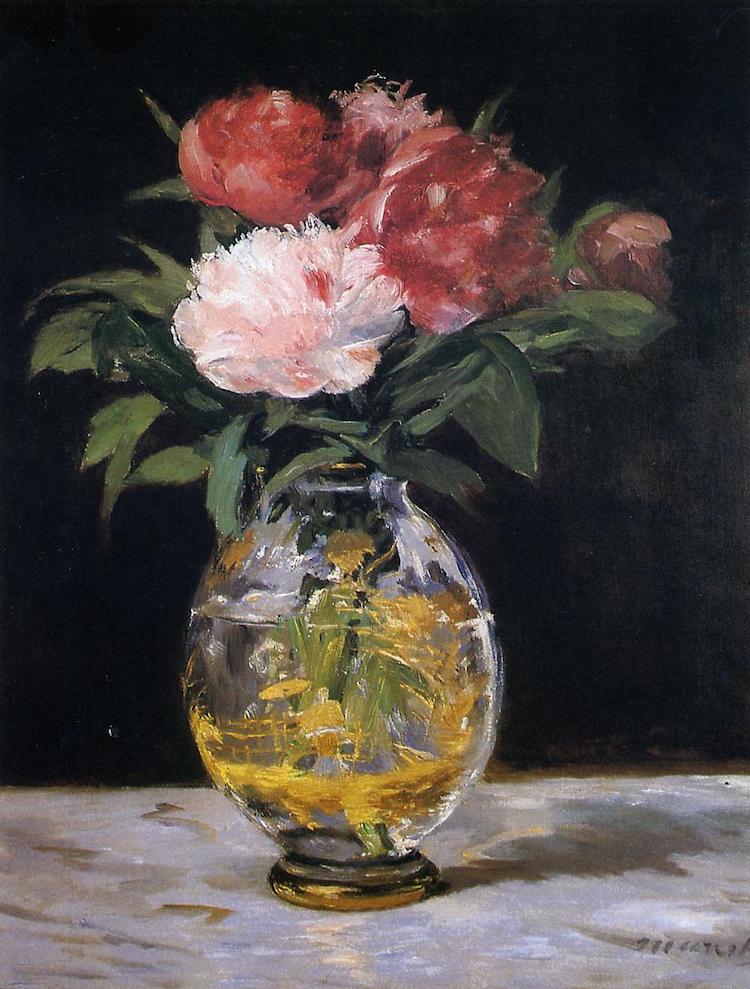 Influential painter Edouard Manet was a lover of flowers, painting them frequently. Breaking with tradition, he not only painted bouquets in vases but also flowers scattered loosely on tables. His free, dynamic brushstrokes that made him a pivotal figure between Realism and Impressionism give his painted flowers a compelling, ephemeral feel. Flower painting was so important to Manet that for the last six months of his life he only painted floral still-lifes.  According to Christie’s, Manet often used these paintings as small gifts for friends.

Roses and Lillies by Henri Fantin-Latour (1888) 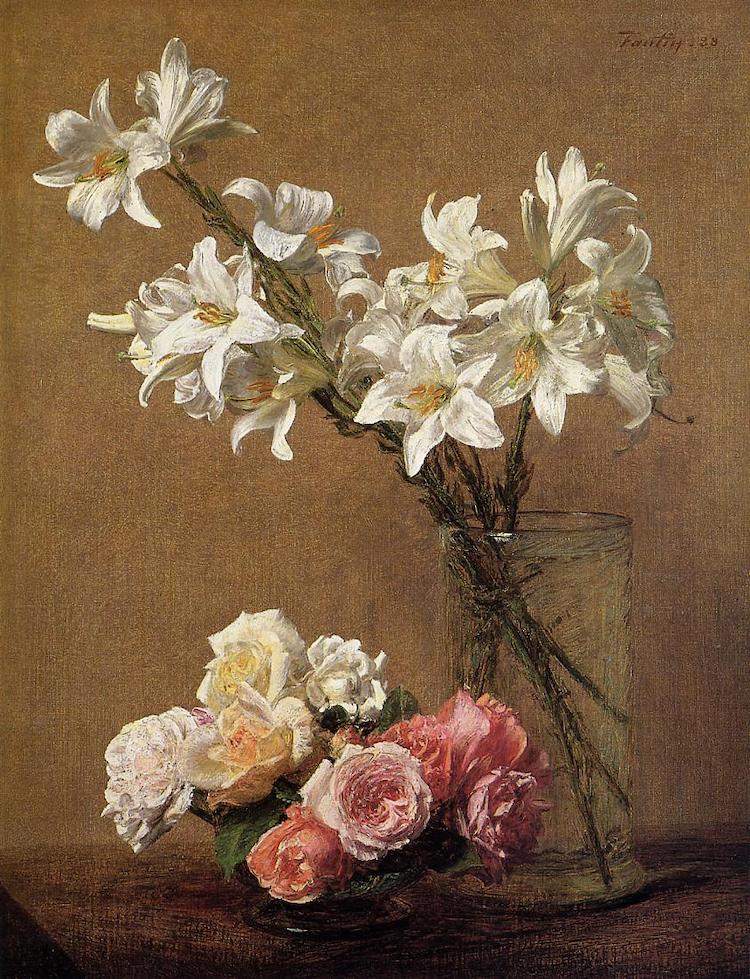 French painter Henri Fantin-Latour specialized in painting flowers, taking a conservative approach to his work in a time where Impressionism was gaining momentum. His Realist paintings show his dedication to the great masters of art, as he refined his craft by copying paintings at the Louvre. With Roses and Lilies, Fantin-Latour used the long stems of the lilies to cut across the canvas, balancing the small pink and white bouquet of roses resting on the table. He also showed off his brilliant use of color, playing up the romanticism of the painting through the blush pink hues of the rose petals, which provide a soft contrast to the deep brown of the wood table. 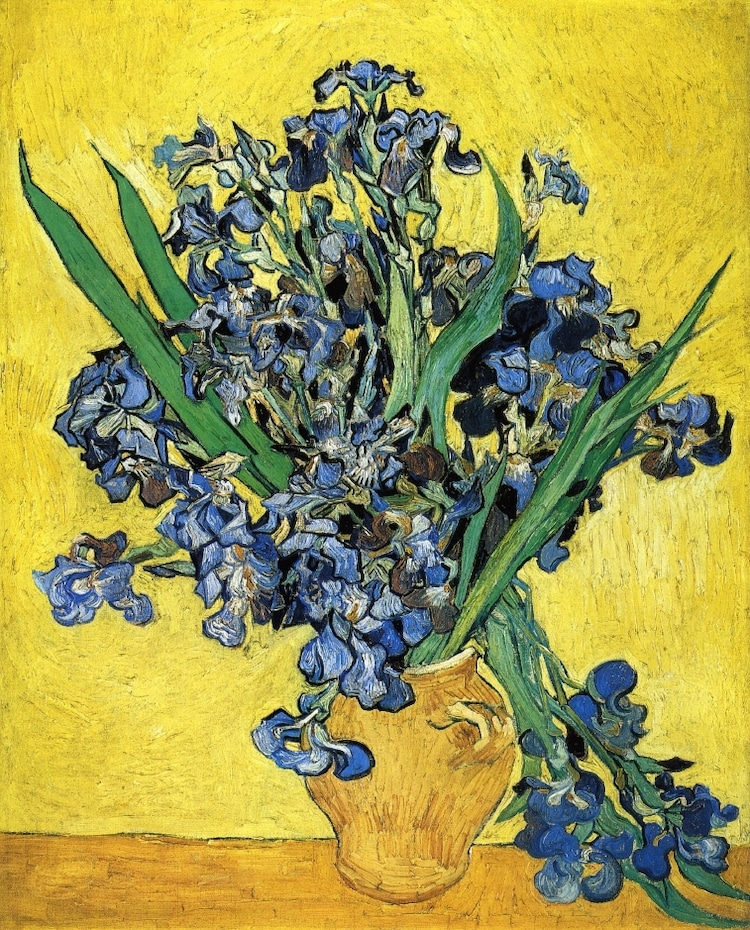 There are many famous flower paintings by Vincent van Gogh to select from, including his famed Sunflowers series. But we’re partial to Still Life with Irises, which highlights the artist’s interesting use of color. Painted while he was a patient at a psychiatric hospital in Saint-Rémy, this still-life is masterful in its use of bold, contrasting colors. The painting is one of two versions. One, which is now in the Metropolitan Museum of Art, was painted against a now-faded pink background meant to create a “soft and harmonious” atmosphere. Instead, Van Gogh had quite different intentions for this version, which he wrote about in a letter to his brother Theo. “The other violet bunch (ranging from carmine to pure Prussian blue) stands out against a startling citron background, with other yellow tones in the vase and the stand on which it rests, so it is an effect of tremendously disparate complementaries, which strengthen each other by their juxtaposition.” 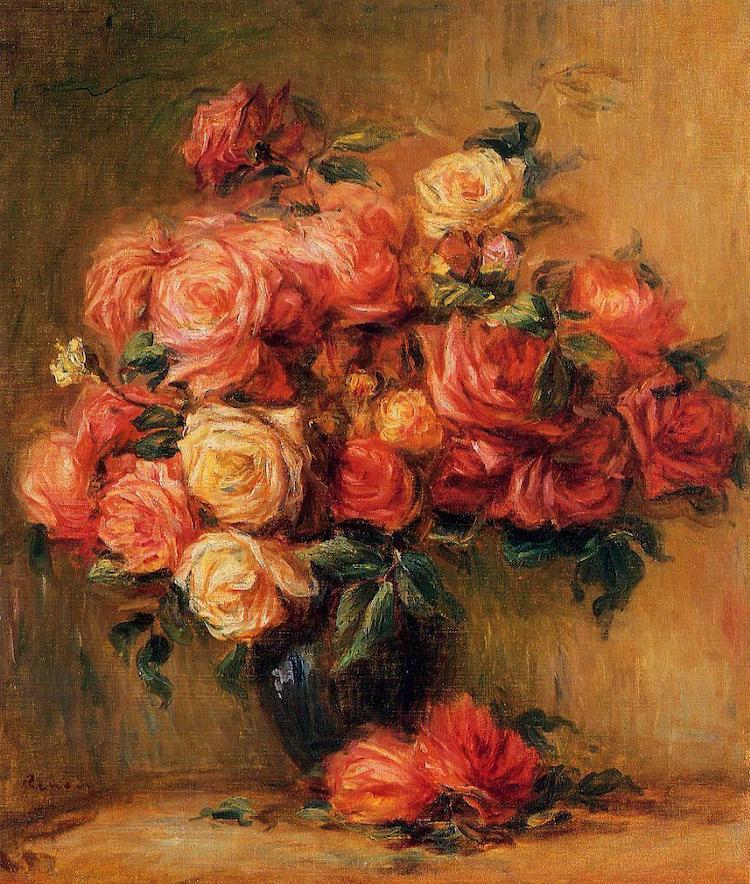 Renoir’s Bouquet of Roses is a sensual oil on canvas work where the Impressionist master fills the frame with lush, plump rosebuds rendered in various vibrant hues of red and pink. Being yet another painter who turned to flower painting later in his career, Renoir frequently painted roses—most often red ones. At this time in his life, Renoir was freer with his art, simply wishing to evoke the feeling of the object rather than focusing on the minute details. This allowed him to create flower paintings that have a tactile quality and energy that radiate from the canvas. 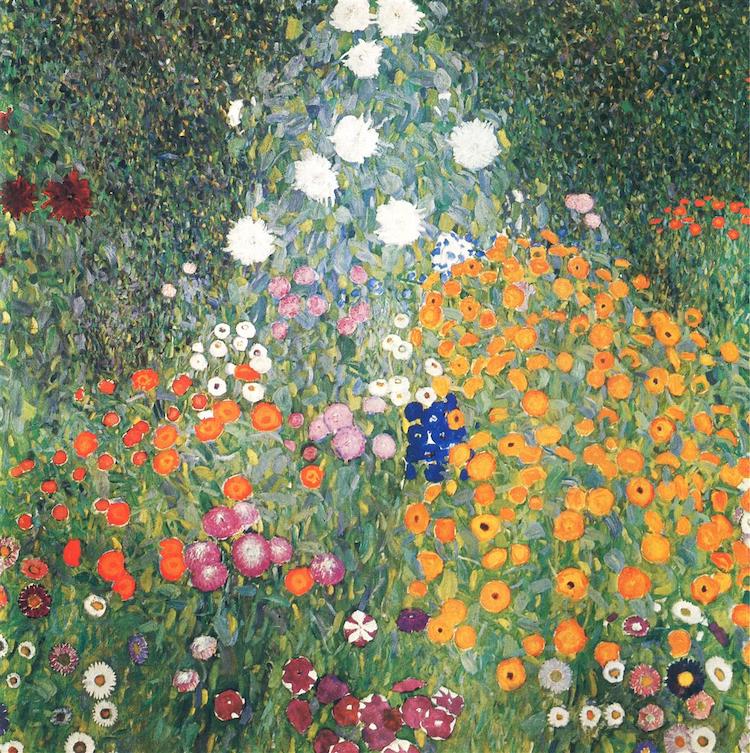 Enchanted by the landscapes he saw while summering in Litzlberg, Gustav Klimt‘s set of paintings depicting fields of flowers are powerful examples of work during his Golden Phase. Flower Garden, or Bauerngarten, is regarded as one of Klimt’s best landscapes and depicts a multitude of flowers tumbling out of the frame. The work, which sold at auction in 2017 for $59.3 million, celebrates the rustic charm of a garden without relying on realism. Sotheby’s auction catalog sums up its fine quality perfectly by stating, “This remarkable landscape is rooted in the natural world yet simultaneously reaches towards the symbolic, decorative avant-garde. It is this synthesis of natural beauty and harmonious regularity which lends the work its profoundly moving quality.” 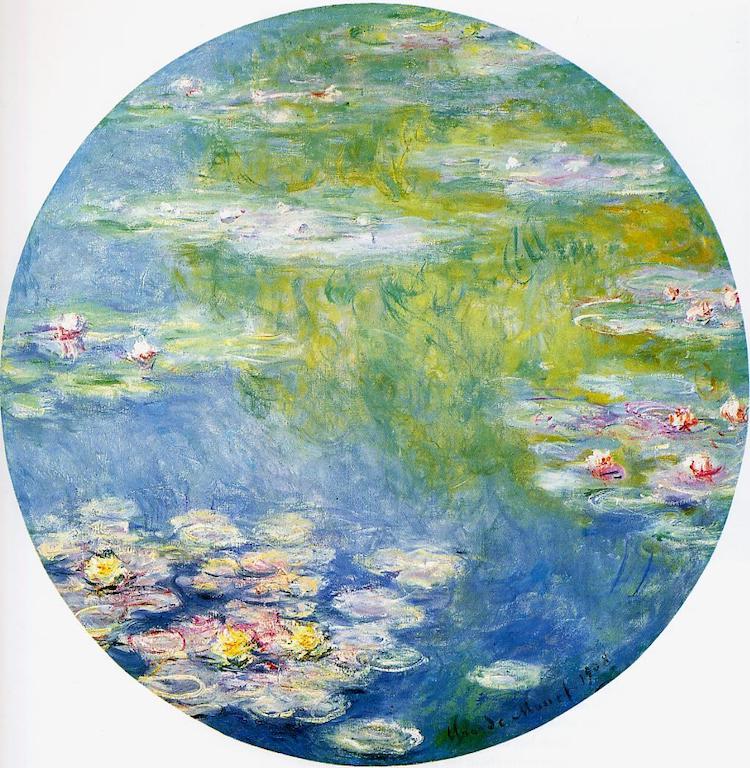 It wouldn’t be a proper list of flower paintings without Claude Monet’s Water Lilies. With this iconic series, the Impressionist genius gives a masterclass in en plein air painting. Monet was so devoted to the series that he ensured his personal garden in Giverny would always be in top form in order to give him the inspiration he needed. Monet painted over 205 pieces for the series over the last 30 years of his life, with his loose brushstrokes often making the compositions border on abstraction. Most importantly, he never lost focus on bringing the spirit of the delicate water lilies to life, rendering them in rich colors and showing their beauty in different types of light. 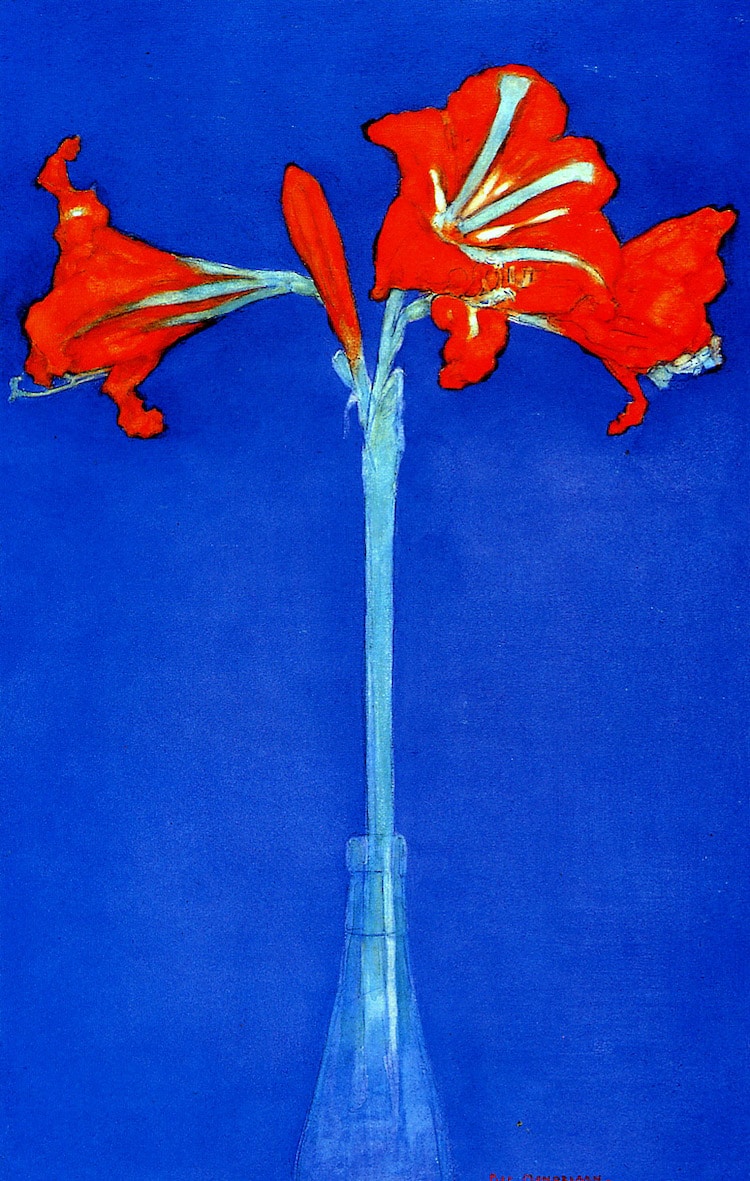 Piet Mondrian, being Dutch, came from a long cultural tradition of flower art. But he wasn’t afraid to bring his own contemporary touch to his still-life painting. This early still life, Amaryllis, comes well before Mondrian’s most well-known abstract paintings, which are rooted in geometry. Painted in a Fauvist style, we see him breaking the composition into bold blocks of color that reduce the flowers to their elementary shapes. The watercolor is a wonderful balance between painterly qualities and color while breaking away from Impressionism. 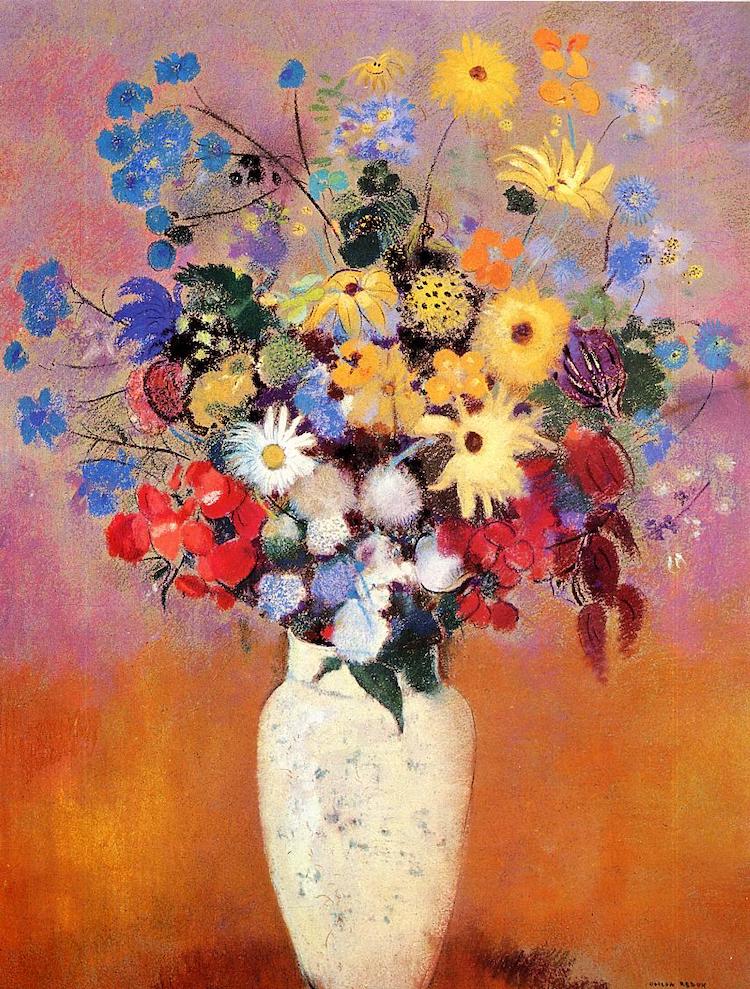 Rendered in pastel, this vibrant flower still-life by Symbolist painter Odilon Redon is a look into the future. Gone is the precise table and background setting so prominent in early Dutch still lifes. Instead, Redon creates space using gradients of pastel color. His blooms move from precise, detailed renderings to more abstract petals that make the entire painting dynamic. Interestingly, Redon did not turn to flower painting until he was 60 years old, at which point he dedicated most of his time creating them. Flower painting was serious business for Redon and he enjoyed it immensely. “I have in my mind’s eye as one of the good things that I have painted, this vase of flowers, which has remained a vision for me,” he once said. “I do not know of anything that has given me more pleasure than such an appreciation of simple flowers in their vase breathing air.”

25+ Blossoming Works of Art Made Out of Real Flowers

How Embroiderers Are Stitching Flowers to Create Blooming Bouquets on Fabric