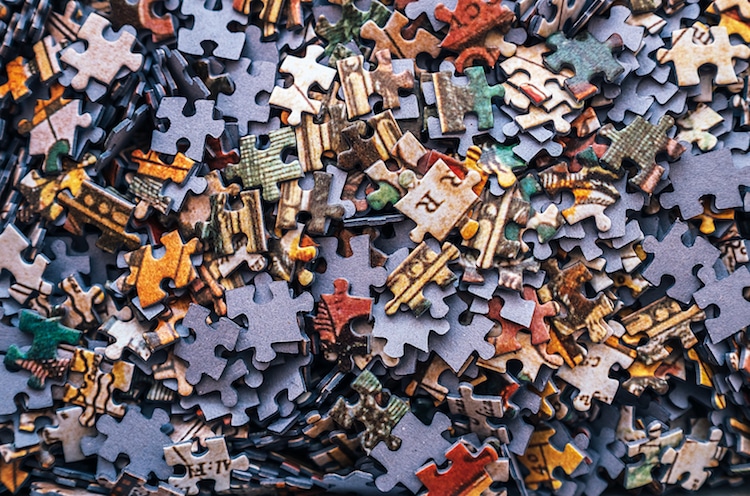 Completing a jigsaw puzzle is an ideal way to relieve stress, keep your hands busy, and build something beautiful. These intricate games are made up of hundreds and even thousands of unique interlocking pieces and are available in a myriad of designs and difficulty levels. Artists and creative companies are continually exploring the boundaries of jigsaws, inventing unconventional, yet beautiful, takes on the age-old activity—like a circular 1,000 piece depiction of the Moon or a reversible 500-piece blueprint of the Guggenheim Museum.

Although puzzles are often regarded as a leisure activity, its beginnings are rooted in education and the teaching of geography. Here, we explore the history of jigsaw puzzles to see how this tiling activity has become a popular pastime for children and adults alike. 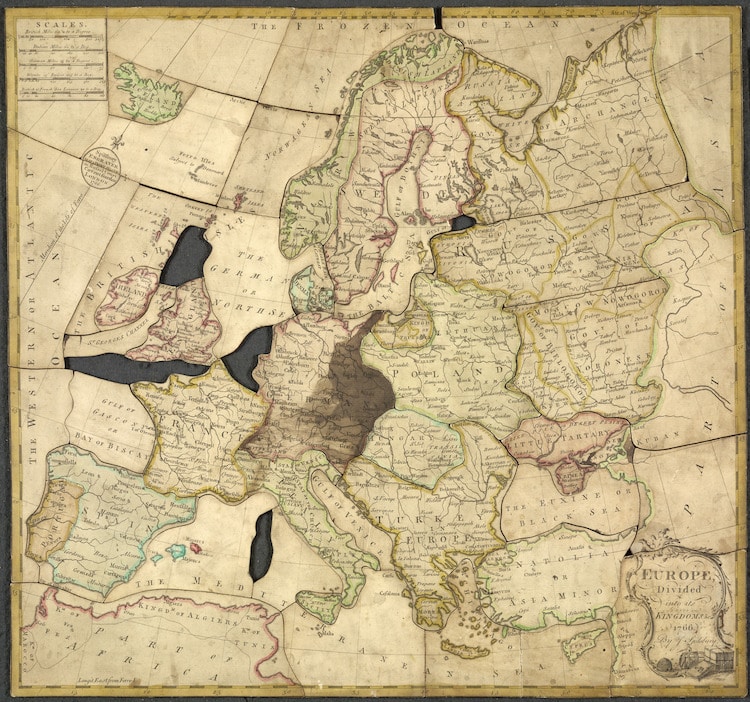 The first commercial jigsaw puzzles were developed around 1760 by British cartographer and engraver John Spilsbury. He fastened a European map onto hardwood and used a marquetry saw to cut along the national borders of the countries. These prototypes were called “dissected maps,” and were used as educational tools to teach children geography.

Seeing that the first puzzles were well-received, Spilsbury began a business and produced puzzles under eight geographical themes: the World, Europe, Asia, Africa, America, England and Wales, Ireland, and Scotland. These early puzzles were popular with affluent households, including the British Royal family.

The Second Industrial Revolution of the 19th and 20th centuries greatly improved the puzzle-making process. Advancements in lithographic printing techniques enabled puzzle makers to transfer higher quality prints onto wooden surfaces. And instead of using hardwood (such as mahogany) to produce puzzles, manufacturers began using plywood—in which layers of thinner wood are adhered together. This allowed for lighter and more affordable material that was also easier to cut. Additionally, the invention of foot-powered treadle saws allowed manufacturers to create more intricate interlocking pieces at a fast pace.

The name “jigsaw” refers to the specialized saws used to produce them, however it would not become commonplace until decades later. 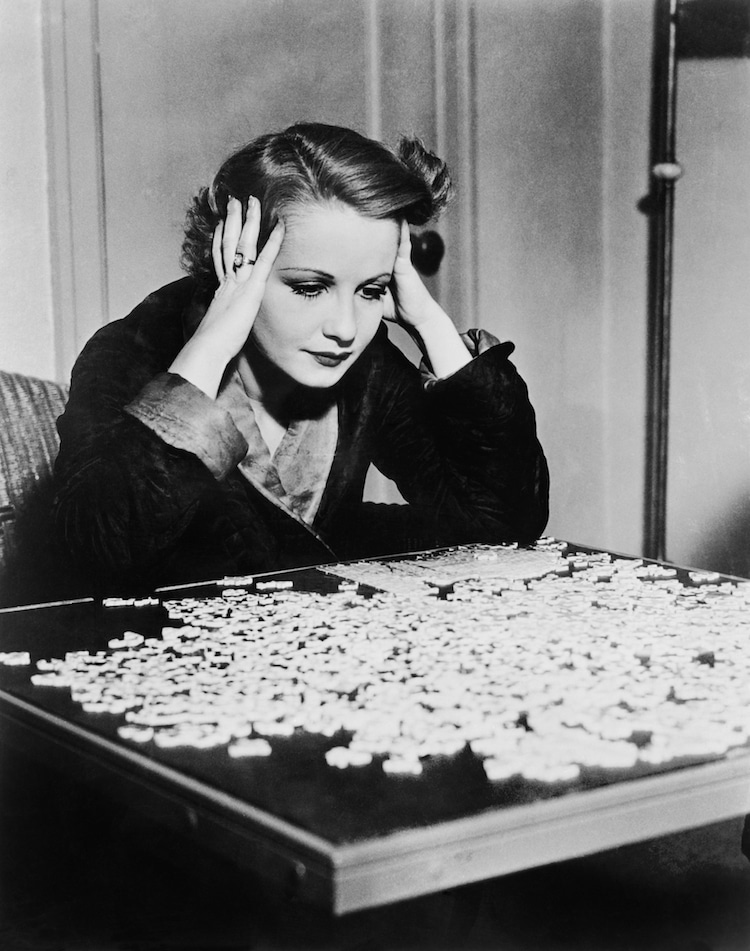 When the Great Depression hit America in 1929, puzzles experienced a huge surge in popularity. Instead of producing puzzles out of wood, American companies began mass-producing puzzles out of cardboard using a new die-cutting technique. This drastically reduced the cost of puzzles. At a time when most families could not afford more expensive recreational activities, jigsaws provided a recyclable form of entertainment.

In fact, because puzzles were so cheap to make, advertisers used them as an opportunity to circulate promotional images. Other companies explored more creative designs of fairytales, castles, ships, and nature. By the 1900s, cardboard jigsaw puzzles were the dominant product, and antiquated wooden puzzles became a rarer, high-end item.

How They're Made Today

Now, the production of jigsaw puzzles is completely modernized and highly variable. Most manufacturers glue the desired image onto the sheet of cardboard, which is then fed into a machine that creates the interlocking shapes by pressing down with precise, steel blades. Other companies employ more advanced technology such as lasers to create highly unique pieces. The strength of laser cutting also allows for a more durable material, such as hardwood or acrylic, to be utilized with ease.

Due to this, unique and unconventional puzzles are emerging which explore the specific parameters of the centuries-old activity. 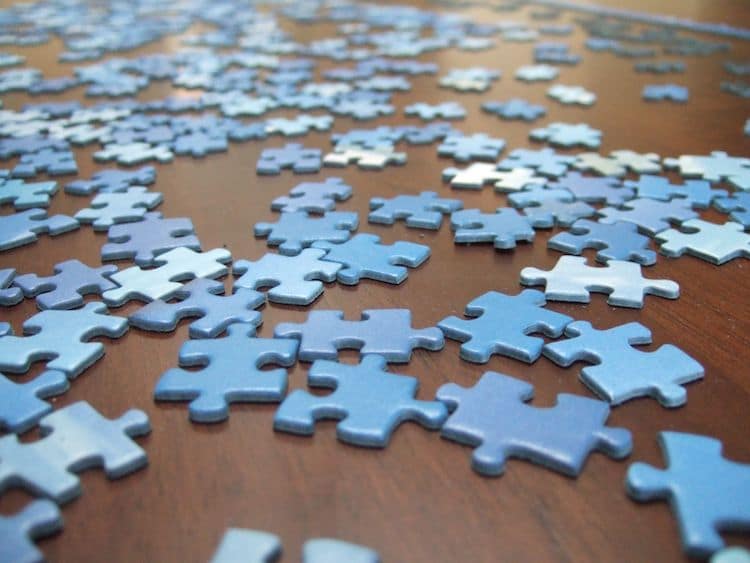 Jigsaw Puzzle Made From Paperboard (Photo: Jared Tarbell via Wikimedia Commons [CC BY 2.0])

Jigsaw puzzles have seen a resurgence in popularity in 2020 due to the coronavirus. The global pandemic, which left the world in lockdown, gave way to more at-home activities like solving the humble jigsaw puzzle. With this growing interest in the age-old pastime, designers began getting creative with the sort of puzzles people could piece together and potentially hang as an artwork. The completed piece was now almost like a beautiful trophy. 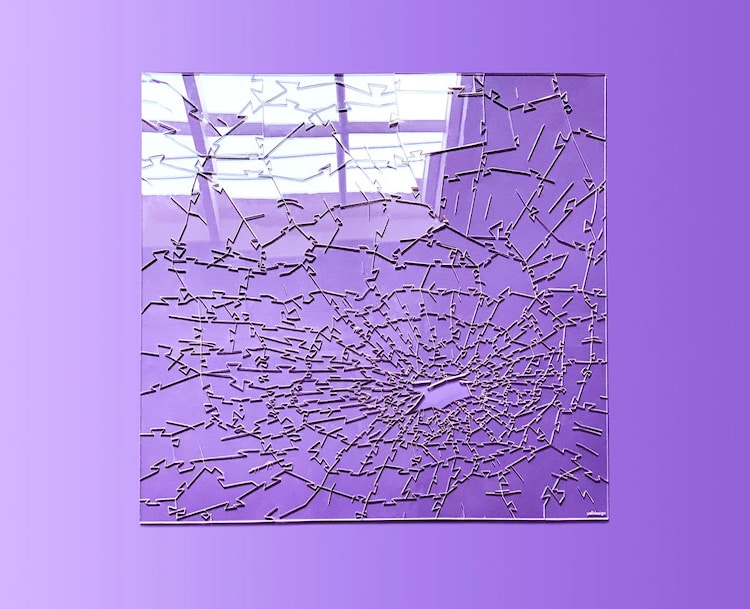 Animation studio turned puzzle making studio, Yelldesign, is one of the most recent puzzle entrepreneurs to create a jigsaw that makes you look twice. Called “The Accident,” this transparent acrylic puzzle is modeled after a shattered pane of glass. 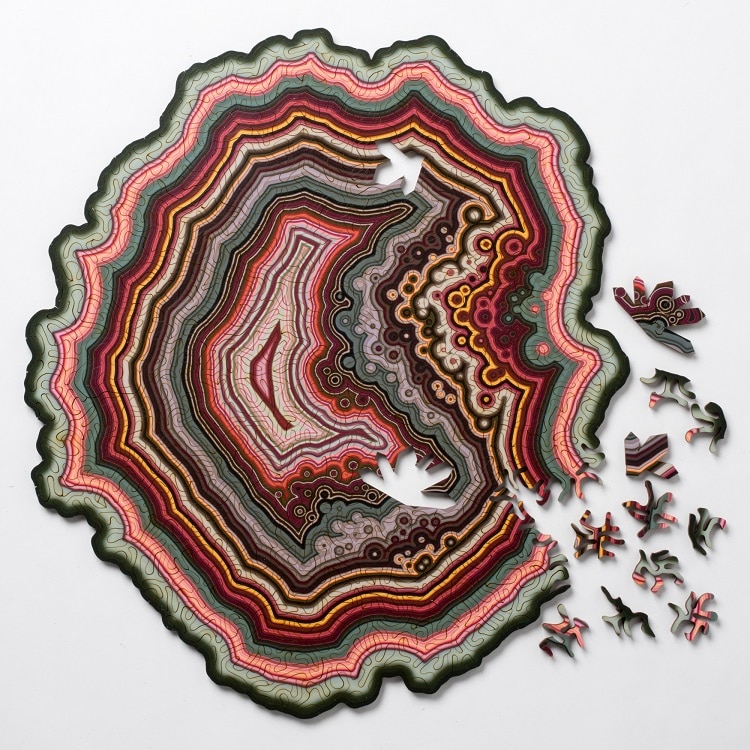 Design studio Nervous System has also been pushing the boundaries of puzzle making with their series of highly unique and extremely challenging Geode puzzles. These maze-like jigsaws are created by a computer simulation that creates natural simulations in the shape, pieces, and image.

Additionally, the record for world's largest puzzle appears to break at rapid succession. Watch the video below to see the completion of the world's largest single image jigsaw puzzle—featuring 42,000 pieces.