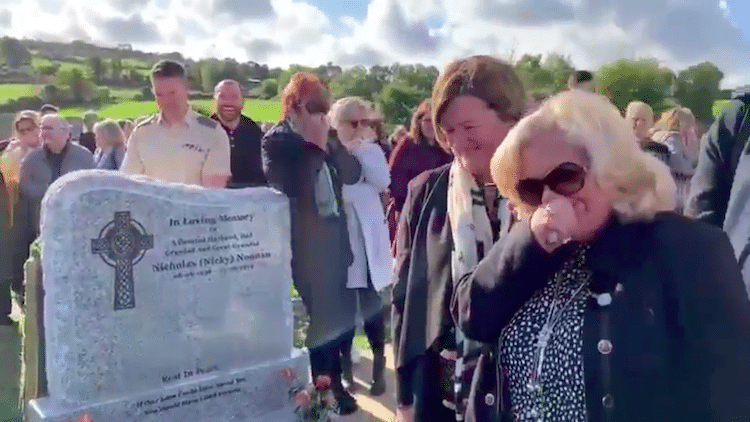 The Irish are known for their dark sense of humor, but a recently departed Dublin man called Shay Bradley took it to a whole new level by having the last laugh at his own funeral. Before he died, he arranged for a pre-recorded message to be played aloud after his casket was lowered into the ground. To the onlooking mourners, it appeared as though Bradley was shouting for help from his grave.

The morbid gag provided a light moment during an otherwise somber day for family and friends. In a video posted on Reddit, Bradley can be heard shouting “Hello?!” before a knocking sound is heard. “Let me out,” he seemingly calls out from his casket. “Is that that priest I can hear?” The bereaved are captured on camera, first looking bemused before bursting into fits of laughter.

“It was his dying wish that we played this at his funeral.” Bradley's daughter Andrea writes on Twitter, “What a man…To make us all laugh when we were incredibly sad.” The twisted joke was not only appreciated by those at the funeral, but online too. On Reddit, one user wrote, “Laughter does help a lot when dealing with grief,” while another commented, “It seems pretty apparent this man loved to bring joy to others and even wanted to continue making people smile after he passed.” We’re sure he’ll be missed!

A recently departed Dublin man called Shay Bradley had the last laugh at his own funeral with a funny pre-recorded message.

Irish man leaves funny recording for his funeral! from r/funny

Bradley's daughter Andrea posted a photo of her father on Twitter.

Here is a picture of the legend himself. My dad, Shay Bradley. It was his dieing wish that we played this at his funeral. What a man…. To make us all laugh when we were incredibly sad….. He was some man for one man…. Love you forever Poppabear #Shayslastlaugh pic.twitter.com/YkG2ecKAaL