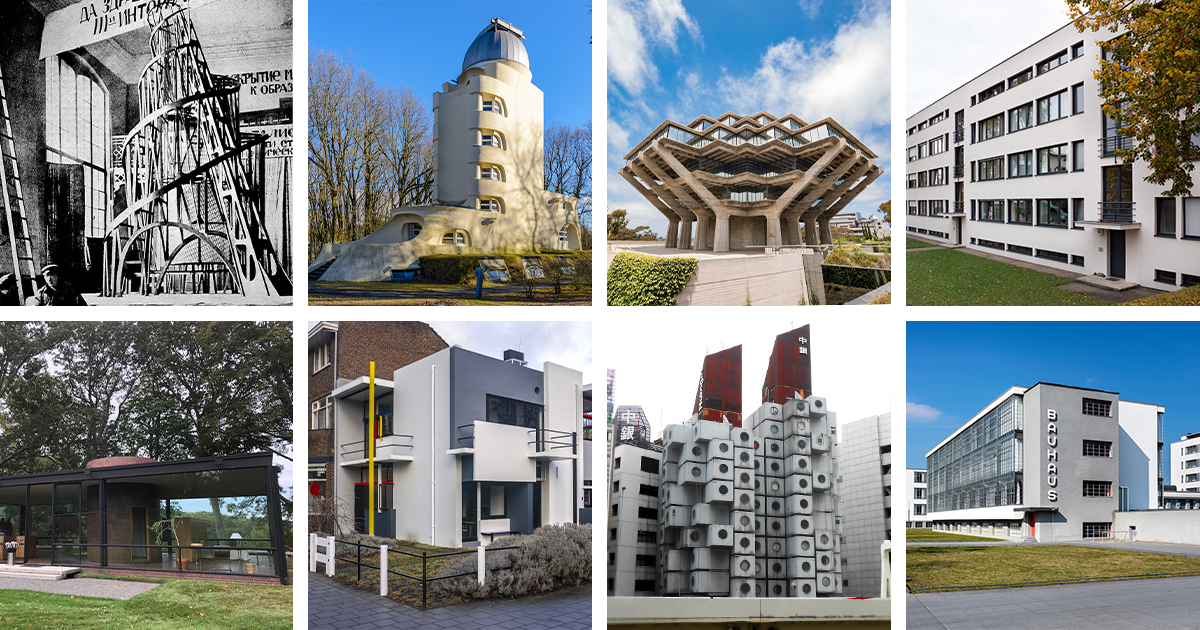 Describing an architecture style as “modern” may inherently be a bit confusing. After all, a structure was modern while it was being designed and built. Why then, do so many movements and styles in the 20th-century fall under modernism? What was so different that designers felt the need to label their work as indicative of a new future? And why did architects feel the need to outline rules for our built environment in the first place? Many of these questions have answers that are directly influenced by historic events. Others are less direct and are engrained in a long history of design styles and cultural influences.

In this article, we will break down some of the most iconic styles of modernism to help build your knowledge of design history and better understand some of the influential works that define modern architecture. What usually unites the different styles of modernism is a focus on logic. Modern design typically eliminates unnecessary visual noise and reimagines spaces for their core functions.

Designer Massimo Vignelli, whose career ranged from graphic design to kitchenware and much more, described this logic-based process. “Good design is a matter of discipline. It starts by looking at the problem and collecting all the available information about it. If you understand the problem, you have the solution. It’s really more about logic than imagination.”

Many of these modernist ideas became popular in the years between World War I and World War II. Designers were motivated to rethink life in almost every way. That is why modernism can be found in architecture, art, literature, and much more. 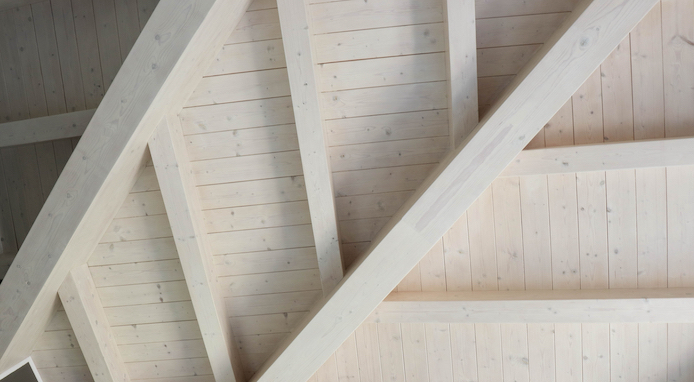 The following characteristics are just some of the ideas that generally define modernism. Since modern architecture covers so many periods in history and so many design styles, some factors are not true for all of them. Some ideas also naturally bleed into other concepts. However, these three broad ideas tend to remain the same.

This famous term, coined by renowned architect Louis Sullivan, does a good job of summarizing modernism. Modern architecture styles are typically driven by the pursuit of logic. Just like in the earlier Vignelli quote, design is not about making art—it is about solving a spatial problem. Sulivan’s inspiration for the famous quote comes from the ancient Roman architectural master Vitruvius, who believed all works should have qualities of firmitas, utilitas, venustas—solidity, usefulness, and beauty.  This pursuit is clear in famous architectural ideas like Le Corbusier’s “machine for living.”

Since logic is the guiding principle behind modernism, it may be obvious that decoration is a hard sell. To modernists, a simple and clean solution is more beautiful than any meaningless ornamentation. Designers also planned for their buildings and structures to be timeless. Any added detail that did not serve a purpose was another opportunity for something to go out of style.

However, you may be able to spot a few exceptions to the rule. How exactly can you be sure that every piece of a building is designed for logic? One potential rule-breaker is Ludwig Mies van der Rohe. He was a devout believer in simplicity and is well known for saying “less is more.” However, he is also known for leaving I-beams exposed in his projects and painted white. Is it decoration to leave the structure revealed when it could have been covered by the wall? Or is this design more rational since it conveys the honesty of materials? It seems that pure logic is difficult to achieve when decoration is often a case of opinion.

“Clean” lines are another byproduct of the idea that form should follow function. Many modernist pieces included flat roofs and other horizontal planes that were shifted to create an effect of overlapping volumes. The guidelines for all of this dynamism were left clear and unbroken. This is also related to honesty in the representation of materials. It was important that the intersection of materials or structural members be exposed so that the designers were candid about the process used to create the space.

Styles of Modernism in Architecture 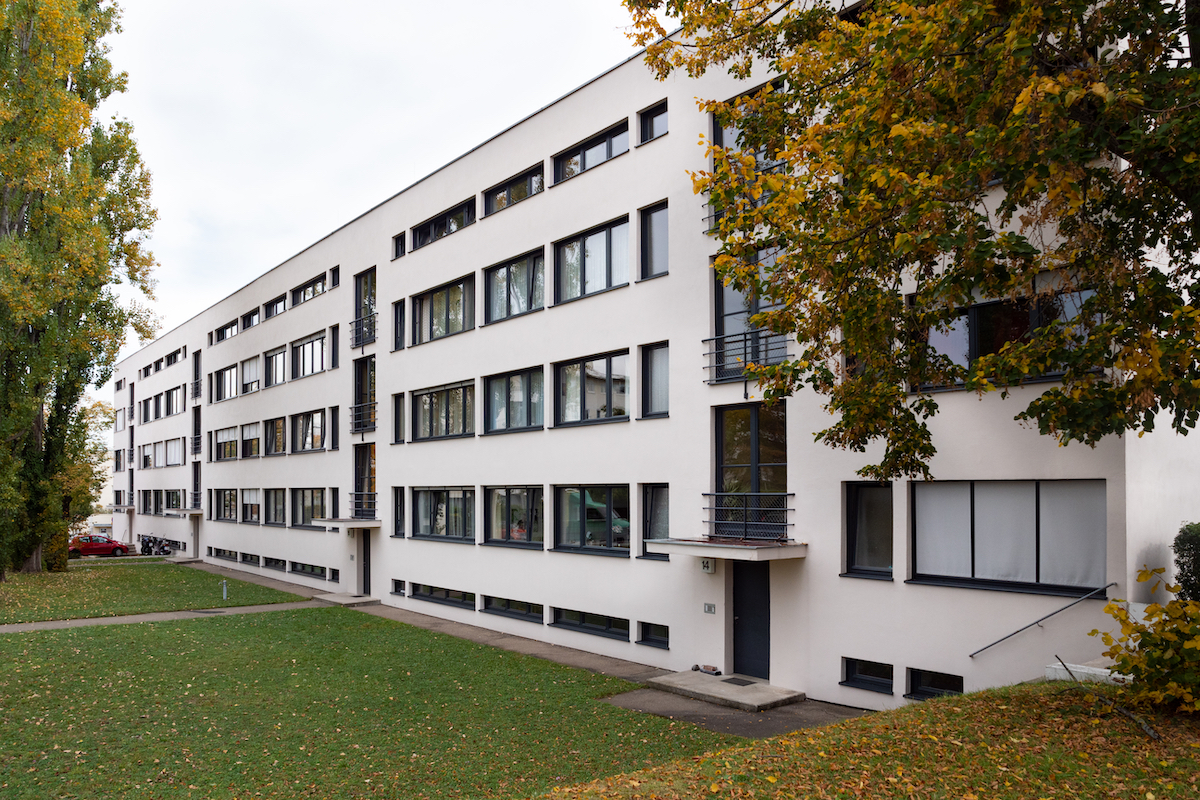 World War I inspired architects to reimagine the world around them, which caused designers in Holland, France, and Germany to pursue designs based purely on logic. This decision is in part due to many buildings of the time decorated with irrelevant historical influences. There was also a need for quickly produced buildings as well as the material innovation around them. These ideas and the pursuit of logic would later influence modernist movements around the world. A few manifestos were written to define the rules of this global and perfectly rational style. The most notable attempt was by a group of 28 European architects called International Congresses of Modern Architecture or CIAM.

Some notable architects of the International Style include Le Corbusier, Ludwig Mies van der Rohe, Richard Neutra, and Philip Johnson—the latter of which first defined the phrase with Henry Russell Hitchcock for a MoMA exhibition. 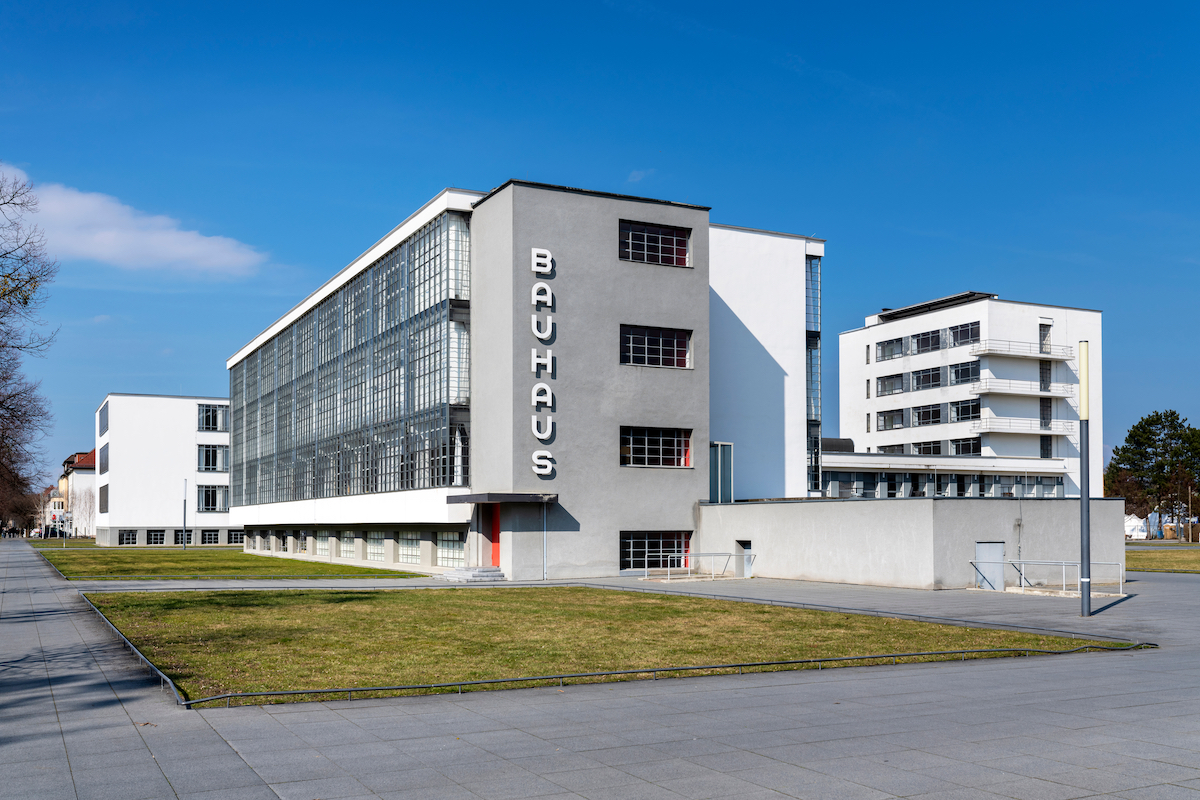 The Bauhaus school was founded in 1919 by Walter Gropius. It operated under many of the same functionalist ideas of what Johnson and Hitchcock would later call the Internationalist Style. Similar to International Style, the Bauhaus school and its founders wanted to make good design accessible to everyone. Because of this, the Bauhaus established modern standards for fine art, furniture, graphic design, typography, and more until the political climate in Germany forced its end. The Bauhaus building in Dessau by Walter Gropius is a great example of Bauhaus architectural principles. 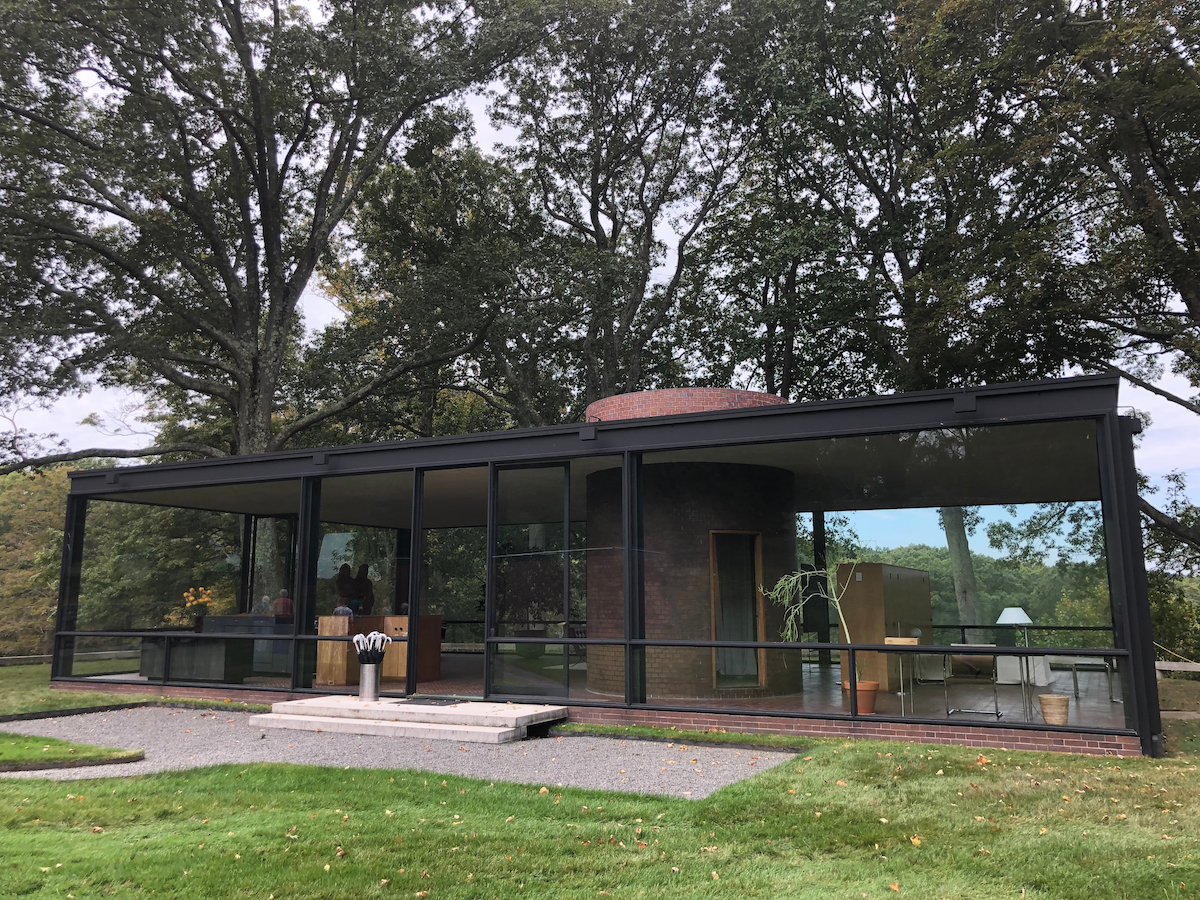 Mid-Century Modernism is often considered the American response to the International Style. In fact, some of the renowned architects of the style, including Ludwig Mies van der Rohe, are also considered architects of the International Style or Bauhaus after they came to the Americas from Europe. Though original designs were created in the 1930s through 1960s, furniture and certain design elements are still popular today.

Similar to the International Style, Mid-Century Modernism planned for a new rational future that reimagined space—especially the home. Elements such as overlapping and shifting planes with clean lines, transparency, and glass that connected the user to nature, and playful color (especially browns and oranges or grays and teals) are all indicative of this style. Color is usually carefully composed with an otherwise simple or monochrome composition of natural materials. 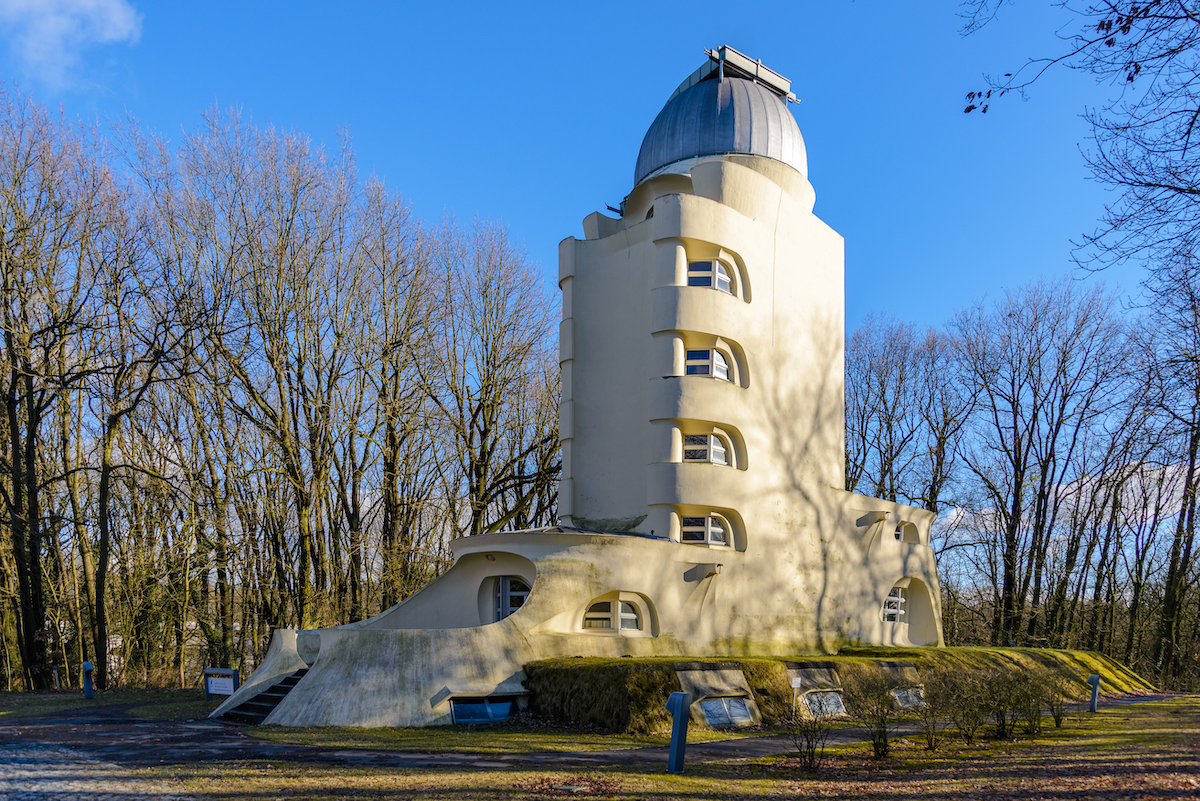 Expressionism in architecture predates International Style, making expressionist work some of the earliest examples of what we now consider modernist architecture. It typically refers to the avant-garde work by Europeans from 1905 to the 1930s. Many of the core ideas of other modernisms can be found in this style including the search for new forms or massings, the incorporation of new material of a new industrial age, and a relationship to the odd forms found in nature.

Expressionist architecture gives an insight into the social and political difficulties of the time. Many works remain only paper projects since there was little opportunity to build due to the economic struggle following the first world war. Architects who did build were often veterans of WWI and their experiences translated into the shift found in expressionism, namely a utopian or romantic shift for a time of peace. A critical distinction is that while some modernist ideas seek to achieve logic, many expressionists viewed architecture as pieces of art. 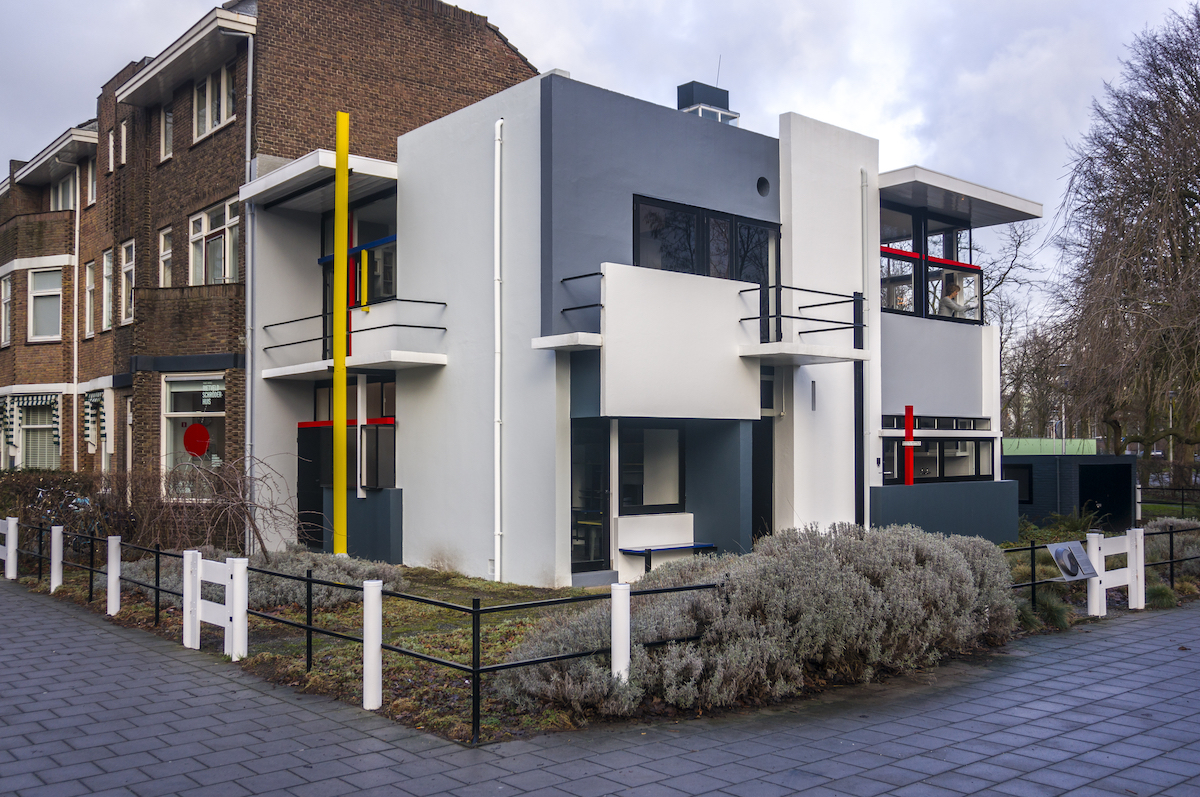 One of the most recognizable characteristics of the Dutch modernist movement of De Stijl is the use of red, blue, and yellow. Even those who do not know much about De Stijl architecture can probably spot a resemblance to paintings by Mondrian. Since designers were simplifying ideas into their pure or most core components, it is logical that they used a color palette only of the most basic—or primary—colors.

Aside from the clear use of color, other characteristics of De Stijl mostly remain consistent with other forms of modernism. The most famous example of De Stijl architecture is probably the Rietveld Schröder house, sometimes cited as the only building where every component fits its principles. 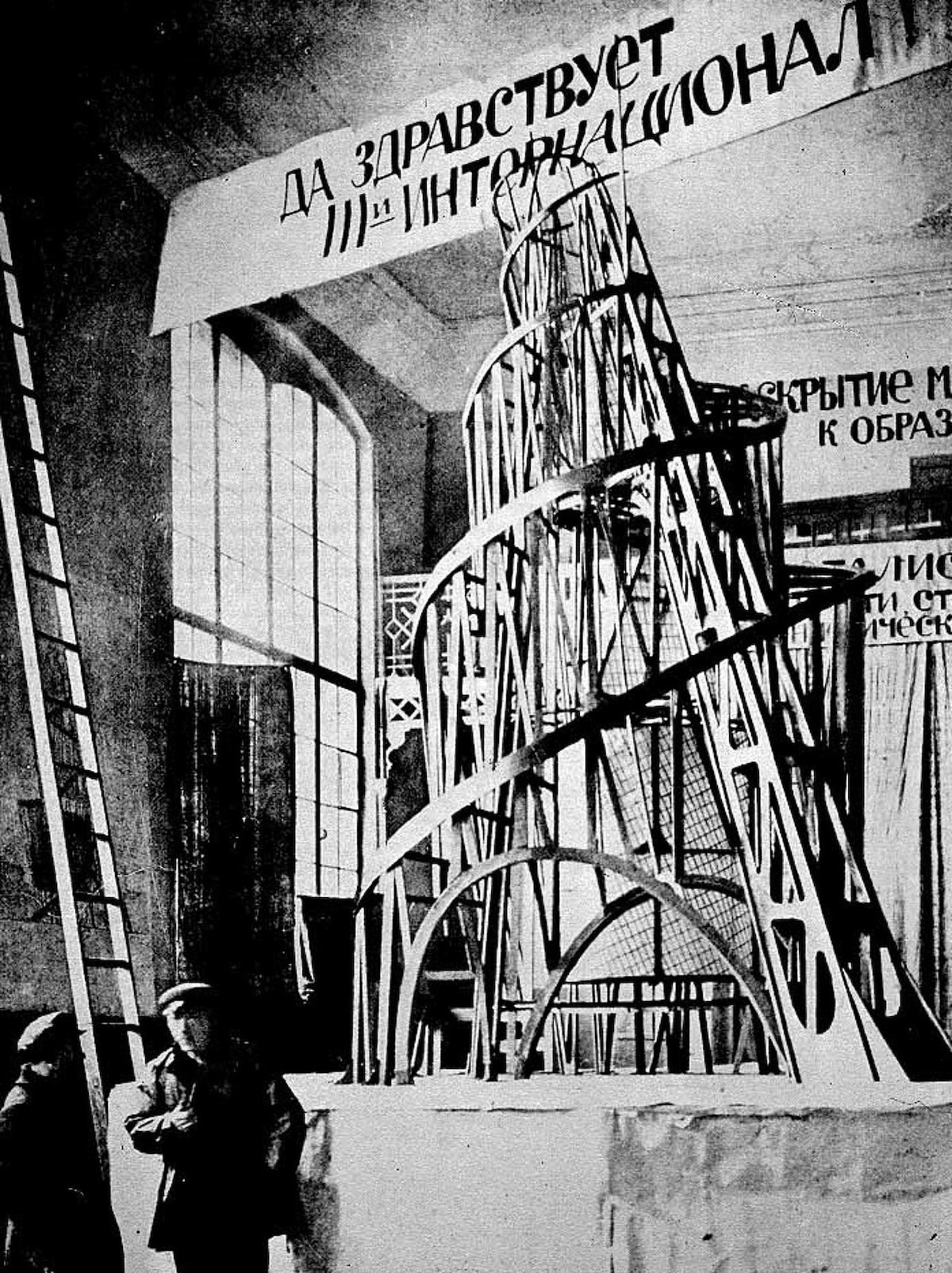 Constructivism is a brand of modernism that began in the Soviet Union between WWI and WWII. Like almost all styles on this list, it is accompanied by an art movement that held similar values. As may be clear from the unique and artistic paper projects that make this style popular, it was heavily influenced by communism and the possibilities of new building technologies and structural design.

Though there are constructivist buildings, many famous constructivist projects exist somewhere between sculpture and architecture. Arguably the most famous example of constructivism is Tatlin’s Tower, a structure that may remind you of the Eiffel Tower. It was a monument to industry—but mostly to the Comintern. The iron, glass, and steel tower would have been over 1,300-feet tall and included elements of pure geometry that held public programs. 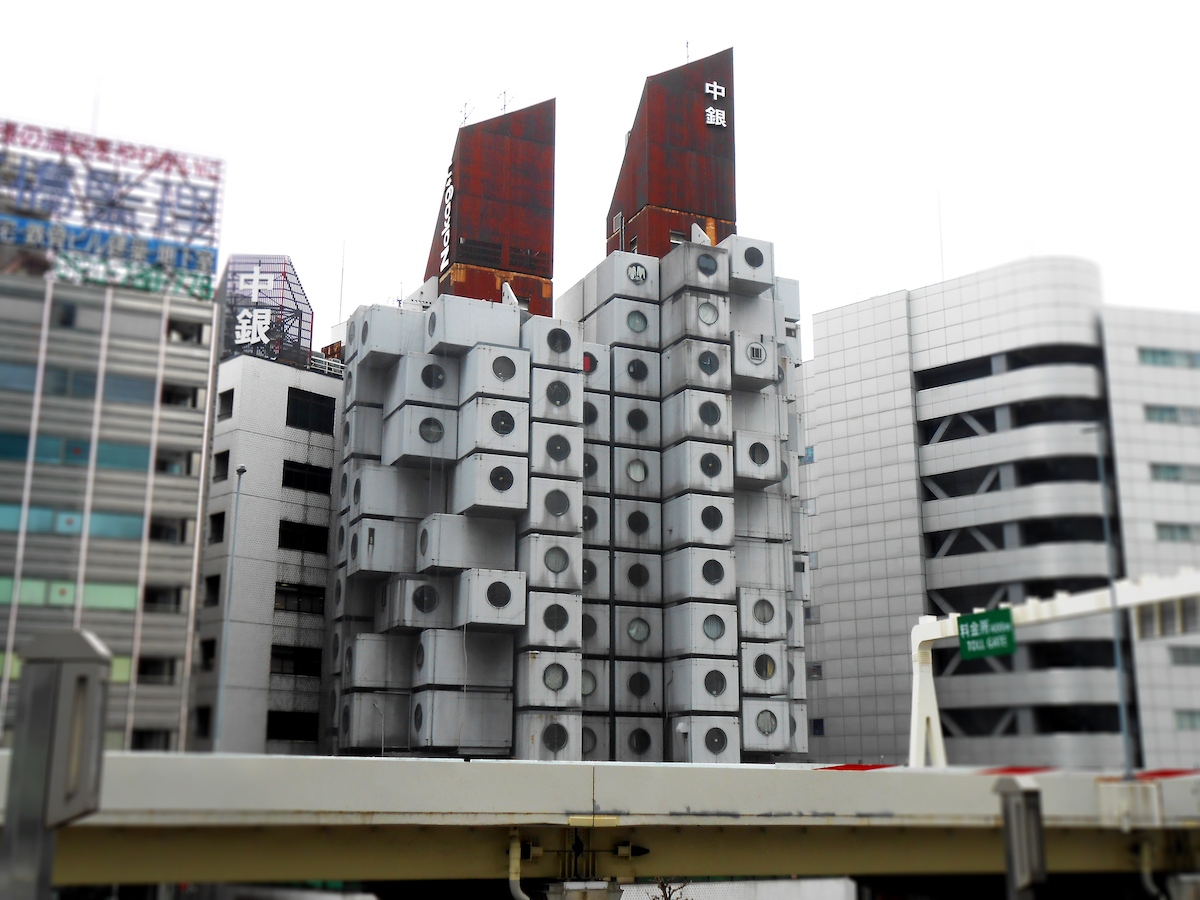 Metabolism was a Japanese modernism movement in architecture. If the name sounds a little biological, that is because Metabolists believed that architecture and cities as a whole should be designed as living, breathing things. The desire for this kind of flexibility is logical considering Japanese designers were watching cities expand for a growing post-war population in the 1960s. The forms of Metabolist buildings tend to demonstrate these organic forms and often modularity that lends itself for future growth and expansion.

The theory of metabolism was mostly promoted by a group of students under Kenzo Tange through a series of essays including “Ocean City,” “Space City,” “Towards Group Form,” and “Material and Man.” Nakagin’s Capsule Tower is one of the most well-known examples of Metabolist structures. 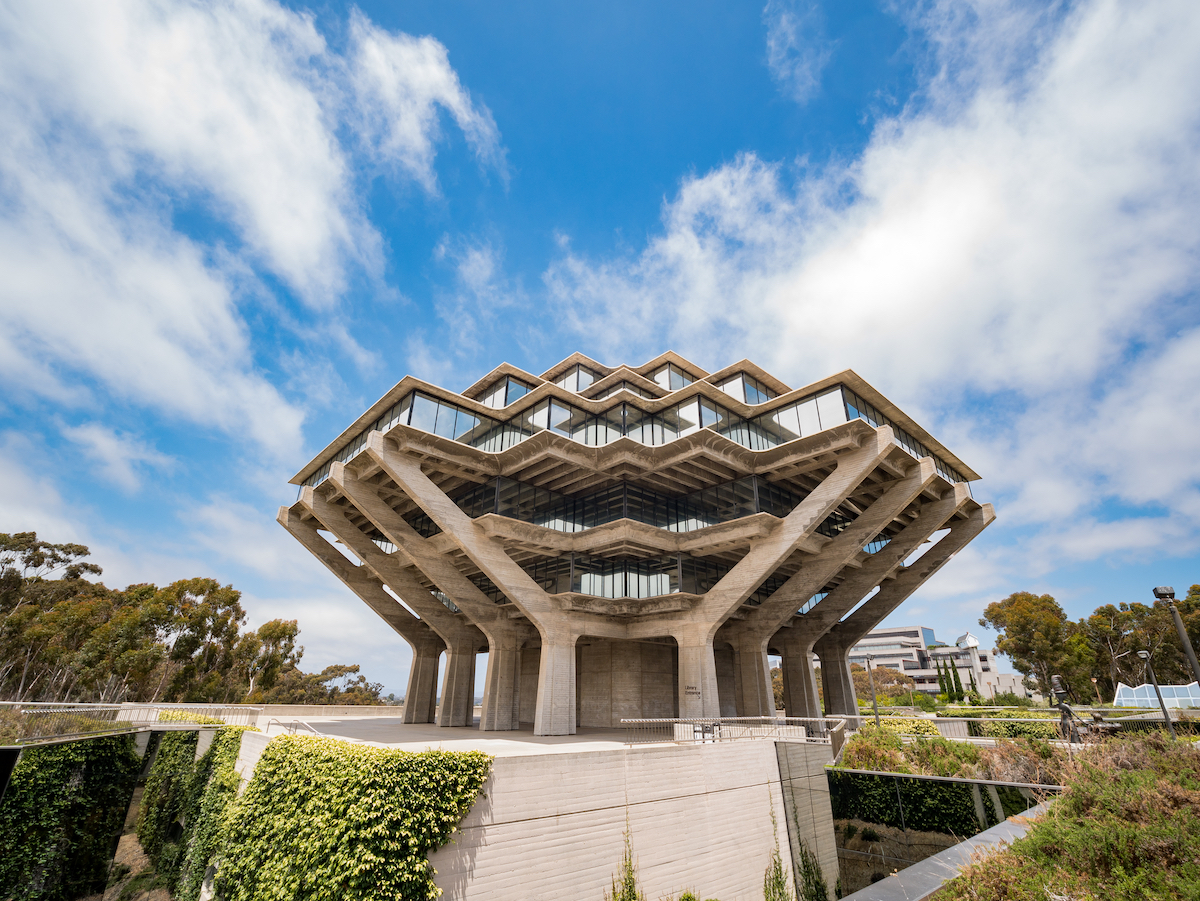 Brutalism comes from the French term “Beton brut” or raw concrete. Brutalist buildings are known for their extensive use of exposed concrete with elements of steel, glass, or other supporting material. It is, like most modernisms, a study of the simplest possible solution to a spatial or programmatic problem. It was also especially conscious of integrity or honesty when expressing the material used in the architecture—hence the usage of often blank concrete walls.

Brutalism was popularly used for social housing projects since its minimalism and functionalism made it an economical option. It is sometimes seen as a controversial architectural style since people can view the lack of decoration as soulless or even mean—though Brutalism occasionally comes back into fashion past its golden age in the 1950s and 1960s.

What Came After Modernism? 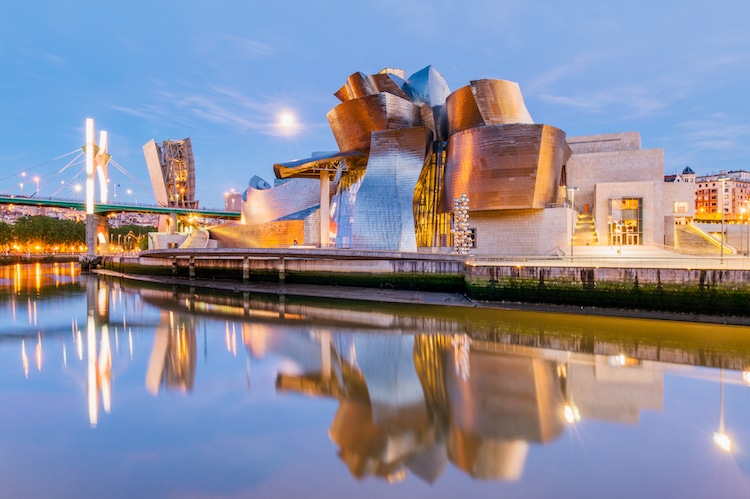 As may be expected from its name, post-modern architecture holds almost none of the same ideologies of modernism. Proponents of postmodernism believed that the International Style and other attempts to make all buildings follow the same design logic was simply boring. They did not believe that buildings should look the same in each city and felt that designers should not limit themselves in form, color, or other modes of design communication. Postmodernism eventually fell out of popularity for a series of new styles. The aesthetic we see today that is often mistakenly labeled modern is better referred to as “contemporary.”

Now that you have read up on all these architectural “ism’s,” you may be wondering what defines contemporary architecture and what will define our next movement? Will we again push back against the logic-based approach and begin focusing on ornamentation? Will new technology define decoration in the future? Will we focus more on environmental design? Only time will tell. For now, you can keep up to date with the newest architectural projects and see if you can pick out the defining characteristics of our latest architectural age.

How many modernism styles did you recognize? Share
Like My Modern Met on Facebook
Get Our Weekly Newsletter
Become a
My Modern Met Member
As a member, you'll join us in our effort to support the arts.
Become a Member
Explore member benefits