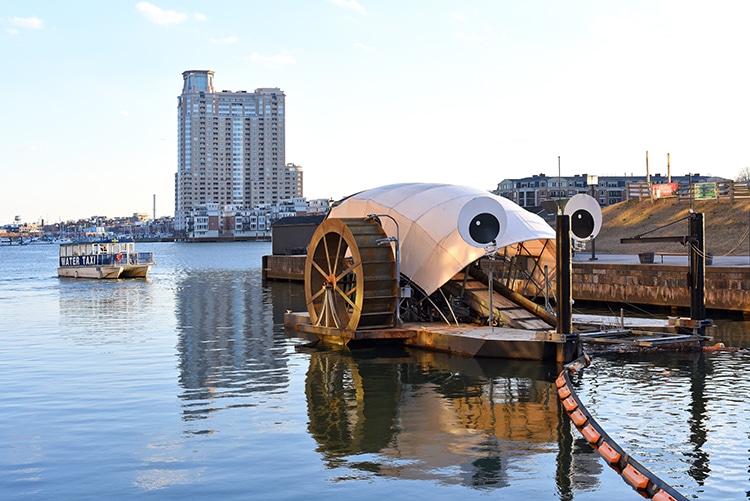 Do you remember Mr. Trash Wheel? The goofy-looking trash collector debuted in 2014 as the environmental guardian of Baltimore, Maryland's busy harbor. The floating trash interceptor was the brainchild of John Kellett and was supported by the Water Partnership of Baltimore. Over the last several years, Mr. Trash Wheel has been joined by other kooky “family members” who help collect many tons of plastic and other refuse from the waters—helping keep the coastline clean for all.

Mr. Trash Wheel—best known for his googly eyes—boasts inner workings that are just as impressive as his outward cuteness. The gloating barge has a water wheel which is churned by the current of the river flowing into the harbor. This moves a conveyor belt and rakes, which grab and move trash from the river to a collection area within Mr. Trash Wheel. Since 2014, the interceptor has collected three million pounds of trash to be removed from the waterways. The design which originated as a napkin sketch by Kellett has become a fixture of Baltimore environmentalism.

Today, Mr. Trash Wheel is joined by Professor Trash Wheel, who launched in 2016 and according to her bio loves women in STEM and dislikes patriarchy. In 2018, the non-binary Captain Trash Wheel joined the family. Gwynnda the Good Wheel of the West will soon complete the Trash Wheel family. Among her dislikes are the micro-plastics and the Salem Witch Trials. Next time you are in Baltimore, be sure to check out these heroic guardians of the harbor.

Since 2014, Mr. Trash Wheel has removed 3 million pounds of trash from the harbor.

You can visit Share
Like My Modern Met on Facebook
Get Our Weekly Newsletter
Become a
My Modern Met Member
As a member, you'll join us in our effort to support the arts.
Become a Member
Explore member benefits
You can visit