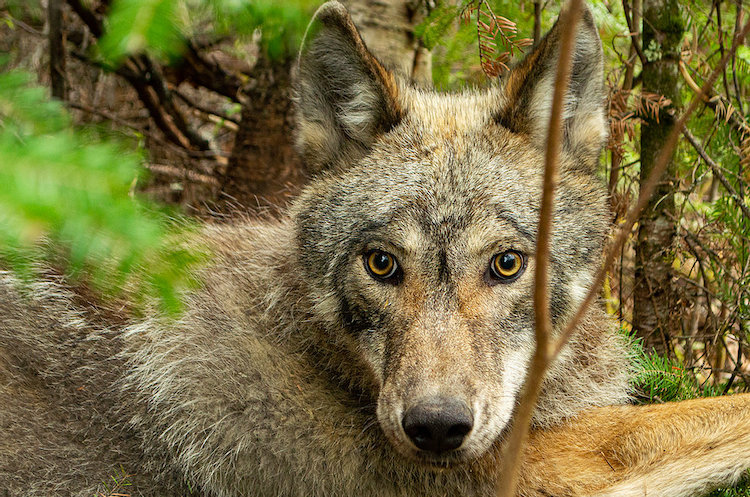 Are wolves really berry-eating, fish-hunting, beaver-ambushing animals? Despite decades of research, there has been a huge knowledge gap due to the limitations of studying wolves during the summer. However, the Voyageurs Wolf Project has been on a hunt to address one of the biggest questions in wolf ecology: what do they eat and do during the summer in forested ecosystems? With the help of advanced GPS-tracking technology and remote video cameras, the Voyageurs Wolf Project has been able to get a closer look at the summer ecology of wolves in northern Minnesota.

Throughout the winter, packs of wolves hunt together to kill large prey such as moose and deer. Once the spring comes around, however, wolf pups are born and wolves become more solitary predators. During the summer, wolves primarily hunt and kill small prey such as deer fawns and beavers, returning to and from the den between hunting bouts. But the predation behavior of wolves during the summer and how these habits affect wolf pup survival is poorly understood. It has been a challenge to study wolf predation on small prey during the summer due to visibility because of dense vegetation.

The GPS-collars have helped reveal not only what wolves are eating, but also where they are killing prey and the locations of den sites. This research has revealed new aspects of wolf hunting behavior and has shown just how variable a wolf’s diet is during the summer. It's also given insight into the complex and fascinating lives of wolves in northern Minnesota.

See for yourself how these elusive wolves live. In about 15 minutes, you can observe animals on a quiet forest trail over the course of an entire year. The Voyageurs Wolf Project team filmed a popular wolves game trail in Minnesota’s Voyageurs National Park from June of 2019 to August 2020. The video captured wolves, deer, moose, bear families, rabbits, squirrels, and lots of other small creatures through day and night, in both spring greenery and winter snow.

Watch how these elusive wolves and forest animals live all year round.

h/t: [The Kid Should See This]

All images via Voyageurs Wolf Project.