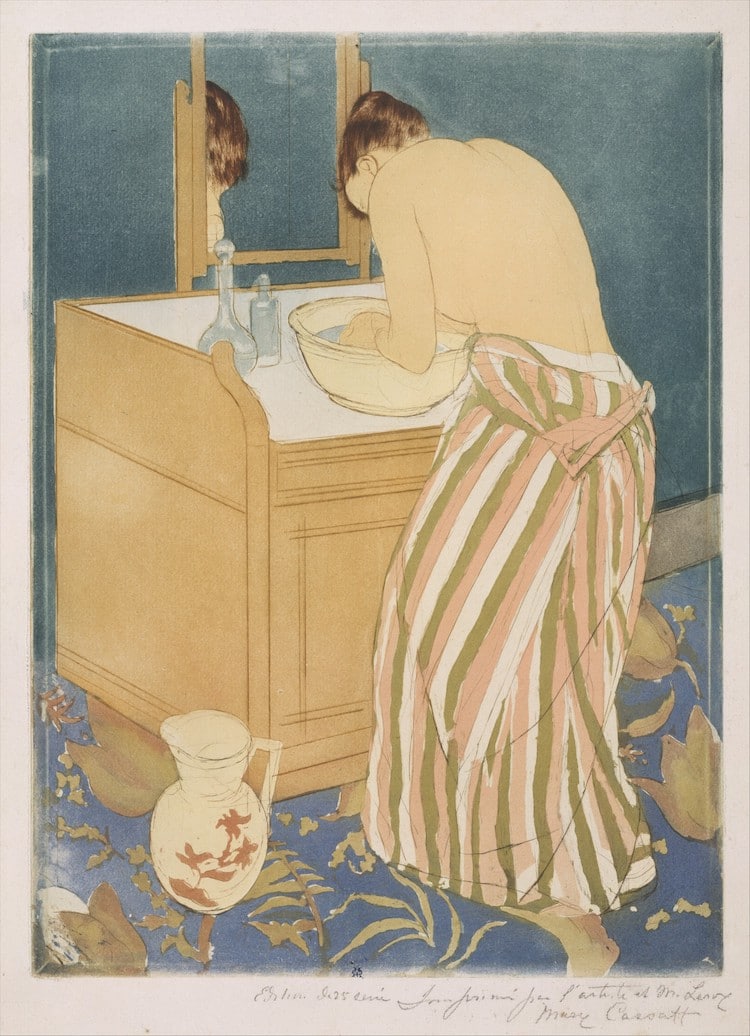 For centuries, artists have drawn endless inspiration from the humble bather. Whether washing in a tub, in a basin, or at the sink, the bathing figure has popped up in art since ancient times, culminating in a muse that appears to float above the rest.

In order to understand why such a seemingly simple subject has had such a long-running history, it's important to trace its artistic evolution. Here, we reflect on the role of the bather in art, wading through age-old sculptures, contemporary paintings, and other works that have made a splash.

See how bathers have surfaced in some of art history's most significant art movements. 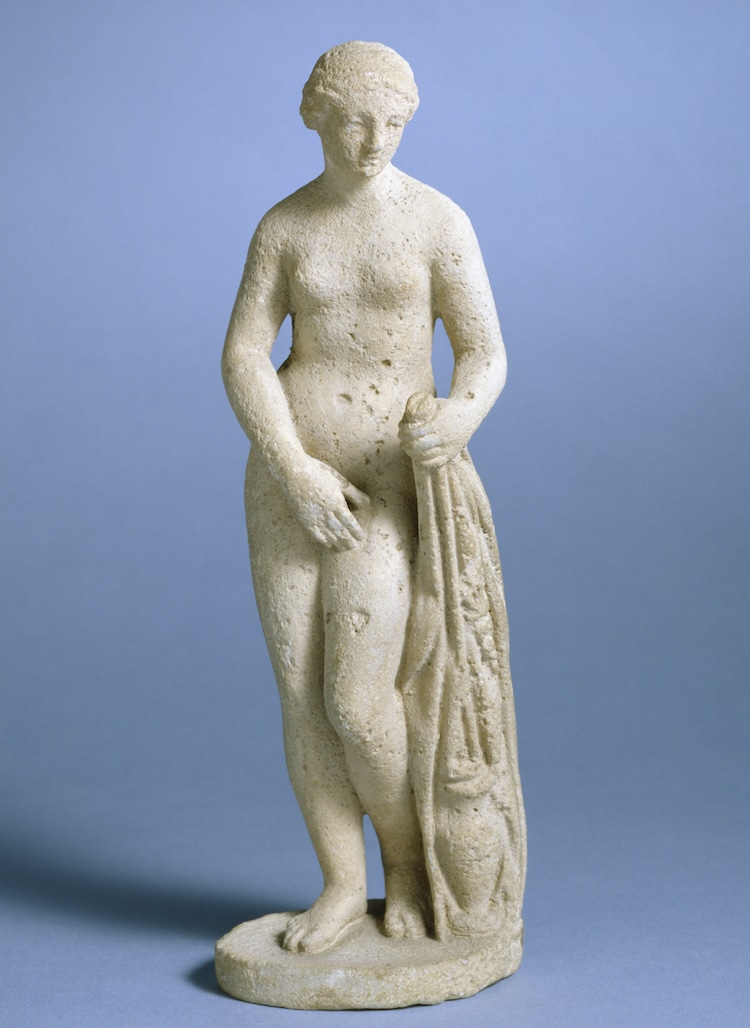 In Ancient Greece, no character captivated quite like Aphrodite. Symbolizing love and beauty, the goddess was an ideal muse for artists, resulting in works like the Aphrodite of Knidos. Originally created by Praxiteles, a 4th-century sculptor, this piece was among ancient Greece's first life-sized depictions of the nude female form. Additionally, as it shows Aphrodite clutching a towel, it is also an early example of a bather in art.

Like many other ancient Greek sculptures, the original Aphrodite of Knidos no longer exists. Instead, its legacy is kept alive by Roman copies. 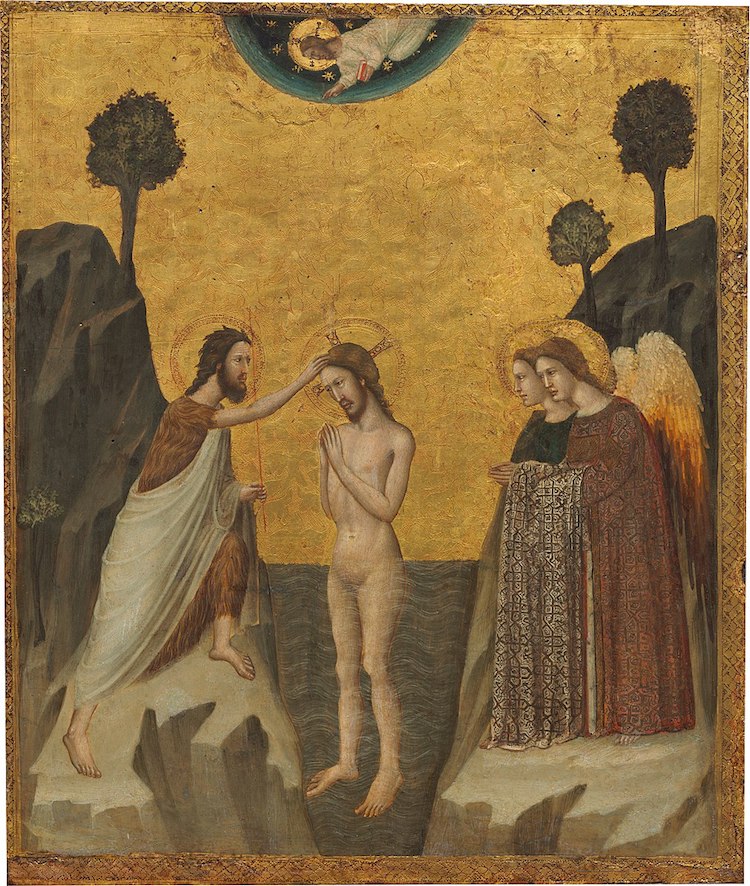 In the Middle Ages, artists in Europe mostly looked to religious motifs for inspiration. With this in mind, it is no surprise that Medieval bathers are mostly found in works depicting the baptism (a symbolic cleansing that would eventually become central to the Christian sacramental tradition) of Jesus Christ.

According to the Bible, Jesus was baptized by his cousin, John, in the Jordan River. After his purification, he emerged from the water, and “suddenly the heavens were opened to him and he saw the Spirit of God descending like a dove and alighting on him.” This scene inspired myriad panel paintings and gilded altarpieces produced during the Middle Ages—and even in centuries to follow. 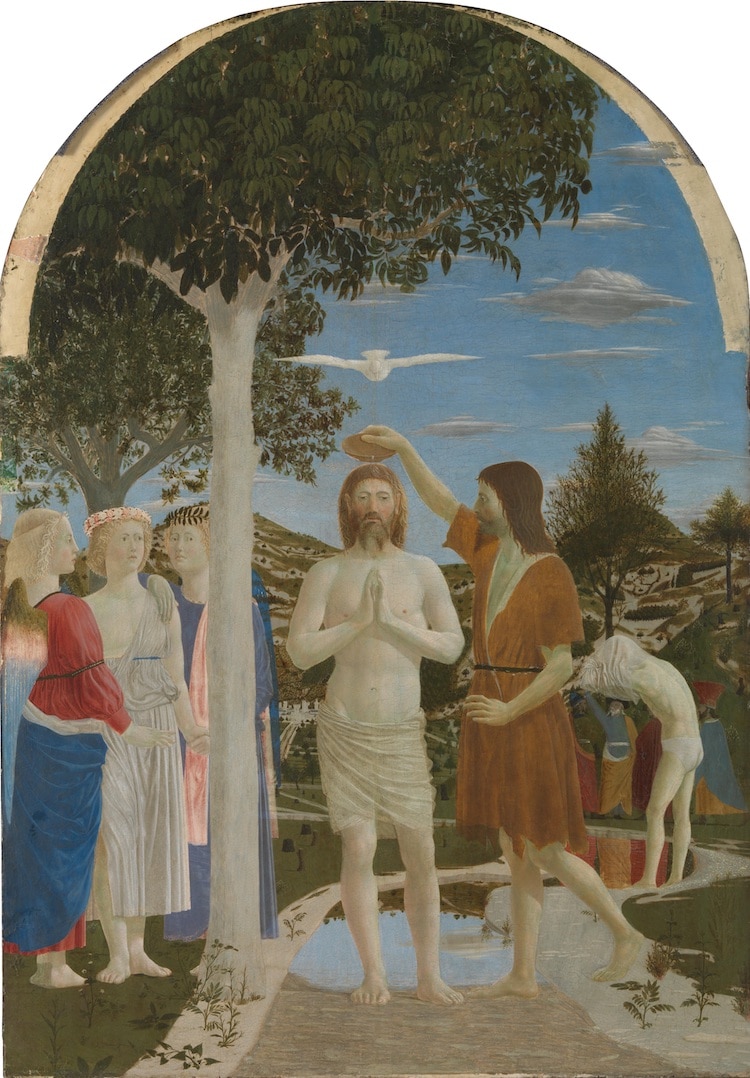 During the Renaissance—a period marked by a renewed cultural interest in classical antiquity—artists retained a preference for religious iconography. Renaissance artists like  Leonardo da Vinci (a key figure of the Italian Renaissance) and Jan van Eyck (a pioneer of the Northern Renaissance) especially enjoyed painting the Holy family, with the relationship between Jesus and John the Baptist again at the forefront.

While many paintings of Jesus and John the Baptist depict the pair as playful young children, some Renaissance works explore important events in their adult lives, including Christ's baptism. Like Medieval depictions of the same subject, these pieces often capture the moment John “bathes” Jesus with blessed water. 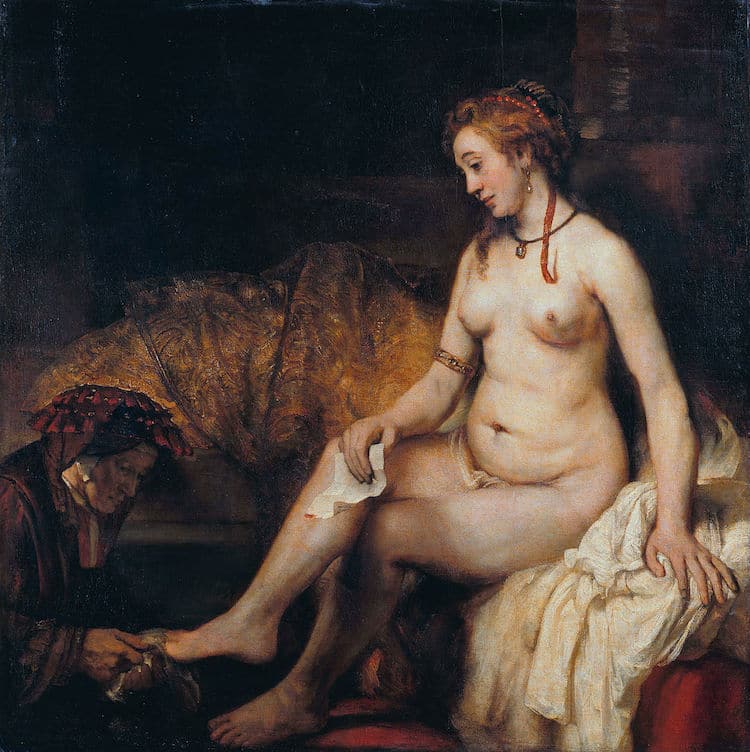 In the 17th century, enlightened artists continued to draw inspiration from the Renaissance approach to painting. In the North, this brought about the Dutch Golden Age, a prosperous era pioneered by “Old Master” Rembrandt.

Like preceding painters, much of Rembrandt's body of work was influenced by Christian tradition—even his bathers. Rembrandt completed several paintings of Bathsheba, a figure from the Old Testament, as she washes. Though directly inspired by Bathsheba's biblical narrative (according to the Book of Samuel, King David lures a bathing Bathsheba to an adulterous fate), these paintings are generally devoid of ethereal details, paving the way for non-religious “bathers” to follow. 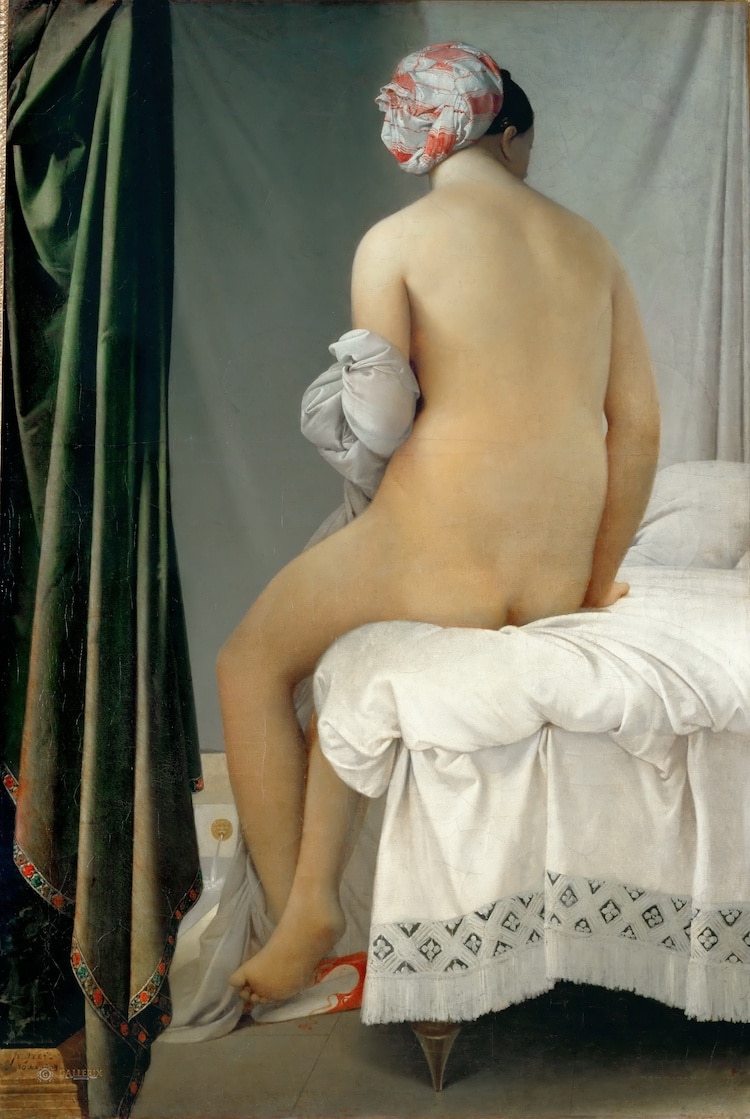 The Valpinçon Bather prominently features a nude woman as she prepares to wash. In addition to its delicate lines and exquisite tones (French writers Edmond and Jules de Goncourt famously noted that “Rembrandt himself would have envied the amber color of this pale torso”), The Valpinçon Bather is renowned for its influence—both on Ingres' oeuvre (it served as a “study” for The Turkish Bath, his final masterpiece) and on one of modern art's most important pioneers. 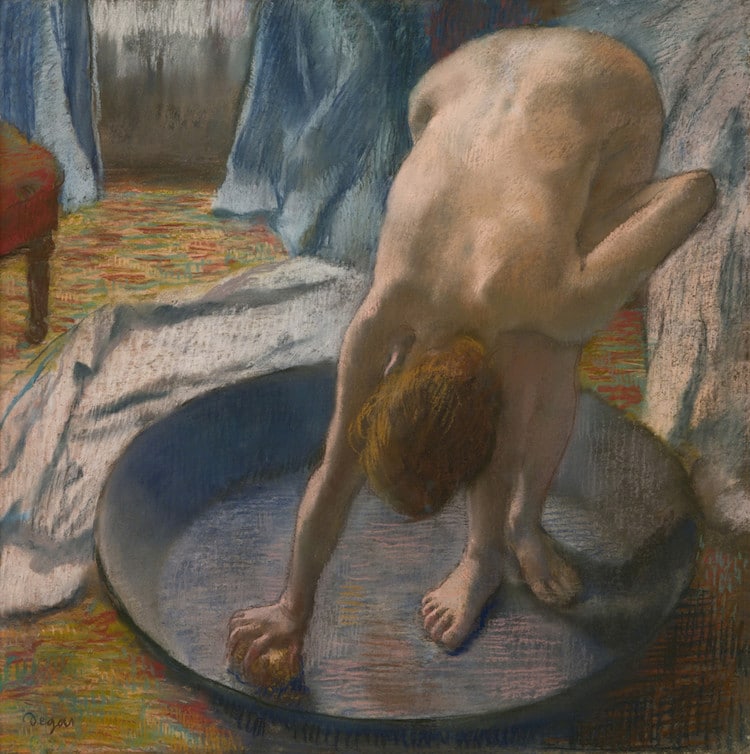 In 1855, Ingres was approached by Edgar Degas, a young painter working as a copyist in the Louvre. As an avid fan of the established painter (he eventually added nearly 20 works by Ingres to his personal collection), Degas was particularly receptive to his advice, which would resonate with him for the duration of his career. “Draw lines, young man,” he famously said, “and still more lines, both from life and from memory, and you will become a good artist.”

In addition to adapting Ingres' attention to line, Degas adopted one of his' favorite subjects: the bather. During the last decades of his life, Degas shifted his focus from his signature dancing girls to women at la toilette. Rendered in pastel and charcoal, these drawings were intended to offer voyeuristic glimpses of his subjects “as if you looked through a key-hole,” illustrating the Impressionist interest in everyday subject matter.

Today, artists continue to explore the bathing theme in their work. One contemporary figure who has found free-flowing inspiration in this motif is David Hockney, a Pop Art pioneer famous for his paintings of swimming pools.

Whether serving as a reflective Portrait of an Artist, a candid shot of a Sunbather, or even a study of A Bigger Splash, Hockney's pool paintings put a contemporary twist on the traditional bather. But unlike preceding artists who were fascinated by the figures themselves, Hockney is drawn to their watery surroundings—an approach that perfectly captures the fluid nature of the celebrated subject.

“Water in swimming pools changes its look more than in any other form,” he explained, “its color can be man-made and its dancing rhythms reflect not only the sky but, because of its transparency, the depth of the water as well. If the water surface is almost still and there is a strong sun, then dancing lines with the colors of the spectrum appear everywhere.”