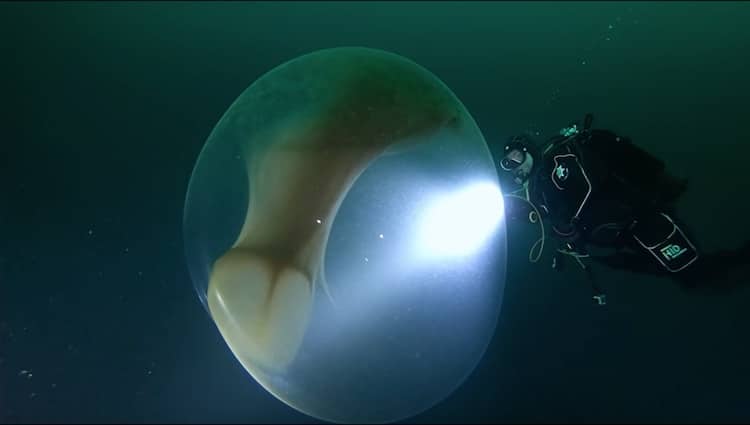 In Norway, a team of divers unexpectedly came across an enormous gelatinous egg sac full of baby squid, proving that truth continues to be stranger (and cooler) than fiction. The team of divers from the research vessel of REV Ocean were returning from a WWII shipwreck 200 meters (about 656 feet) off the coast of Ørsta, Norway when they experienced a surprising brush with mysteries of the blue.

At about 17 meters (about 55 feet) below the surface, the divers met what at first appeared to be a large, almost alien-like blob that, upon longer inspection, turned out to be a giant egg sac full of baby 10-armed squids. Ronald Raasch, one of the REV Ocean divers on site, filmed the chance encounter in a gorgeous underwater video, which he then shared on his YouTube channel.

Raasch describes the blob as a “blekksprutgeleball” (Norwegian for “squid gel ball”) in the video, and it turns out these large egg sacs are sited quite often among the waters near Norway, Spain, France, and Italy. According to Live Science, the appearance of this newfound egg sac appears to share many similarities with the egg sacs of the southern shortfin squid (Illex coindetii), which on average contain between 50,000 and 200,000 eggs inside the sac.

There is still much to be discovered about these elusive animals, but rare videos like this remind us that the ocean is still full of surprises.

A team of divers unexpectedly come across a giant egg sac full of baby 10-armed squid off the coast of Ørsta, Norway while researching a sunken ship from WWII. 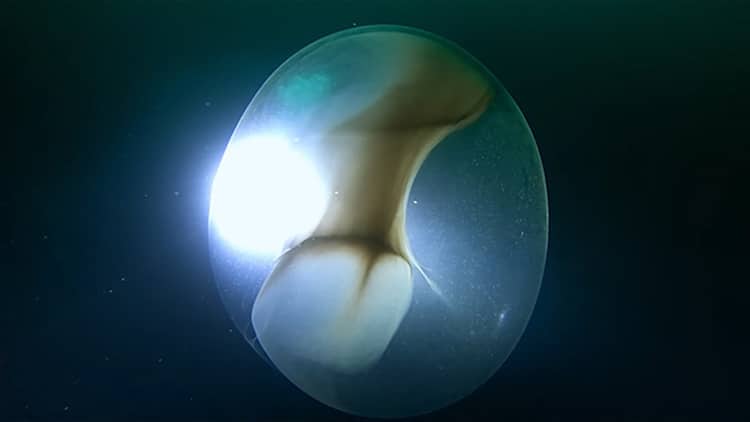