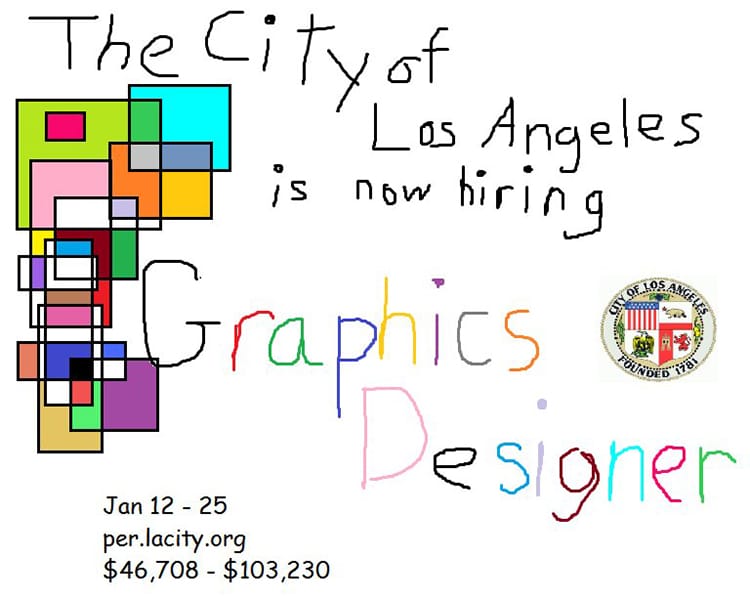 Sometimes it’s okay to admit your limitations; although, rarely do we see such public admissions by a city government. The City of Los Angeles Personnel Department recently posted a job advertisement, for a new graphic designer. However, the ad wasn’t your average job listing: seemingly made in MS Paint, it features a pixelated copy-paste logo, “modernist cubes,” hand-drawn multi-colored fonts, and if that wasn’t bad enough, the particulars were written in Comic Sans.

Although it might look like a joke, the posting is in fact for a real, full-time job, and offers a very reasonable salary of up to $103,230 per year. The ideal candidate should have a Bachelor's degree in Art, Graphic Design or Computer Graphics, or have completed a certificate program in the same fields. The post lasts for two years, and the successful applicant will be asked to carry out various graphic design projects including the creation of “displays, layout design for websites, brochures, descriptive charts, advertising or other publications for commercial or public use.”

Since the City of Los Angeles posted the ad on Twitter, it’s gone viral with over 30,000 retweets and more than 1,000 replies from people who delighted in the hilarious attempt at graphic design, and some have even responded with their own questionably styled résumé.

If you’re interested in applying, you can find the full job posting on the City of Los Angeles career page.

The City of Los Angeles Personnel Department recently posted a hilarious job advertisement for a new graphic designer, which was seemingly made in MS Paint.

So far, a lot of people have expressed interest on Twitter.

And some have even replied with their own questionably styled résumé.

I’d like to submit my resume in consideration for this position. pic.twitter.com/RRezNFSCMp

All images via The City of Los Angeles Personnel Department.

Want to apply? Share
Like My Modern Met on Facebook
Get Our Weekly Newsletter
Become a
My Modern Met Member
As a member, you'll join us in our effort to support the arts.
Become a Member
Explore member benefits
Want to apply?