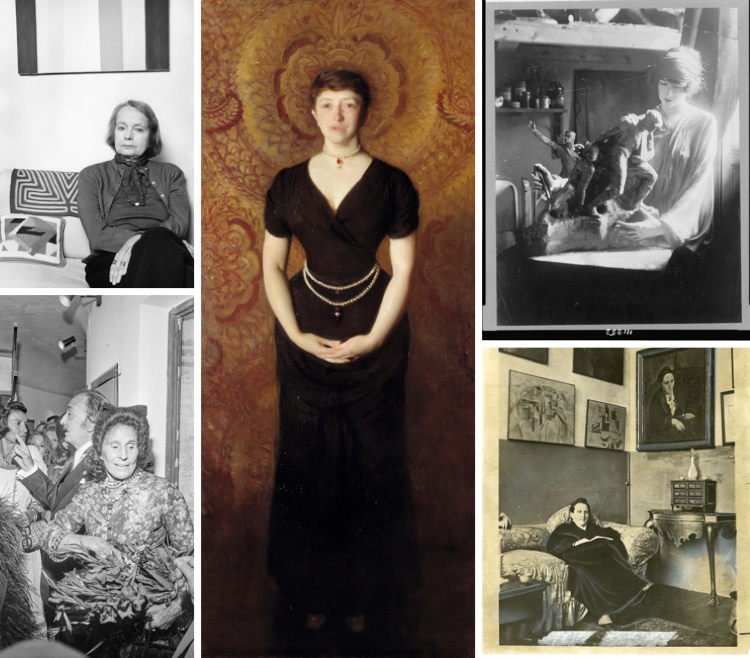 While the art world has historically seen a gender imbalance, this doesn’t mean that there have not been important women working on the scene. Artists themselves often get highlighted, but many female art patrons past and present have helped shape the way we view art. In fact, history is littered with trailblazing women who have influenced art history thanks to their work as collectors, gallerists, patrons, and museum founders.

Though they come from different backgrounds, all the women on the list below were experts at spotting genius and allowing it to flourish. Thanks to their foresight, artists like Picasso, Pollock, and Dalí were able to have the stability needed to let their creativity loose. Some, like Gertrude Vanderbilt Whitney, Peggy Guggenheim, and Isabella Stewart Gardner, founded important museums based off their collections. In Whitney’s case, she helped elevate the standing of American art in a time when it was seen as something that paled in comparison to European art. Others, like Betty Parsons and Ileana Sonnabend, used their galleries to foster and encourage the young talent that would grow into icons like Andy Warhol and Jasper Johns.

And today, women like Sheikha Al-Mayassa are still shaking up the art world. As the chair of Qatar Museums, Al-Mayassa’s acquisitions are keeping the international art market on their toes as the world waits to see how the vast collection they are amassing will be displayed.

Here's our list of 9 bold, fearless women who have shaped the art world.

American socialite and patron of the arts Isabella Stewart Gardner first visited Europe as a teenager in 1857, where she was exposed to Italian Renaissance art. Known for her intellectual curiosity, she surrounded herself with noted artists and writers like John Singer Sargent, James McNeill Whistler, and Henry James.

She was a provocative figure in her day, partially owed to her taste in fashion and eccentric behavior. Isabella and her husband Jack were avid travelers, and from the mid-1870s visited the Middle East, Europe, and Asia for long stretches. It was while in Europe they began amassing a large art collection, though Gardner also purchased work in Egypt and the Far East.

Gardner not only collected paintings, but also ceramics, silver, stained glass, and architectural elements like doors. After her husband’s death in 1898, Gardner set about establishing a museum in Boston for their vast collection, which included several portraits of the socialite by John Singer Sargent. The museum opened in 1903 and is still hung to Gardner’s specification. The eclectic collection includes everything from a Titian masterpiece to works by Matisse and Egyptian objects.

In 1990, the Isabella Stewart Gardner Museum was the subject of a high-profile robbery. Thirteen artworks were stolen, including a rare Vermeer and Rembrandt’s only known seascape. One of the biggest unsolved art thefts in history, the works stolen are valued at $500 million. 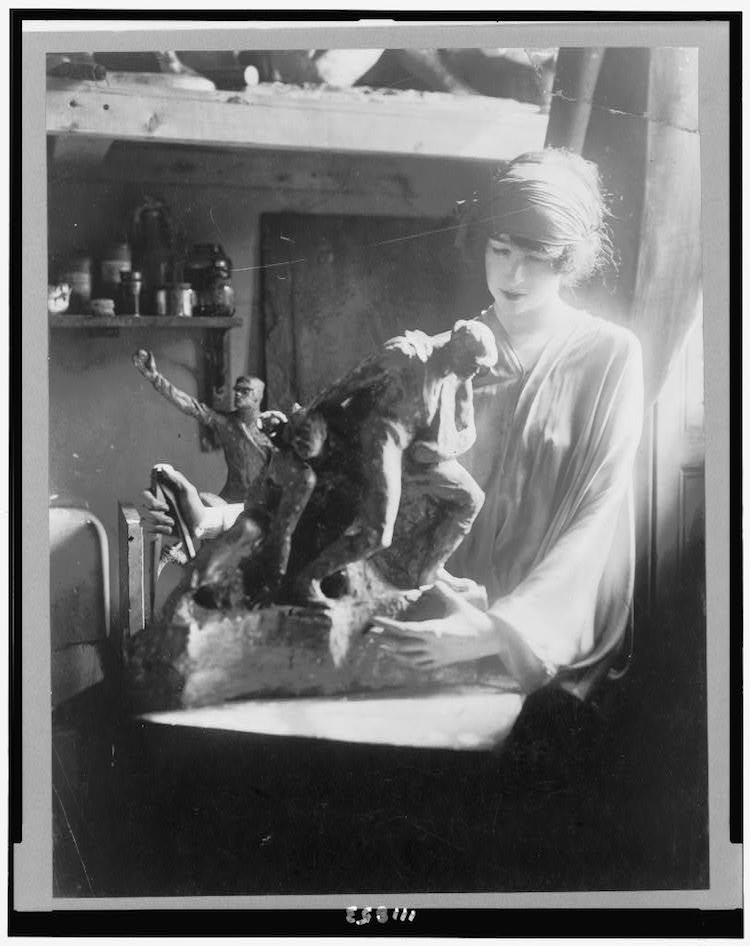 Gertrude Vanderbilt Whitney standing with her sculptures of soldiers, 1920. (Photo: Library of Congress)

By being born a Vanderbilt and marrying into the wealthy Whitney family, Gertrude Vanderbilt Whitney used her status as an American socialite to advance the arts. She was also a sculptor, first working under an assumed name for fear that her social status would not allow her to be taken seriously. In fact, her family and husband did not support her artistic ambitions.

Still, she established studios in both New York and Paris and, by 1910, began showing her work under her own name. Her sculptures won several awards and were accepted at the Paris Salon of 1911. After the end of World War I, she focused on public memorials, many of which can still be seen across the United States.

Her wealth also allowed her to become a patron of the arts, and she was particularly keen to support fellow female artists. She used her influence to ensure that other women were included in group exhibitions and supported female-only shows. She also helped finance organizations that promoted artistic practice outside the academic norms and even underwrote the publication of The Arts magazine to prevent it from closing. In 1914, she established a club in New York where young artists could gather and chat, also providing housing stipends to help working artists make ends meet.

After the Metropolitan Museum of Art declined her offer to donate her collection of almost 700 works of modern American art (at the time they did not accept works from the United States), she decided to build her own museum. So, in 1931 she established the Whitney Museum, appointing a woman as its first director. The museum’s embracing of modernism was a huge institutional shift in America, as American art had previously been seen as provincial. 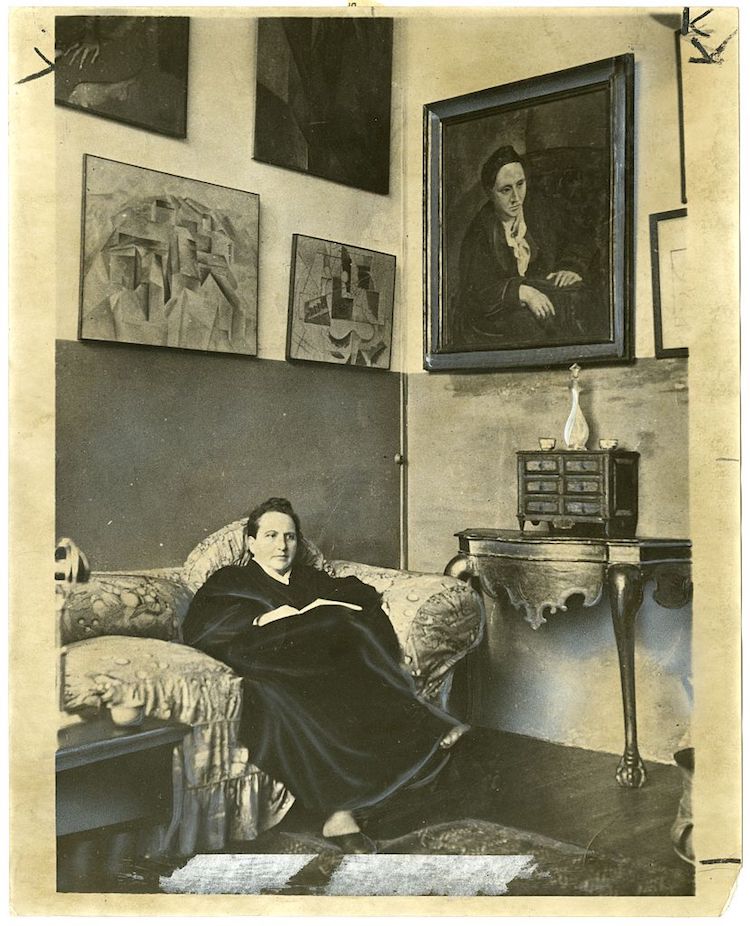 Gertrude Stein sitting on a sofa in her Paris studio, with a portrait of her by Pablo Picasso, 1930. (Photo: Wide World Photos, Inc. via the Library of Congress)

Novelist, poet, and playwright Gertrude Stein was born in Pittsburgh, but moved to Paris in 1903 and would spend the rest of her life in the French capital. She hosted a salon in Paris where Matisse, Picasso, Hemingway, F. Scott Fitzgerald and many more would meet. Together with her brother Leo, Stein created an impressive art collection. Between 1903 and 1914, they accumulated art by Gauguin, Cézanne, Renoir, Delacroix, and Toulouse-Lautrec, among others.

The siblings would split their collection after they ceased living together, but Gertrude’s reputation in the art world only grew. At the time, art critic Henry McBride wrote that Gertrude “collected geniuses rather than masterpieces. She recognized them a long way off.” Stein was especially appreciative of Pablo Picasso’s work. He’d painted her portrait in 1906—it’s now on display at the Metropolitan Museum of Art—and she continued to support his work when it transitioned to Cubism.

Known as a genius in her own right for her own literary work, Stein’s importance in the art world cannot be underestimated. Her support of post-Impressionist artists helped the careers of many—like Matisse and Picasso—who are now considered masters. 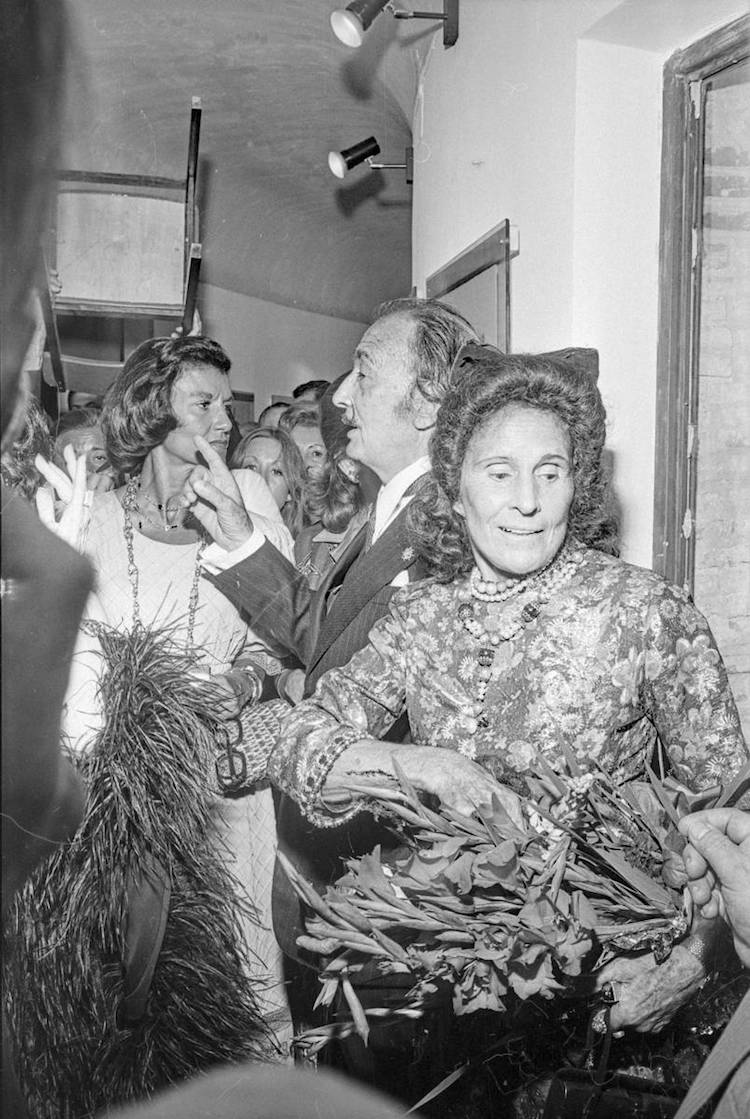 Gala Dalí and Salvador Dalí at the opening of his museum in Figueres, Spain, 1973. (Photo: Narcís Sans Prats via the Ajuntament de Girona)

Gala Dalí was much more than Salvador Dalí’s wife. Not only was she Dalí’s muse, featuring prominently in many of his artworks, she was also his business manager. She handled all negotiations with his patrons and galleries, ensuring that the artistic genius could focus on creative work.

It’s said that she managed even the smallest details of his life, down to the paint brushes he used. Together, they built a lasting empire that still endures long after their deaths.

Even prior to meeting Dalí, Gala was fully entrenched in the Surrealist salons of 1920s Paris. Married at the time to poet Paul Éluard, one of the founders of the movement, she had a big presence in the group and counted painter Max Ernst as one of her lovers.

Socialite Peggy Guggenheim was born into the wealthy Guggenheim family of New York City. The niece of Solomon R. Guggenheim, who founded New York’s Guggenheim Museum, she rose to prominence as an important collector of art. In 1912, when she turned 21, she inherited $2.5 million (valued at $35.3 million today) and moved to Paris, where she befriended Man Ray, Constantin Brancusi, and Marcel Duchamp.

In 1938, she established a modern art gallery in London and began seriously collecting art, focusing on Surrealist and abstract art. Through Duchamp, she created many connections in the art world and exhibited works by important modernists like Henry Moore, Alexander Calder, Pablo Picasso, Jean Arp, and Max Ernst. After one year, she decided to shutter the gallery and focus her efforts on creating a museum.

She settled in Venice in 1949 and established the Peggy Guggenheim Collection to showcase her impressive collection of modern art. Today it is still one of the biggest attractions in Venice and highlights Cubism, Surrealism, and Abstract Expressionism by both European and American artists.