The tell-tale sign of a great work of art is timelessness. That's why it's no surprise that many artists today often look to art history's many masterworks for inspiration. While some contemporary creatives' nods to the past are understated—perhaps an appropriated color palette or the adoption of a subtly similar style—others pay particularly straightforward homages to the past by putting a present-day spin on age-old masterpieces.

From digitally manipulated photographs and hypnotic animations to sculptural reinterpretations and old-meets-new street art, this curated collection of classic works of art modernized proves that, like fine art, a little creativity never gets old. 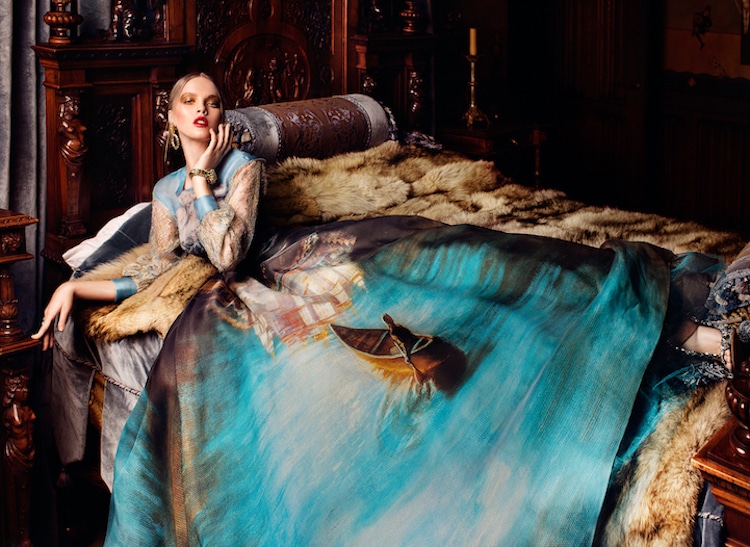 In Paint Me Over, photographer Marina Danilova captures a series of gorgeous gowns adorned with art inspired by age-old oil paintings. Designed by Svetlana Lyalina, each couture dress juxtaposes traditional textile patterns and detailing with figurative scenes worthy of a wall in a museum.

All Dressed Up With Nowhere to Go 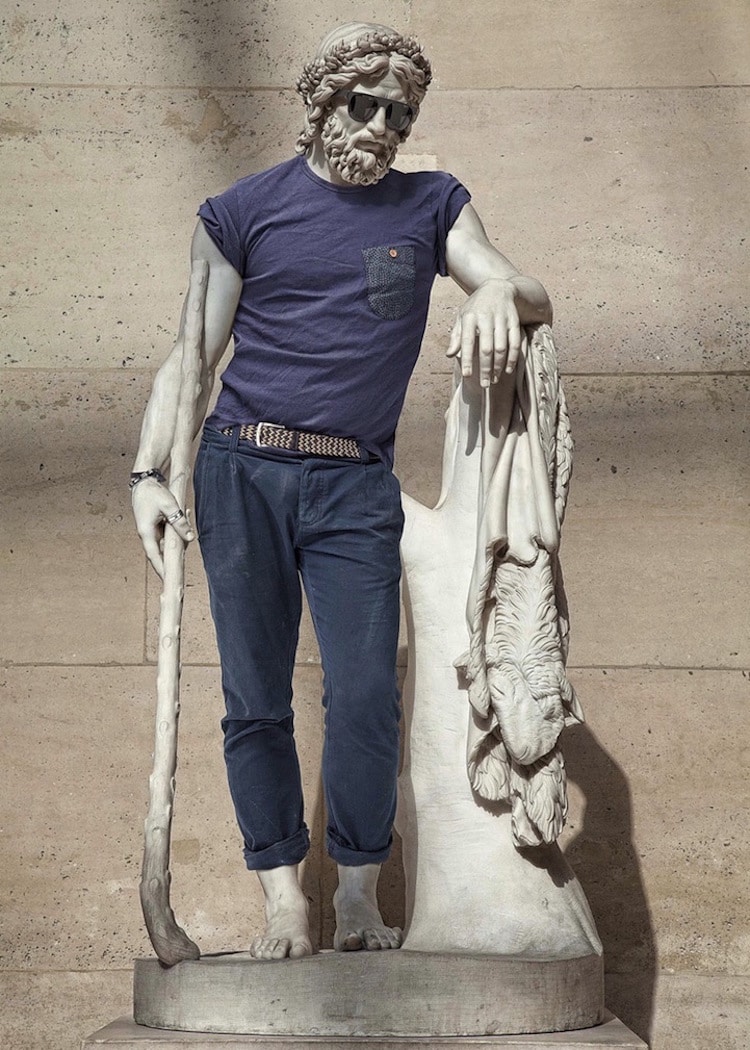 Street Stone, a silly series by photographer Lo Caillard digitally dresses classical sculptures in modern ensembles. Caillard states that the purpose of the project is “to catch the eye of the beholder by the marriage of two worlds so different.” 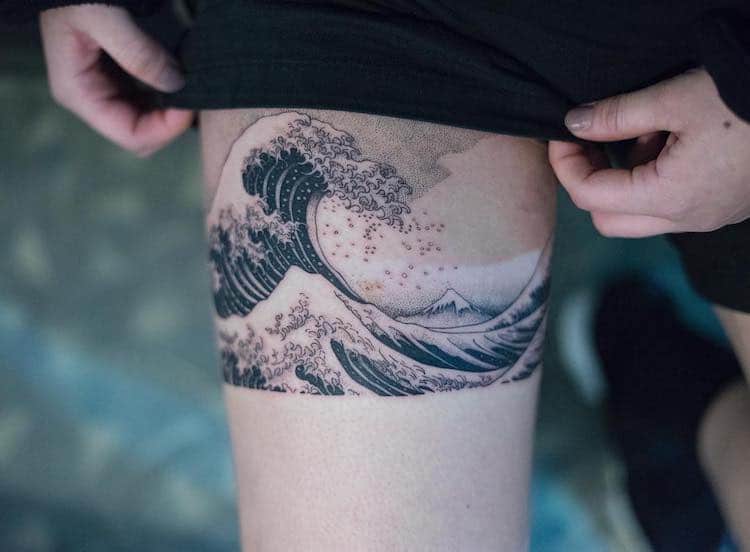 Using skin as his canvas, Korean tattoo artist OOZY creates eye-catching, meticulously detailed body art. While his inked  portfolio portrays an eclectic array of subject matter, he is often commissioned to create reproductions of the classics, with The Great Wave off Kanagawa by Hokusai remaining a popular request among his clients. 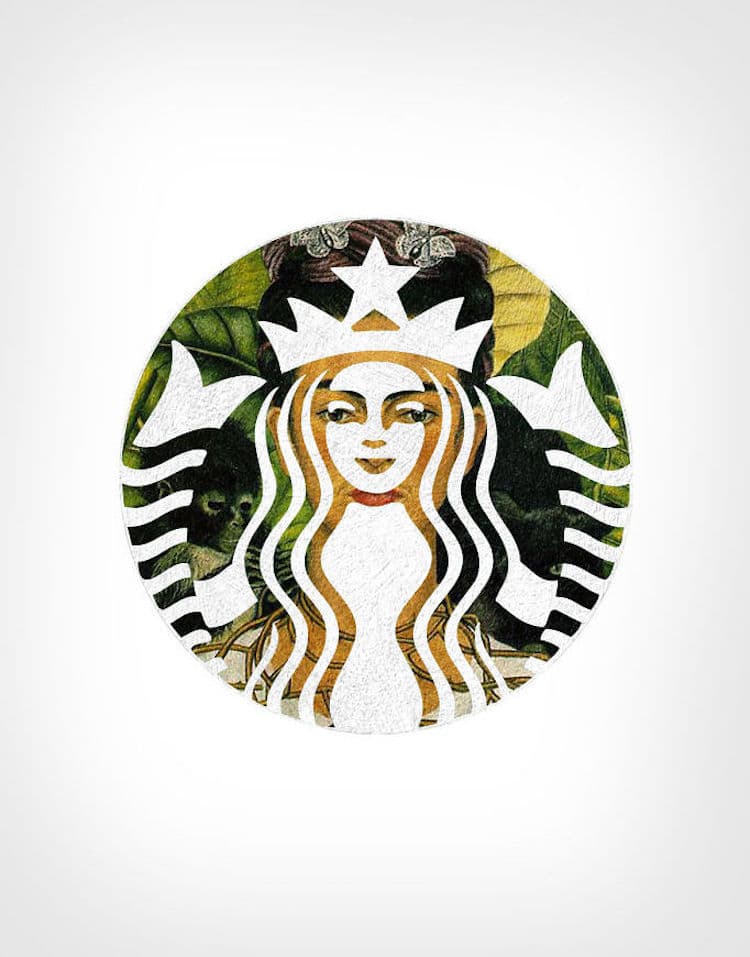 In his Logo + Art series, pop artist Eisen Bernardo overlays famous works of art with stencil-like reproductions of contemporary and commercial symbols. Intended as “an examination of art and consumerism; of expression and function; of personal and corporate,” the digital project cleverly comments on the relationship between iconic iconography of the past and present. In this piece, Bernardo creatively combines Frida Kahlo's Self-portrait with Thorn Necklace and Hummingbird with Starbucks's famed two-tailed siren.

A Singer-Sargent Striking a Pose 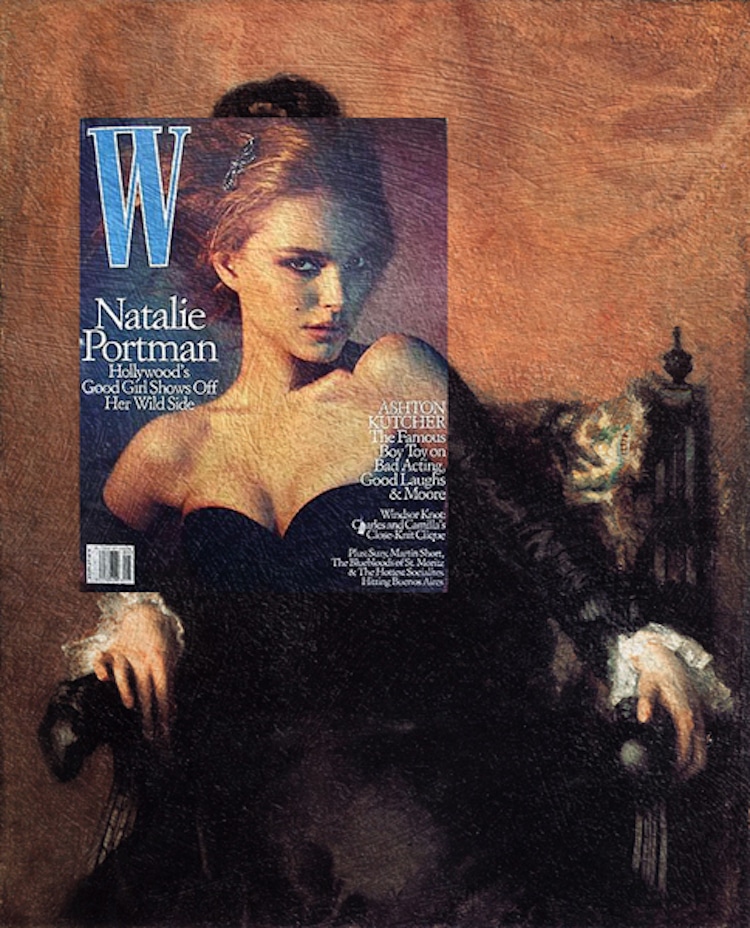 From Metropolis to Museum 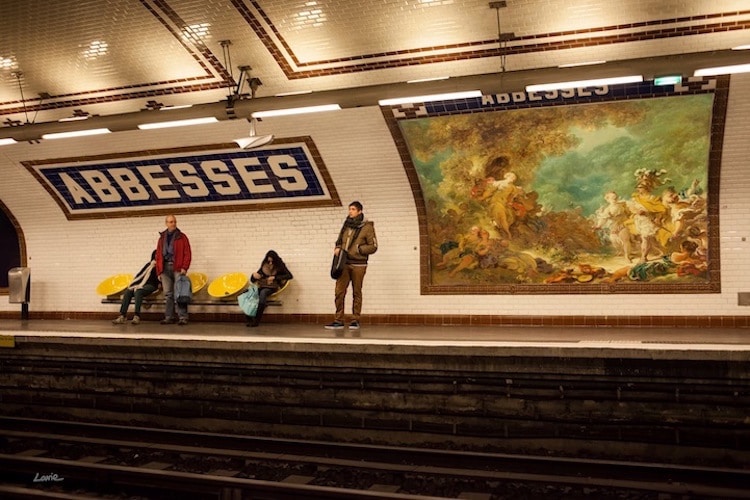 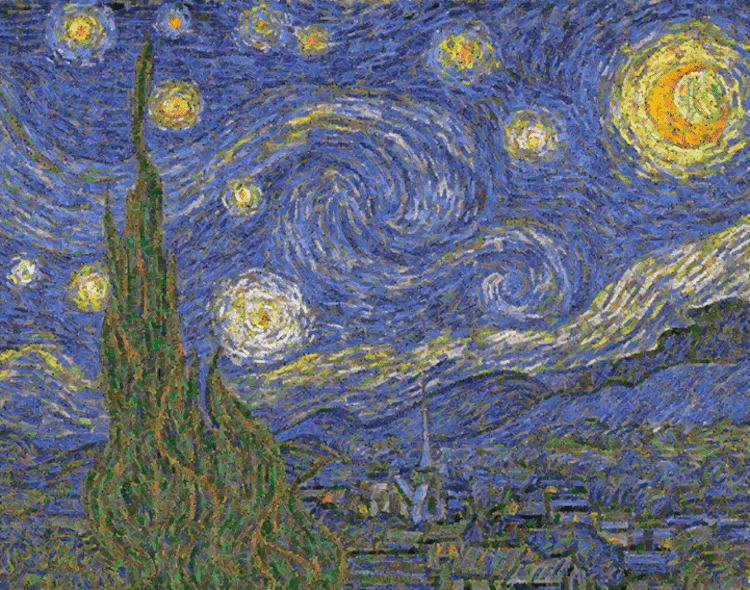 Sometimes, all an old painting needs in order to be modernized is a bit of animation. Specializing in video art, Italian artist Rino Stefano Tagliafierro transforms static works of art into moving masterpieces—a trick that somehow manages to make Bouguereau's Birth of Venus even more ethereal and Caravaggio's David with the Head of Goliath even darker! 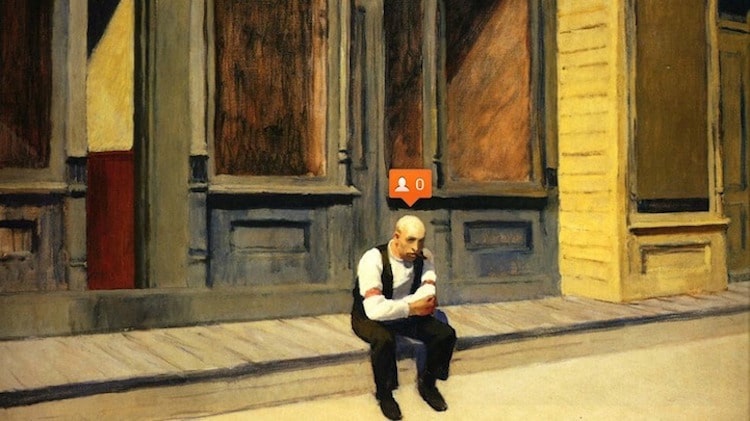 While, during Edward Hopper's life, the world was decades away from social media shares and outlandish emojis, artist Nastya Ptichek proves that his melancholic painting, Sunday, still somehow captures the emotions of the digital age. This cleverly edited image is part of Ptichek's Emoji-nation series. 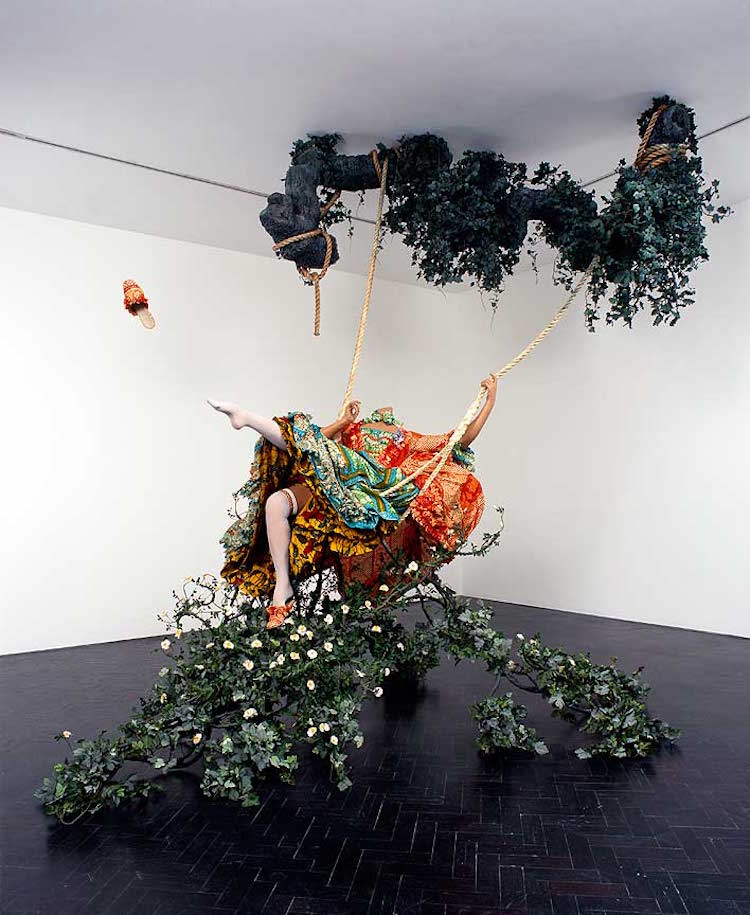 Inspired by the work of French artist Jean-Honoré Fragonard, artist Yinka Shonibare has inventively recreated his most famous piece, The Swing. The Swing (After Fragonard)  Rococo painting, reimagining it as a minimalist and deconstructed installation.

Madonna and Child on the Metro 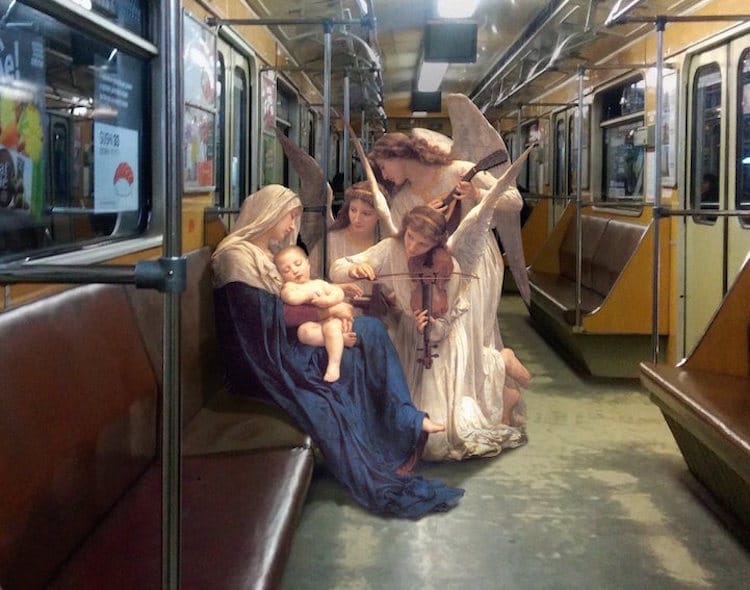 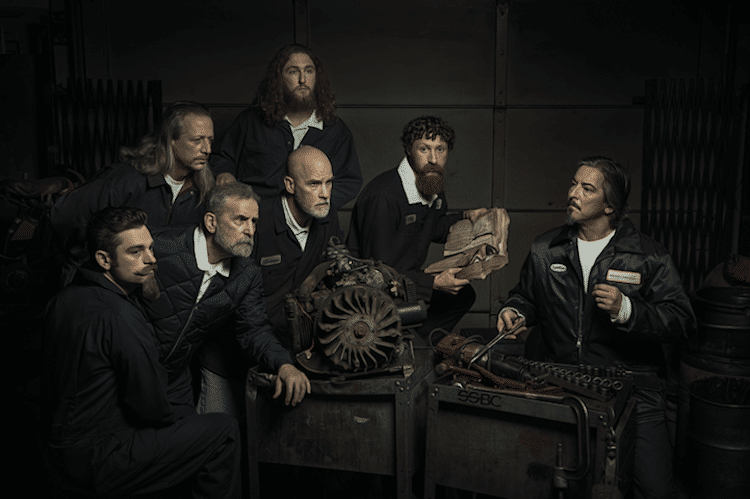 For his Renaissance Series, photographer Freddy Fabris captured a group of mechanics' dramatic yet comical reenactments of master paintings. In each photo, the men creatively mimic the poses and facial expressions of painted figures from pieces like Leonardo's Last Supper, Michelangelo's Creation of Adam, and Rembrandt's Anatomy Lesson, above. They even replace props from the paintings with tools from their garage to give the pieces a fully modern feel.

Brooklyn-based artist Nick van Woert‘s Dissect is a traditional work with a twist. The female figure has been horizontally incised, resulting in fourteen rotatable layers. Additionally, although the sectioned sculpture may look like it's made out marble, it is actually composed of urethane and garbage!

Adam and Eve on the Streets 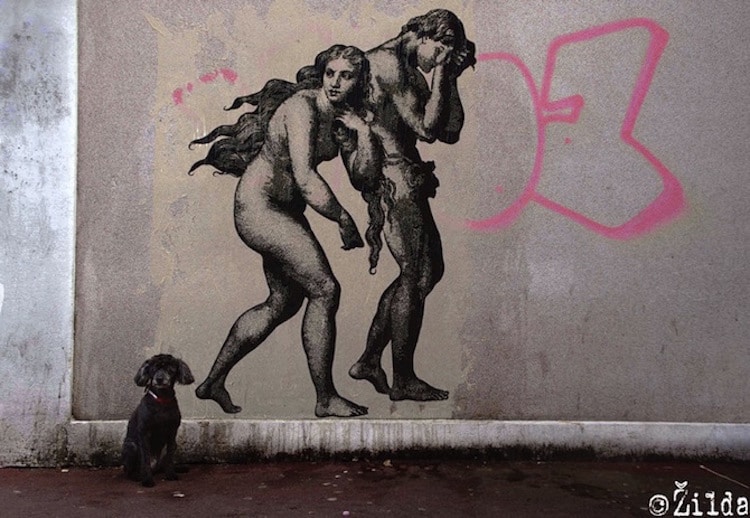 To French street artist Zilda, nothing is more important than connecting with one's surroundings. “It is essential to know the social and architectural stratification of a city,” she explains. “To get familiar with its streets, its quarters, and to view that urban setting as a constraint that stimulates the staging of my ideas.” To engage with her environment, she paints and pastes classical art-inspired images—like the above depiction of the expulsion of Adam and Eve— throughout cities across France and Italy.

Like many of the famed illustrator's magazine covers, Norman Rockwell's The Connoisseur has become a beloved work of art in its own right. Now, thanks to Tumblr, the iconic piece been given the 21st Century treatment; it has been magically transformed into a quirky collection of animated GIFS.