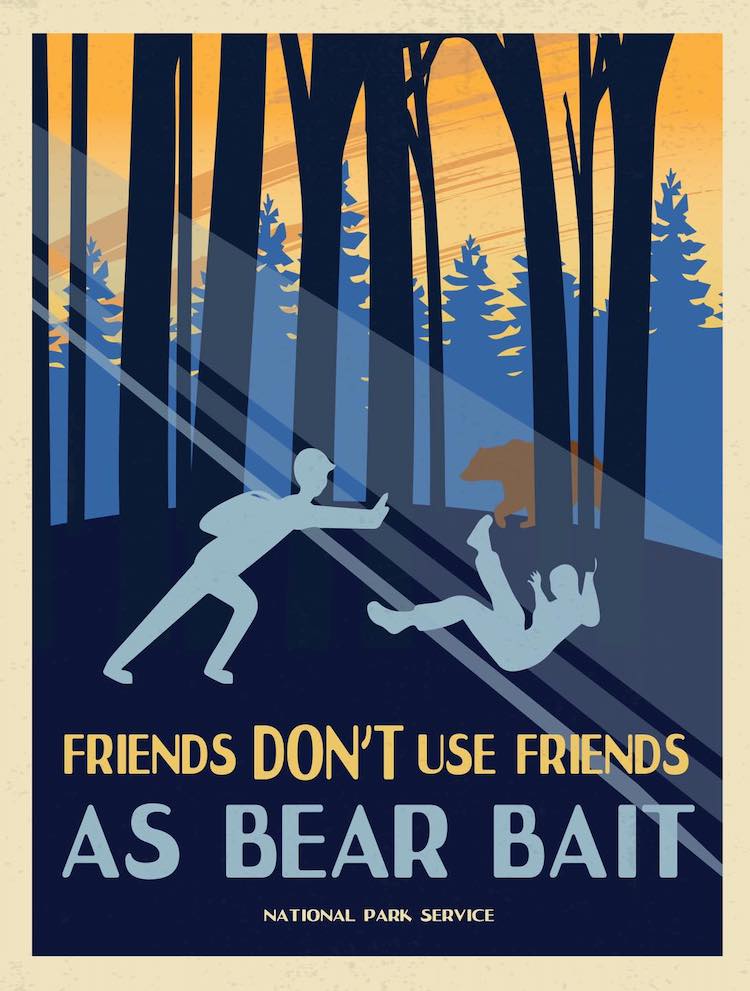 If you're hiking in the woods and you come across a bear, what do you do? You might be tempted to panic and run, pushing your slower friends behind you as an offering to the giant omnivore, but this is not the right course of action. In fact, the bear experts at the National Park Service (NPS) have created a hilarious PSA to make sure you know that this is wrong. The vintage-style NPS poster clearly reads: “Friends don't use friends as bear bait.” It's a clear-cut reminder to hikers to “stay calm and remember that most bears do not want to attack you; they usually just want to be left alone. Don’t we all?”

Bears can be shy just like humans. However, they sometimes approach humans out of curiosity. It is important to stay calm. The NPS advises people to appear as (calmly) “human” as possible by talking. “Move away slowly and sideways” from a stationary bear. Running and tree climbing are both dangerous as bears can pursue much faster than a human can escape. As running is a bad idea, it is not necessary to sacrifice the slowest sprinter in your friend group. Everyone should stay calm and move slowly. Special caution should be taken around mother bears with cubs as they are very protective of their offspring.

If a bear attacks, the appropriate response depends on the type of bear. For brown bears and grizzlies, a hiker should lie face down with hands folded over the back of the neck. Spreading your legs can also help prevent the bear from flipping you over to get at the soft stomach area. If the bear continues its attack (and seems like it wants to eat you), fighting back is necessary. 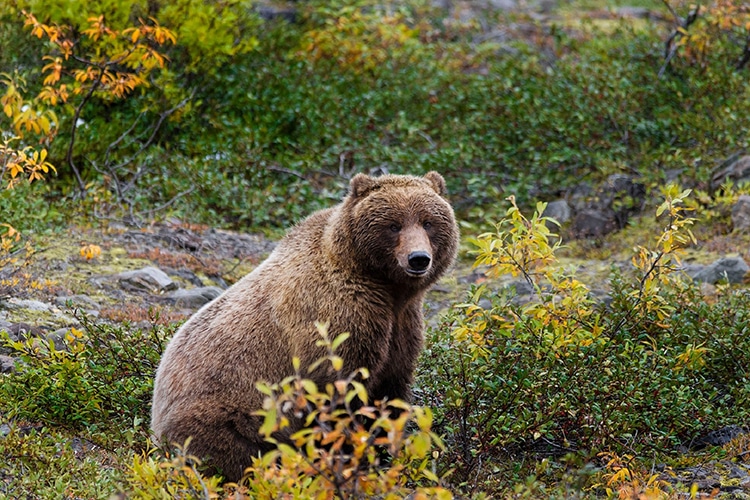 Faced with an aggressive black bear, the best tactic is to first try to reach a car or building. If the bear attacks, fight back and target the bear's face. While this all may sound scary, the good news is bears very rarely “hunt” humans. Their aggression is usually a reaction to feeling threatened. Keeping a safe distance from bears should always be the first step in practicing bear safety. Remind yourself that it's a bear's world, we all just hike in it.

For more safety information regarding bears in National Parks, see the National Park Service website. For more “beary” good content, follow the National Park Service on Instagram and Facebook, where the NPS is known for using sassy puns and witty commentary to promote wilderness safety and preservation. In particular, be sure not to miss their annual fall bracket of grizzly bears packing on the pounds for winter hibernation!

Bears usually keep to themselves in the wild, but they can be curious about humans. 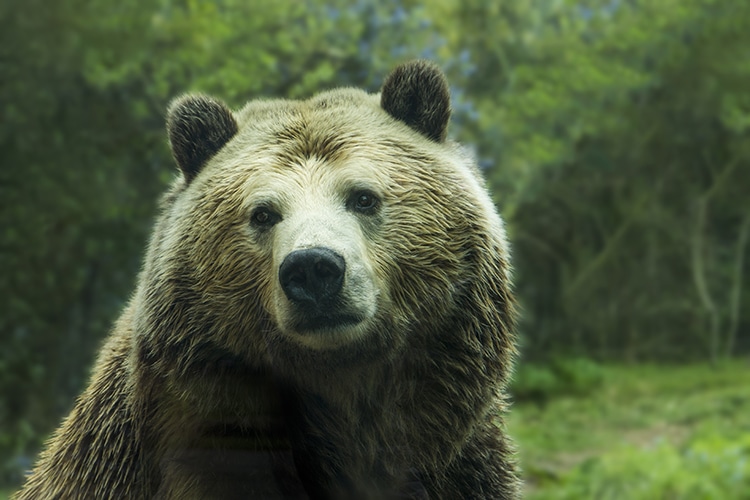 Here's one curious bear hovering around a group. Luckily, the humans knew to stay still.

Never try to escape a bear by climbing a tree. They are expert climbers. 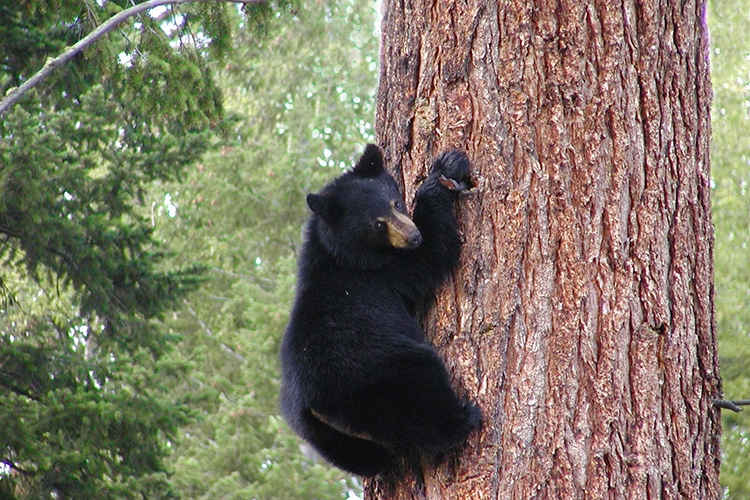 Another NPS bear safety tip: give extra space to any mothers with their cubs! 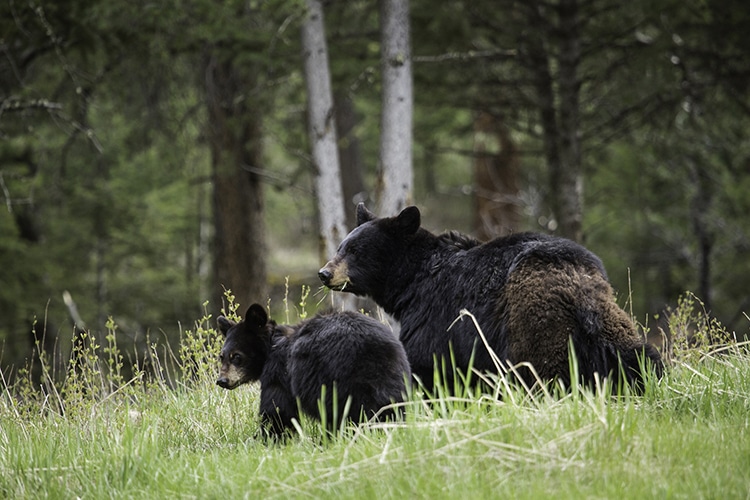 Follow the National Park Service for more bear safety tips and to watch bears put on weight for the winter. 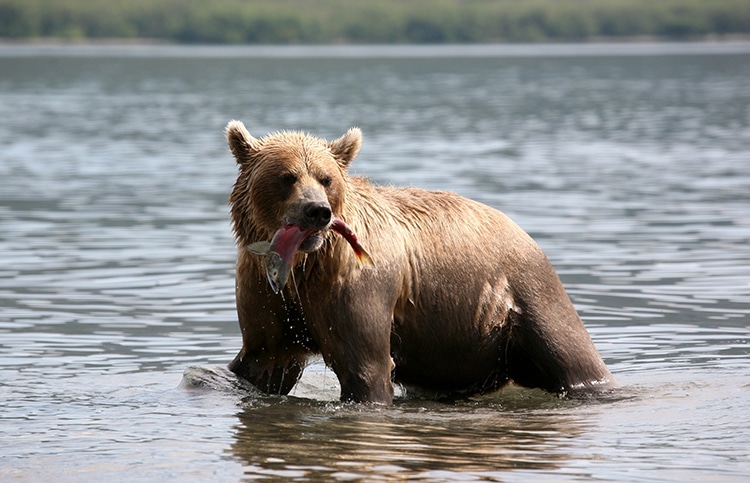