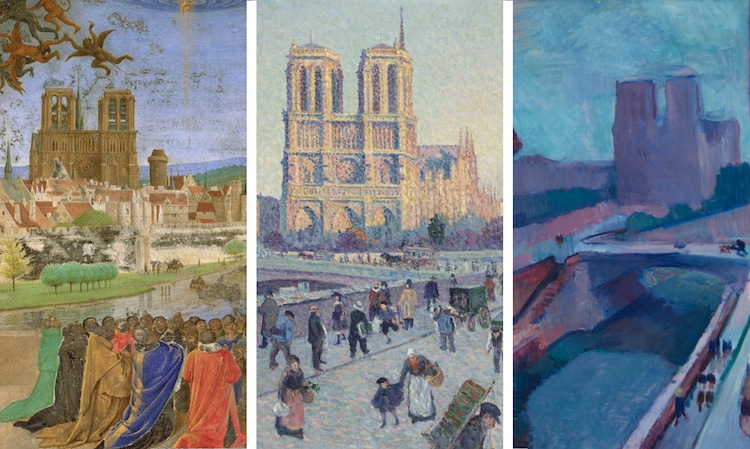 Notre-Dame Cathedral is one of Paris' most important monuments. Completed with much fanfare in the middle of the 14th century, the fantastic Medieval cathedral has served several purposes during its 850-year history.

As the seat of the city's archbishop, Notre-Dame is Paris' premier Catholic Church. However, as a gem of Gothic architecture famous for its sky-high stature, enchanting collection of gargoyles, and beautiful rose windows, the cathedral's cultural significance transcends religion—making it a perfect muse for all kinds of creatives.

Here, we take a look at some of the artists who have turned to the cathedral for inspiration, from a manuscript illuminator who worked during the Middle Ages to one of the world's most famous modern artists. 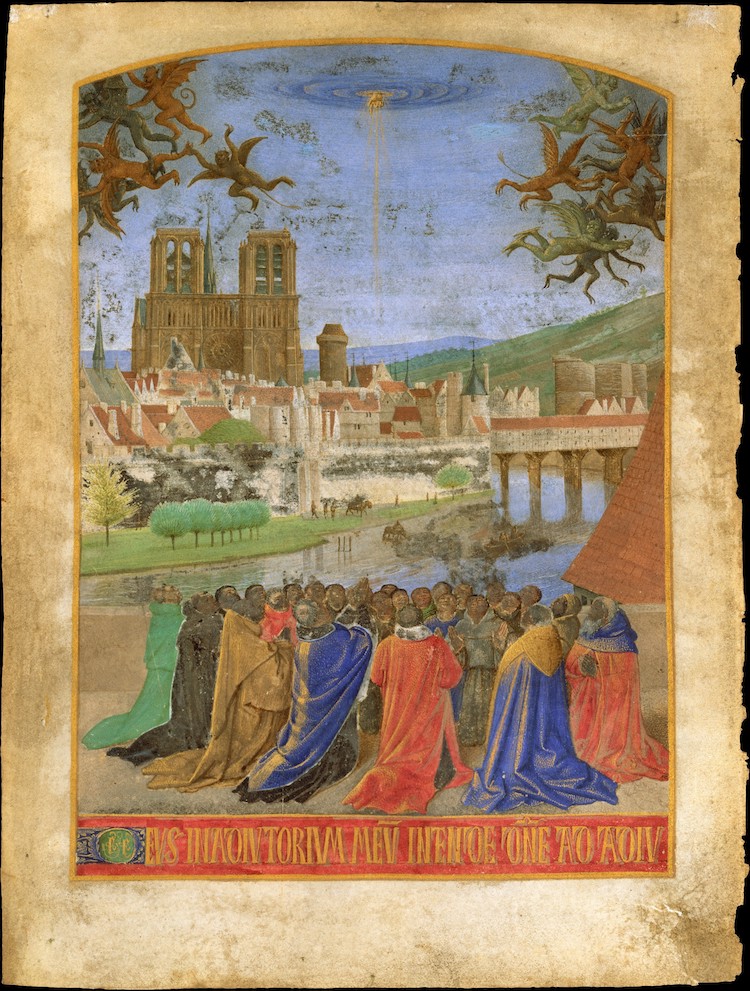 Jean Fouquet, “The Right Hand of God Protecting the Faithful against the Demons,” ca. 1452–1460 (Photo: The Metropolitan Museum of Art Public Domain)

In medieval Europe, artists mostly employed religious iconography in their work, which materialized as three art forms: altarpieces, panel paintings, and illuminated manuscripts. Jean Fouquet, a 15th-century French artist, mastered all three, making him one of the Middle Ages' most preeminent painters.

Fouquet is known for his attention to detail—a skill that is particularly evident in The Right Hand of God Protecting the Faithful against the Demons. Measuring just over 7 by 5 inches, this excerpt from the miniature Hours of Étienne Chevalier shows a “topographically accurate depiction of medieval Paris” dominated by a then-115-year-old Notre-Dame Cathedral. 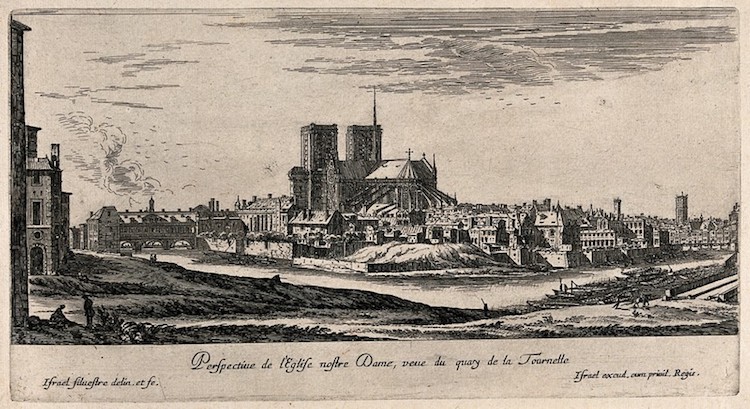 In the 17th century, Israel Silvestre served as the draftsman and engraver of the French king. Based in a workshop in the Louvre, one of Silvestre's royal duties was to document sites in and around Paris.

By the time he died, his body of work included over 1,000 engravings. While most of these pieces showcase views of the Palace of Versailles and other regal areas, Notre-Dame Cathedral also made an appearance on more than one occasion. 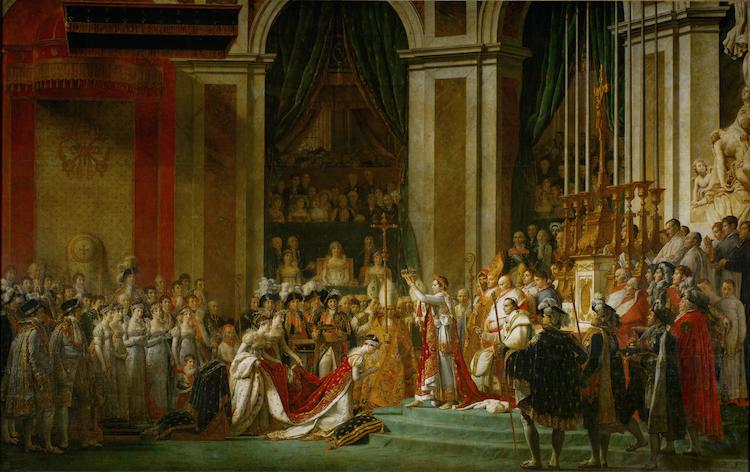 Though the majority of artists featured Notre-Dame's famous façade in their work, Jacques-Louis David found inspiration within its walls. In Coronation of Napoleon Bonaparte, a large-scale painting from the Neo-Classical period, David documents one of the cathedral's many important events: Napoleon's sacred crowning.

Commissioned by Napoleon himself, the piece showcases the lavish nature of this over-the-top ceremony, which was intended to commemorate the military leader's transformation into a God-sent emperor of France. 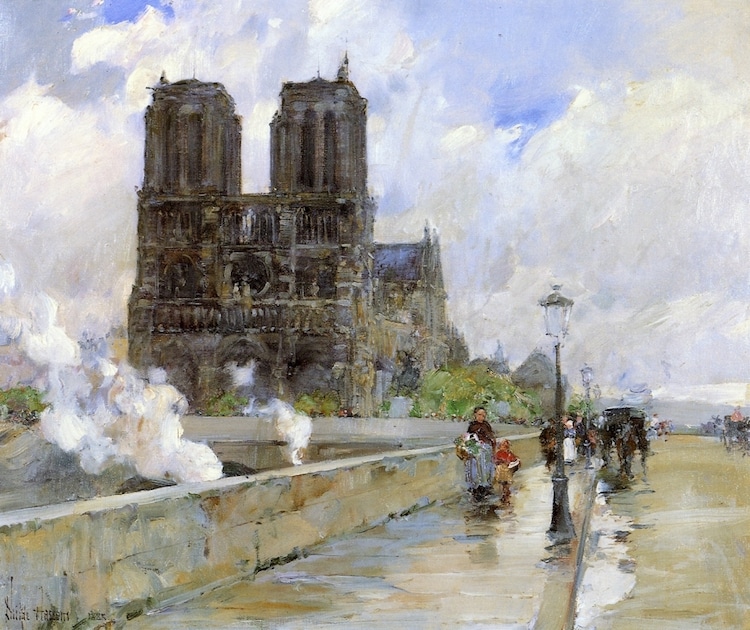 In the 19th century, Impressionism emerged in Paris. With a focus on capturing fleeting “impressions” of their surroundings, Impressionist artists often documented daily life in their paintings. While many of the works produced during this time are set in the idyllic French countryside, American Impressionist and avid traveler Childe Hassam often looked to city life for inspiration, culminating in lively paintings like Notre Dame Cathedral, Paris. 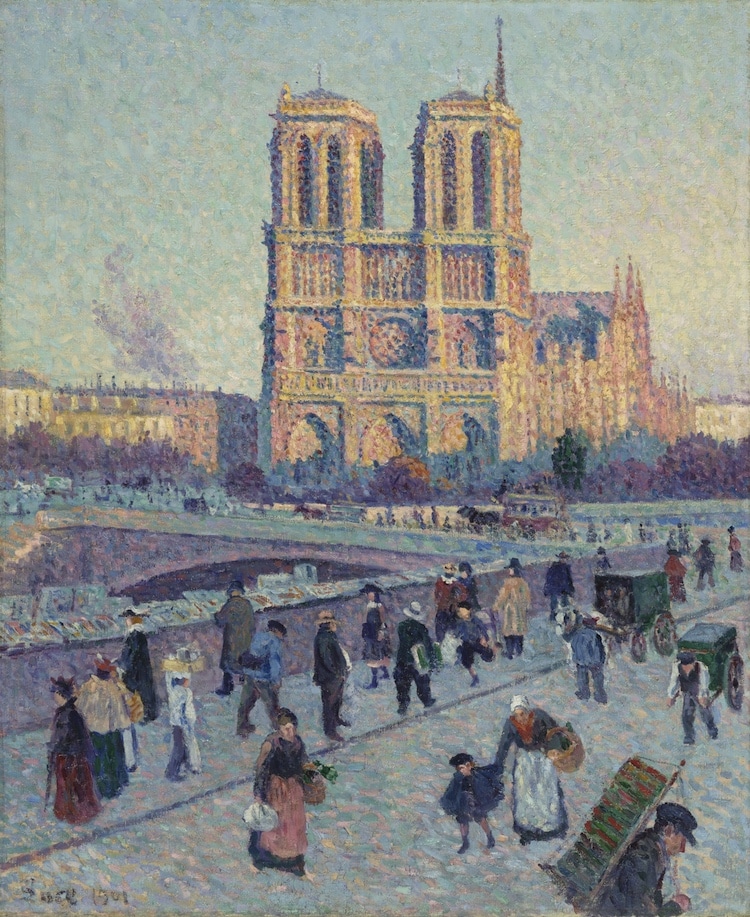 Pointillism, a style of painting characterized by small, colorful dots, made its grand debut in 1886. While the movement is most famously associated with pioneers Georges Seurat and Paul Signac, they are not the only artists who mastered the technique.

Maximilien Luce, for example, excelled as a Pointillist. The Paris-based painter's eye for detail and cohesive use of color is particularly evident in his Notre-Dame series, comprising works like The Quai Saint-Michel and Notre-Dame and Notre-Dame de Paris—Luce's highest-selling painting to date. 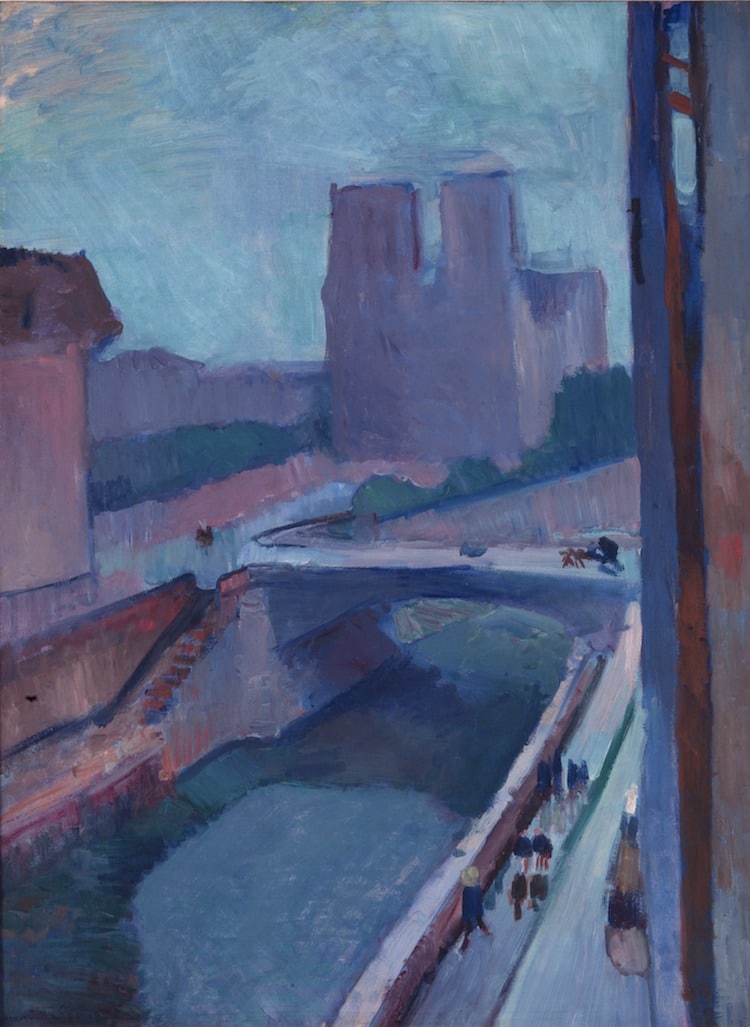 At the turn of the 20th century, modern art master Henri Matisse produced several paintings of Notre-Dame Cathedral—a landmark he was lucky enough to see from his Parisian studio. His depictions of the church and the surrounding quay vary in style, including an Impressionist rendition, an avant-garden abstraction, and the Cézanne-esque Glimpse of Notre Dame in the Late Afternoon.

The majority of paintings by lifelong New Yorker Edward Hopper explore the reality of modern life in the major American metropolis. However, early in his career, Hopper found inspiration in Paris, a city he described as “almost too formal and sweet to the taste after the raw disorder of New York” (Edward Hopper: An Intimate Biography).

His idyllic perception of Paris is evident in Notre Dame de Paris and other paintings produced between 1906 and 1910—a period in which he made several trips to the French capital.

Though born in Spain, Pablo Picasso spent most of his 79-year career in France. Like many of his modernist peers, he split his time between the sun-soaked South of France and Paris, where he painted Notre-Dame de Paris in 1954.